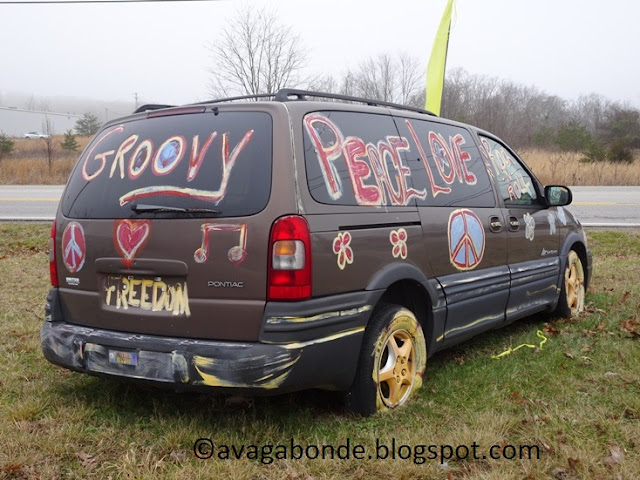 A couple of days ago it was time again to drive to Georgia.  The only part of the trip I stress about is going through the mountains in Tennessee on U.S I-24; mostly the notorious portion that goes over Monteagle, TN.  It is considered to be one of the most dangerous sections of interstate highway in the US.  You have to climb up as your ears close from the height, and then the long dangerous downgrade begins with 18-wheeler trucks all around you - and your stomach is fluttering under the strain.  Damages on the median barrier show that many vehicles have experienced problems.  Tough truck drivers avoid the Monteagle mountain stretch and call it a "white-knuckle" highway.  Country singer Johnny Cash had a song about it "Your life is in your hands when you start down that long steep grade on Monteagle Mountain," and so forth.  The scenery is gorgeous is you are a passenger and able to look at the icy rocks, the lovely waterfalls and way down in the valley.  As a driver my eyes are glued on the highway, hoping for no brake failure happening on a large truck but knowing that it did happen by the marks left on the runaway truck ramps on the side of the road. 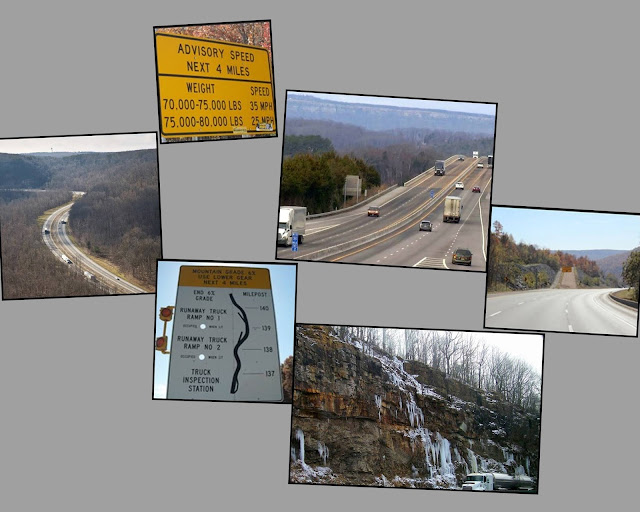 Usually I stop at the South Pittsburg rest station a few miles past Monteagle, as I have shown on my posts before, but this time I decided to stop first in rural Monteagle, where I had never been.  "Keeping by the main road is easy; but people love to be sidetracked."  Lao Tzu (570 BC-490 BC, Chinese philosopher.)  Because of the elevation it was cold and also quite foggy.  I stopped at a shop called "The Amish Hippie" on Monteagle Main Street.  (Click on collage to enlarge.) 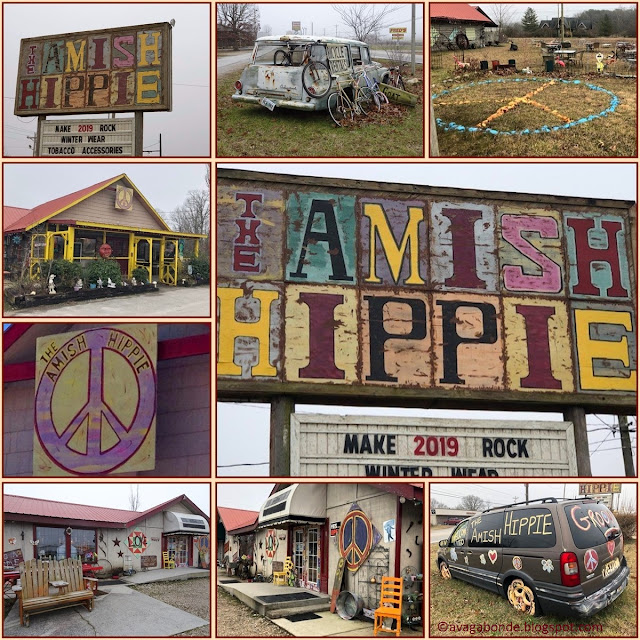 Inside it was a bit warmer, with a whiff of incense in the air.  A young woman, covered in several layers of sweaters, greeted me.  She invited me to look around and then asked me if I was German - wrong! (because of my accent.)  I walked slowly around the store, looking at the eclectic merchandise.  There were Amish jams, honey, jellies, creams, homemade toys and some vintage items scattered all around.  Rock music was playing. 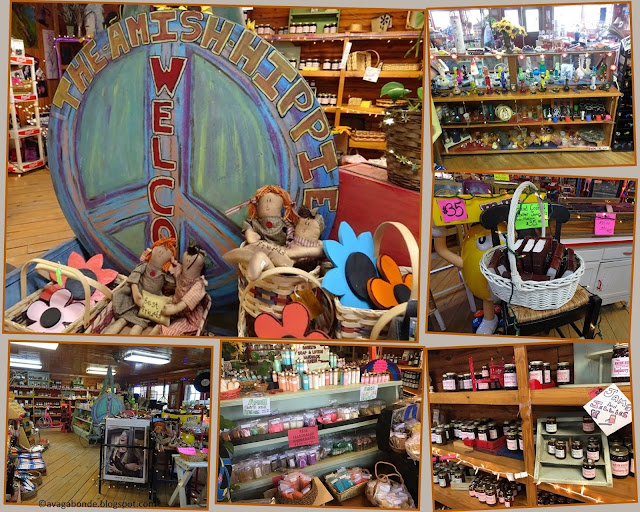 The other two rooms had a mixture of tobacco paraphernalia, hookas, jewelry, souvenirs, dyed clothing, tee shirts, capes, sweaters and more.  The walls were covered with hippie photographs, rock stars of the 60s and 70s, and peace symbols. 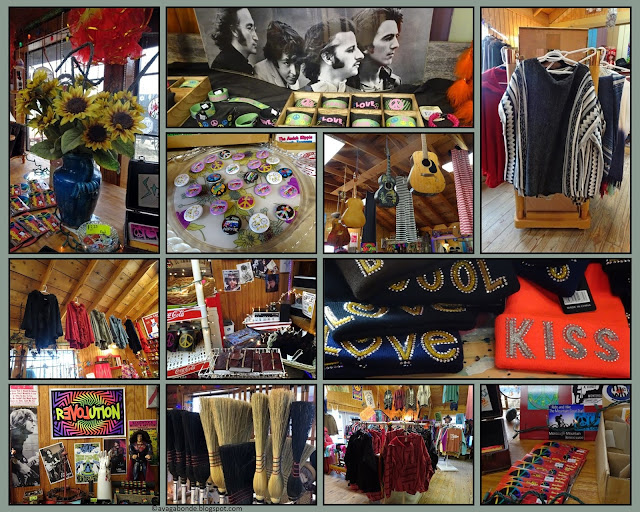 Back outdoor, it was still cold.  I walked around taking pictures of old cars, yard ornaments, and assorted eccentric items.  The store offered coffee - there were some old tables and chairs outside but uncomfortable looking, even in summer. 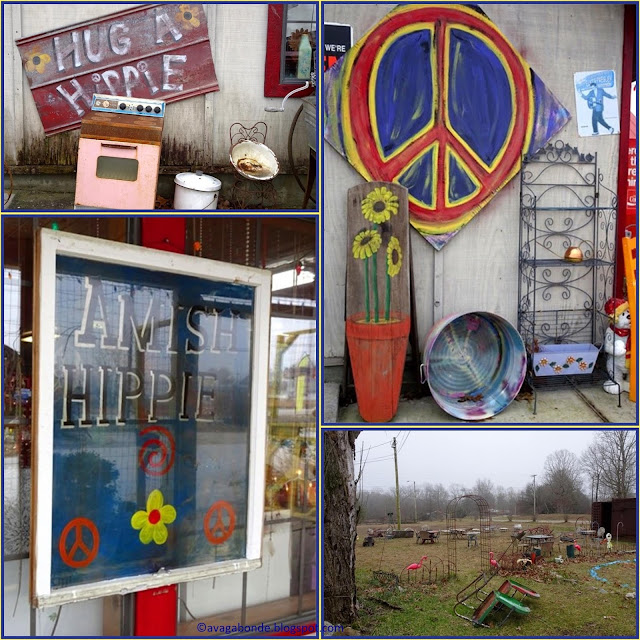 As I drove away I remembered a poster I saw in the store, "The Wall" an album by the rock group Pink Floyd.  Pink Floyd was an English rock band of the 1960s with psychedelic music, sonic experimentation and philosophical lyrics. 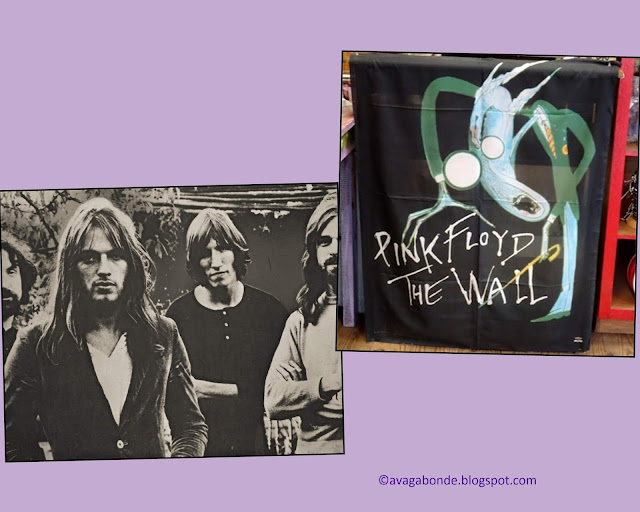 The word wall in French is mur, le mur.  That word reminded me of something.  Yes, that's it; it was a book I studied in college Le Mur by Jean Paul Sartre.  J.P. Sartre (1905-1980) was a French philosopher, novelist, playwright, political activist and more.  He is one of the best known French 20th century philosophers, a leading figure of the existentialist movement.  He wrote this book of short stories in 1939.  It included the story Le Mur set during the Spanish Civil War.  It was about prisoners condemned to death, not a fun story.  It depicted a wall separating life from death, the living from the condemned and represented brute matter.  I have this paperback in French on one of my bookshelves still. 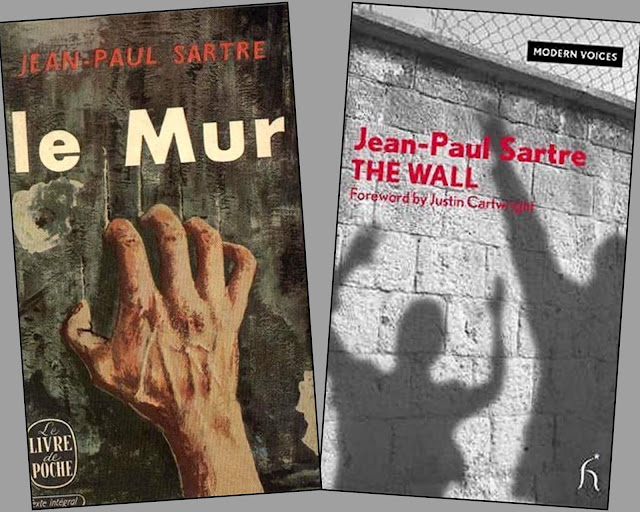 I stopped at the rest area for my small lunch and then back on the road for the almost 3 hours of driving left and much time to think.  My mind returned to the wall.  I walked on several old walls, ramparts actually, such as in Dubrovnik, Croatia, began in the 8th century and the ramparts in Lucca, Italy.  In France as well there are so many small villages to large fortified cities with heavy walls or ramparts.  I'll show several below. 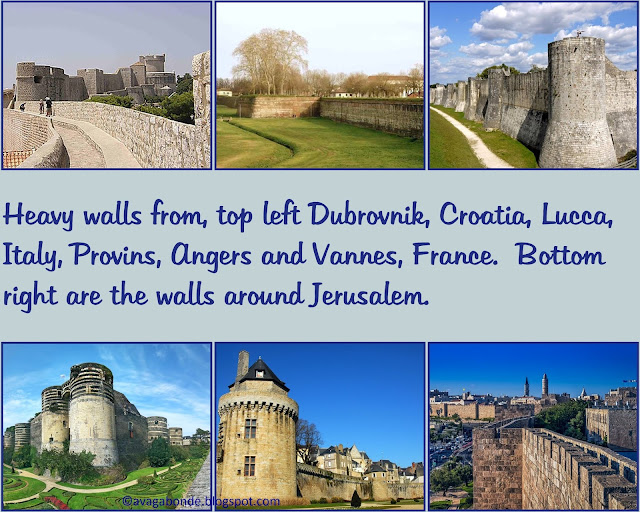 These fortified walled cities were built centuries ago for protection, with watchtowers for observation against any attack.  During the day the gates were opened to welcome anyone looking for refuge.  Still these walls were breached numerous times such as during the Crusades (conquest of Jerusalem in 1099.)  For protection I guess I could have a wall built around my house in Georgia like in medieval times, but I prefer using an electrical security system with motion sensors and cameras, because this is available in the 21st century, you see.  This brings me to President Trump's wall on the southern border with Mexico.  Even a republican, Will Hurd of Texas, said that a border wall strategy is ancient and borders can better be protected with drones, satellites and aerial reconnaissance (his district includes 820 miles on this border.)  I also found out that even though D. Trump said 4000 known or suspected terrorists were stopped at the border, the number was only 6 people (4000 was the worldwide number) and 91 people were stopped at the US-Canada border.  So, the wall should be at the Canadian border?  The State Department said that there is "no credible evidence that terrorists enter through the southern border."  In fact they come through entry points airports.  I enjoyed the cartoon below from Marian Kamensky. 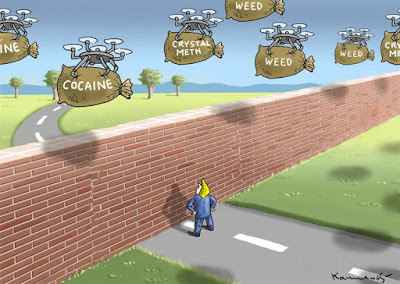 U.S Border Patrol reports "Apprehension of people trying to cross the southern border peaked most recently at 1.6 million in 2000 and have been in decline since, falling to just under 400,000 in fiscal 2018."  This is not an emergency.  Actually, Germany which is a tiny country compared to the US, gets about 722,000 asylum seekers.  But there is an emergency and that is to send all the government employees back to paid work.  My daughter was at La Guardia Airport in New York 3 days ago trying to fly back home to Pennsylvania.  After waiting several hours because of the weather the passengers were told to just board the plane with their hand luggage as there were no TSA employee available.  They went on without taking their shoes off, or anyone checking their luggage or themselves, just like we did in the 1990s.  Bewildering!  I need to stop thinking about walls.  Still I'd like to return to Carcassonne in France with my camera as I only spent 3 days there with my film camera.  It is the largest city in Europe with its walls still intact, built in the 12th century.  Below are an ancient engraving and a modern aerial view of the city. 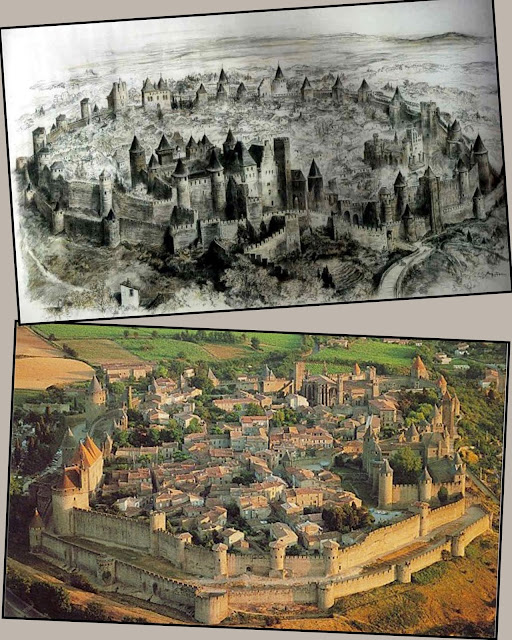 I have been busy clearing out my youngest daughter's bedroom.  After she left for university years ago the room was mostly used as a closet and was packed full.  I am slowly tidying it but stop sometimes to look and take pictures of what I find.  For example the Raggedy Ann dolls, shown below.  She says she does not want them for the granddaughter.  What should I do?  Give them to the Goodwill I guess. 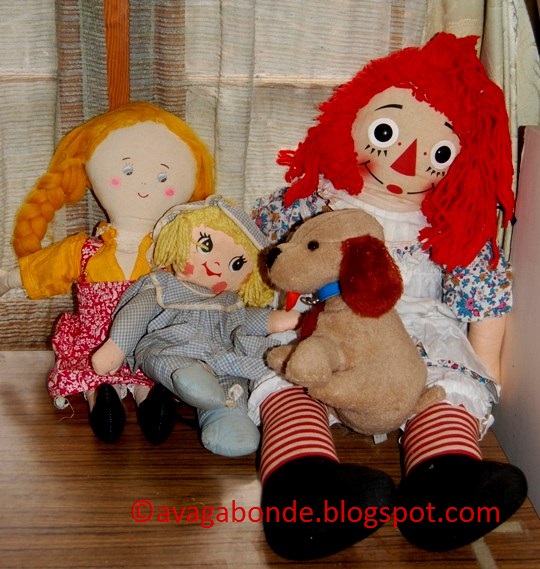 There were more packages of old photographs and vintage postcards.  I had found some earlier and just took them to Nashville without looking but this time I stopped to take a look at them, not all, just several.  Unfortunately the photos were not dated.  I know though that the pictures of New York were taken near Ground Zero about 4 weeks after 9/11/01 when I flew there to bring support. 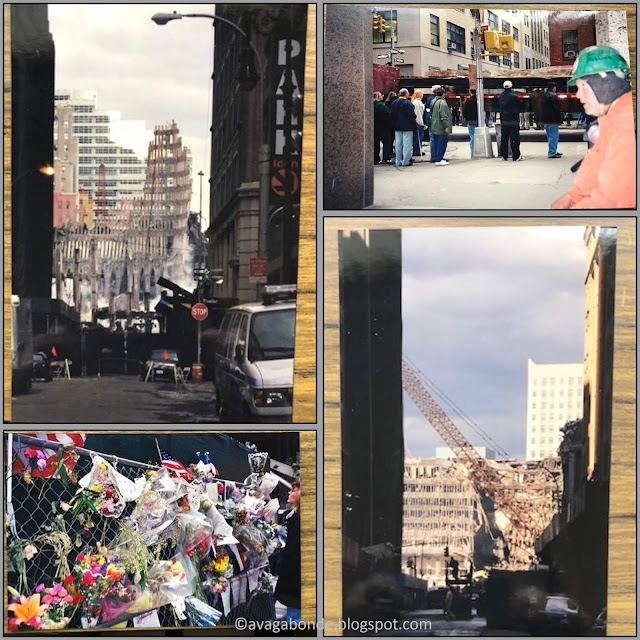 I'm not sure of the date of the photos below.  On top left I was taking a group of aeronautic trainees,
Chinese and Saudis, on an excursion in Chicago, IL.  Next is my eldest daughter in Paris in winter.  Below is my daughter at my French cousin for lunch and her "plateau de fromages" (cheese tray) she had gathered for us. 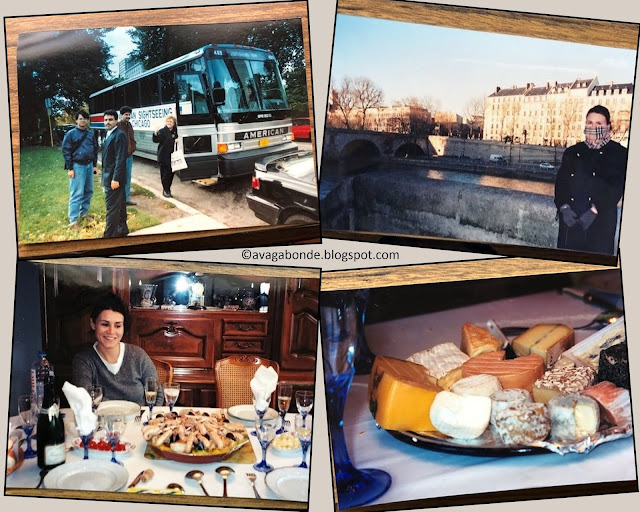 I also took photos of several vintage postcards.  Below is an old (1903) postcard of Queen Victoria, who had died in 1901.  Next is the family of Tsar Nicholas II of Russia with St. Petersburg below. 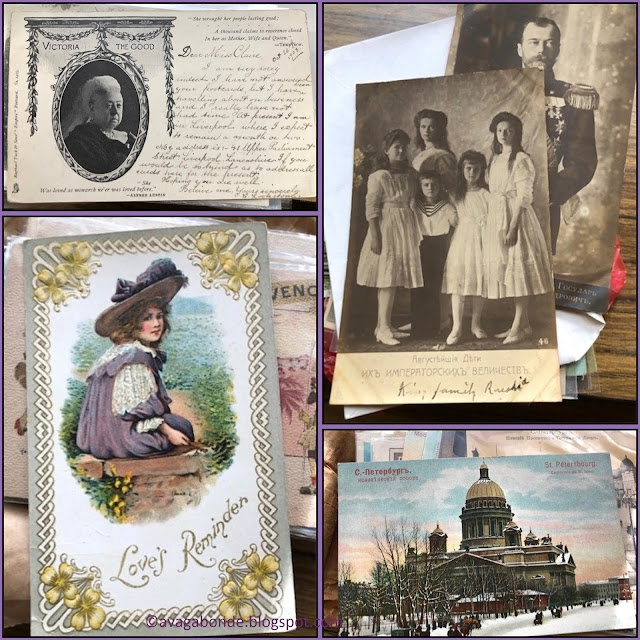 Every month I used to go to the Scott Antique and Flea Market at the Atlanta Lakewood Fairgrounds with a friend.  There were several booths then of vendors of vintage postcards.  One of them used to offer old photographs, for 50 cents or so.  I did buy quite a few - loved the hats! 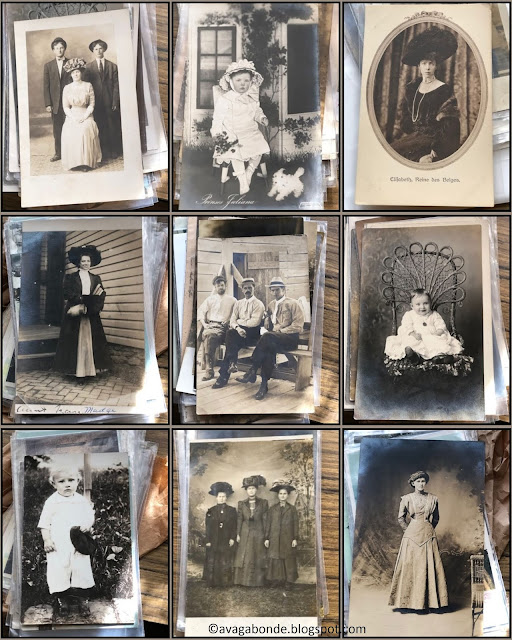 I have to stop all this and get back to work.  Although after a while it gets tiresome to constantly clear up, clean up and gather up to give away.  I went out to look at the wind in the trees.  You can't see from the pictures below, but the wind was moving the pine trees back and forth. 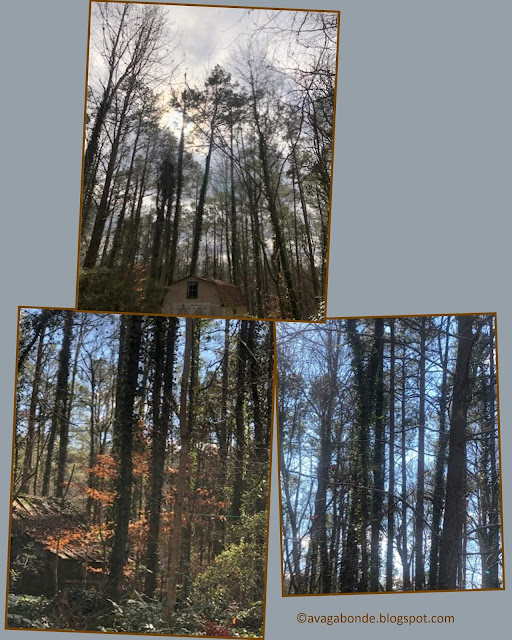 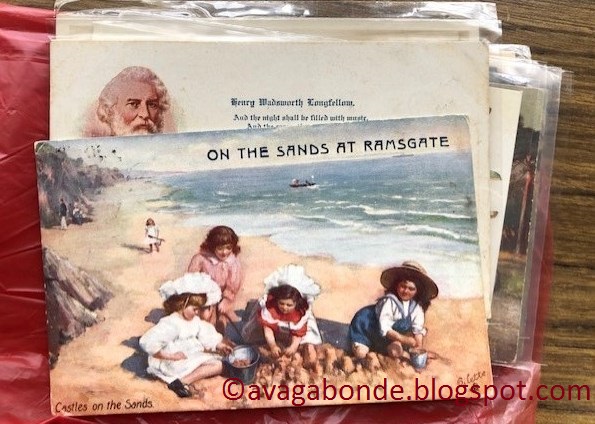