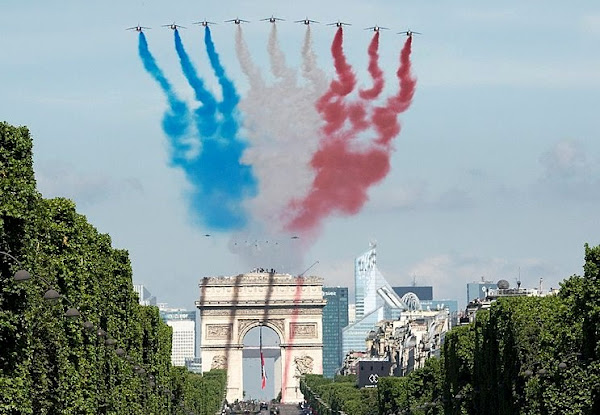 The Patrouille de France (French Acrobatic Patrol) of the French Air Force is shown above. It has been active since 1931 and is one of the oldest and considered one of the best in the world. It traditionally opens the military parade in Paris on the 14 of July /French National Holiday (also known as Bastille Day in anglophone areas.) Then about two weeks later, it flies over the Champs-Elysees Avenue at the close of the Tour de France. Nine pilots fly the Dassault/Dornier Alpha Jets with a team of 32 mechanics for support. 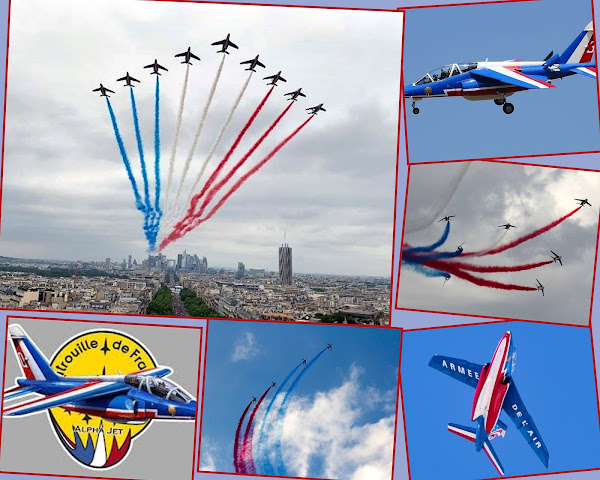 A 14 of July military parade down the Champs-Elysees Avenue in Paris has been a tradition since 1880. The parade starts at 10:00 am and lasts two hours. This year's theme was "Sharing the Flame" - a reference to the flame of the Resistance, and to the Olympic flame of which France is now the custodian until the Olympic Games in Paris in 2024. Olympic and Paralympics' medalists were part of the procession. This year French President Macron wished to honor Eastern European nations and invited their troops to open the parade (photo shown below courtesy Ministère des Armées.) The units and flags of the Baltic States, Poland, the Czech Republic, Slovakia, Romania, Bulgaria and Hungary opened the parade with troops on foot, followed by the soldiers of the French regiments engaged within the framework of NATO on the eastern flank of Europe, such as the alpine hunters deployed in Romania and Estonia. (France's Rafale fighter jets are also helping to protect the Polish sky.) 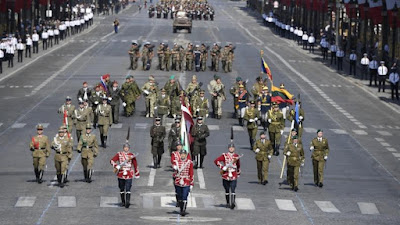 The parade included 6,300 soldiers on foot, 71 aircraft, 25 helicopers, 221 vehicles and 200 horses of the Republican Guard. Louis, a 17 years old ship's boy and future ship's mate, was the youngest soldier in the parade. He is pictured below, courtesy Le Ministère des Armées. 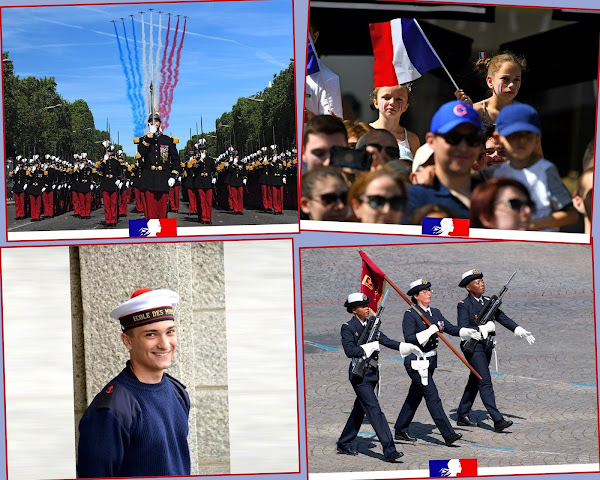 In the evening of July 14, Parisians, French people and foreign visitors were invited to gather near the Eiffel Tower to watch the fireworks at 11 pm, for about 30 minutes. The theme this year was "Carpe Diem" (seize the day - take advantage of life.) The fireworks paid tribute to Ukraine, projecting the Ukrainian flag on the Eiffel Tower, the blue and yellow rockets drawing hearts in the sky, on the song "Stefania" by the Ukrainian group Kalush Orchestra, winner of the Eurovision contest. (Photo of the Ukraine colors in the first left photo below, courtesy Le Parisien.) This was followed by a public concert then popular dancing in various streets. 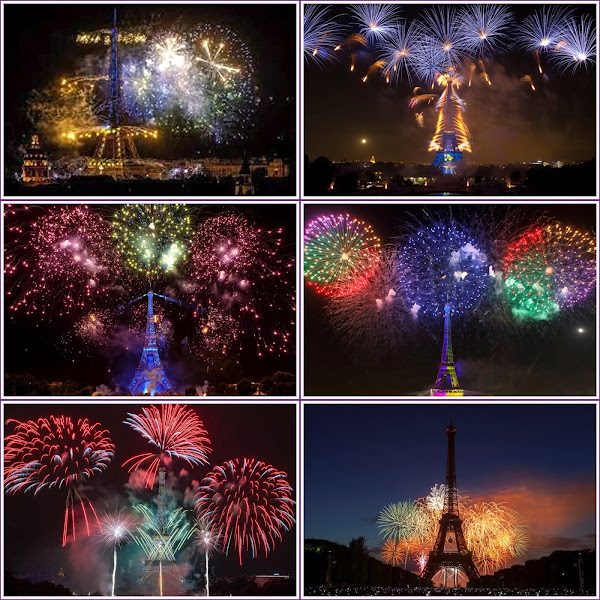 Most large towns, small cities and villages in France display fireworks for the national holiday, the 14 of July. However, this year to minimize the risk of fire linked to the ambient dryness and extreme heat, some municipalities canceled their traditional fireworks. One of the cities still with great fireworks was Carcassonne, shown below, courtesy Aude Tourisme. The Tour de France stopped to rest in this town, but on July 18, 2022. 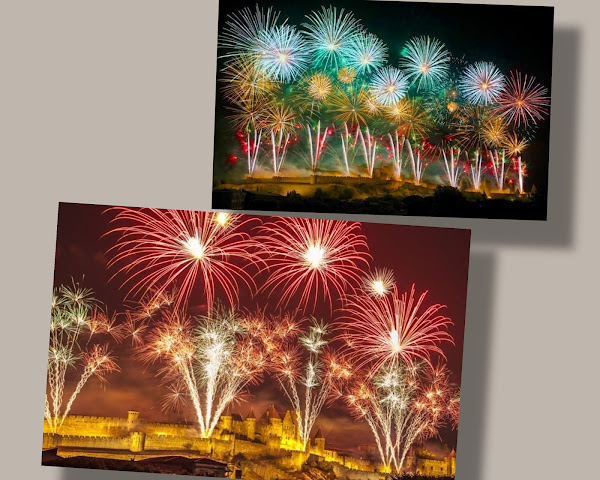 The Tour de France 2022 started on July 1st and ended on July 24, 2022, including two rest days. It covered a total distance of 3,328 kms/2081.4 miles, about the same distance as Helsinki, Finland to Lisbon, Portugal or Washington, D.C. to Las Vegas, Arizona. There were 176 international riders from twenty-two teams (8 riders in each team.) The 21 stages covered 6 flat stages, 7 hilly stages, 6 mountain stages and 2 individual time trial stages. Apart from France the Tour visited 3 foreign countries, Denmark, Belgium and Switzerland. The cyclists rode into 39 stage towns. The Tour attracted 12 million spectators and was broadcasted into 190 countries. Founded in 1903, the Tour de France is the most prestigious bike race on the planet. Below is the 2022 route. 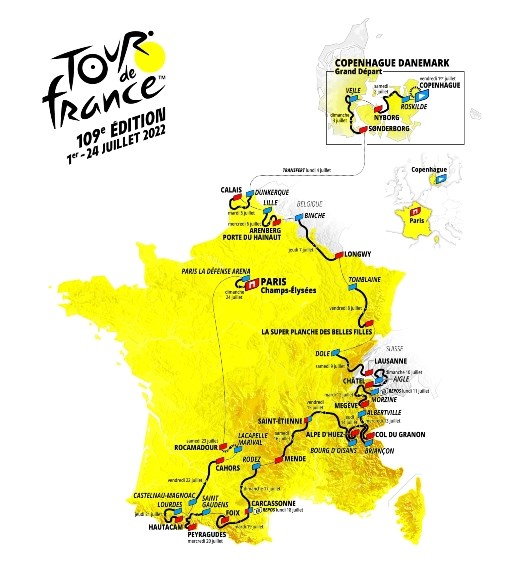 If you click on the Tour de France link on the right side of my blog you will see 21 entries. Along the years I have given the Tour's history, explained the stages, the colors of the jerseys and more. Please check any of these posts. It is quite fitting that the Tour started in Copenhagen, Denmark. Copenhagen is the world's most bicycle friendly city where the number of bicycles outnumbers the number of cars. If the US is known for having more guns than people, Copenhagen is known for having more bikes than people - 745,000 bikes for 602,000 people, and just 120,000 cars; the number of SUV vehicles, unlike in the US, is at a minimum. The first time we were in Copenhagen we stayed in a central hotel. I was so surprised to see more bikes during rush hour than cars, with business people in suits and some women in dresses and heels. 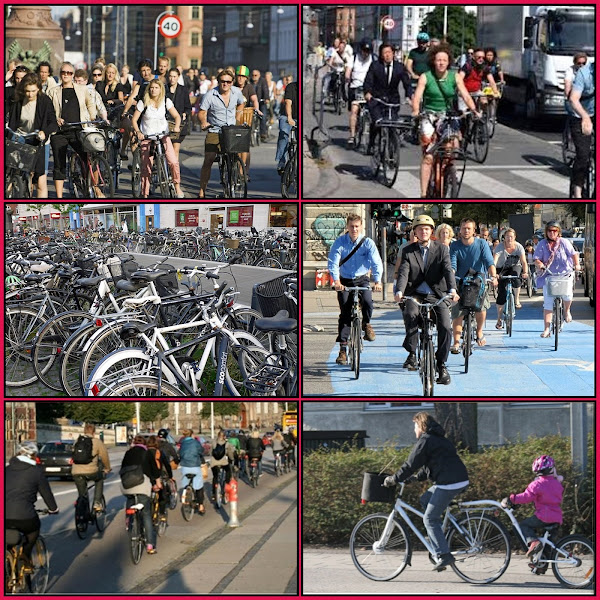 Accordingly, the Climate Change Performance Index's for 2022 shows Denmark as the top-ranking country in the world for global climate policy. Out of rankings of 60 countries and the EU, the US trailed the pack in 55th place. It could be the US's obsession with SUV vehicles. On average, SUVs use about a quarter more energy to move than a standard-sized family car, because they are larger, heavier and create more drag. A quarter might not sound like much, but between 2010 and 2018, the proliferation of SUVs on the road resulted in an increase of 3.3 million barrels of gasoline used per day. This created an uptick of 0.55 gigatons of CO2 over one decade, to 544 million tons of CO2, making SUVs "the second-largest contributor to the increase in global CO2 emissions since 2010 after the power sector." To put it another way, it means SUVs are producing more emissions than the entire aviation industry. The IEA forecasts that if conventional SUV purchases continue at the same pace, by 2040 they will have offset the emissions savings of close to 150 million electric cars. But, in the US, SUV sales continue to grow regardless. In Denmark there are twelve freeways just for bicycles. 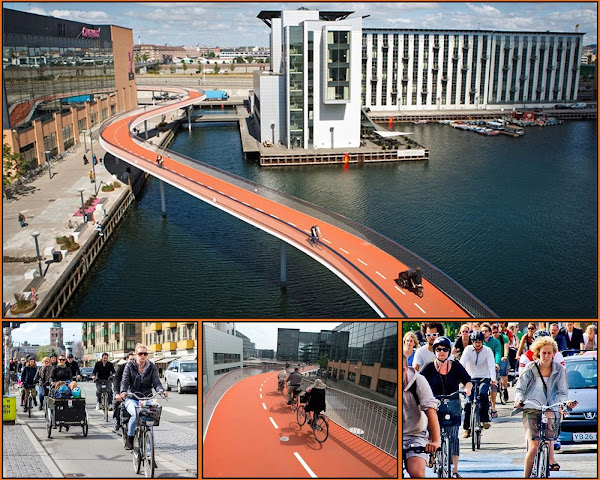 The Grand Depart started in Copenhagen and stayed three days in the country. Fans came out to cheer the Tour in incredible numbers - thousands in every town. The Tour is truly international. One of the reasons I really enjoy it is because fans cheer the racers regardless of their nationalities. Of course I am happy if a French or American racer wins a stage but I am as happy to see a deserving racer win from another country. It was so sad at the Atlanta Olympic Games when most of the public left the indoor bike racing event when there were no US bikers left but just racers from the UK, Australia and Italy. Only a handful of people watched the winners get their medals - truly a shame. 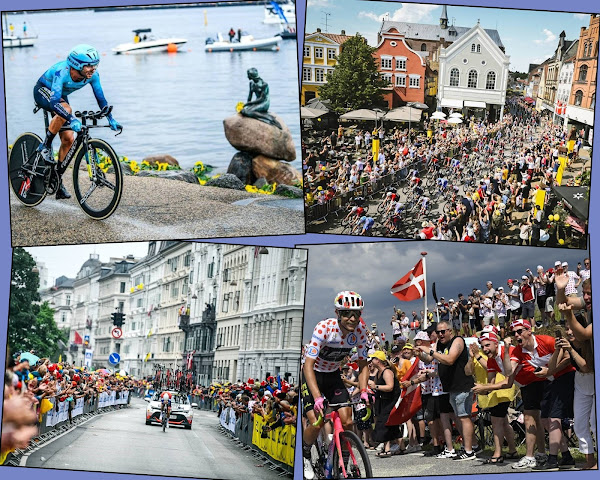 If I could, I'd fly back home to France every July to watch the Tour. But since I can't, watching this most famous race live on TV is a highlight of my summers here. I love the high drama of the race so physically challenging as well as the passion of the riders. Watching the hundreds of thousands of spectators from many countries is also fun. Of course, the scenery along the route or from the helicopters and drones over all the cities, towns, villages and hamlets is a joy; many castles are shown. I visited two of the castles below - the castle of Chillon in Switzerland (in center of collage) when I went twice to Lausanne and the castle of the Malmaison (bottom left) which is only 15 kms from Paris (about 9 miles) and visited it several times with my mother. 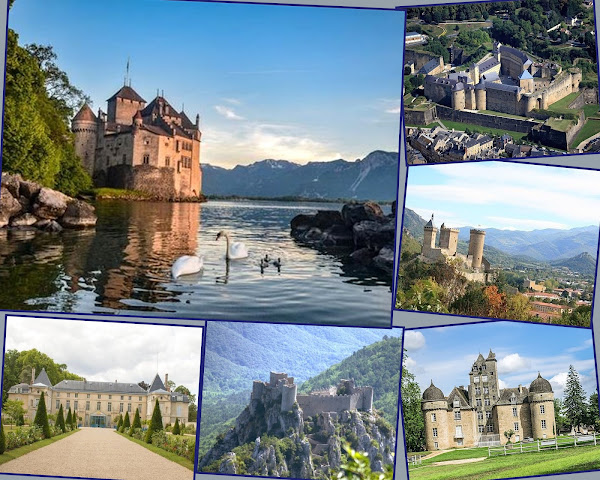 Since 1905 the Malmaison Castle has been a French National Napoleonic museum. Bonaparte had bought it for his wife, Josephine de Beauharnais (1763-1814) in April 1799. Napoleon lived in it several years and Josephine died there in 1814. The interior of the castle is one of the few places in France to exhibit a homogeneous set of furniture from the Napoleonic Consulate and First Empire. My mother and I loved to visit the rose garden there. One of their old antique Bourbon roses is called "Souvenir de la Malmaison." Originally it had been called "Queen of Beauty and Fragrance" but when one the Grand Dukes of Russia obtained a specimen from the Malmaison gardens for the Imperial Garden in St. Petersburg it was renamed "Souvenir de la Malmaison" as a remembrance for him. It produces light pink color blooms with a delightful fragrance; it is a climbing rose. I grew one in my garden in Georgia, shown below. 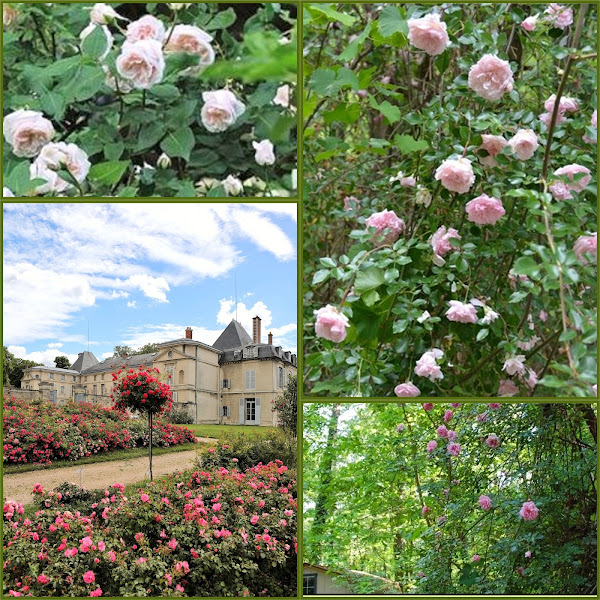 I even drew one of my Souvenir de la Malmaison roses. 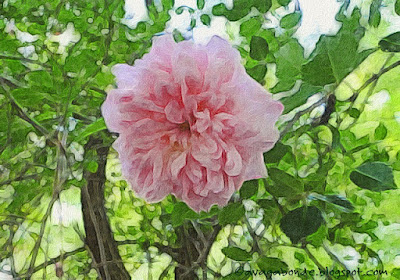 The Tour racers drove by numerous lovely and historic towns. To mention and show even some of them would take pages and pages. Stage 13 ended on July 15 at Saint-Etienne. It is the only French city designated Creative City of Design by UNESCO. In 2020, Saint-Etienne also received its second UNESCO label as an "Inclusive City of Design." Saint-Etienne with all its museums and buildings is a permanent design experience, in architecture as well as in every day life. In 1915 the mayor of the city ordered a replica of the Statue of Liberty. Stage 19 ended in the town of Cahors. This city is famed for its wine and gastronomy and holds the label "French Town of Art and History." The famous medieval Valentre Bridge here is part of the pilgrimage path to Santiago de Campostela. The 14th century bridge took 70 years to complete, from 1308 to 1378 (in center of collage below.) Two new cities on the Tour were Lacapelle-Marival with its blue lake (bottom left) and Rocamadour (top left below.) From the Middle Ages on Rocamadour has been visited by pilgrims as it is also on the route of El Camino de Santiago. The population of 600 rises to 1.5 million tourists in summer. 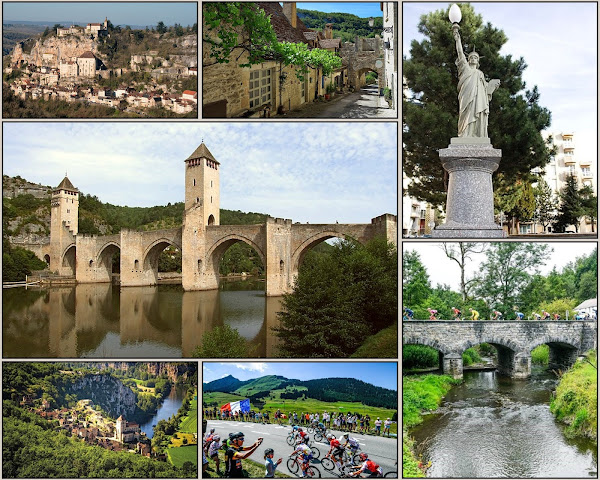 The 21 stage ended in Paris as usual. The winner of the Tour this year was the Danish rider Jonas Vingegaard. He is the first Danish rider to win this race since 1996. At the start of the race in Copenhagen, 35,000 paying fans had packed into the Tivoli Gardens to greet the riders. They must have been deliriously happy to have one of their own win this grueling race. The 25-years old Vingegaard showed an impressive display of strength. He is below with his little daughter Frida. 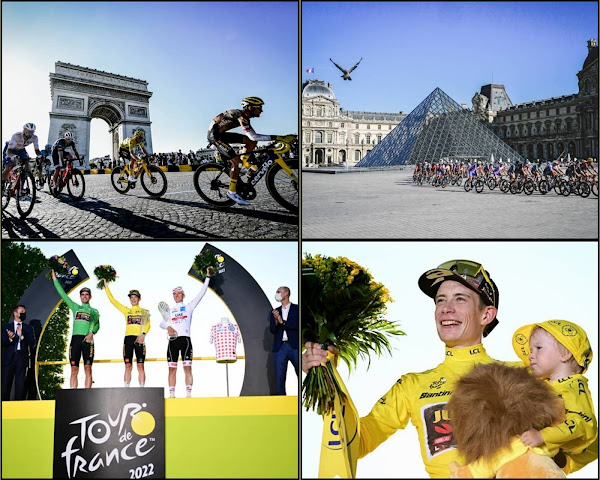 Another thrilling Tour de France has ended. Now we have to wait for the 2023 rendez-vous in Bilbao, the Basque country of Spain, for the Grand Depart of the Tour de France 2023. 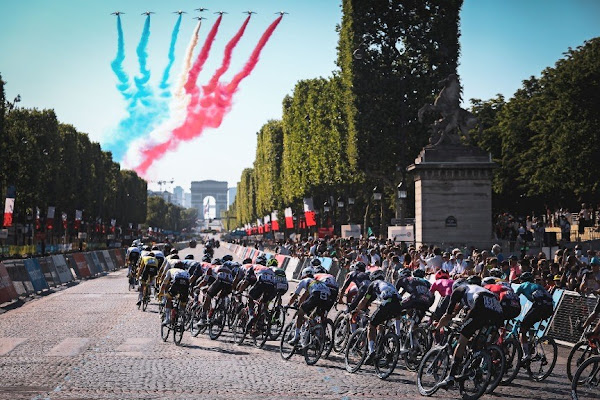