Summer of 2017 and the Tour de France 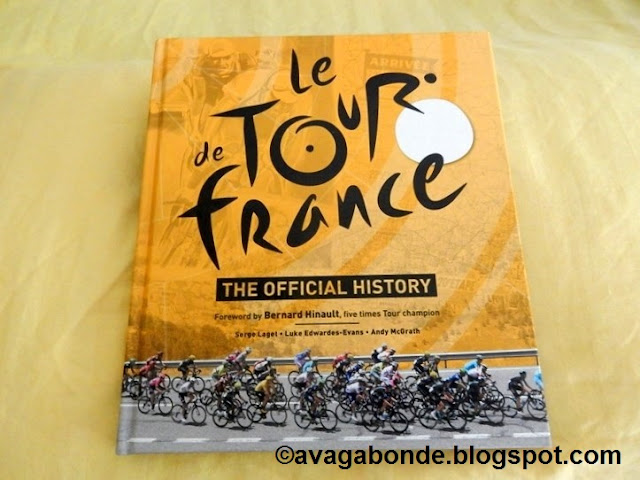 My last post was written in May, then June went by and July is about over.  The clearing out of the Georgia house for the move to Tennessee has stalled as I had to get ready for my first knee operation.  I had a left knee replacement surgery in the middle of July.  Now is the time to take it easy and go through therapy - no driving.  I cannot stay seated at the computer for long as it starts hurting, so this post is taking several days.  But I know this shall pass (until the right knee operation!)  June 17, 2017 was our 50th wedding anniversary.  My husband did not know about it because of his progressing Alzheimer's disease, but I took him to a restaurant anyway.  We went to a newly opened Greek restaurant nearyby in Smyrna, GA.  There was music providing a fun ambiance. 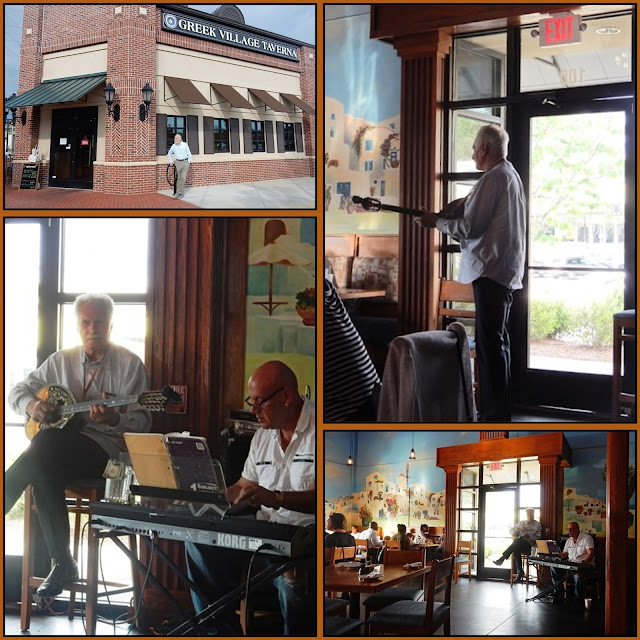 The menu was large with colorful pictures of the dishes and of places in Greece.  Click on collage twice to enlarge and see better. 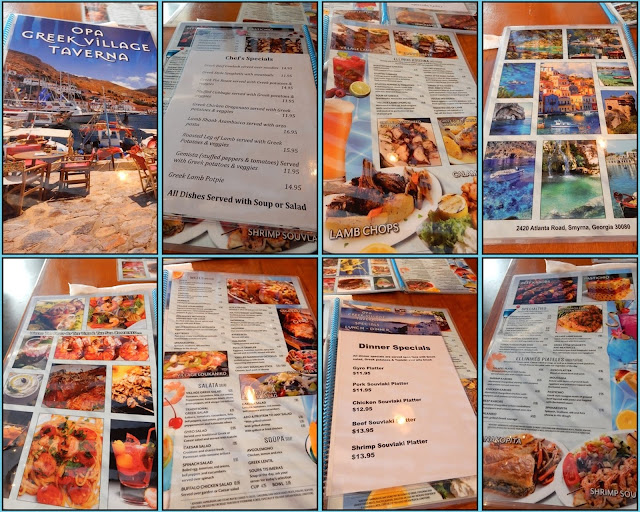 We ordered from the Chef's Special menu.  Jim had the Stuffed Cabbage, that was delicious, and I had the leg of lamb, not so delicious but a bit dry with too much meat.  The salad and bread were good.  The baklava bearing the number 50 was a nice touch. 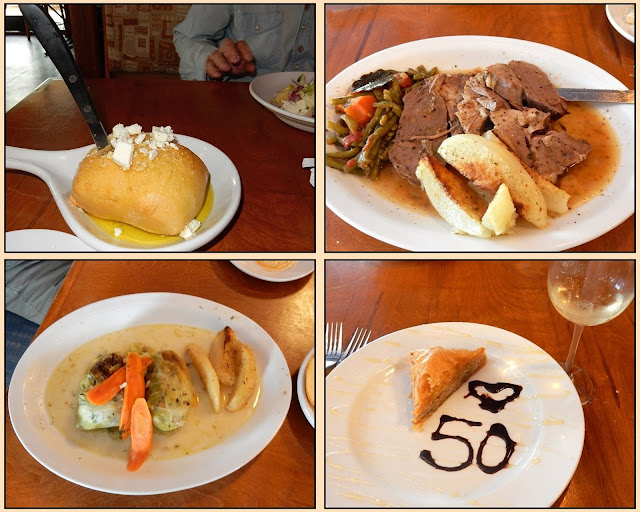 Dancing lessons were given to anyone interested.  My photos are dark as I did not use a flash. 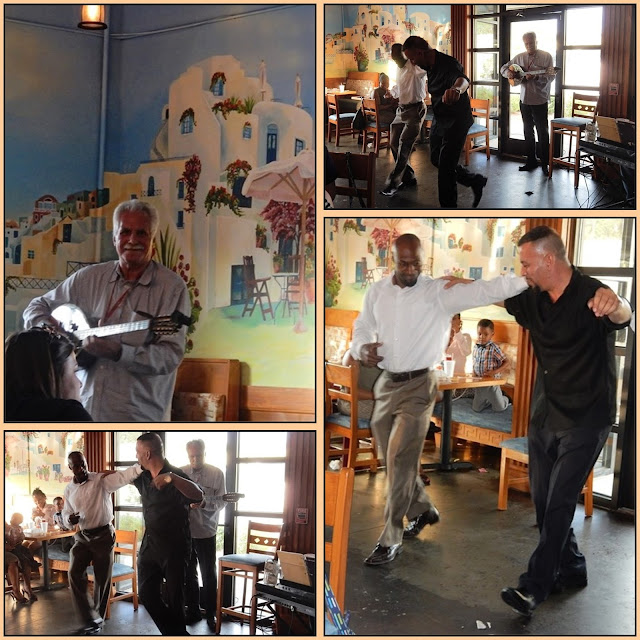 I have been looking at my pictures of the last two months to remember what we did to share here.  My husband kept busy watering weeds in the back yard, even right after the rain.  Once I did find a turtle he had placed, for some reason, inside an empty planter.  I looked at it for a while and she did not move.  I thought the poor turtle was dead but placed it on top of a plate of water, and soon enough her little eyes came out and looked at me.  It felt rewarding that I had found her in time.  (Turtle in French is "tortue" and is a feminine word.) 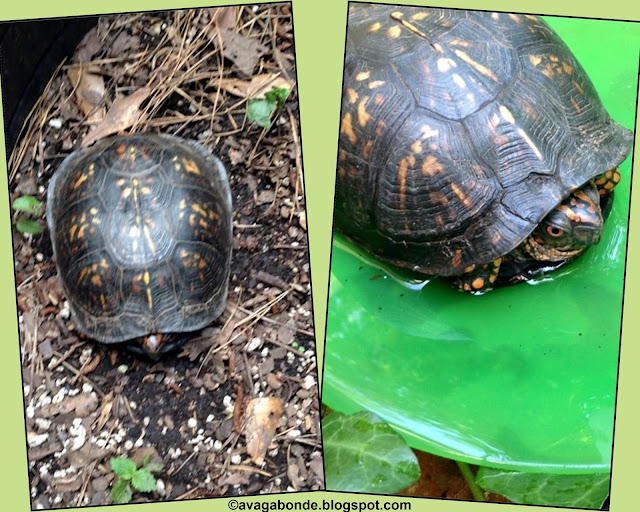 While clearing up I found a box with old bottle of wines.  One was from 1978.  I thought it would taste like vinegar, but no, it was still good.  I emailed the vineyard in California, still in business, and sent them a photo.  The manager emailed me back his thanks.  Under my daughter's bed I found an old bear.  Then, way back under her bed I found a big black box.  She messaged me that I could open it, that it contained a project she had meant to do for us as a 20th wedding anniversary present.  Inside were many photographs and movie films that I had thought were lost.  They had sat in this box, undisturbed, since 1987!  Just think, the first time I was seeing them in 30 years!  I did not have time to look at all of them but did find a picture of our daughter Celine with the old bear I had just found under her bed.  I also remembered the photo of our other daughter Jessica at her 2 year old birthday party.  It's going to be fun to have the old movie films made into DVDs and look at them - most are from San Francisco in the 1960s. 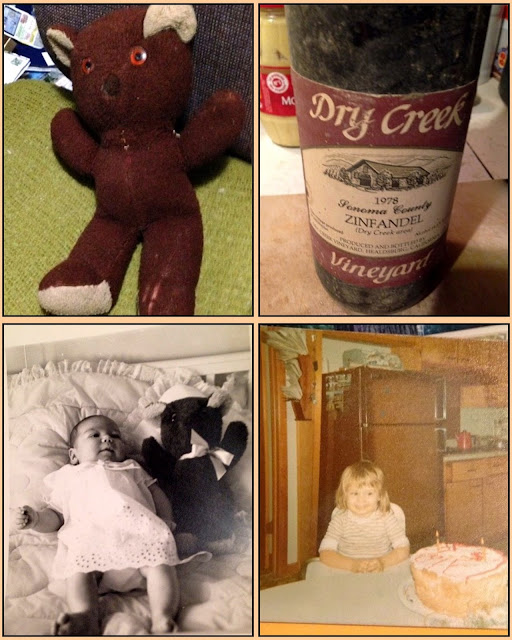 At the end of June we went to my primary care physician to get a quick release for my knee operation.  I remember taking a photo to show how nice and empty the waiting room was.  We were not in the office very long.  But just as we were on our way out the door, there was a tornado warning and patients were asked to assemble in an indoor hall - quite a few of them.  We were packed in there for close to 3 hours with doctors, nurses, patients, some with upset and unruly children and autistic teenagers who were going into hysterics - quite an afternoon! (I moved my cell phone camera on purpose to blur the faces of the people in the hall.) 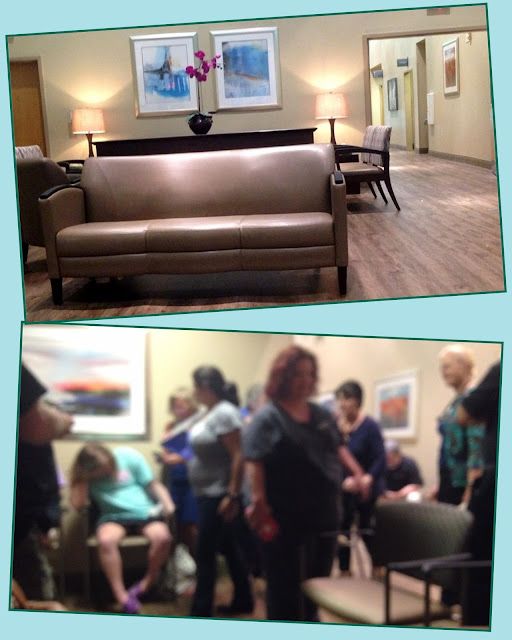 The evening before my knee operation we went to a fine Mexican restaurant in Brentwood, Tennessee, Uncle Julio.  It was not too warm and we sat outside. They advertize authentic, made from scratch Mexican specialties.  It was difficult to decide what to eat as the menu listed so many interesting choices.  While deciding we ate a delicious roasted tomato salsa and queso dip with homemade tortillas. 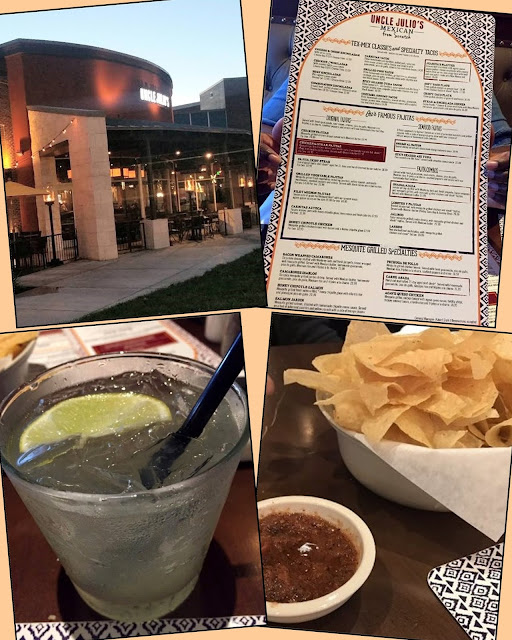 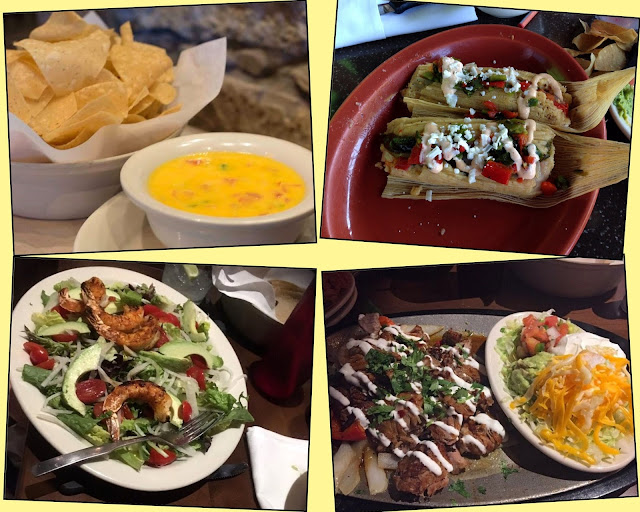 Our four grandchildren were fascinated by the waiter making side table guacomole, which he explained to them as he went along. 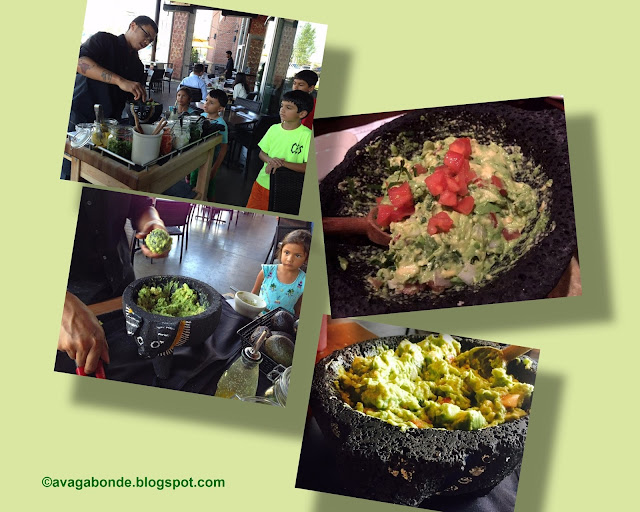 I saw glimpses of the 14th of July (what Anglophones call Bastille's Day) celebrations in Paris on my Ipad and room TV while in the hospital.  To celebrate the 100th anniversary of US troops arriving in France to fight in World War 1, this year the 14 of July celebrations were placed under the Franco-American friendship.  US President Donald Trump had been invited by French President Emmanuel Macron as a guest of honor.  Top picture in the collage below is a Library of Congress photo of US General "Black Jack" John J. Pershing arriving in Boulogne, France on 13 June 1917, then a photo of him next to French General Peltier.  In center are the two presidents and wives having dinner on July 13, 2017, in the Alain Ducasse's upscale restaurant "Jules Verne" on the second floor of the Eiffel Tower. 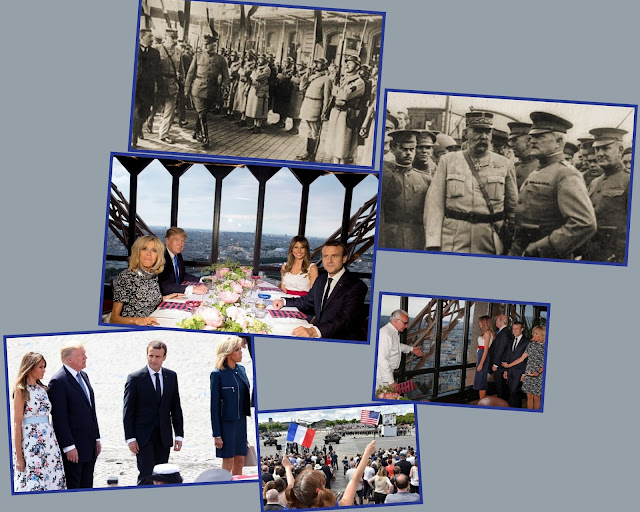 The parade down the Avenue des Champs-Elysees started with 145 US troops marching ahead.  More than 3700 French military personnel followed them.  At the end of the parade the French inter-military orchestra played for 86 seconds, "Nissa la Bella" the city of Nice national hymn, in remembrance of the 86 victims of the terrorist attack there on 14 July 2016.  They ended by positioning the band to form the word "Nice."  President Macron later that day flew to Nice to pay tribute to the victims. 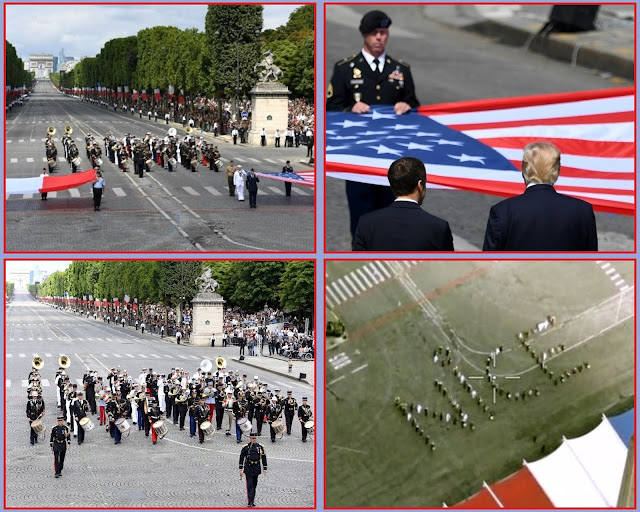 As is the tradition, the 14 of July festivities ended with fireworks by the Eiffel Tower in Paris, as well as in most other French cities and towns. 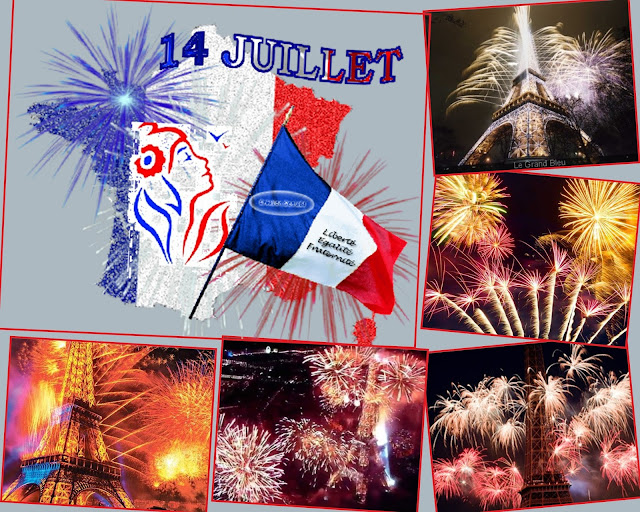 I was in hospital for four days - July 12 through 15th.  My doctor sent me a pretty red rose, and the CEO of the hospital a beautiful bouquet of unusual flowers.  I also watched the Tour de France on my little TV in my hospital room. 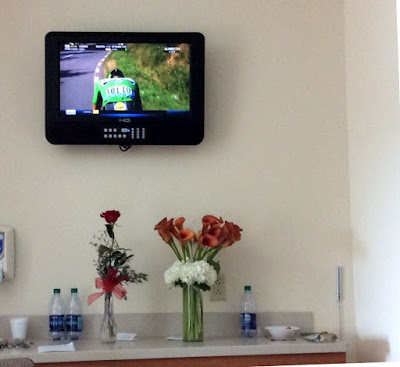 This year the 104th Tour de France started in Dusseldorf, Germany on July 1st, 2017.  It ended on Sunday July 23, 2017 on the Paris Champs-Elysees.  It was made up of 21 stages and covered a total distance of 3,540 kilometres/2,143.73 miles.  It included 9 flat stages, 5 hilly stages, 5 mountain stages, 2 individual time-trial stages and 2 rest days.  It also included a total of 23 mountain climbs or hills.  The Tour visited three neighboring countries: Germany, Belgium and Luxemburg; 635 towns were visited among 34 counties of France.  Twenty two international teams made of 198 cyclists started the Tour.  More statistics:  2000 media personnel (TV, radio, newspaper and magazine reporters and photographers,) 23,000 police and security personnel along the route, 170 publicity caravans, 100,000 recyclable garbage bags, 2,800 special signposts installed on dangerous points along the Tour roads, 5,540,000 fans following the Tour on social media, 13 million plus fans watching by the side of the route, 1 billion TV viewers in 190 countries. 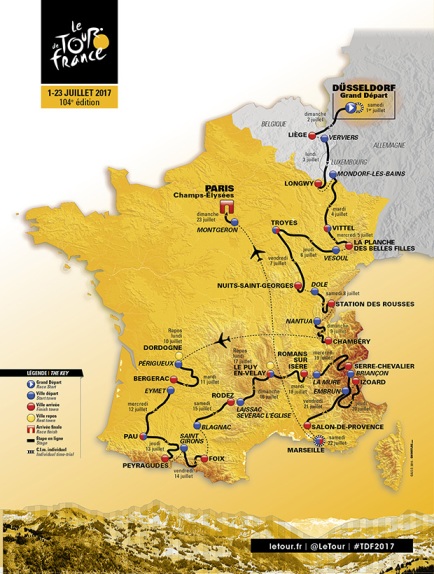 Starting with "What is the Tour de France?" on July 22, 2009, every year I write a post on the Tour - you can find the posts by looking under Tour de France on the side of my blog.  I did not mention before the caravans following the Tour, or more accurately ahead of the Tour - 170 publicity caravans (custom-built especially for the Tour) representing 43 organizations.  Their long procession arrives one hour ahead of the race.  Their personnel, usually students working on this special summer job, hand out 14 million gifts to the roadside spectators.  Children and adults alike love getting the caps, sweets, key rings, souvenirs thrown at them.  It gives the Tour this special noisy, crazy fun with blaring music and excitement. 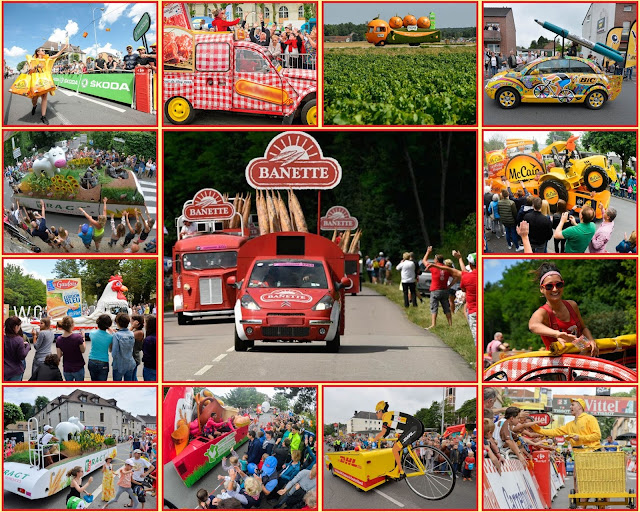 From the millions of fans along the roadside, of all ages and types (animal included,) some wear outlandish outfits or makeup. 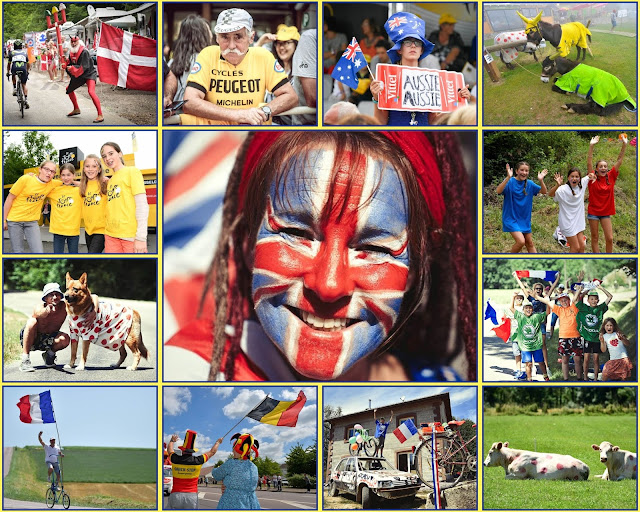 The helicopters following the Tour offer us some great overviews and glimpses of the surrounding landscape.  (Do not forget to click on the pictures in the collage twice to see them better.) 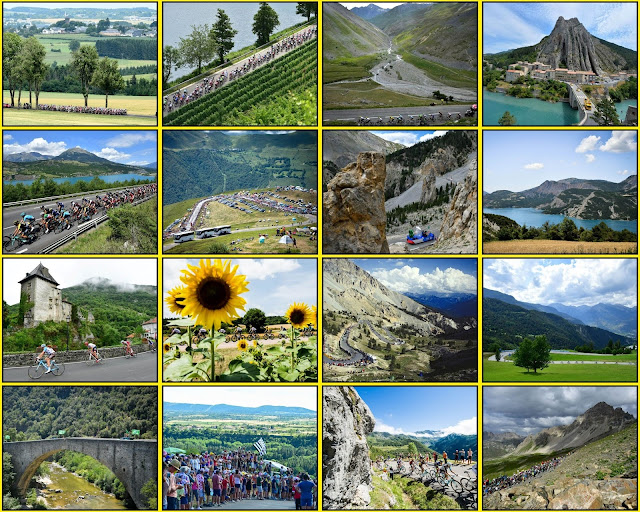 I like watching the cyclists who have been running in several previous races, such as Alberto Contador of Spain, Richie Porte and Mark Renshaw of Australia, Thomas Voeckler, Sylvain Chavanel, Thibaut Pinot and Alain Bardet of France, Tony Martin, Andre Greipel and Marcel Kittel of Germany and Nairo Quintana of Colombia.  Unfortunately, this year my two favorite sprinters, Mark Cavendish of the UK and Peter Sagan of Slovakia did not finish the Tour.  During the sprint at the end of stage four, Mark Cavendish crashed after hitting Peter Sagans' elbow.  Mark suffered a fractured shoulder blade and withdrew.  The Tour authority disqualified Peter Sagan saying that his dangerous elbow move provoked the accident.  (I think this was controversial and I did not agree.)  But this gave an opportunity for other sprinters to win like the rising star from Canberra, Australia, Michael Matthews.  Matthews won the green jersey for this year's Tour de France. 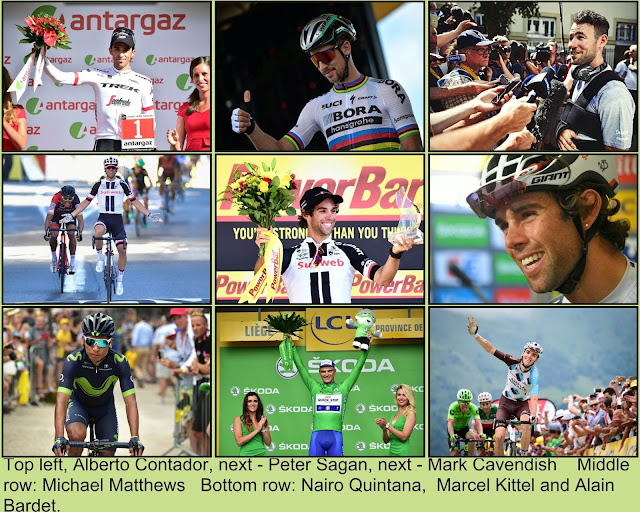 Another rising star is Warren Barguil from Brittany, France.  He made the French fans happy by winning Stage 13 on July 14, Bastille Day, against Nairo Quintana and Alberto Contador.  He is the first frenchman to win on the 14th of July since 2005.  President Macron personnaly congratulated him.  Barguil ended winning the polka dot king of the mountain jersey for the 2017 Tour.  Christopher Froome won the Tour de France, his fourth win in a row.  Below top left is Warren Barguil and then President Macron and Barguil.  The rest of the photos show the final Stage going through Paris and the winners. 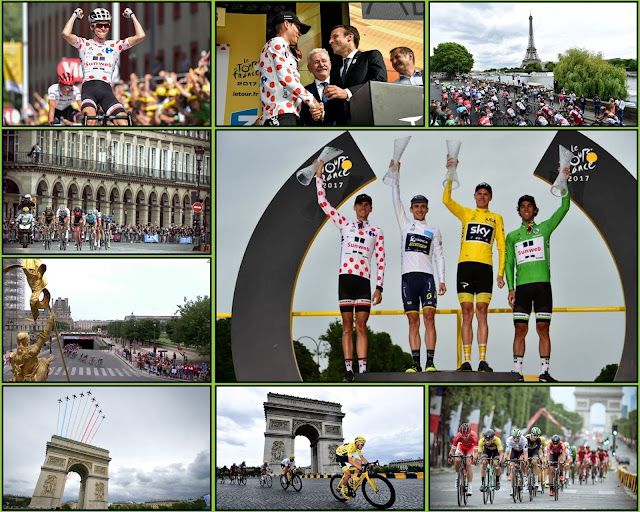 Below are more pictures from the 2017 Tour de France. 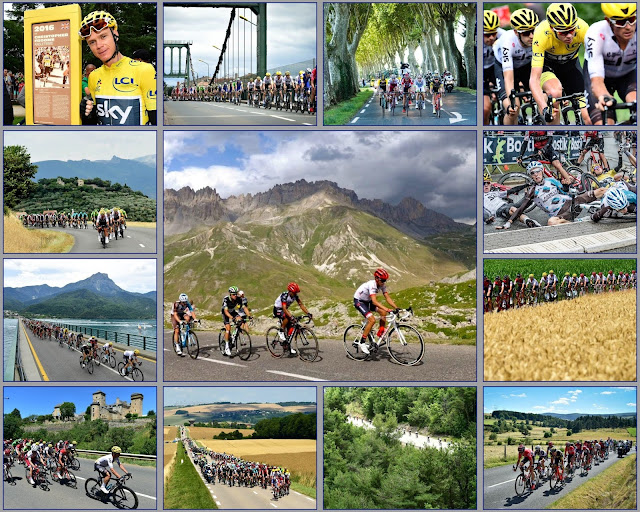 Now I have to wait another year to watch the Tour again.  I was happy to just find out that my son-in-law has the book on the Official History of the Tour de France (pictured in the heading.)  It will be fun to have a look at it and learn more.  I end this post by saying "Vive le Tour!" 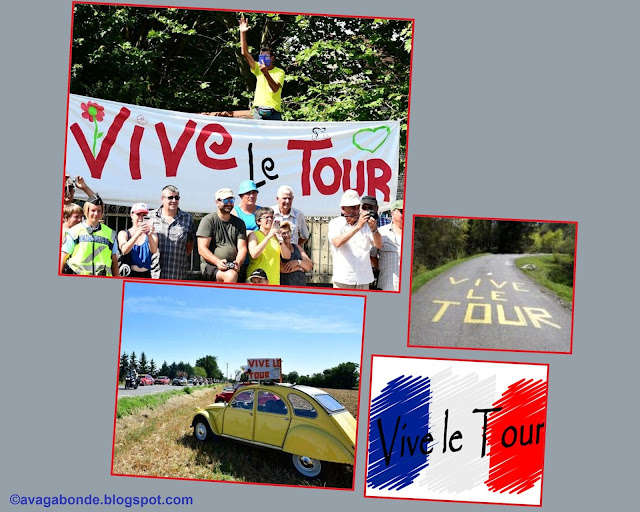