A busy autumn week in Georgia 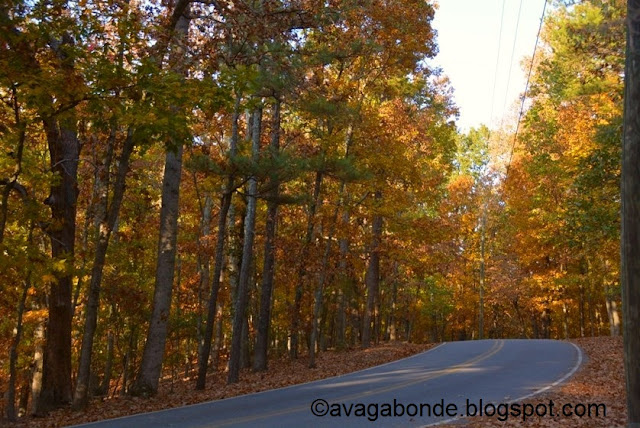 First, I'd like to thank all my blogging friends for writing many words of comfort on my last post about the passing of my husband.  I am also grateful for the individual emails of support that were sent to me.  It was a sad time returning to Georgia where I had planned to take back my husband's winter clothes to Tennessee, but now they were no longer needed.  I found a homeless shelter not far away and was able to bring some of his warm coats there.  After I told the roofer that my husband had passed away he said that I could delay the work until it was more convenient.  But I had decided to go to Georgia that week so I could vote early.  And I did drive there on October 28, 2018, as I mentioned in my last post. 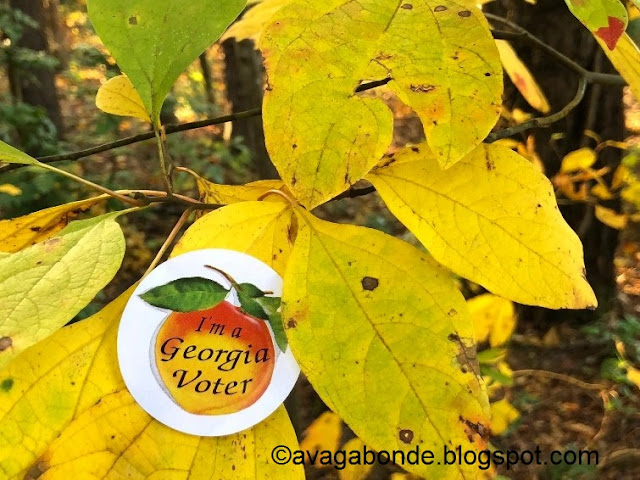 This was an important mid-term vote in Georgia because it showed that the state is not totally conservative anymore.  The youth turnout increased 500 percent and six time more Hispanic/Latino voters cast their ballots as well as twice as many African-Americans as before.  Some people in GA had to wait 6 hours in line to vote.  The turnout in my county, Cobb, was 63.7% more than last time even though 600 voting machines had been taken out of the pool by Secretary of State Brian Kemp, who is also running as a Republican for the governor seat.  I was very surprised to see that all the suburban counties around Atlanta switched to blue, anywhere from 55% to 83.4%.  Even if she does not win the race (at this writing it is still undecided) Stacey Abrams, the Democratic Party nominee running for the Georgia Gubernatorial seat, has shown that Georgia is becoming more liberal.  Twenty-nine counties in Georgia voted blue (Democratic) against for example states in the Midwest not considered as conservative as the deep South, such as Indiana with only 3 blue counties, and 3 blue counties as well in Missouri (against 13 blue in Alabama.)  Pictures below showing voting in Cobb County (courtesy AJC.) 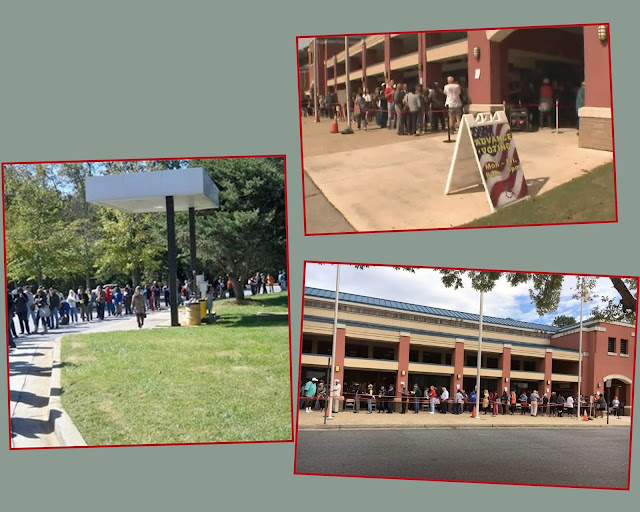 The new roof installation was done promptly several days after I arrived in Georgia.  Next month it will be the gutters.  The day before I drove to Georgia, Saturday October 27th, eleven congregants in a Pittsburgh synagogue were massacred by a man shouting anti-Semitic words.  This really upset me that in this country, in 2018, there could be such an attack on innocent worshipers.  I thought that people of every race or religion were endowed with the same inalienable rights here, no?  I read that in 2017 anti-Semitic incidents increased in the US by 60%, the largest increase in a single-year.  These 1,986 incidents included physical assaults, vandalism and attacks on Jewish institutions.  Below is a photo of the stained glass windows in the main sanctuary of the Pittsburgh synagogue Tree of Life or L'Simcha Congregation, courtesy Tree of Life synagogue. 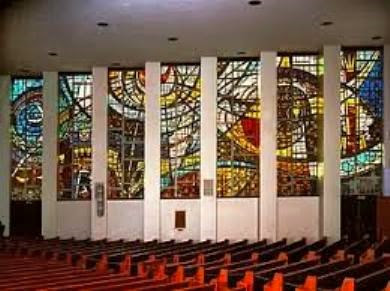 Many argue that President Trump is not helping with his brand of politics using racial rhetoric, attacks against immigrants and his ways of stirring the pot of nationalism and even proclaiming that he is a nationalist.  So when I read that the American Jewish Committee was encouraging people of all faith to #ShowUpForShabbat the first Friday and Saturday after the Pittsburgh tragedy I decided to attend to reject hate and show my support against anti-Semitism.  Many Jewish organizations in the country were taking part in this appeal (and in other countries too.)  I found a synagogue in West Cobb County, not far from my home, and I showed up for Shabbat that Friday evening.  I had never attended a service in a synagogue and was pleased that the rabbi gave many explanations about the programming of the Shabbat service.  It is a small synagogue but it was full with new attendees that Friday.  All of us, Jews and gentiles were happy to say "Shabbat Shalom."  (photos courtesy Temple Emanu-El, New York.) 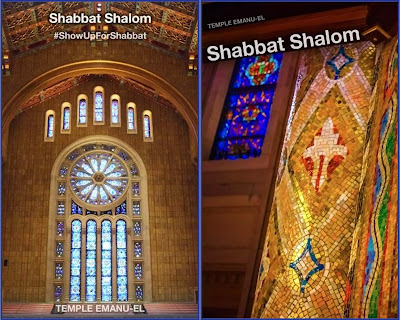 The rest of my few days in Georgia went very fast as I gathered as much as I could again to give to charity or toss away.  But I am a long way from being done.  I did find another couple of bags full of vintage postcards.  Sometime it was depressing to look at clothes that my husband had worn on a special occasion.  I would take a few minutes rest and have a nice cup of tea - always comforting.  Luckily I had kept a few china mugs and cups in Georgia and some special tea.  Below is a picture of the Harney & Sons RMS Titanic Tea.  It was created with a blend of Chinese Keemum and Formosa Oolong as a commemorative tea to honor the 100th Anniversary of those who perished in the sinking of the Titanic (a portion of the sale of this tea goes to The Ocean Conservancy.) 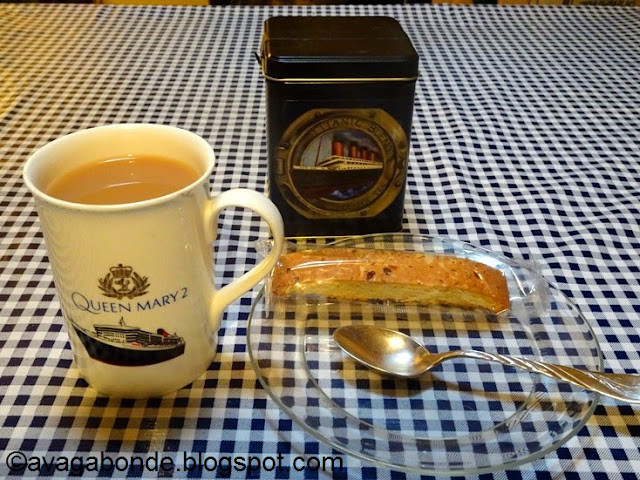 On Sunday 11 November 2018 there was another commemoration, the Centennial of the end of World War 1.  This most terrible war ended at "the eleventh hour on the 11th day of the 11th month."  I had written a post on the history of WW1 on December 2, 2011, after having been in Paris when, for the first time, a Chancellor of Germany attended Armistice Day in Paris.  You can read it here
"Historical Armistice Day - 11 November in Paris."  In this post I explained the history and gave statistics: "In four years the number of military and civilian casualties came to more than 40 millions: 20 millions dead and 21 millions injured.  This number includes 9.7 million military deaths and 10 million civilian deaths.  As a point of reference, in four years the American Civil Was suffered 600,000+ killed. (Click on collage to enlarge.) 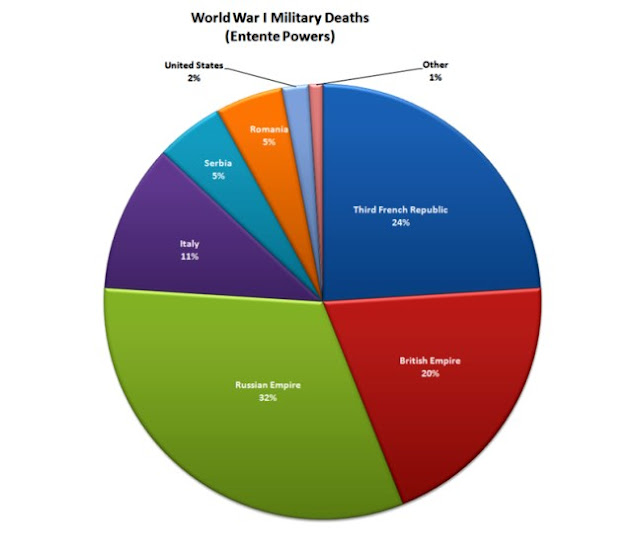 As another point of reference: since June 2003 there has been 4486 troops killed in the Iraq war - during World War 1 over 7500 troops were killed each week.  The scale of destruction of WW1 was enormous - whole generations were wiped out."  We need to salute those who served during this atrocious war and honor the millions killed and wounded in the conflict.  The Armistice was signed between the Allies and Germany in the Forest of Compiegne in France in a railway carriage at 5:00 am on November 11.  Six hours later, at 11:00 the conflict ended. 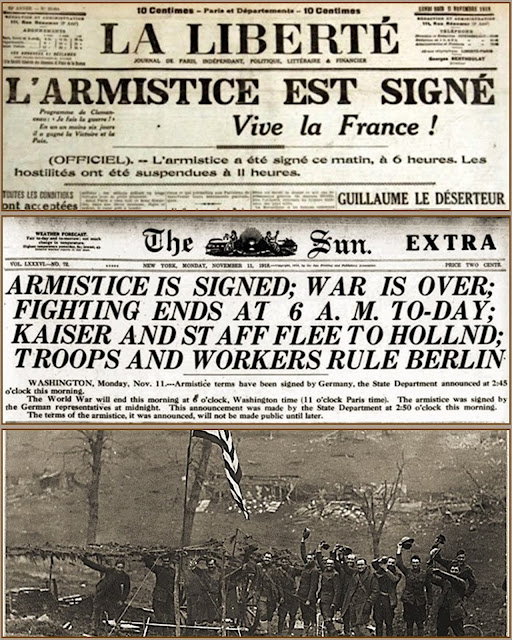 On July 14, 1919, there was a Victory Parade down the Champs Elysees in Paris honoring the Allied with General Pershing, Marshal Haig and troops from the United States, Belgium, The United Kingdom, from Italy, Greece, Poland, Portugal, Romania, Serbia, Siam, Czechoslovakia, Japan, China and more - 31 countries had fought in the war. 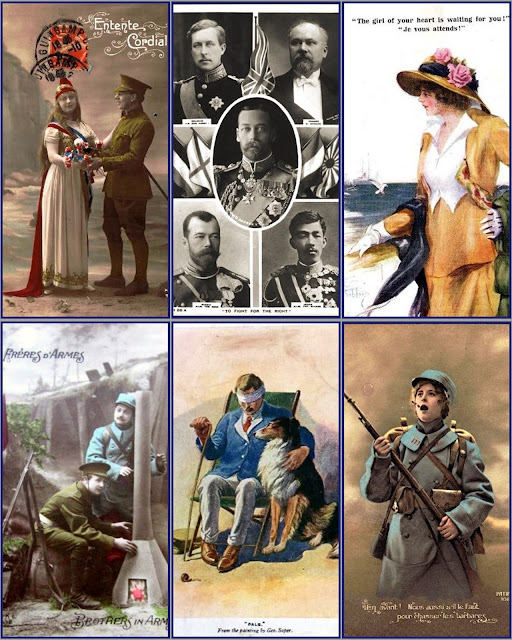 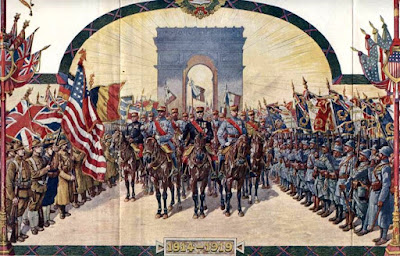 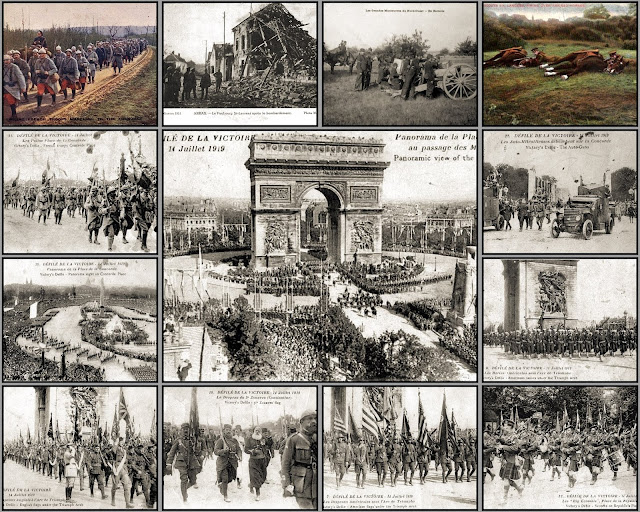 In Paris on November 11, 2018, over 100 world leaders and dignitaries walked up the Champs Elysees in the rain toward the Arc de Triomphe to stand before the grave of the unknown soldier (President Trump did not walk with them on account of the rain but came separately.)  Notice that Canadian Prime Minister Justin Trudeau did not walk under an umbrella.  He had said during the commemoration of the raid on Dieppe where 907 Canadian soldiers were killed, 586 wounded and 2000 taken prisoner, that in Dieppe that day it wasn't rain, it was bullets.  Yo Yo Ma, the French-born Chinese-American cellist played the souful Saraband from Bach's Cello Suite No. 5, to the world leaders assembled there.  At 11:00 a minute of silence was observed, and then all the bells rang in churches all over France.  In his speech afterwards, President Emmanuel Macron saluted the memory of the soldiers sacrificed in the fighting.  He also said : "Patriotism is the exact opposite of nationalism" "Let's add up our hopes instead of opposing our fears!" He urged the assembled leaders to "fight for peace" by refusing "withdrawal, violence and domination," pleading once again for a multilateral approach to global governance at a time when more and more countries are inclined to turn their backs on it.  He ended his speech with "Long Live friendship between peoples, long live France."  (Photos courtesy Paris-Match.) 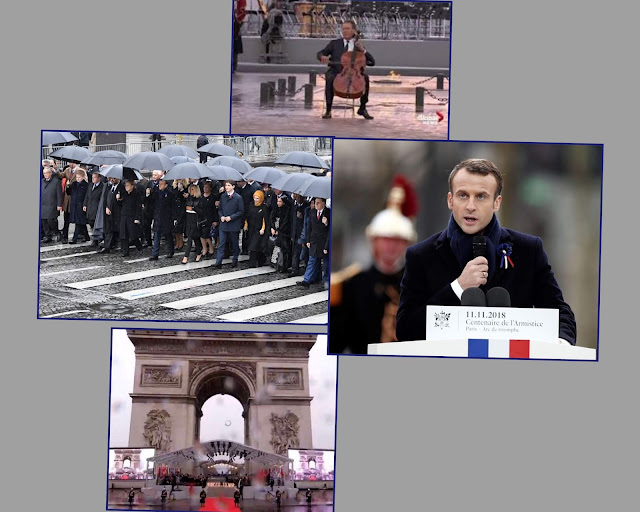 Then the 130 honored guests were invited to a luncheon at the Elysee Palace where Chef Guillaume Gomez (shown below) included the famous Bresse chickens and the potatoes from the Somme in the menu.  At the main table were seated Emmanuel Macron, Donald Trump, Angela Merkel, Vladimir Putin, Mohammed VI King of Morocco, King Felipe VI of Spain, Peter Cosgrove General Governor of Australia, Albert II of Monaco, Canadian Prime Minister Justin Trudeau, Denis Sassou Nguesso President of Congo, Idriss Deby Itno President of the Republic of Chad, Prime Minister Benyamin Netanyahou of Israel and many others. 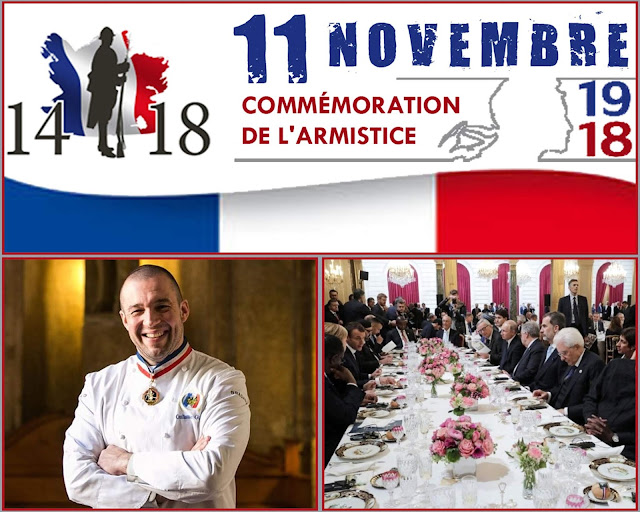 For this special luncheon the Elysee had set their priceless porcelain china named "Oiseaux" (birds) created in 1758 by the manufacture of Sevres.  This porcelain manufactory was founded in 1738 thanks to the support of French King Louis XV and his mistress Madame de Pompadour.  It replaced the Meissen porcelain as the grandest of ultimate luxury favored by European royalty, the 19th century aristocracy and great collectors. 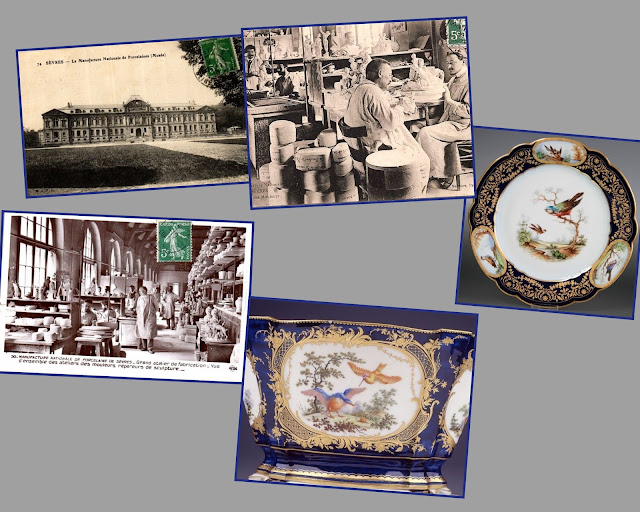 As part of the week-end ceremonies President Macron invited the world leaders to a "Paris Peace Forum" to discuss global governance.  Angela Merkel of Germany was present as well as Russia's Vladimir Putin and Turkey's Recep Tayyip Erdogan but Donald Trump did not attend.  He also did not participate, because of rainy weather, in the visit to the Aisne-Marne American cemetery in the village of Belleau were the US forces suffered 9,777 casualties including 1,800 killed.  France renamed the wood "Bois de la Brigade de Marine" (Woods of the Marine Brigade) in honor of the Marines' tenacity.  This is an historic battle for the US Marine Corps.  (US Veterans noticed that Donald Trump canceled this planned visit supposedly because it was raining, and were not pleased.  However, a French newspaper noted that someone had heard Mr. Trump saying he had no interest in visiting the cemetery and it would mess up his hairstyle.)  There are roughly 36,000 monuments in France honoring the fallen of WW1.  I showed many of them on my postcards in a 2014 post, look here .  This year the mayor of Paris, Anne Hidalgo, unveiled the new WW1 Paris monument to the 94,415 Parisians who died for France and the 8,000 missing in that war.  (Photos courtesy Paris-Match.) 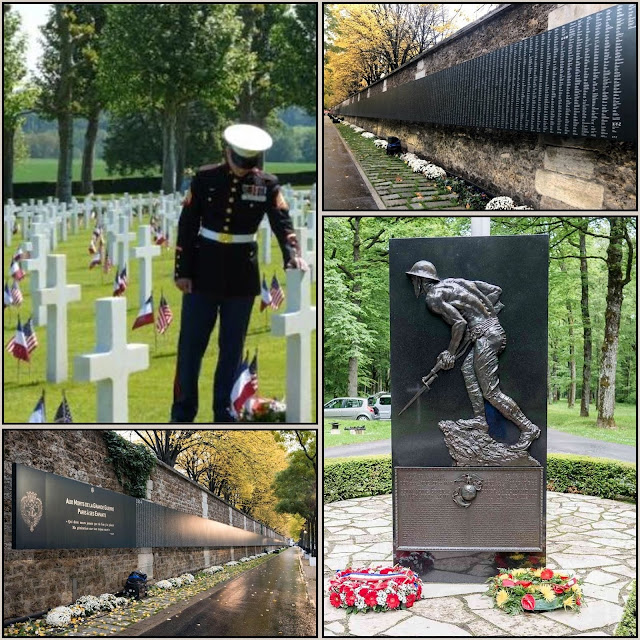 I am back in Nashville now and will not return to Georgia until December because family will gather for Thanksgiving at my daughter's in Tennessee.  I wish a happy and festive Thanksgiving to each of you.