Spring all around us - and blog anniversary 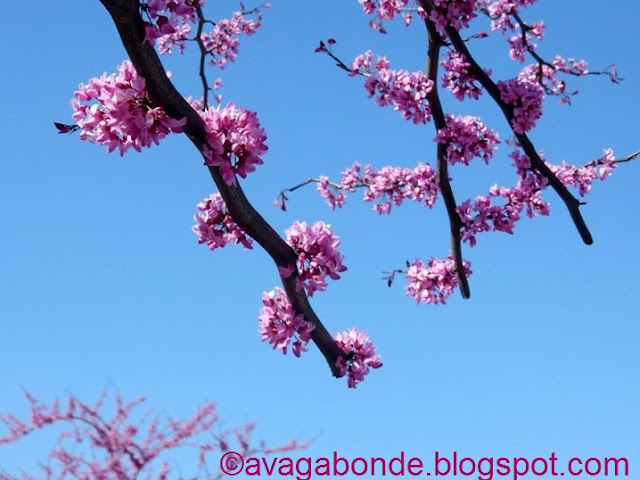 Spring has been in Georgia for several weeks already.  I carry a little camera in my purse and, along the way, take many pictures of pretty trees in bloom.  The pictures are from everyday places in town as we go on our errands.  In early March while we waited on our car having a part repaired we walked next to the garage and this is what we saw.  (Click on collages twice to enlarge.) 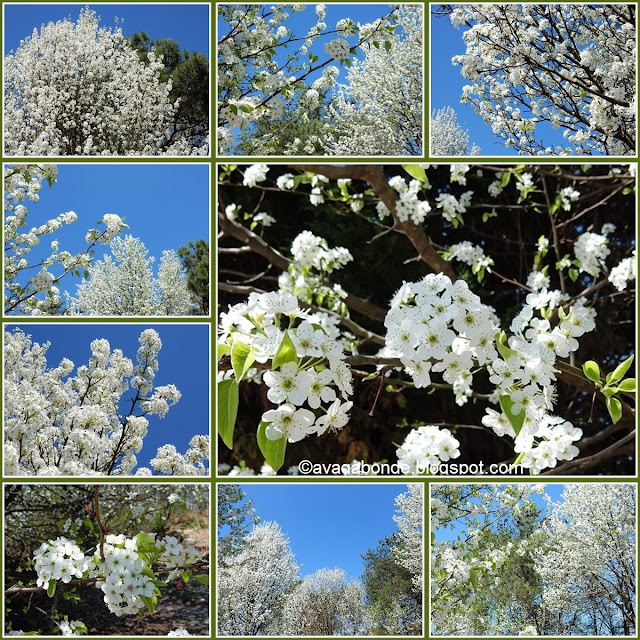 Around our home, houses nearby have many blooming bushes and colorful trees. 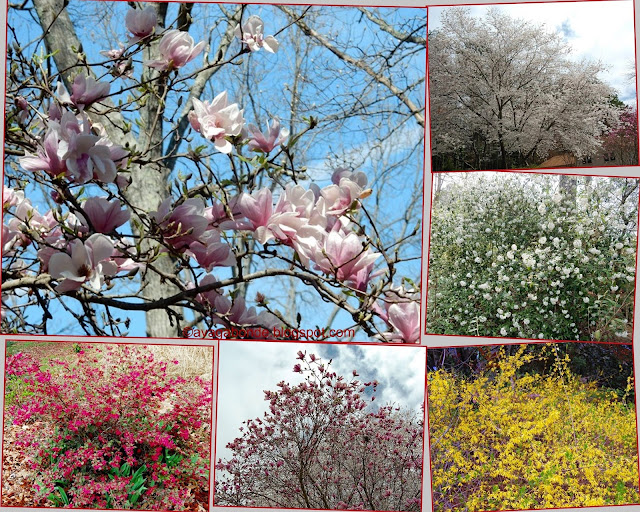 Trees in blooms are not choosy; they will bloom around modest homes as well as around mansions. 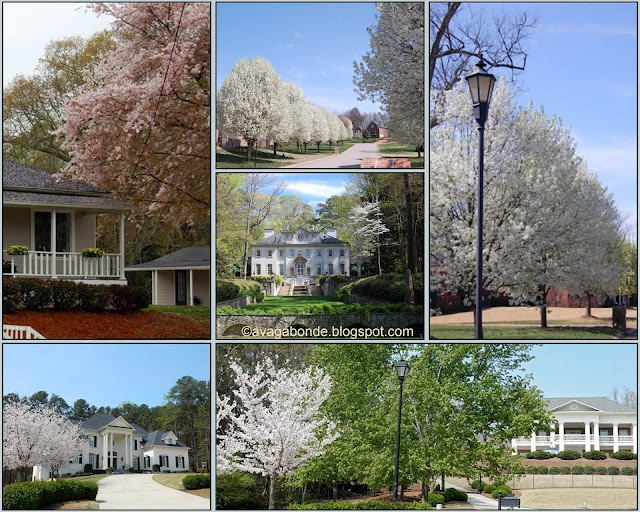 Sometimes I see beautiful trees while driving, but if cars are following me inches away and I can't stop.  If I can park, I'll stop for a few moments.  Below, my husband took a picture of me while I was in a driveway snapping blooms. 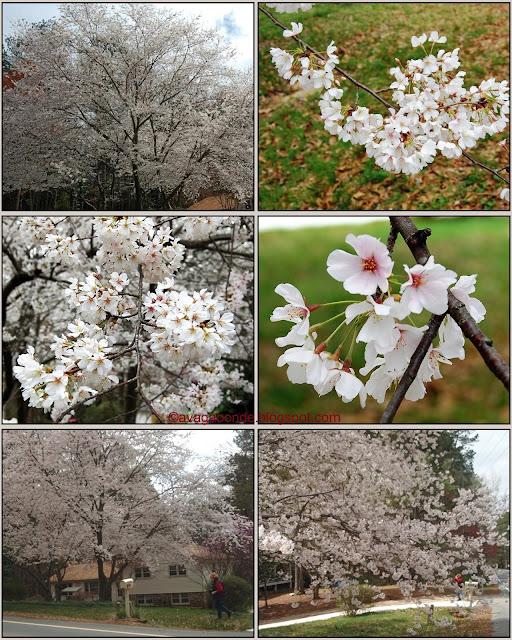 There should be a sign on my car bumper saying Will stop for trees in bloom! 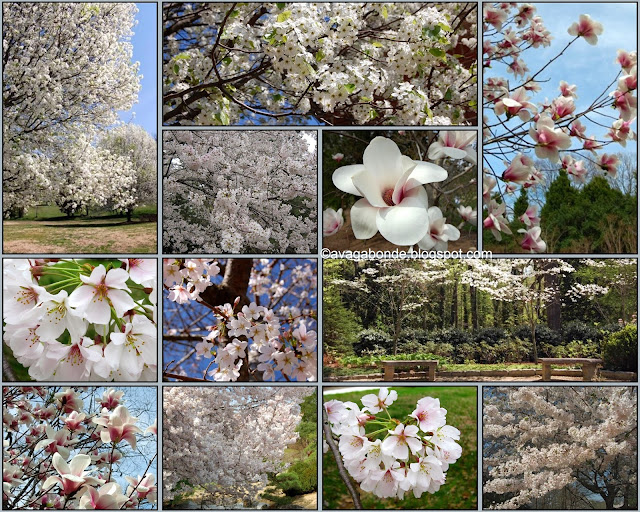 Since we don't live in downtown Atlanta where there are tall office buildings, our doctors' offices can be in small houses.  Last week I went to my dentist for my scheduled visit, and was in awe of the Japanese cherry trees blossoming around his small building.  I took 20 photos of the trees and blooms; below are some of them.  It looked like some cotton balls or even snowflakes had been stuck on the branches. 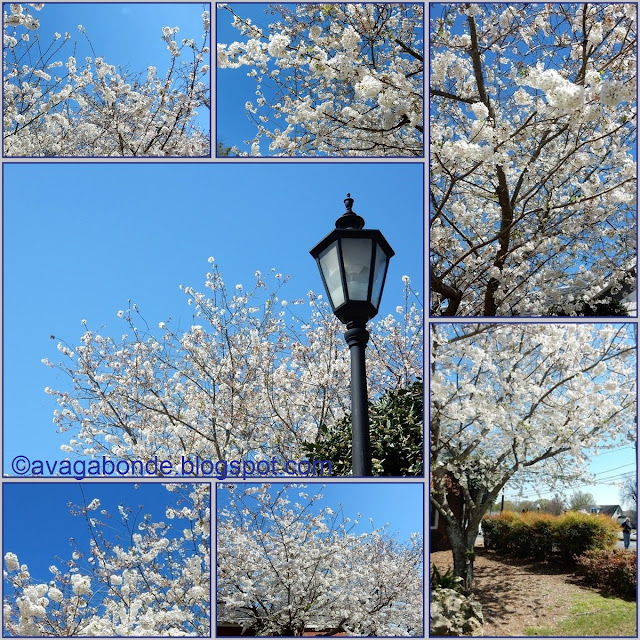 Pink blossoms were bursting out on trees in the parking lot of another doctor's office. 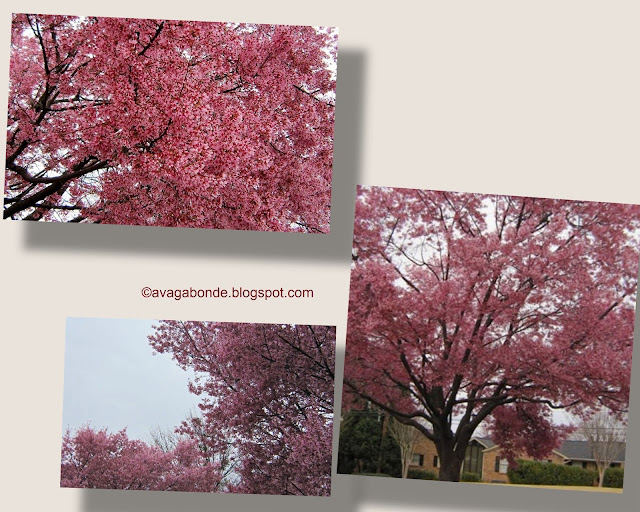 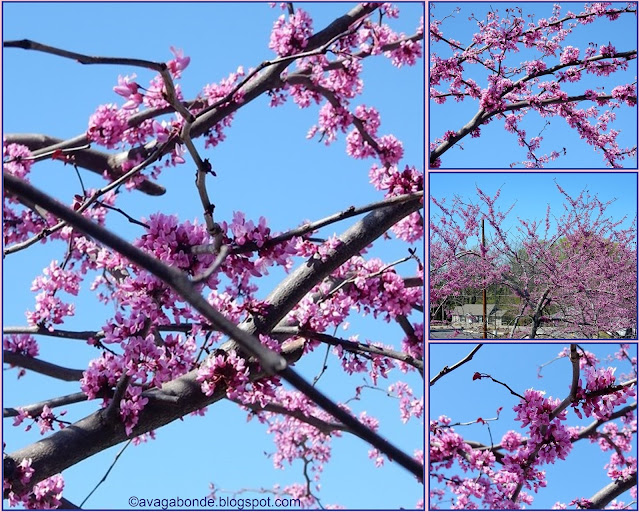 Blooms were even coming out from the tree trunk. 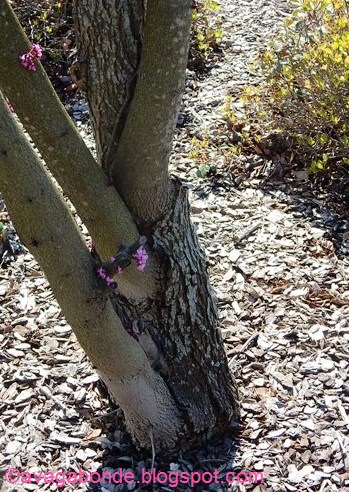 We drove to the Cobb County government offices to bring back a form last Friday.  They were closed because of Good Friday, but we enjoyed walking around their nicely manicured lawns and their blooming trees. 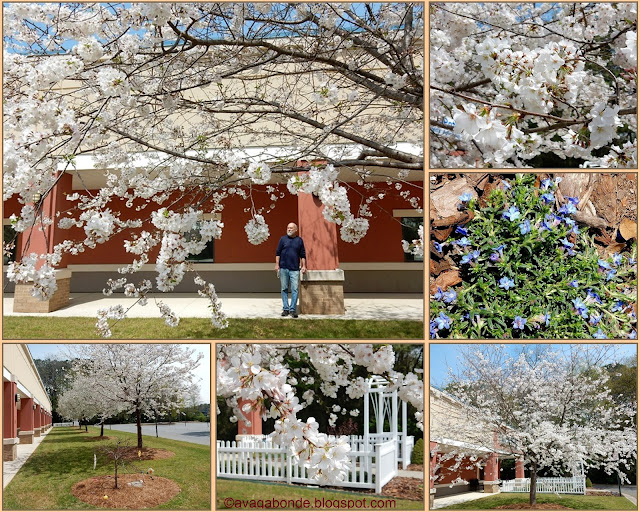 Then yesterday we had to drive to the Georgia Tag Office to get our 2016 vehicle tag.  The skies were overcast but driving back home, in the distance, it looked like some pine trees had a purplish tint.  We stopped and I took many photos, vertically and horizontally.  There was a multitude of wisteria vines growing wild on most of the pine trees on a ridge.  Even mundane errands bring joy when the surroundings are lovely. 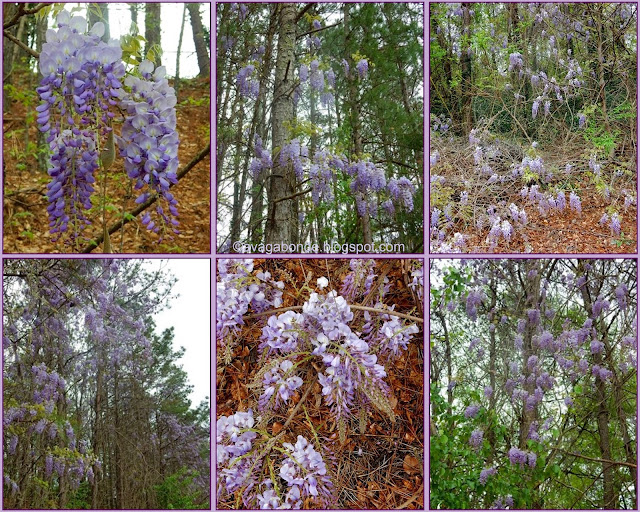 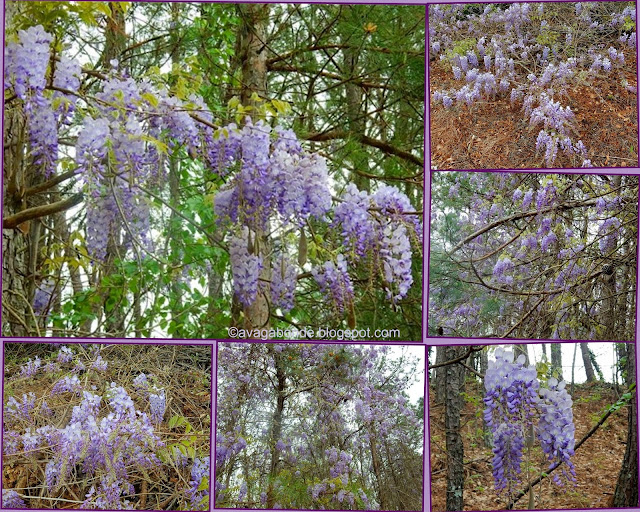 Last Saturday, March 26, was my birthday.  I had hoped to go on a small road trip in the Buckhead area of Atlanta to look at spring flowers blooming around beautiful mansions, but it rained.  In the evening we went to an Italian restaurant in Kennesaw called Provino's.  They offer a free dinner on the day of one's birthday.  I had the "Veal Francese" (French veal) which is veal scallopini egg dipped, sauteed golden in lemon butter & wine sauce.  A small side of pasta with fresh tomato sauce came with it as well as a salad and hot garlic rolls.  My husband had a seafood pasta dish - both were good but I forgot to take pictures.  For dessert they gave me a complimentary dish of spumoni ice cream.  I took its picture with my cell phone. 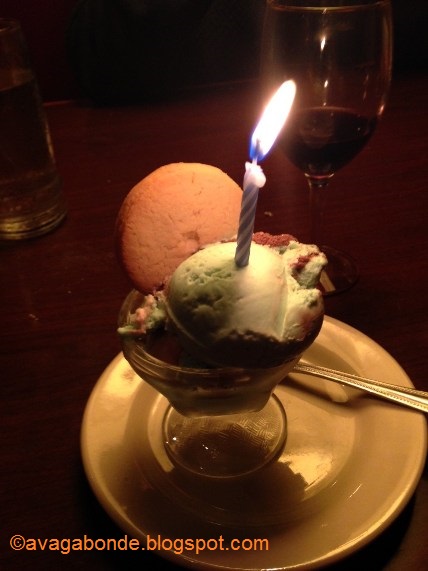 But since this was not a birthday cake, we did buy a belated birthday cake at my favorite French bakery "Douceur de France."  It was a chocolate cake, called "Chocolate Lover" sheet cake, with chocolate mousse, chocolate truffle and chocolate genoise - delicious! 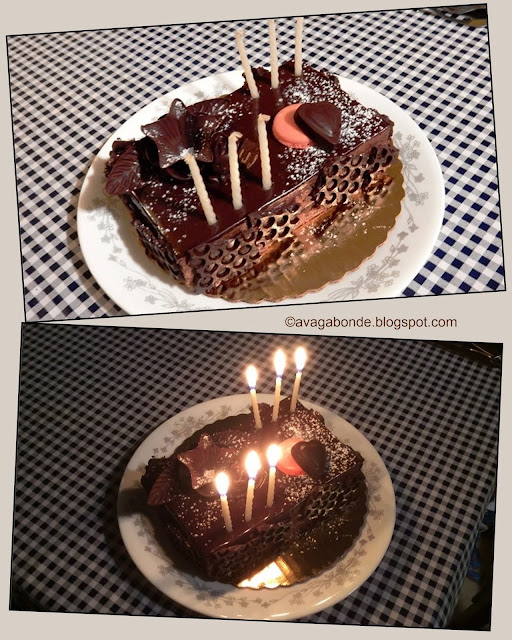 As I mentioned before, we live northwest of Atlanta in Cobb County.  We are located in the west part of the county and are between 6 and 8 miles from five small towns: Marietta, Kennesaw, Acworth, Powder Springs and Dallas (in the adjoining county of Paulding,) so there is a good choice of restaurants.  Last year for my birthday we went to an award winning Louisiana restaurant in Acworth called "Henri Louisiana Grill."  It had great atmosphere and excellent cuisine.  It is in downtown Acworth across the railroad.  There were blooming trees along the railroad tracks at the time, and I took their picture, of course. 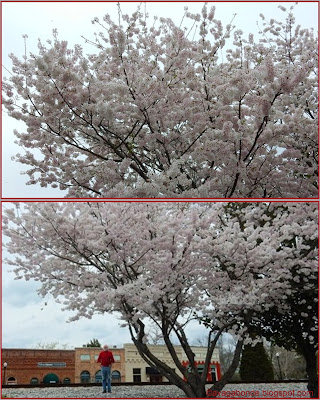 The azaleas in our backyard are in full bloom.  Yesterday the weather forecast predicted heavy rain with strong winds and even a threat of tornado.  I took several pictures before the rain came. 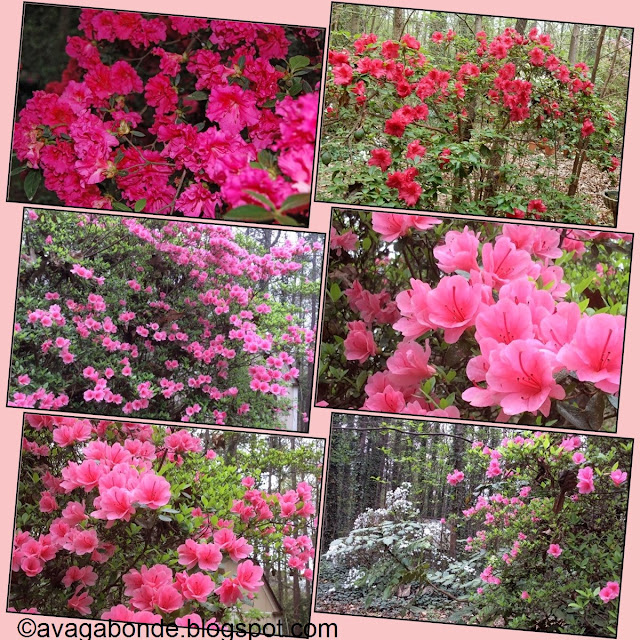 We have three azalea bushes - pink, bright red and a white one.  The white shrub this year is especially nice.  I took several photos with my iPad.  I wish I could take these azaleas to Nashville whenever we move there.  Have any of you, with a green thumb, been successful propagating azaleas with cuttings?  Any tips? 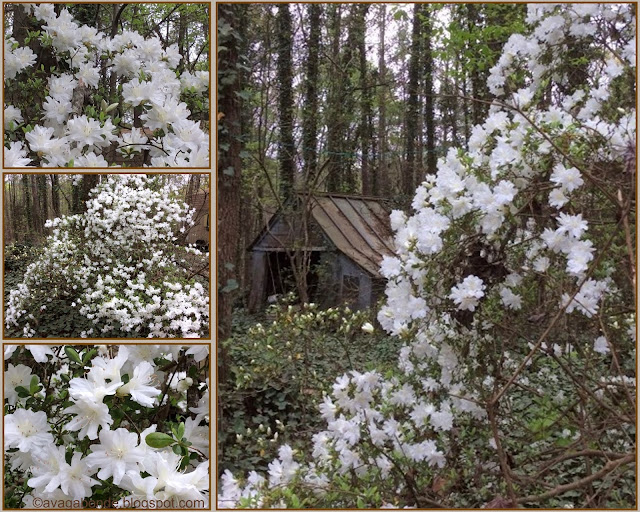 As I was snapping photos of my azalea bushes I could hear Canada geese calling - they were flying toward me.  I aimed my iPad to the sky and was lucky to catch them.  They were flying high so my photos are not very clear, as I did not have time to adjust the iPad. 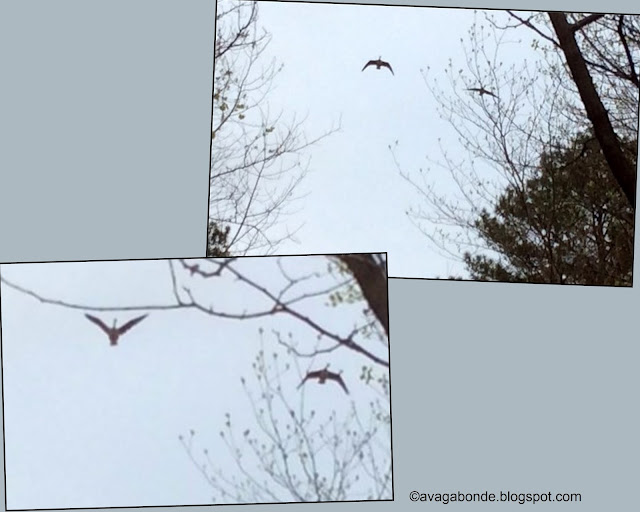 I almost forgot - my blog was started in 2009 when we visited our daughter for my birthday.  She  was living then in Long Beach, California.  So my blog anniversary coincides with my birthday.  It is hard to believe that I have been blogging for seven years and am now starting on my eighth year.  Time has gone quickly.  I have enjoyed the comments from many wonderful blogging friends, visiting their blogs and meeting some of them, too.  I thank you all for making blogging so much fun for me.  For now, I'll end with an haiku by Kobayashi Issa (1763-1828.)  He was better known as Issa, a pen name meaning Cup-of-Tea.  He was a Japanese poet and lay Buddhist priest.


Spring breeze -
the pine on the ridge
whispers it

Below is a wood block print by Benji Asada, a painter and print-maker from Kyoto, Japan (1899-1984) entitled The Pagoda of Ninnaji Tanyu. 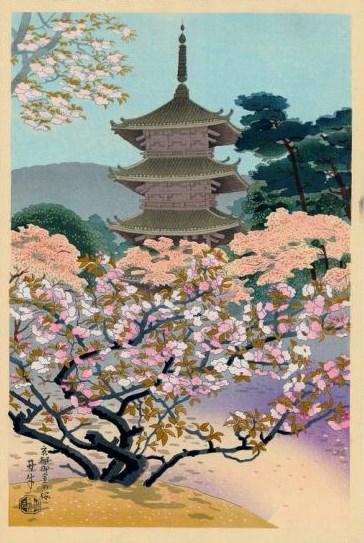 In my next post, I'll go on with the second part of the Bulloch Hall quilt show. 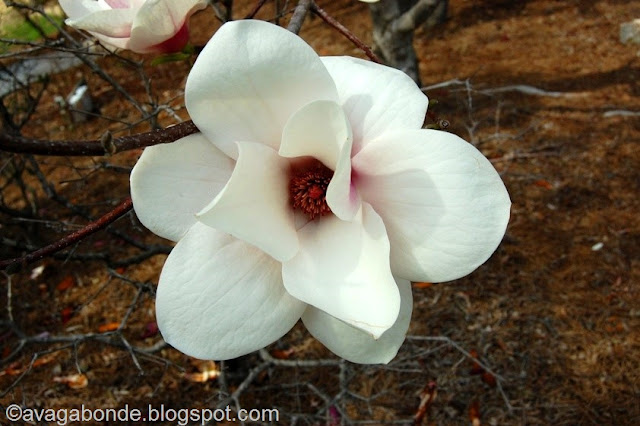