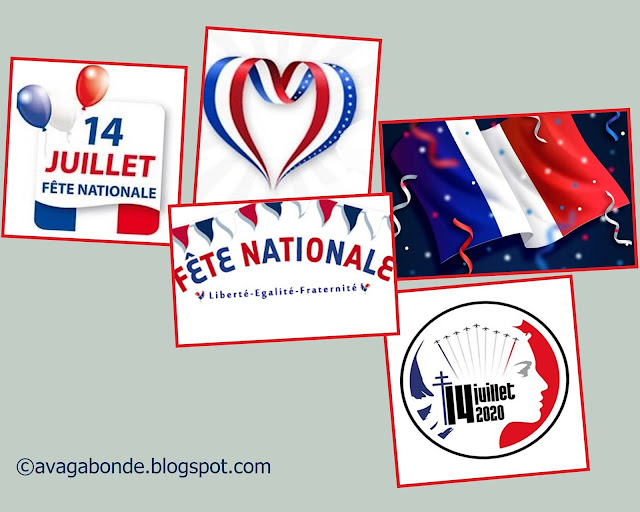 My next post was to be about conversations I had with my friend Naomi Caryl Hirshhorn.  Since many of my readers may not be familiar with her I started reading her old blog and taking notes for my post.  She wrote her blog for over ten years and included many posts, so reading them kept me busy for quite a while.  But then we arrived at the 14 of July and a special post was necessary -:)  This year our 14 July National Day celebration had a reduced format with a parade closed to the public but broadcast on television.  Many Paris town halls sent notices to respect the novel coronavirus safety rules.

The Bastille Day parade down the Champs-Elysee was cancelled, a first since 1945.  It was replaced by a small ceremony at the Place de la Concorde, without vehicles, and with only 37 detachments.  It started by a tribute to former French President Charles de Gaulle.  The year 2020 is the triple anniversary of his birth 130 years ago, of his call to resist on 18 June 1940 and fight France's Nazi occupiers thus starting the French Resistance and of his death in 1970.  French President Macron said "Nous commémorons la figure du général de Gaulle, qui n’a cessé d’agir pour la souveraineté de la France. - / 'We commemorate General de Gaulle, who acted continuously to keep France's sovereignty."  In case you have not read it, I wrote a post in 2014 detailing General de Gaulle's actions during WW2 and the liberation of Paris, click here to read it. 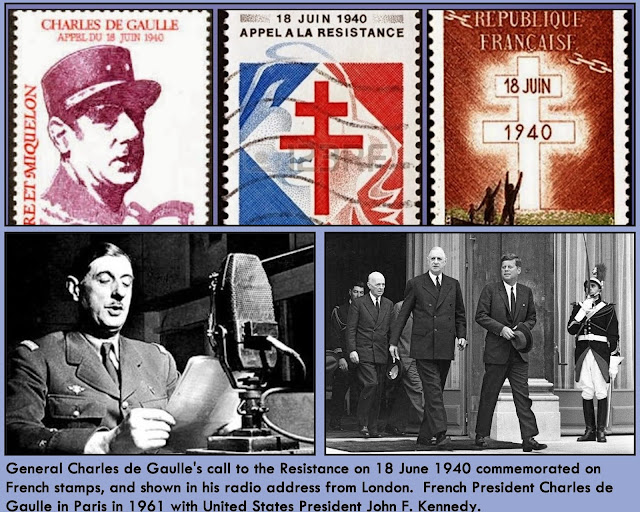 The novel coronavirus outbreak being the primary focus, the second part of the ceremony was particularly addressed to the medical staff and soldiers mobilized during the COVID-19 crisis.  Emphasis was given to Operation "Resilience" that enabled the setting up of field hospitals and the transfer of patients.  President Macron called the ceremony "the symbol of the commitment of an entire nation and of our resilience."  He also said "Exceptionally, this year, our armies ... will cede the primary place to the women and men in hospital coats who fought the novel coronavirus and who remain "ramparts in the crisis."  Invited among all the guest were 1400 persons representing the essential French workers on the front line during the pandemic: health providers, caregivers, families of caregivers who died from the virus, teachers, cashiers, funeral officers, police, gendarmes, firefighters, mask making factory workers, test giver staff, etc. The event slogan was une nation "engagée, unie et solidaire" - "a nation "committed, united and supportive."  It was not open to the public, but broadcast on television.  (Click on collage to enlarge.) 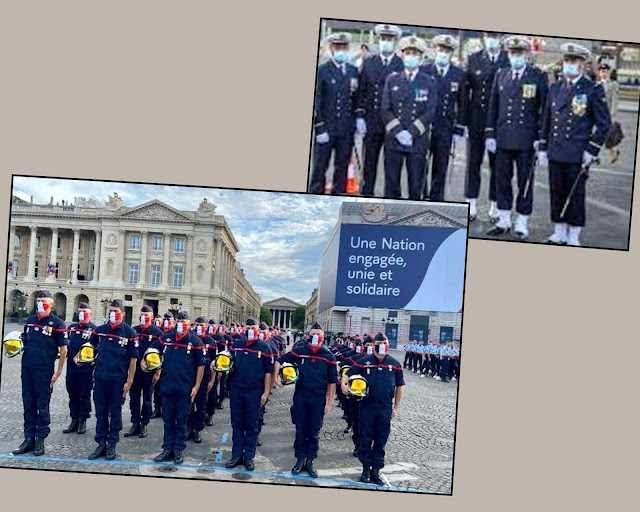 Four foreign countries were invited in gratitude: Germany, Austria, Luxembourg and Switzerland.  The French Minister of the Armed Forces said they "were invited to thank them solemnly for their help during the crisis."  "Due to saturation from hospitals in the Grand East region of France, French patients were able to be cared for thanks to their assistance."  The patients were evacuated from the eastern part of France via air, rail and boat to these countries.  (Most photos courtesy France 2 TV, Le Parisien, Nice-Matin, Internaute, Sortir Paris, RTF and from videos on my computer.) 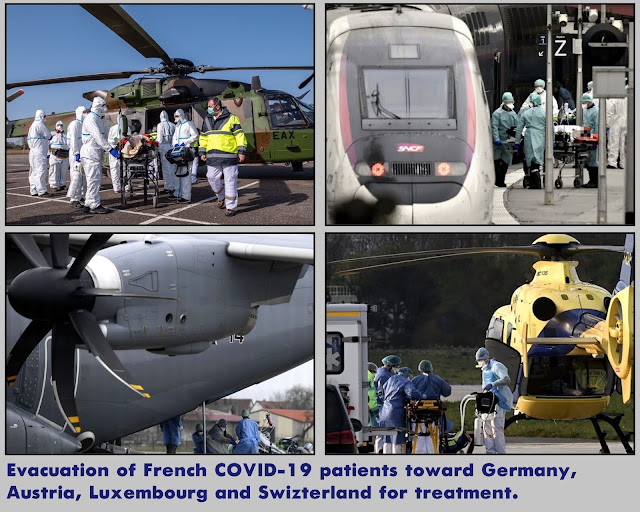 The festivities started with a sustained aerial parade, opened by nine Alphajets of the Patrouille de France (French Patrol) with their famous tri-color smoke bombs.  About fifty aircraft (some with caregivers aboard) were in the air parade, including an A330 MRTT that had evacuated patients with COVID-19 and an A400M Atlas from the German Air Force that had transferred patients from Strasbourg to Ulm.  They were followed by 20 helicopters that had evacuated patients.  The mini land parade included troops from the Army Medical Corps (mobilized to open resuscitation medical structure under tent in Mulhouse) the 2nd Dragoons Regiment, specialized in radiological, biological and chemical threats - they provided disinfection of infrastructure and COVID-19 patient transport.  Also included were firefighters from Marseille and crew members of helicopters who conveyed medical equipment and reinforcement overseas.  Most everyone was observing social distancing. 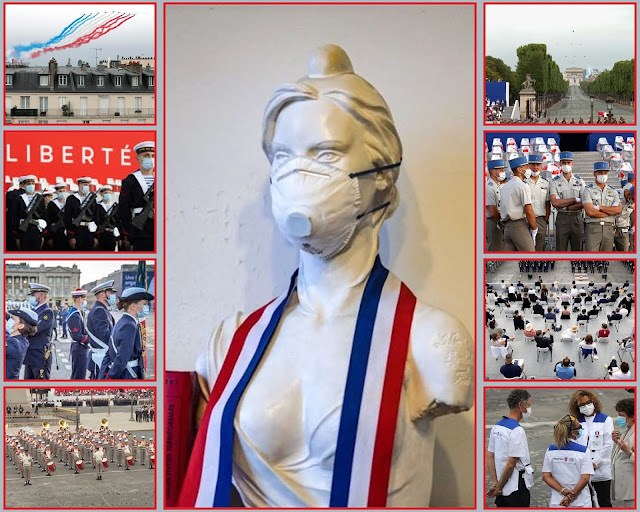 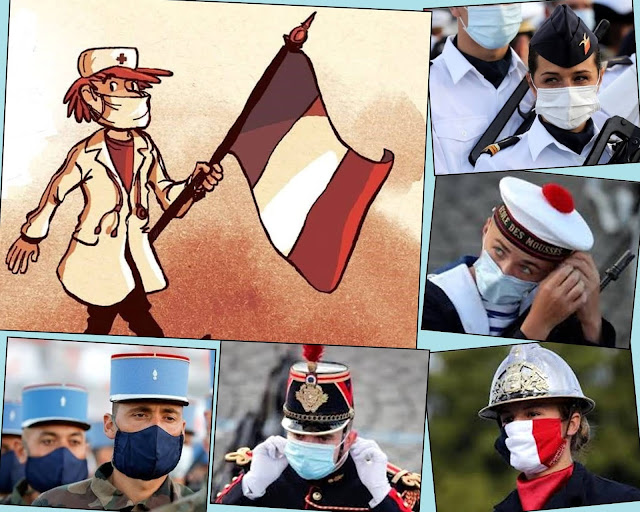 At the end of the parade, caregivers in white coats joined the soldiers to the standing ovation and strong applause from all the attendees, while a huge blue-white-red flag was deployed to the sound of the French National Anthem, the Marseillaise. 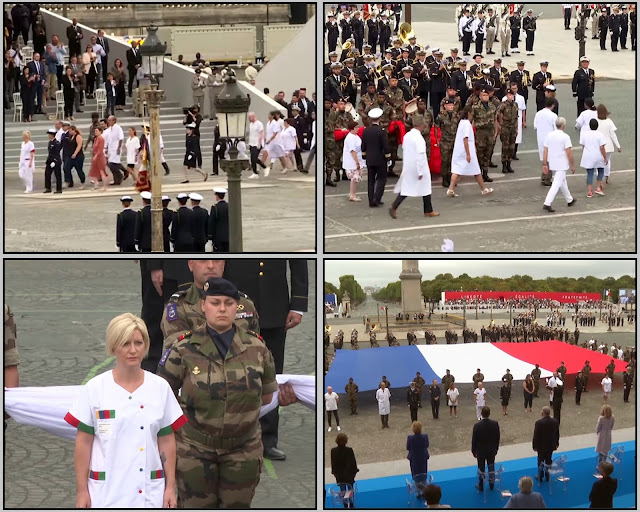 Finally, the French air patrol made an exceptional second fly-over leaving behind a white trail in honor of health and essential workers.  For the 4th July here in the USA, Independence Day, I read that President Trump had hosted a "Salute to America" with a fly-over and bands.  But I did not watch it so I don't know if he mentioned and thanked healthcare and essential workers, do you know? 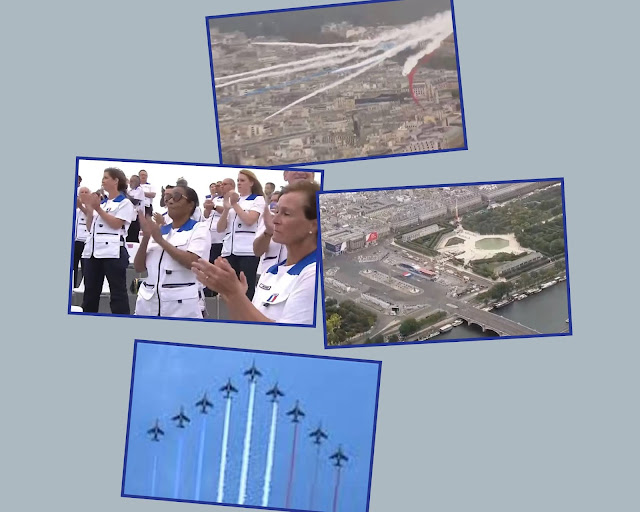 Following the scaled-back Bastille Day ceremony French President Macron gave a long televised interview.  He announced a "massive" recovery plan which would reach €100 billion ($114 billion,) on top of more than €460 billion spent so far to limit the economic damage of a costly two-month lockdown.  His government has agreed to give pay raises worth €8 billion ($9 billion) to health workers, as he hailed their role in fighting the pandemic.  I watched part of the interview on French TV, but it was long.  He also said: "On peut critiquer. Moi, je suis pour le débat.  La haine, le discours radical, la brutalité, je crois que ça ne fait pas partie de la vie démocratique et que ça affaiblit plutôt une démocratie." - "We can criticize, I am all for the debate.  Hatred, radical discourse, brutality, I believe are not part of a democratic life and they rather weaken a democracy."  President Macron also ordered that mask wearing be mandatory next week for everyone in indoor spaces such as offices and stores, as it is now for outdoor places, to avoid a rebound in COVID-19 cases - a €135 ($155) fine may be imposed for non-indoor mask wearers as it is now for non-outdoor mask wearers. 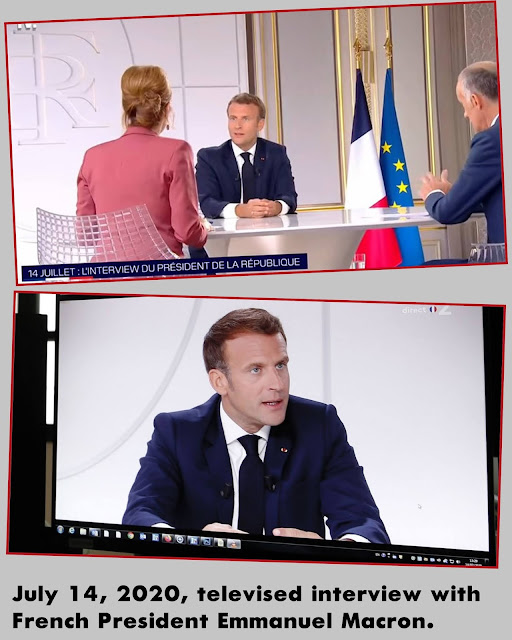 A while back President Macron invited Dr. Christian Chenay to a dinner party at the Elysee Palace in Paris.  Dr. Chenay at 99 years of age (born June 21, 1921) is the oldest practicing physician in France.  Christian Chenay continues with his consultations, twice a week in his office (with no prior appointments) or at a Christian mission, and by visiting nursing homes.  He says "If we stop, we decline very quickly.  I'm better off being a doctor than playing bingo or sudoku with 60 year old age groups and becoming an idiot."  Though he has only a fax machine and a computer on his working desk with no high technical surgery equipment, Doctor Christian Chenay says he updates himself with Online Journals.  After his wife died in 2002 he remarried in 2012, at 91, with Suzanne, a 70 years old Vietnamese Buddhist.  His commitment to serving others for so many years was praised by President Macron who said "The example you give is truly inspiring." 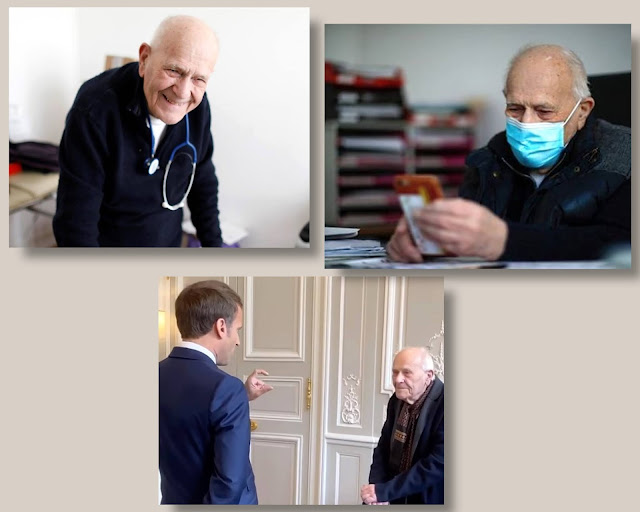 The Concert of Paris was given at 9 pm on July 14th at the foot of the Eiffel Tower.  The program included international artists, such as soprano Fatma Said from Egypt.  Korean maestro Eun Sun Kim conducted the National Orchestra of France and the Radio France Choir in a medley of music:  Edith Piaf Hymne to love, music by Verdi, Berlioz, Tchaikovski, West Side Story of Leonard Bernstein, Beethoven's Egmont Ouverture, Gounod, Charlie Chaplin's City Memory, Lalo, Catalini, La Boheme of Charles Aznavour, Serrano, Ravel and Mozart's Concerto #23.  It ended with La Marseillaise sang by Angelique Kidjo, from the Republic of Benin (West Africa) who was born there on July 14, 1960.  She is a 4-time Grammy Award singer, songwriter and is also an activist. 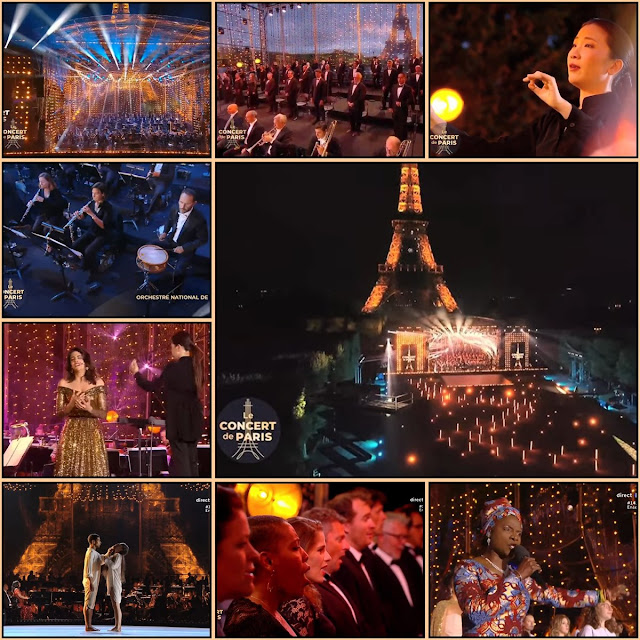 After the concert came the traditional fireworks offered by the City of Paris.  This year the theme was "le symbole de la résilience de notre capitale et de notre Nation et un hommage à tous les héros du quotidien qui ont œuvré pendant la durée de l’épidémie.  " - "the symbol of the resilience of our capital and our nation and a tribute to all the everyday heroes who labored during the pandemic."   As usual the fireworks were fired from the Champs-de-Mars.  However, since it was not safe to have a large crowd in attendance, the public was invited to watch the show from adjacent streets, windows, balconies or on television and internet.  Some spectators did watch from the banks of the river Seine and from the hills of Montmartre.  Most large cities had cancelled their fire works such as Marseille, Lyon, Toulouse, Strasbourg, Nice, Bordeaux and more. 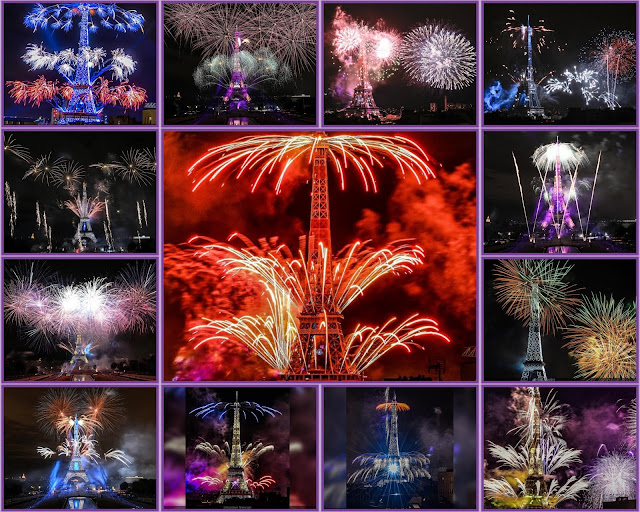 Even from a distance the fireworks on the Eiffel Tower in Paris had been breathtaking.


Still, this had been an unusual 14 July National Day, indeed. 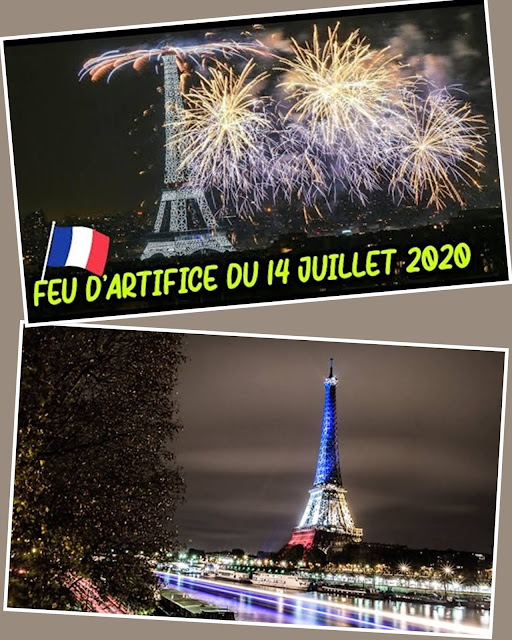