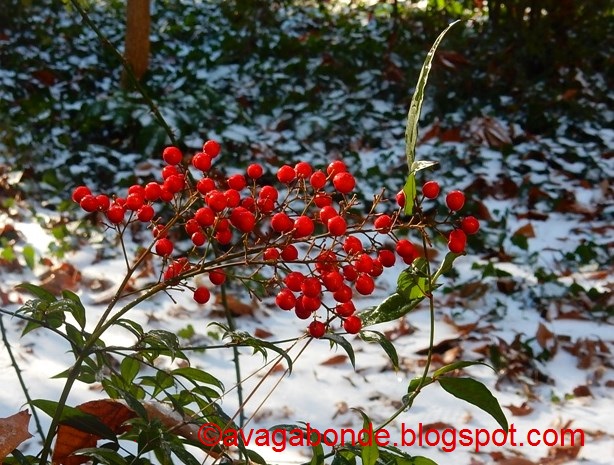 Hopefully, everyone enjoyed their Christmas or any other holiday they celebrated, and the end of year festivities.  Since my husband, because of his illness (Alzheimer's,) did not know what season it was I had not planned to do anything for Christmas.  But then ...listening to Christmas music, reading holiday blogs and seeing all the bright lights everywhere I decided to get a little Norfolk Pine plant and decorate it.  (Click on collage to enlarge.) 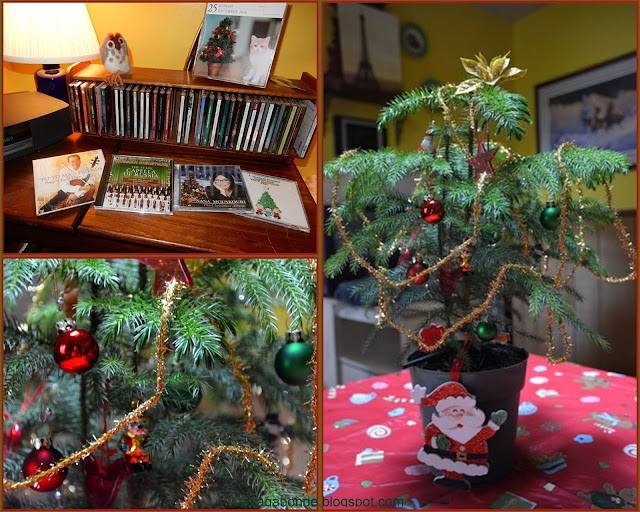 Our Christmas ornaments were away in boxes plus they were too large for the little tree.  I found the ornaments bought a couple of years ago in St. Petersburg, Russia, but the little doll ornaments in folk dresses were too heavy.  I then placed my wooden matryoshka nesting dolls in front of the tree until our cats thought they were cat toys and started pushing them around ... 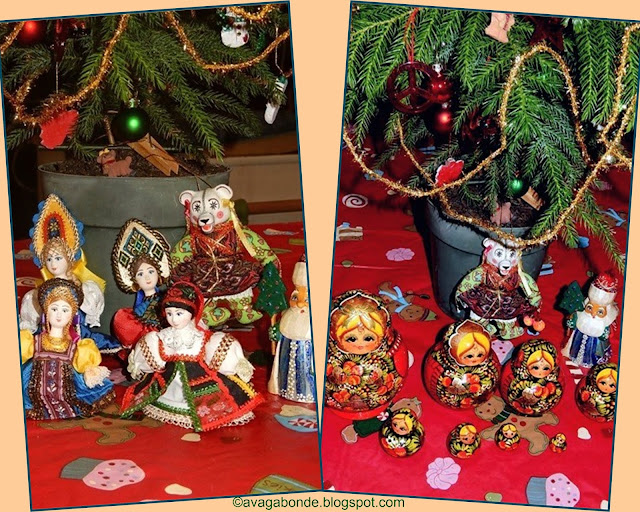 I bought a 2017 cat calendar for my husband - each day a new cat!  We bought some pecan pralines for us and as a treat to myself I bought some French imports from Le Marché  shop in New York: my favorite Amora mustard for my vinaigrette, some specialty hard candy "Bergamot de Nancy," some
bouchée from Suchard - they are dark chocolate you can buy by the piece in French grocery stores.  I could not pass up a 1980s vintage mystery paperback in a second-hand bookstore. We received some good candy and other gifts from family as well.  My French blogging friend, Claude, sent me a couple of souvenir magnets, very useful hot pads and tricolor paper napkins (to be used on the 14th of July! (Bastille Day.) 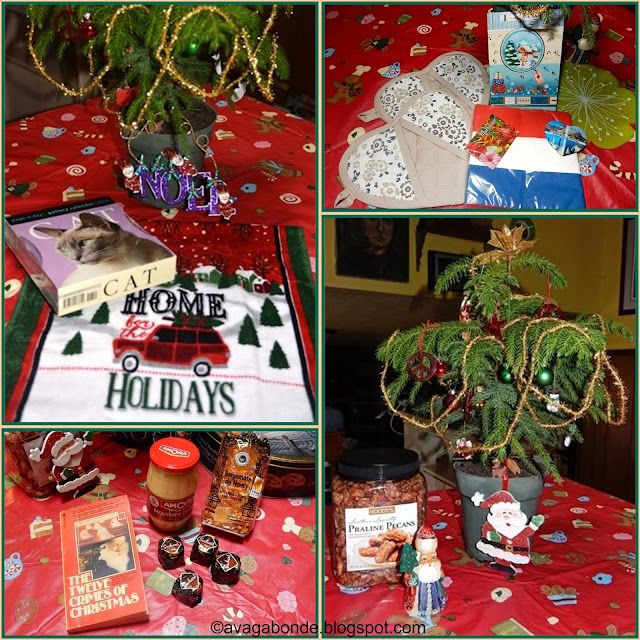 So that Mitsouko, our Grey Korat, would not bother our little tree I had to place on my iPad cat videos that she loves to watch. 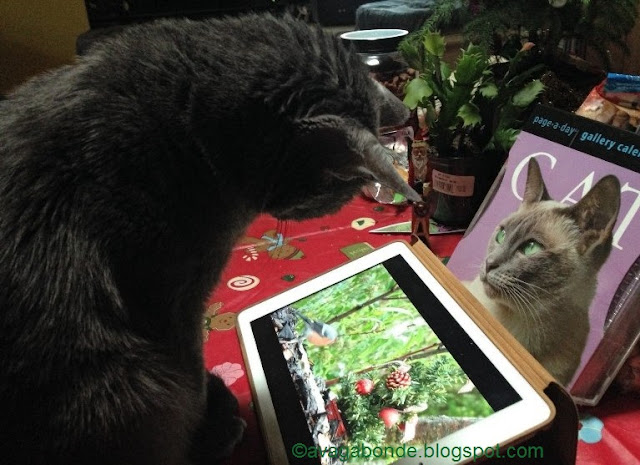 The decorations were not removed from our tree until yesterday, January 7th, in honor of my late father who was an Armenian Christian Orthodox.  As I mentioned in earlier posts, while Christmas decorations have been taken down in the USA and many countries, other countries following the Eastern Orthodox Church, such as Armenia, Russia, Ukraine, Serbia, Georgia, Belarus, Kazakhstan, Macedonia, Moldova, Montenegro, Ethiopia, etc., celebrate Christmas on January 6 and 7th according to the Julian calendar.  The Julian calendar pre-dates the more commonly observed Gregorian calendar.  (I explained this in my post of January 2011, click here to read it.)  Below is an Armenian Christmas card (written in English and Armenian) I received on January 6th.  Next to it is the Holy Etchmiadzin, the Armenian cathedral located near Yerevan, the capital of Armenia.  Bottom left is Russian Ded Moroz (Grandfather Frost) next to his grand-daughter Snegurochka (Snow Maiden.)  (See more on them in my post of January 2015, click here to read it, although in Russia New Year is a bigger holiday.)  Bottom right is a group of Ukrainian ladies celebrating Christmas in their folk dresses. 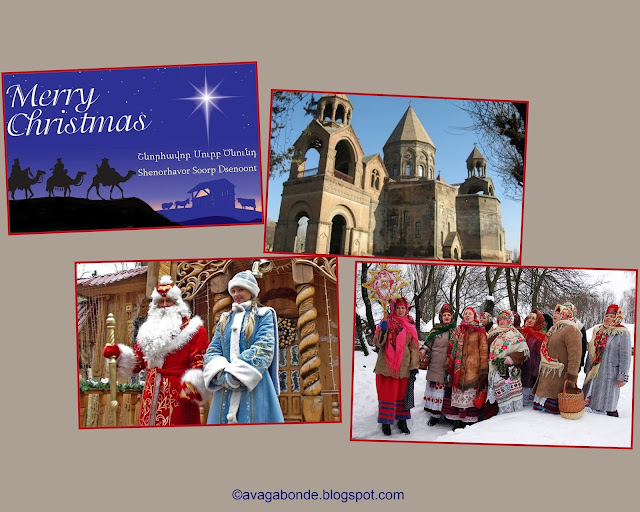 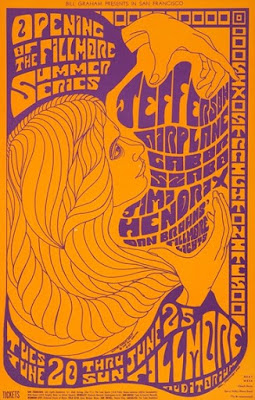 We also lost Papa Wemba, a Congolese singer and musician, called "The King of Rumba Rock" - I have several of his CDs.  Another terrible tragedy was the loss of 64 members of the Alexandrov Ensemble, also known as The Red Army Choir.  The choir was founded in 1928 by composer and conductor Alexander Alexandrov and has a worldwide reputation for excellence.  The Ensemble had been dubbed "Russian's singing weapon" by British Prime Minister Winston Churchill after he assisted at their performance at the Yalta Conference in 1945.  I have several of the choir's CDs, too.  They have powerful voices; there are also dancers in the group.  (Photos courtesy Alexandrov Ensemble.) 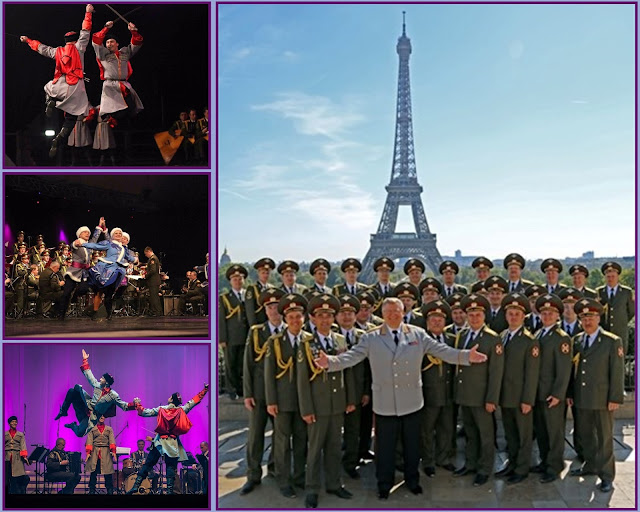 At the end of my 29 December 2013 post I mentioned that we had seen a Russian choir in Atlanta and attached a video of one of my favorite Russian's folksongs, The Monotonous Little Bell.  I wrote down the lyrics in French and English (click here to see them.)  I had noted then that it was a melancholy song - a song of remembrance.  This folk song is also in the Alexandrov Ensemble's repertoire - listen to it below.  Isn't it beautiful?  (Photos by Alexander Shadrakova.)

Another personality we lost in 2016 was David Bald Eagle, a Lakota Chief.  He passed away at age 97 after a long and extraordinary life.  He was born in a traditional teepee on the Cheyenne River Sioux Tribe Reservation in South Dakota.  He only spoke Lakota until he was 12 and at 15 he underwent the traditional Sundance ceremony.  During WWII he was awarded the Silver Star for fighting at Anzio, Italy.  Afterward he parachuted into the fighting in Normandy, was injured by German soldiers and saved by British commandos. 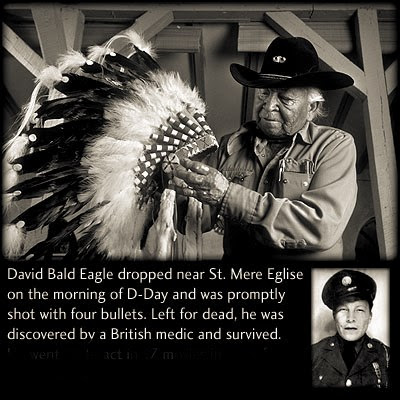 He married an English teacher and they became ballroom dancers.  Unfortunately she died in a car crash.  David Bald Eagle then took up skydiving and was a stunt double.  He also drove race cars and was in the rodeo circuit.  He toured in a Wild West Show as a rodeo performer and while in Brussels at the World's Fair in 1958 he met his second wife, Josee Kesteman, a young Belgian actress (seen in collage below.)  Bald Eagle appeared in over 40 Hollywood films including "Dancing with Wolves."  He achieved more than I can tell here and had an outstanding long life, well lived. 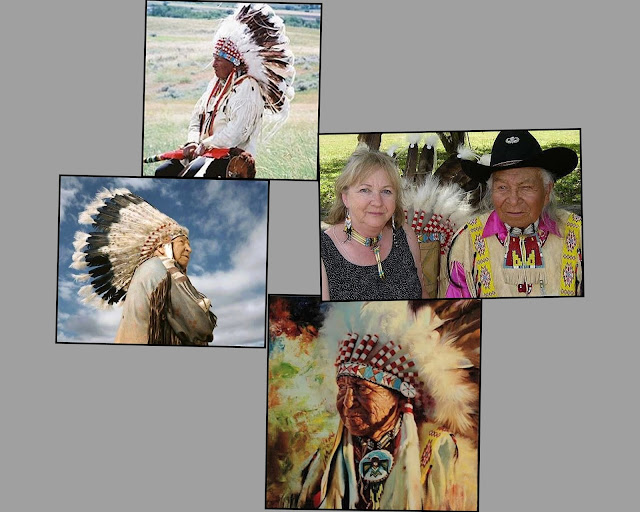 On television I watched the celebrations and fire works for the end of 2016 and the start of 2017. 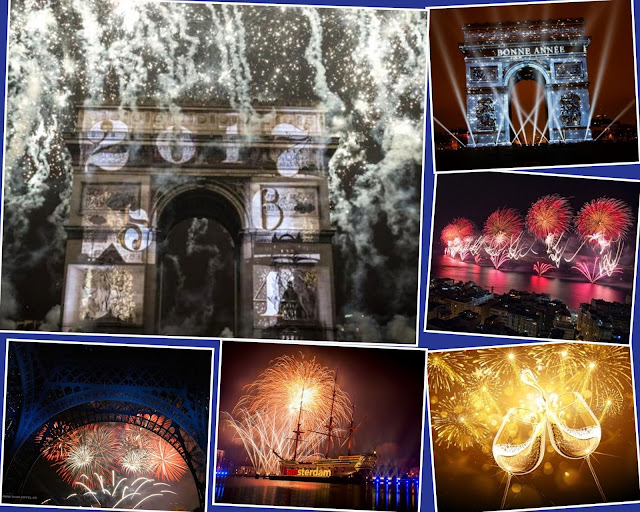 On New Year's Day I made the traditional Deep South recipe to bring us a prosperous year with good health and good luck: Hoppin' John with collard greens and cornbread.  Hoppin' John is made with black-eyed peas, rice and bacon or smoked turkey (I have my own recipe.)  Black-eyed peas being for coins, collard greens - green being the color of money, and cornbread which is the color of gold ... we usually pour some spicy pepper sauce on the collard greens.  I started making this dish for New Year way back when we moved to Georgia and have made it every New Year's Day, except one year we were in Columbus, Ohio, and I could not find fresh collard greens there and last year when I was in bed with pneumonia.  The next night I was not too hungry so used the "pot liquor" or pot likker - it is the brothy juice left from cooking the collard greens.  It is full of nutrients and is very tasty.  Now for y'all not to believe that I have lost all my French ways, I did start the meal with a little bit of "pâté de campagne"(country paté) and "cornichons" (French sour pickles) and ended with a piece of Camembert cheese - both with crusty French country bread and a glass of red wine ... voila! 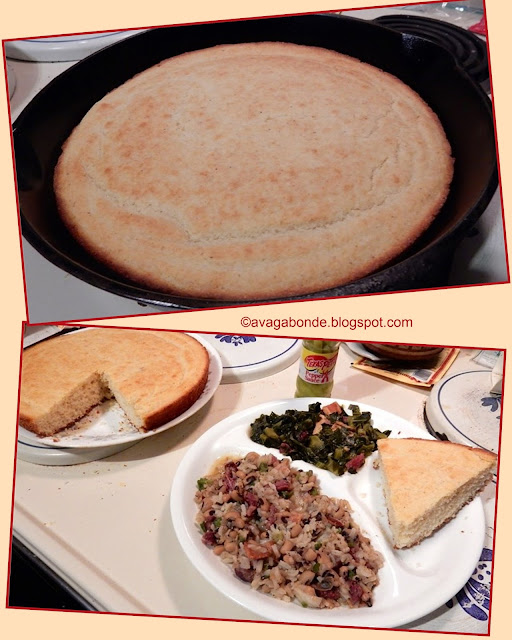 On January 2nd, I watched the Pasadena Rose Parade.  The Armenian Rose Float presented "Fields of Dreams."  It was the 2017 winner of the "Past President's Trophy" for the most creative use of floral and non-floral elements.  It comprised 18,000 white and red roses and other flowers near the rendering of Mount Ararat.  Other elements such as pomegranate, lentils and nuts covered the Artsakh stallion. 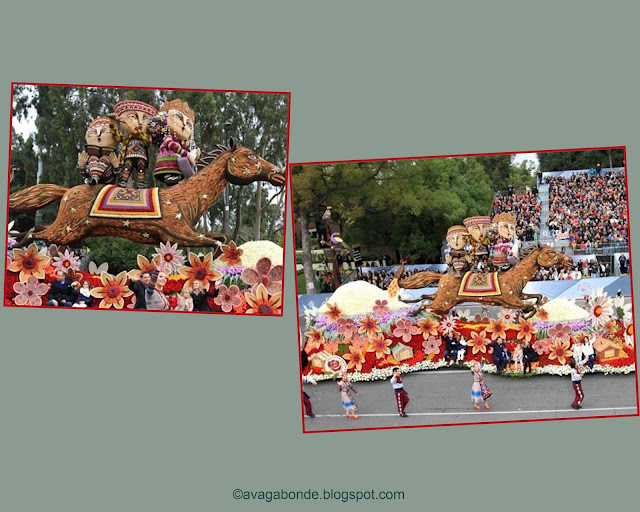 Now it was time to remove our old calendar and replace it with the new 2017 calendar.  We went from St. Petersburg, Russia - a calendar I bought a couple of years ago there, to a new Pittsburgh, Pennsylvania, calendar that our daughter Celine sent us.  She moved to Pittsburgh after her July wedding and is hoping to entice us to visit her.  We will but not now when it is so cold there (a blustery 14 F (-10 C) feeling like 0 F (-17.7 C) today, Sunday January 8, 2017.) 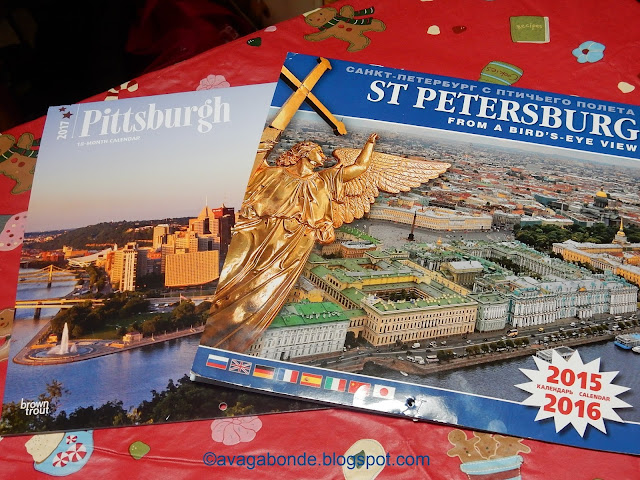 Actually today is also the coldest day in Georgia at 28 F (-2.2 C.)  It snowed a bit during the night of Friday to Saturday.  Saturday morning, January 7th, I took some pictures in our backyard.  The snow was not deep but the surface had a sheer layer of ice on it.  It was very sunny though. 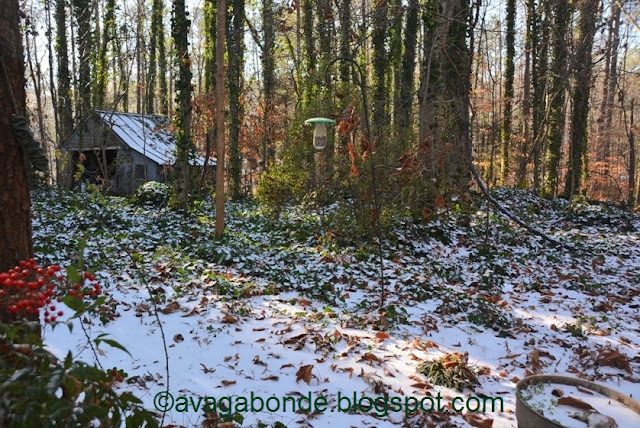 It was so sunny that our cat Cody decided to jump back by the window-sill for a nap.  No birds were close by although I could see by their tracks that they had tried to get some water from the frozen bird bath. 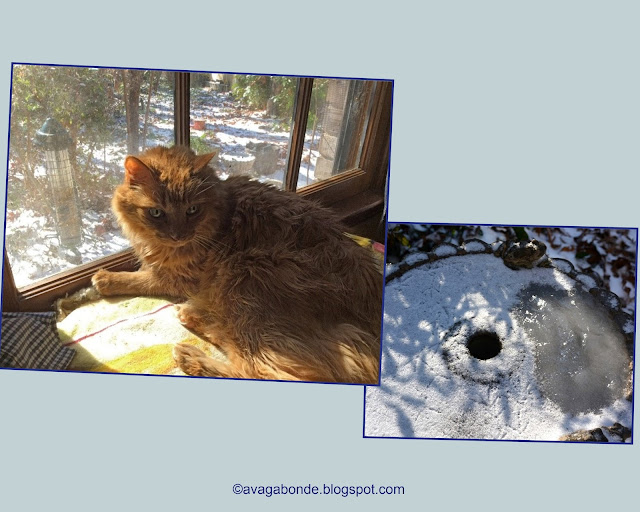 Today, from the computer room upstairs I can see the front and side of the house.  It looks the same as yesterday - light snow on the ground, full sun and no traffic.  People have been told to stay indoors because there is "black ice" on the roads.  This is what happens when the sun hits the surface of the roads and melts the top of the snow.  It ices again and becomes invisible.  It is a real hazard when driving. 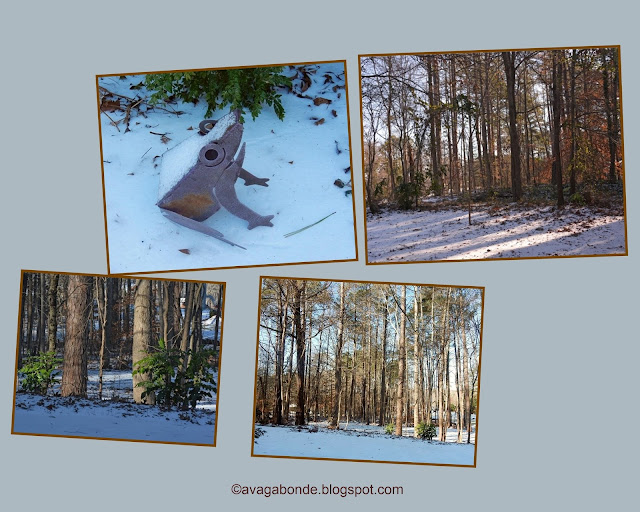 But in Georgia the weather warms up quickly.  We will be back in the 60s F soon, and 66 F (18.8 C) is predicted within four days, on Thursday January 12, 2017.  Sunshine, blue skies and a good year ahead, that is my wish for all of you.  Let's look forward to 2017, hoping for less noise and more joy.  We need to look and see the beauty that is all around us and also remember that we live on the same planet and need to take care of it.  The French fleur de lys vintage postcard below says "On vit de souvenirs et d’espérance" - we live from memories and hope. 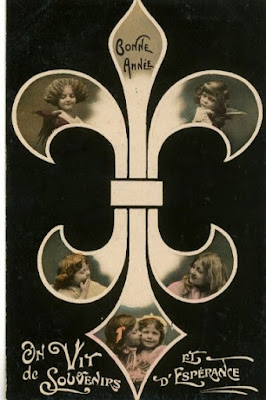 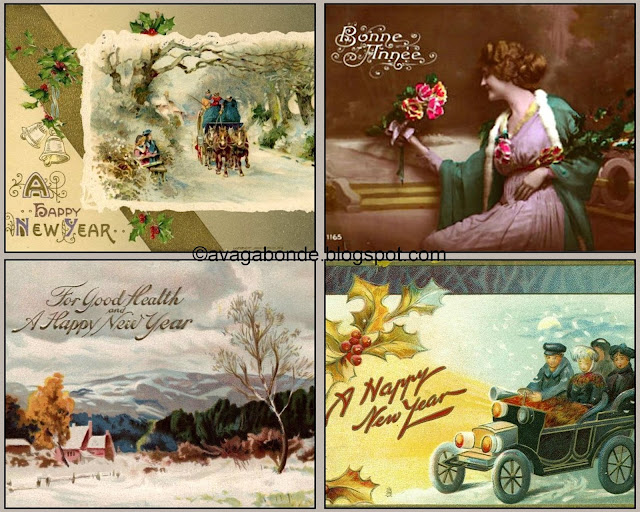