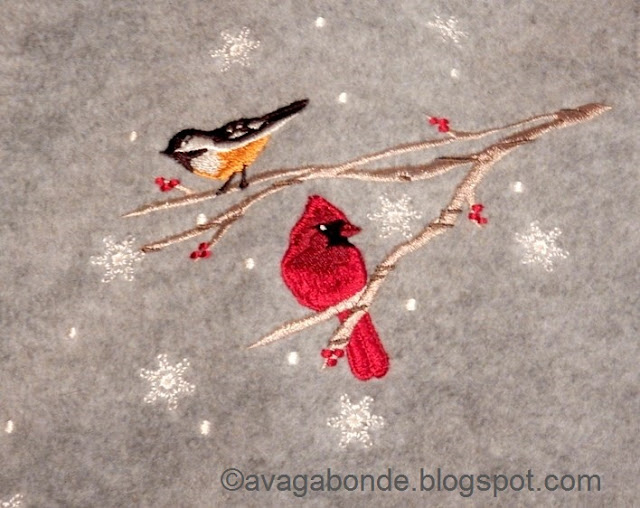 January is almost over, already.  I hope you all had a Merry Christmas and a Happy New Year celebration.  Here, we had neither.  In my last post I mentioned that I had been battling what I thought was a strange "chest cold."  My primary care doctor was not available, so I made an appointment with someone else in his office, but that day, December 22, we decided to visit Bulloch Hall so I could take pictures for a post, and I cancelled the doctor appointment.  After the trip to Bulloch Hall and writing my post it was almost Christmas and by then I was even weaker and could not think of driving to another county, on the freeways, for a doctor's visit (my husband does not drive anymore.)  From then on I was in bed every day including Christmas.  The only decoration I saw was the embroidery on a holiday jacket that I wore in bed as I had severe chills. 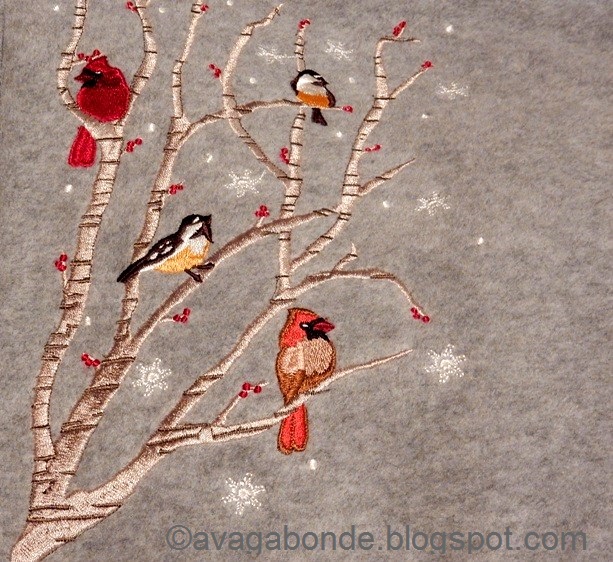 On Christmas morning I did get up to make coffee and toast for my husband and me, but went back to bed.  For dinner every night my husband ate Chinese food delivered from a restaurant nearby and I ate Chinese noodle soup.  On New Year's Day I tried to watch the Pasadena Rose Parade on TV and did take a couple of pictures - one of the Armenian float and the other of the Downton Abbey float, but then had to go back to bed.  (Click on collage to enlarge.) 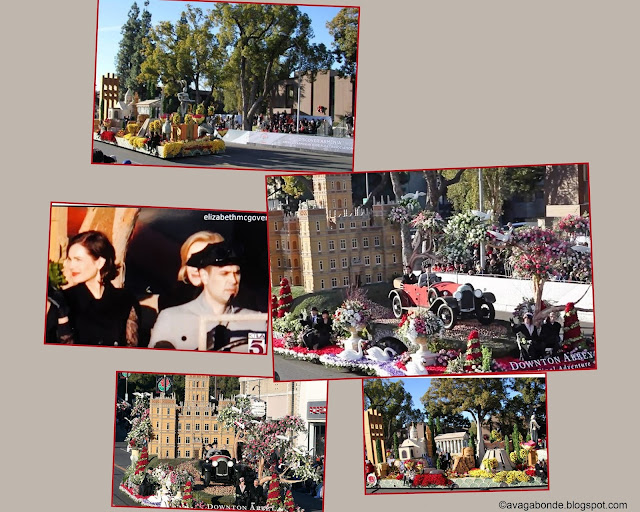 At first I had looked up my symptoms on the web and decided that I had acute bronchitis.  After that I did not look at the computer at all.  I would not mention my illness here as I know this is not a fun subject, but I am doing it to avoid someone making the same mistake as I did.  This last week I took my husband to his pulmonary/lung doctor for his sleep apnea check-up.  When the doctor asked me how I had been feeling, I told him I was in bed 3 weeks with bronchitis.  He asked me if this had been the diagnostic from my doctor - I answered that I had self-diagnosed with help from the web.  After listening to my symptoms he said that it sounded not like bronchitis but pneumonia.  He was not happy that I had not gone to a doctor.  He added that with complications it could have been very serious - to life threatening.  Frankly, I never thought about pneumonia, so I did not look it up.  So, if you cough almost continuously until you nearly lose your breath, with chest and abdominal pains and lungs feeling crushed, bloody mucus, difficulty breathing, shortness of breath, shaking chills, extreme weakness and fever, lack of appetite and nausea - that could be pneumonia and you better see your doctor.  Apart from being extremely weak and unable to sleep because of the noise from my lungs when I breathed, I was not upset about missing out on the holidays.  There was no one at Christmas time around here I could ask for help, so being optimistic I thought I'd get better soon.  Older daughter was in Pennsylvania and younger daughter was in Paris with her family.  She sent me photos on her cell phone.  I was happy to have Paris on my cell phone in bed with me.  Here are some of her photos (oldest grandson is in front of Notre Dame de Paris on Christmas Eve.) 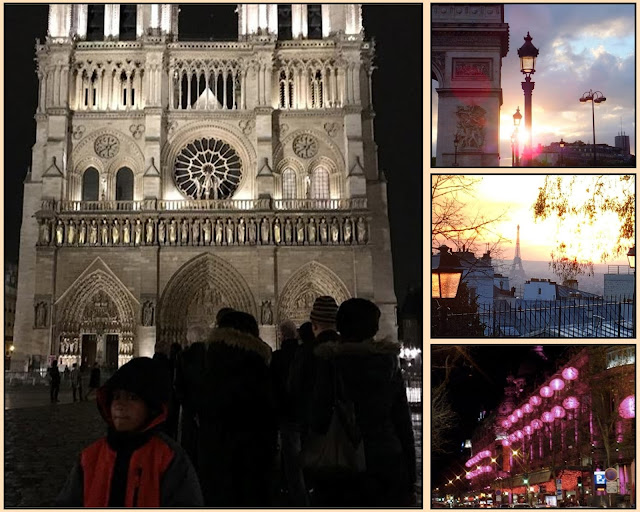 After Paris they flew to Kochi, South India, to visit son-in-law's relatives.  It sounded like a great trip.  Then they came back through Sri Lanka, Rome and a stop in Venice.  They said that Venice had very few tourists - Piazza San Marco was almost empty.  Take note - the week after New Year is a good time to visit Venice, Italy. 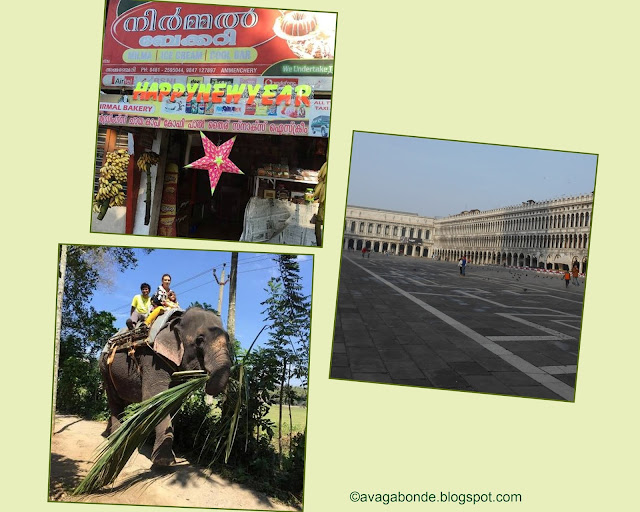 I guess I was lucky that I became better by myself.  In a way if I had known I had pneumonia I might have become sicker, thinking about the consequences.  I think good and bad thoughts affect our health.  I never wish to lose control and always refuse to listen to the blues.  I do not like self-pity as it brings a lack of compassion toward others (as one is more into their own problems.)  I could not control being sick, but I certainly could control my response and attitude to it, don't you think?  In a way I felt lucky to have time to read some books.  One was about France after WWII (but it also included what had happened during the war as well.) Conditions had been terrible there for many people that, in comparison, the pain in my lungs did not seem hard to bear.  Because of his Alzheimer my husband was a bit confused.  He stayed in the kitchen watching TV, then when I came down at night to help him with his Chinese dinner, he always asked me why I coughed so much ... but he never complained about eating Chinese food for 3 weeks!   The cats kept him company but he did not enjoy staying inside alone for so long. 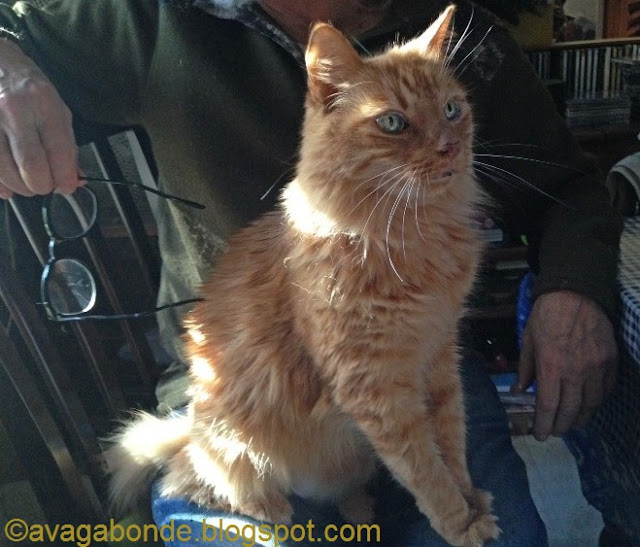 During the holidays the weather here had been warmer than usual - up to 78 degrees F on Christmas Day (25.5 C.)  Even though I could not get out, just looking at the sunshine pouring into my room made me happy.  That made me think of John Denver's song - do you remember?  "Sunshine on my shoulders, make me happy ... Sunshine in my eyes can make me cry ... Sunshine on the water looks so lovely ... Sunshine almost always makes me high." 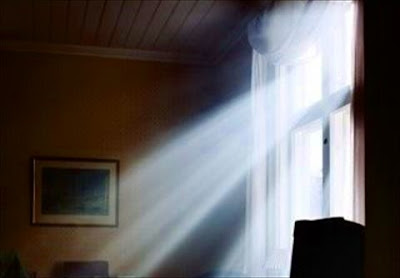 Last year in January I had written in my post that the Cobb County Water Commission was going to cut many trees along the road including on our property.  See my post here.  They did start the process the second week of January.  I heard their heavy machinery chopping our trees down - it did hurt when another huge pine tree came down and shook the house.  I went out to take some last quick photos of the hemlock we had planted after Christmas so long ago, and the Oregon Ivy near it, that was already blooming.  I told the tree how sorry I was. 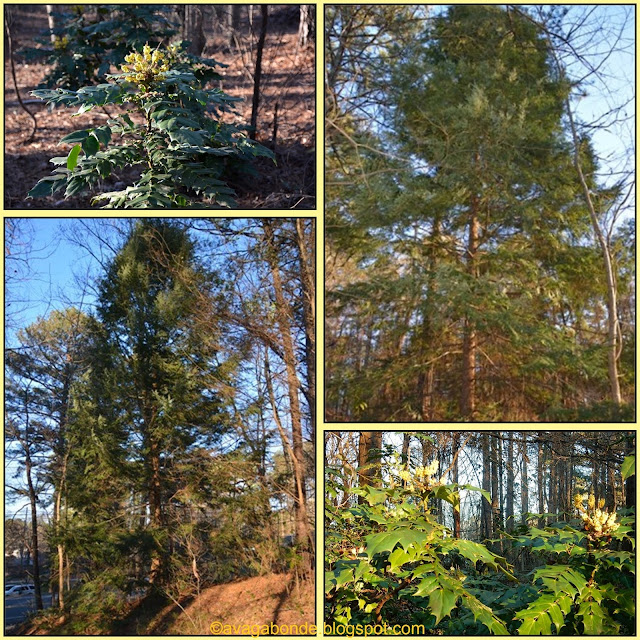 I cut some foliage from the hemlock tree and placed it into a vase.  Below is the vase shown in our back yard and inside the house. 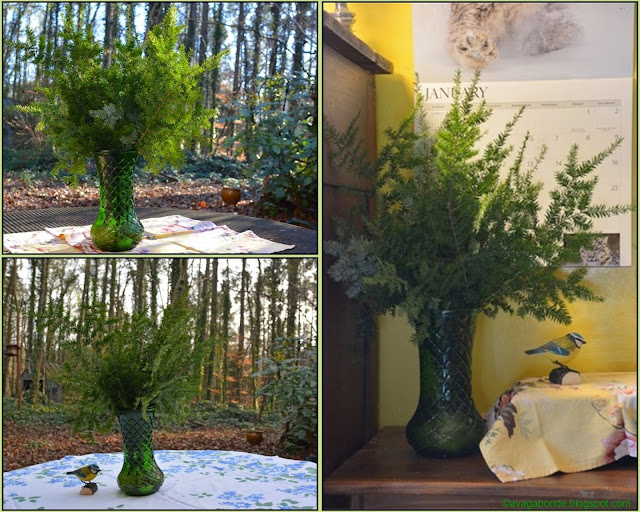 The next day, our beloved hemlock was gone - it was about 40 years old.  I took some pictures of what was left. 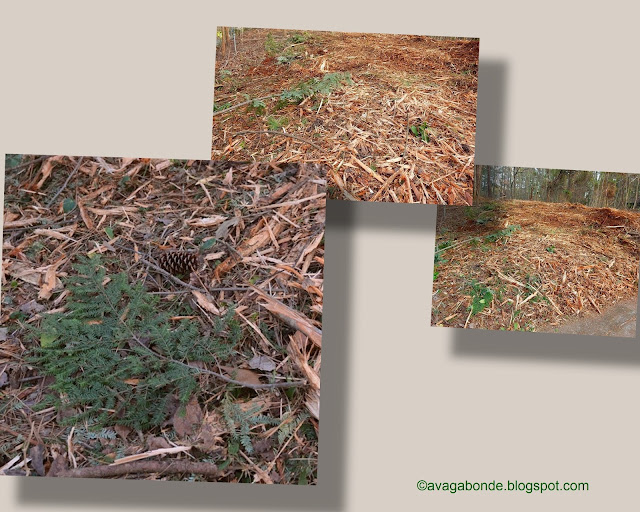 We walked toward our neighbors' home - her beautiful magnolia was gone, too.  It was so sad looking at all these trees and branches on the ground.  It looked like a tree graveyard. 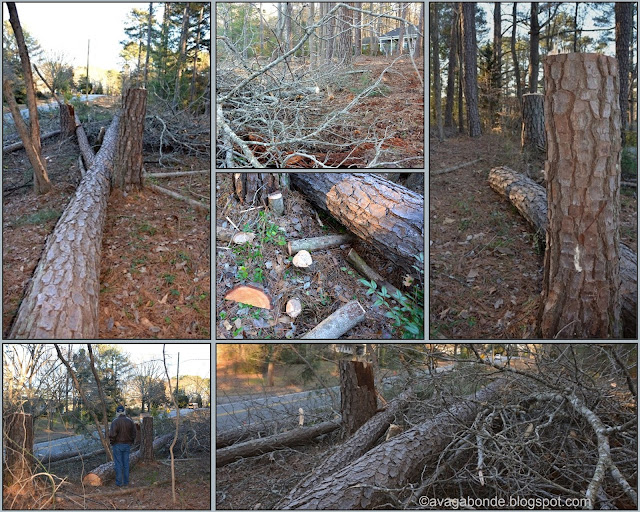 I tried to find remnants of our cedar tree, but I think it was under pine tree foliage and debris. 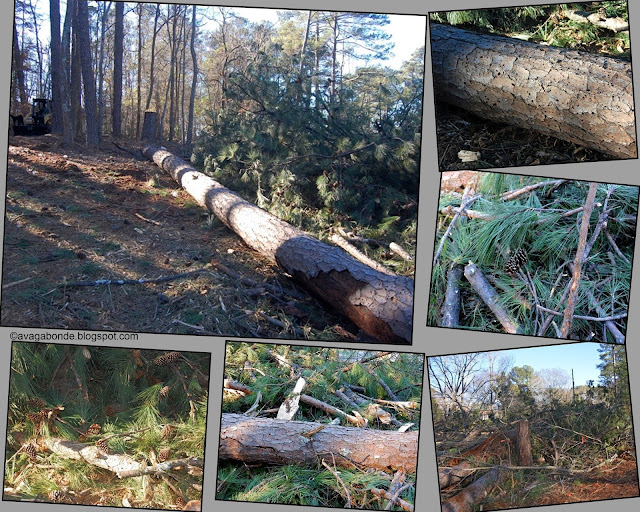 Then walking along the road, I did see the remains of our cedar, laying on a ridge. 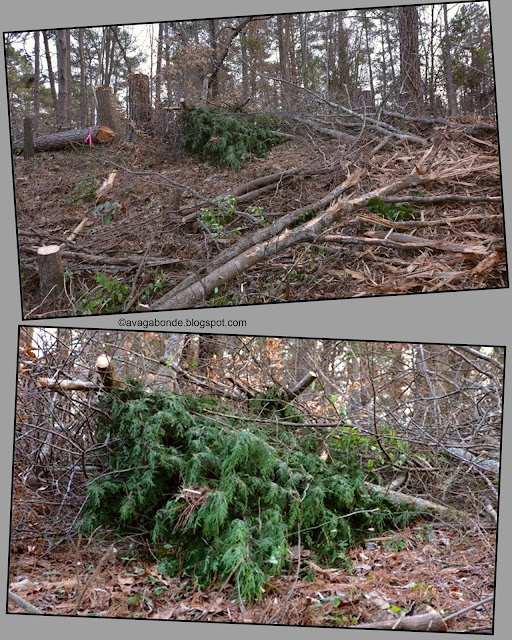 After the cutting equipment was finished, the heavy machine that mulches trunks and branches came along and pulverized everything.  We watched as the machine came across our driveway - the work was noisy, quick and efficient. 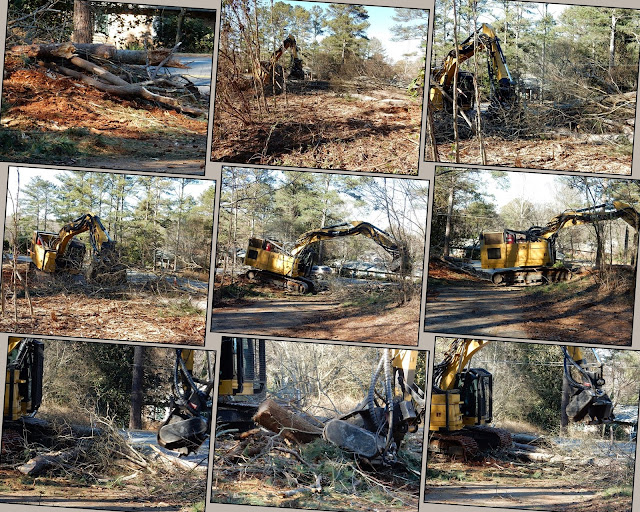 The area looks quite bare now. 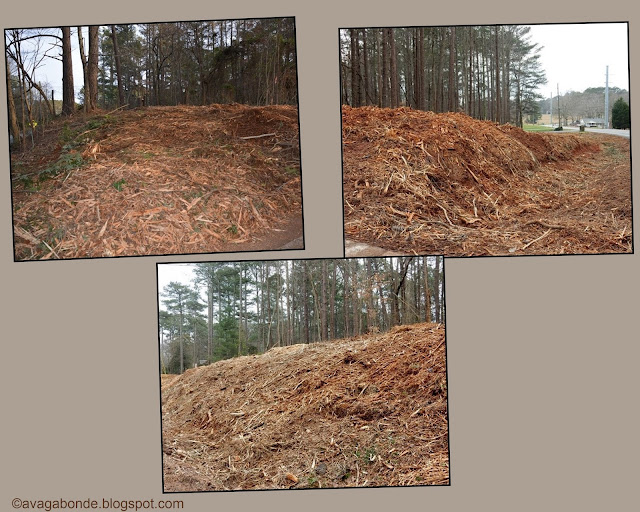 Unfortunately, they also cut our cable on Monday 18 January.  For almost a week we had no television or computer access.  We were surprised by the snow last Saturday since we had not watched the weather forecast for many days.  We did get the cable repaired just in time to watch Downton Abbey last Sunday January 24th.  (Actually I forgot to watch the show at 9:00 pm then remembered and watched the rerun that night from midnight to 1:00 am!)  Today is the first day I am back on the computer - have not looked at most blogs since mid-December... The pictures below are on the side and back of the house.  When the sun came up the snow melted rapidly. 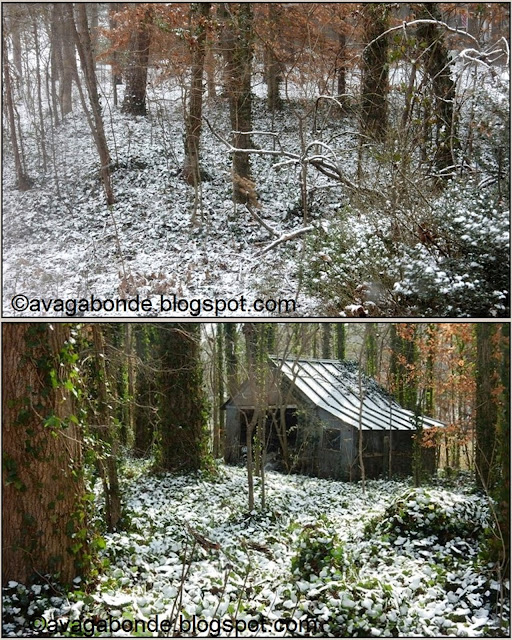 My little grey Korat, Mitsuko, was pleased when my iPad worked again as she likes to watch bird videos on youtube. 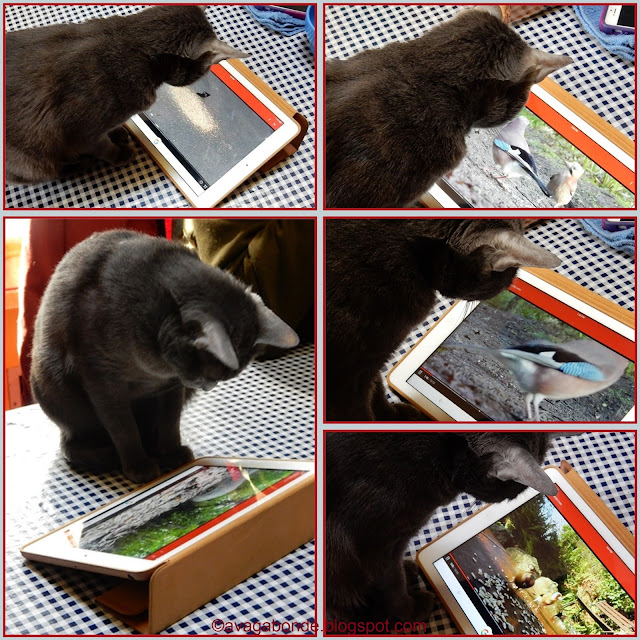 Cody, our orange cat and Mitsuko were sleeping in an old box (it is warmer.)  I placed a new box next to them so one cat could move and be more comfortable.  But they both moved into the new box and left the old one alone.  They both have nice beds but for some reason they prefer boxes or bags ... 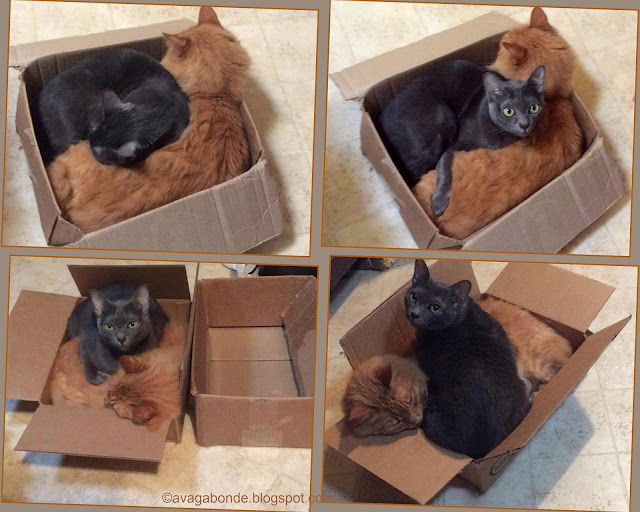 Taking pictures of cats is a special art (that I do not possess.)  There were lovely sun rays coming into the kitchen, but every time I tried to take a picture, the cats would move.  I took more than a dozen and only one is acceptable. 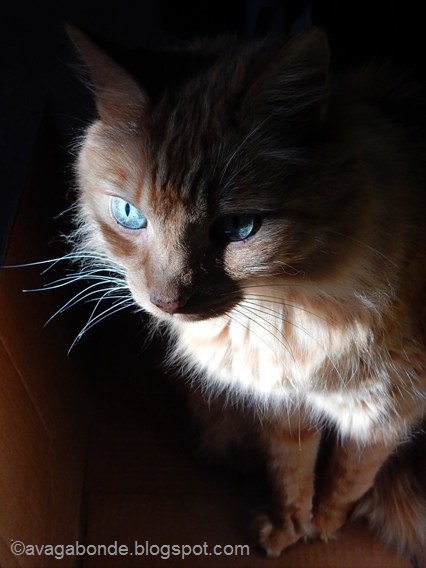 So January is almost over, and now we have to look at the year ahead - many exciting events are sure to come up ... 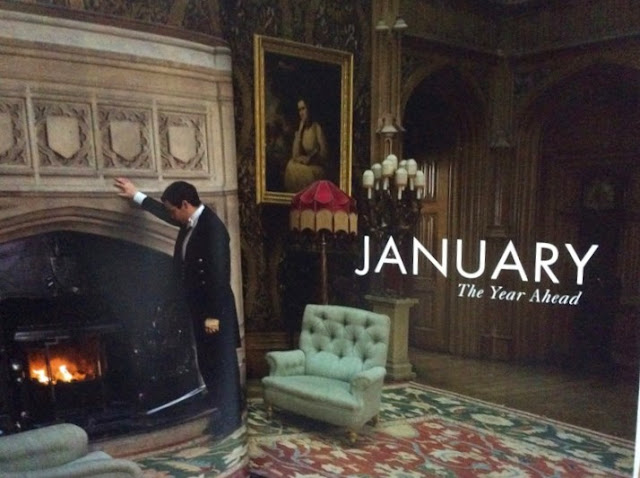