Picasso in Nashville, the weather and Paducah, KY 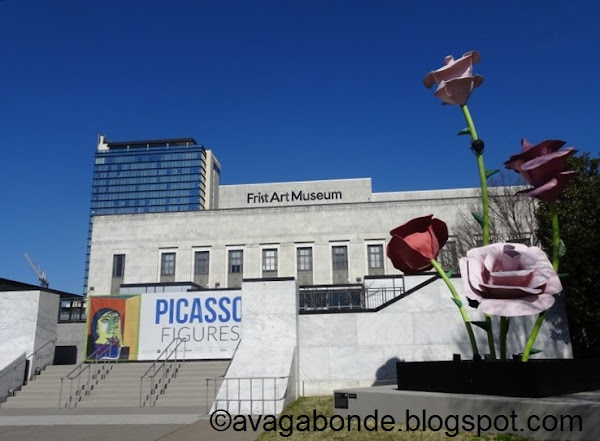 Let's start with the weather. My return trip to Nashville from Atlanta was planned for March 25, 2021, but storms started accumulating that day followed by tornadoes. One touched down in a small town west of us. I stayed up till 2:00 am on the 26th under tornado watch. On the morning of the 26th a violent tornado devastated the city of Newnan, GA, south of Atlanta, destroying several historic homes. I still left my house in Atlanta for Nashville on the 26th of March as it was my birthday and I had bought a cake at the French bakery. Because of all this I did not realize that it had rained so heavily in Nashville that part of the town had been flooded, including the basement in my Nashville house. When I looked a couple of days later, I saw water one foot high on the basement ground (as the sump pump lever had malfunctioned.) The water had entered my new water heater. It had to be replaced with a tank-less water heater (cost $3,500 - so was not very happy about that!) Below photos of the Georgia tornadoes and Nashville flood. 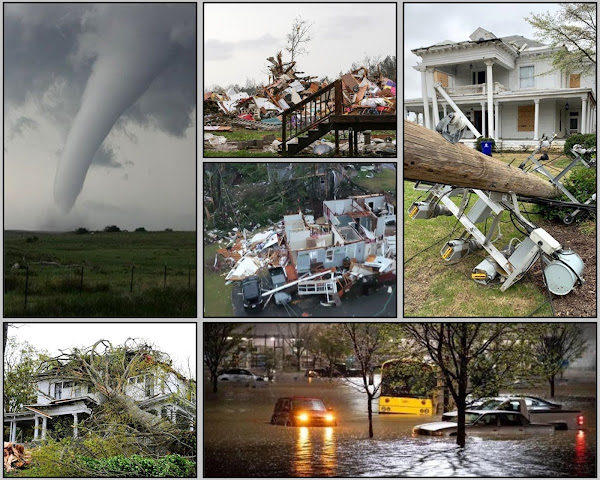 On the 27th we did celebrate my birthday at my daughter's, ending with the French chocolate birthday cake. She gave me a pretty hyacinth planter that has a lovely fragrance. 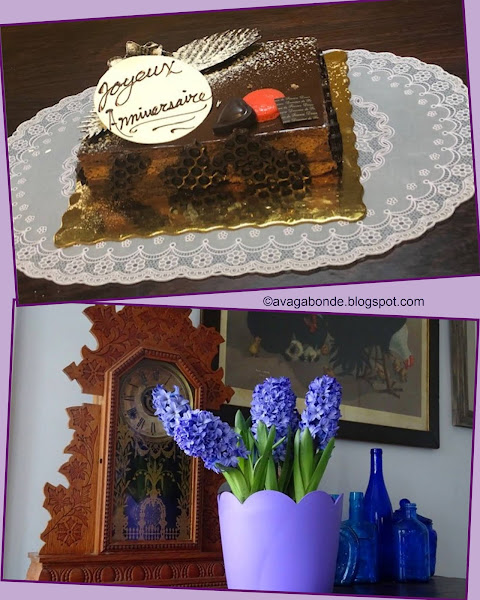 The Frist Art Museum in Nashville celebrated its 20th anniversary with a unique exhibition from France called "Picasso - Figures" on loan from the Musée national Picasso-Paris. The Nashville Picasso exhibit is the one and only appearing in the U.S. in 2021. It will end here on May 9th. Advance timed tickets are required as well as social distancing in the museum. When I attended the show few people were there. The exhibition features 75 paintings, sculptures and works on paper that are exploring the artist's lifelong fascination with the body as a means of conveying his deep feelings. Famous and lesser-known works ranging from his early years to his late period are shown with accompanying explanation. There were informative panels on the wall and a short history of Picasso's life. If you click on the photos below it will enlarge and be easier to read his biography. 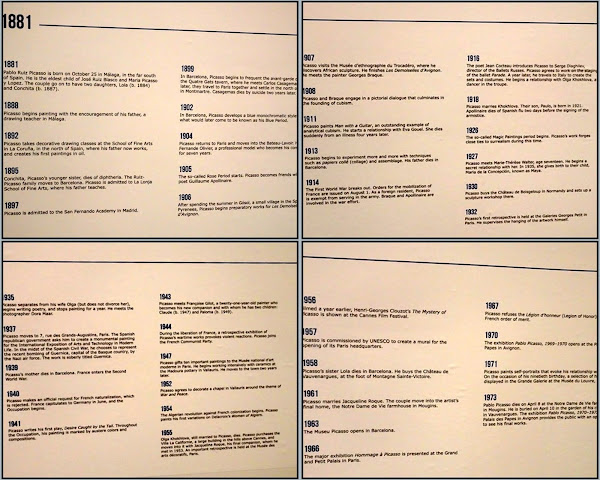 Pablo Ruiz Picasso was born in Malaga, Spain, on 25 April 1881. As early as seven years old, he was trained by his father, a professor of art at a local university. At 13 years of age Picasso took lessons with his father who was then working at the School of Fine Arts in Barcelona. Picasso studied also in Madrid and took frequent trips to Paris where he moved in 1904. In 1940 Picasso applied for French citizenship but was refused. With General Franco in power in Spain, the French government could not decide whether Picasso was a communist or anarchist, so they ruled out his request. But after he died, France honored him and his work with a museum in a historic Paris building. There were photos of Picasso in the exhibit. 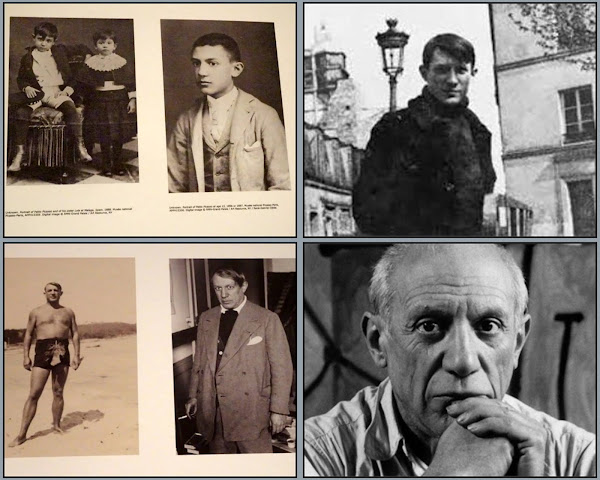 It felt strange in a way to see these famous paintings here in Nashville. I knew so many of them from having seen them in magazines, newspapers, postcards and so on, but here were the authentic paintings, the real thing. I guess it felt as someone who might have seen many renderings of the Eiffel Tower or the San Francisco Golden Gate Bridge, then see them "in the flesh" if you will. Awe inspiring. The exhibition started with a painting Pablo executed when he was not 14 years old "La Fillette aux Pieds Nus" (The Barefoot Girl.) 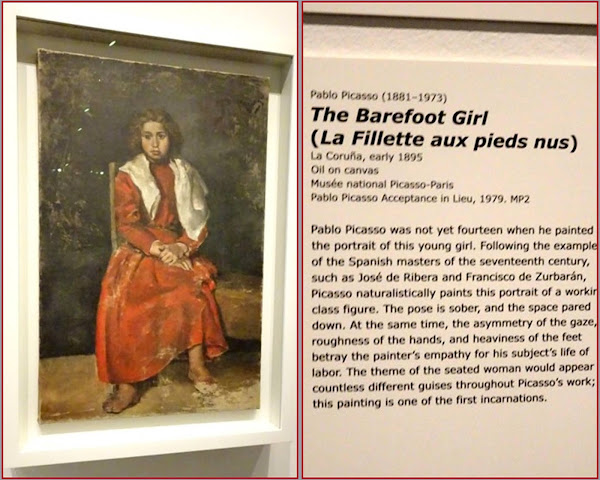 Picasso had numerous romantic relationships - he loved women and they fueled his art. Picasso was married twice, from 1918 to 1955 (although they lived separately from 1938 on) with Olga Khokhlova, a Ukraining ballet dancer of noble descent and the mother of his son, Paulo (Olga slowly drank herself to death after he left her for another woman, Marie-Therese Walker.) From 1961 to his death in 1973 he was married to Jacqueline Roque who he had met when he was 72 and she 26. Pablo had hundreds of affairs, and six significant mistresses, such as Marie-Therese Walker, who gave him a child, Maya (Marie-Therese hang herself later.) Then Francoise Gilot (between 1943 and 1953) with whom he had two children, Claude and Paloma. Francoise is the only woman who left him, and Picasso resented this tremendously. He disinherited their two children. Francoise subsequently married the American physician and researcher, Jonas Salk, who created the first vaccine against polio. Jacqueline Roque, his second wife, was the most featured woman across his artwork - he painted 400 portraits of her. (Jacqueline could not live without Picasso and in 1986 she committed suicide.) I took a side view of many of the paintings to avoid the glare from the lights above. 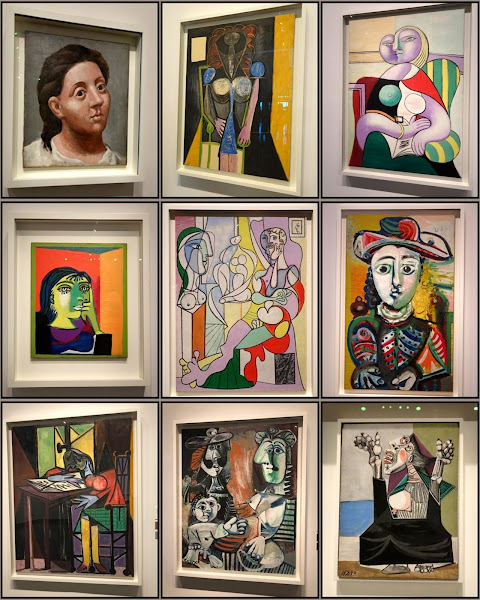 On June 3, 1964, Picasso painted Jacqueline Roque, his future second wife, and titled it "Jacqueline aux mains croisées" (Jacqueline with crossed hands.) She looks like a 20th century long-necked sphinx with the vacant gaze of a Mona Lisa. It is quite a famous work of art. I was surprised to see it in Nashville. 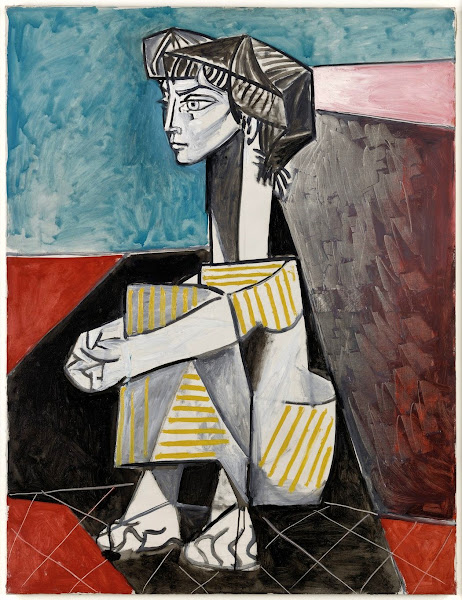 I took several views of it. 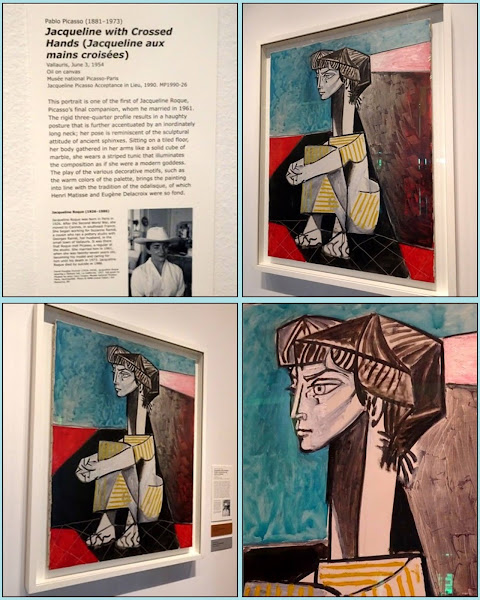 There was a short video showing Picasso painting a flower. Below is the sculpture "La femme à la poussette" (Woman with a baby carriage.) In 1950, while walking around in Vallauris (southeast France) Picasso would pick up random thrown away pieces and gather them for his work. For the bronze sculpture below Picasso combined pieces from a real baby buggy with the base of a frying pan and a handful of tart molds, then completed the sculpture with plaster such as the woman's head and arms. 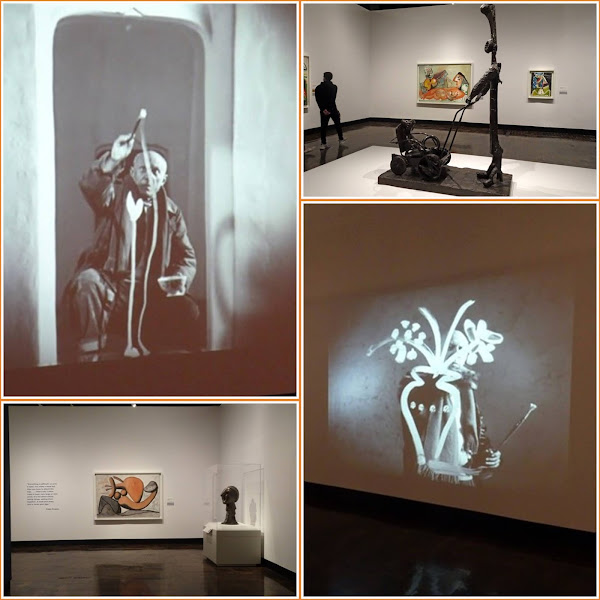 Interspersed on the walls were some of Picasso's quotations. 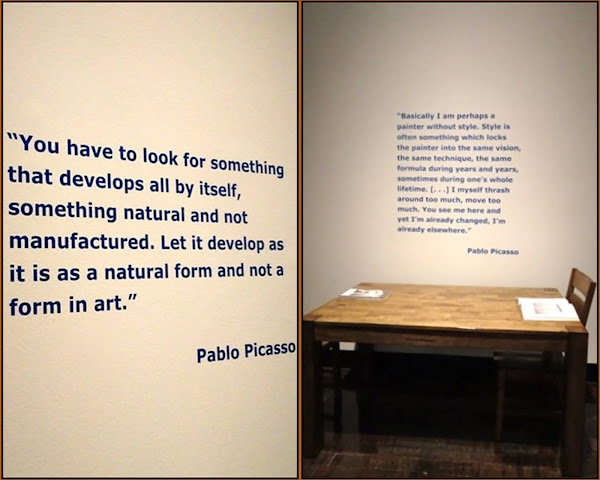 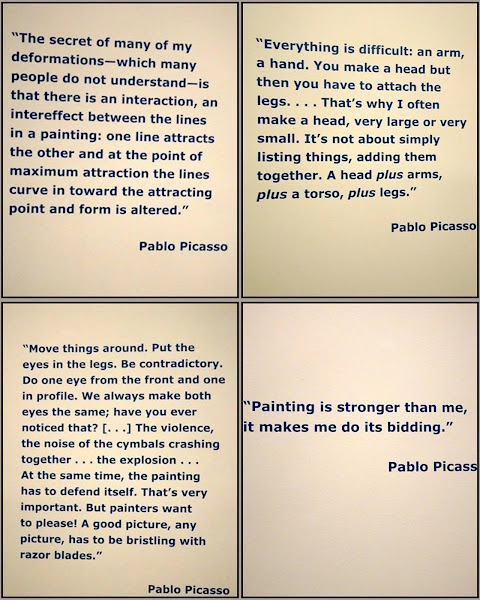 There were also descriptions of Picasso's creative phases, labeled "periods." The "Blue Period" started in 1901 until 1904. The "Rose Period" lasted until 1906. Then from 1906 to 1909 Picasso was inspired by African art knwon as the "African Period" to be followed by his "Cubism Period" that was at first influenced by Cezanne. Picasso is known for breaking down basic forms then reconstructing them in an abstract way. Picasso took inspiration from everything in his life, his emotions, events, women, and work from his fellow artists. And in turn he has inspired millions of people. 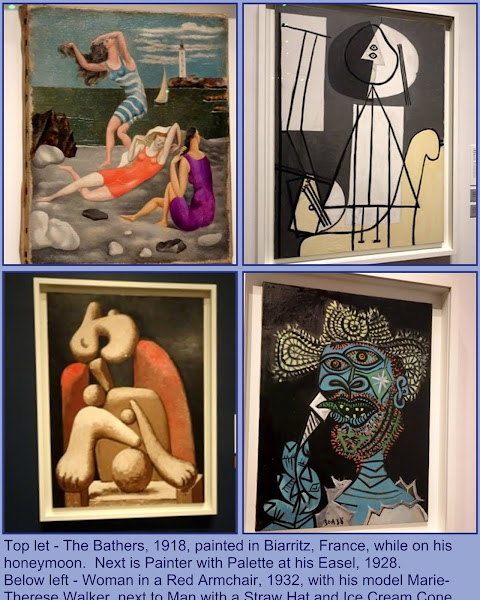 From his academic years in Barcelona until his death, Picasso was inspired by paintings from Masters of the past. He redid them in his revolutionary style. He produced series from Delacroix, Velasquez, Manet, and more. Picasso was very stimulated by Edouard Manet's (French, 1832-1883)"Le déjeuner sur l'herbe" (Luncheon on the Grass.) Picasso recreated this painting his own way in 40 works of various disciplines such as paintings, printing, drawings and ceramics. Below is Manet's original 1863 oil painting (at the Musee d'Orsay in Paris) and Picasso's 1960 interpretation. 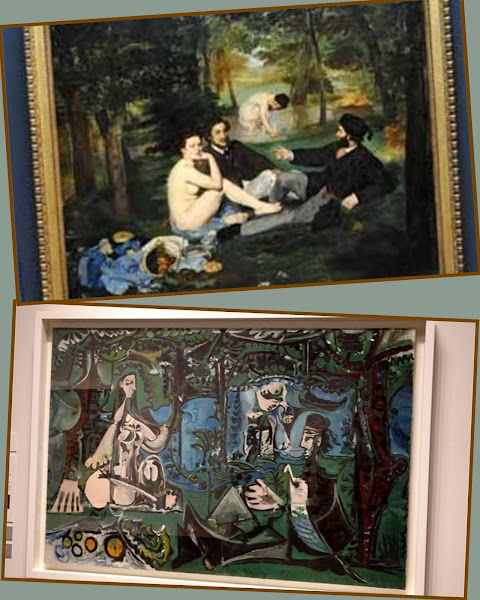 Below is one of the last paintings of Picasso one year from his death. The Musician was painted in 1972 in his house in Mougins, in the south of France. 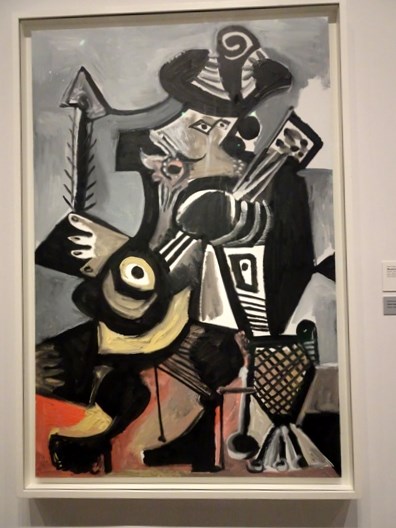 Picasso is a pillar of modern art and one of the most influential artists of his generation. He is one of the most prolific in history with close to 50,000 known works. To be able to see some of his works in Nashville was a real treat. It was like a little piece of Paris. My mother lived for many years in the Marais district of Paris where the Musée national Picasso is now located. But in those years (the 1970s) the museum was just another dark historic building that was less than half a mile (750 meters) from her flat. The Hôtel Salé ( “salé” meaning “salty” in French) where is the Picasso museum now, was built in 1659 for Pierre Aubert de Fontenay, a collector of the salt tax. Along the years it saw many owners, including the Embassy of the Republic of Venice (before 1728) then more prestigious owners, a school, etc. Below an old photo of the building (pretty much as I used to see it) and now as a museum for over 5,000 works of Picasso and tens of thousands of archived pieces. (The museum is temporarily closed due to the Covid virus.) 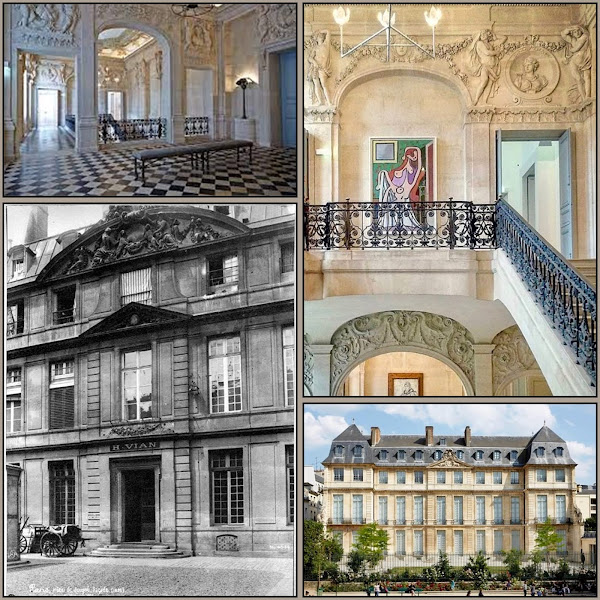 After my father died my mother sold the big house and moved to the Marais district of Paris. Then, it was not touristy or even prestigious - it was just another old quartier of Paris, which is why she was able to purchase two flats there (to connect into one larger flat.) Although when she moved years later, the area was starting to be gentrified. Now of course Paris has changed a lot. The last time I visited the area wishing to go the the neighborhood restaurant we used to visit, it is now a Starbucks coffee shop, really. Of course I love my home town of Paris but at the same time when I go back I'm always afraid to be unable to find the places I knew. About two million people live in Paris now - 50 million tourists went there in 2019. Actually it is not easy to have your home town be Paris, who everyone else loves, too. I was thinking it might be nice to be from a small town, where things do not change much and local people are there, not herds of tourists. So I placed my finger on the U.S. map to see where I could be from,and what it would be like to be from there. My finger landed on Paducah, Kentucky. 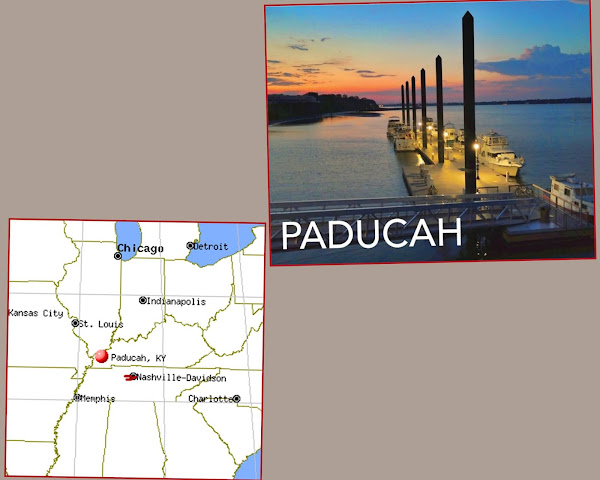 Paducah? I had not heard of it, but it looks close to Nashville. Then it starts with the letters Pa - like Paris; Pa - Paducah. It is also a river town, since it is located at the confluence of the Ohio and Tennessee rivers. I found out that it is one of the world's UNESCO Creative Cities. This year is the 30th anniversary of the National Quilt Museum that was established in Paducah in 1991 (a must see for me.) There is also a famous African American museum located in the former 1908 Hotel Metropolitan where guests included Louis Armstrong, Duke Ellington, Tina Turner and more. I read that restaurants are also abundant there, with Tasting Table naming Paducah among the best small town for food in the U.S. River boat cruises stop in the Paducah port. (Photos courtesy the Paducah Tourist Bureau.) 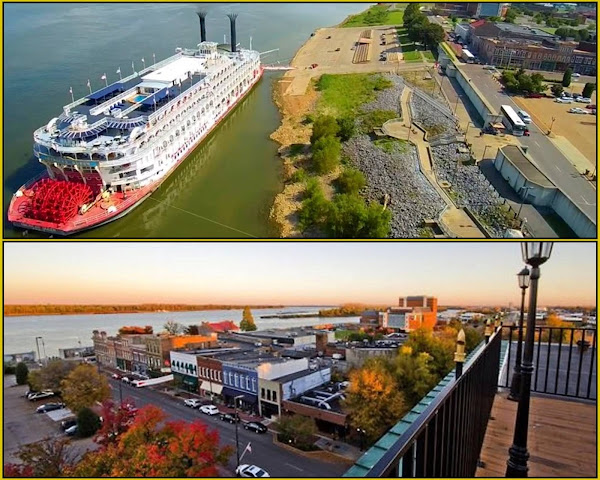 On the Paducah travel site I also read: "Historic Downtown Paducah, Kentucky, has been consistently recognized as one of America's best and most beautiful Main Streets by Architectural Digest, the National Trust for Historic Preservation and many others. Preserved 19th century architecture frames contemporary cultural experiences. A certified Kentucky Cultural District with twenty square blocks listed on the National Register of Historic Places, Historic Downtown is incredibly walkable with creativity at every turn." Well, I might not be able to fly back to Paris because of the virus, but there is a good chance I can manage the two or three hour drive north from Nashville to Paducah, Kentucky, this summer. I'm pleased my finger fell on Paducah on the U.S. map - must be a nice home town, too. 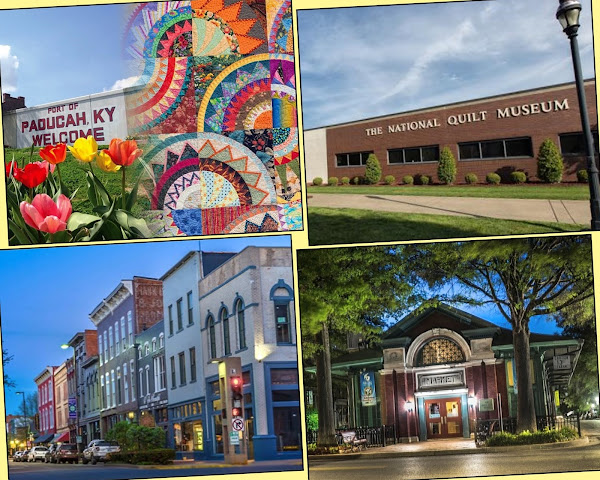