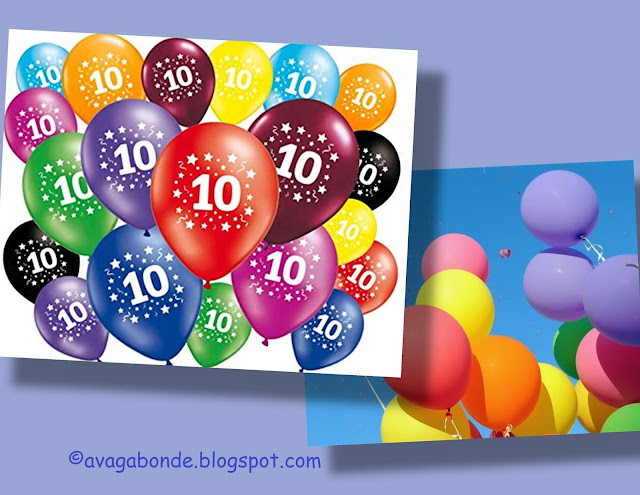 Ten years! A very long time when you are a child, but as a senior with a different perception of time, it seems the years went by quickly.  I have enjoyed writing for this blog and visiting my friends' blogs as well.  It has provided me with many hours of fun, creativity and gave me support during my late husband's long illness.  I am back in Georgia right now where spring is exploding with more color than in Tennessee, maybe because azaleas and dogwood trees thrive better here.  Some of the pictures below have already been shown in earlier posts.  The pink azalea bush on the top left of collage was taken yesterday in my backyard.  Click on collage to see better. 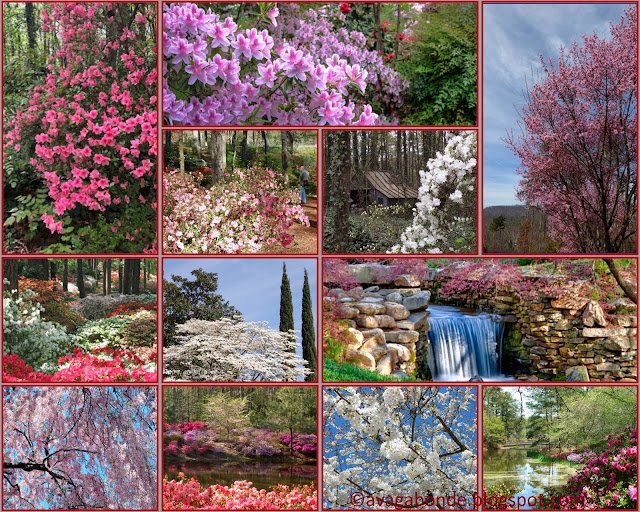 Now, let me explain how I started and kept this blog.  I owe the beginning of my blog to three persons, actually.  Ten years or so ago my husband's cousin Lyle who is a physician retired now from the Centers for Disease Control and Prevention (CDC) in Atlanta wrote some of his memoirs for the family.  He constantly urged me to write my remembrance of growing up in Paris so that my grandchildren would know about it.  I did not think my memoirs would be that interesting, certainly not like his memoirs.  When I talked to him on my last visit to Atlanta he gave me so much information on his career in the medical detection field that it would take a full post to explain it.  I'll have a post on him later as he is writing a biographical book and promised to give me an early copy.  He started his career as part of the first Peace Corps medical staff sent to Nigeria in the late 1960s.  He cared for patients during the Nigerian-Biafran civil war, from both sides of the conflict.  He became the staff physician for the Peace Corps in Africa at that time.  Then he pursued a long career as a public health hero at the CDC.  He traveled widely and constantly investigating disease outbreaks and finding ways to stop them, such as the Ebola virus.  He was deployed in many parts of the world and in the US as well.  Through a lifelong dedication to public health, Jim's cousin Lyle is certainly one of the main godfathers of epidemiology.  Below are some photos from Lyle's files. 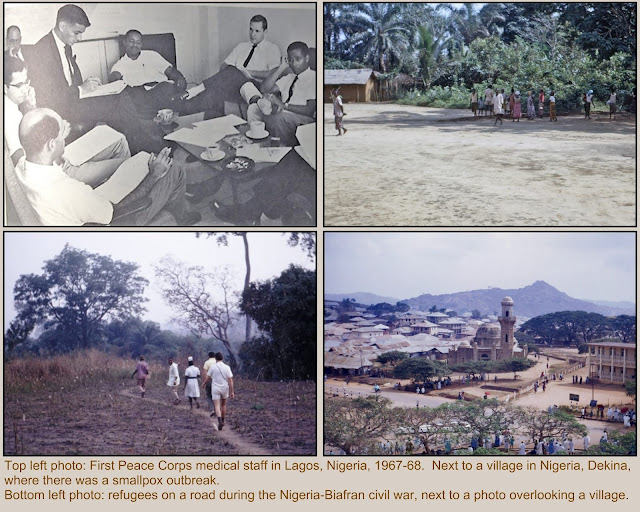 As we were talking about writing my Paris remembrances then, I happened to read an article on the New York Times about Ronni Bennett, the owner of the popular blog on aging, Time Goes By
(Timegoesby.net, ) who was saying: "The Internet provides people with a new way to tell their story.  When the grandkids aren't interested in listening anymore, older people can still share their stories and get feedback.  The technology makes it simple."  I went to her blog and saw that one could send a story to her and be published.  I thought I could send her some of my recollections and did send her one about a first kiss which was published.  Later I included this story in my first anniversary post "First anniversary and recollection of a first kiss."  Concurrently my husband and I went to celebrate my birthday in Long Beach, California, where our daughter was living at the time.  I told her about writing some articles for Times Goes By.  She replied that only a few of my stories may be published and it would be better to start my own blog.  Of course I had no idea how to do that, but she did.  She helped me set up the blog after we found a title for it.  So I owe my blog to Ronni Bennett, the second person and to my eldest daughter, the third person.  I spent some time looking at photos I have taken during these last 10 years to include in this post.  (Click on collage twice to enlarge photos.) 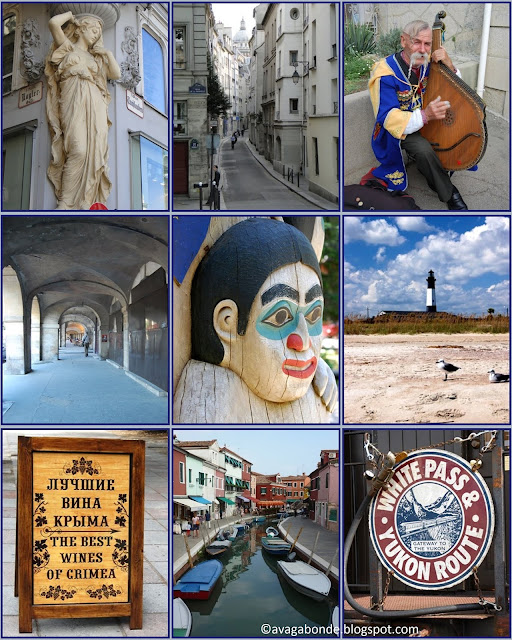 I thought my blog would include more stories from my past in France, but then we found out that my husband Jim had been diagnosed with Alzheimer's disease.  This changed my blog.  I read everything I could find on Alzheimer's as I knew very little.  I found out that each person's disease is unique but that stimulation to the brain (reading, talking, socializing, traveling, etc.) as well as a healthy diet could slow down the disease.  I also realized that as my husband was losing his short-term memory he could, for a long time, remember events if he saw pictures of them.  I started to take many photos of the same subject, with different cameras, and then showing them to him, and asking him to decide which picture to publish.  It slowed down the posts, but I do believe that it helped him.  He patiently waited during our travels while I took picture after picture of buildings, flowers, animals, food and more so he could better recall them later (I did not tell him why I took so many.)  It would take a while for him to check them as he would have to study up to 300 pictures per post!  For stimulation I also asked him to read every paragraph I wrote, telling him to correct my English. 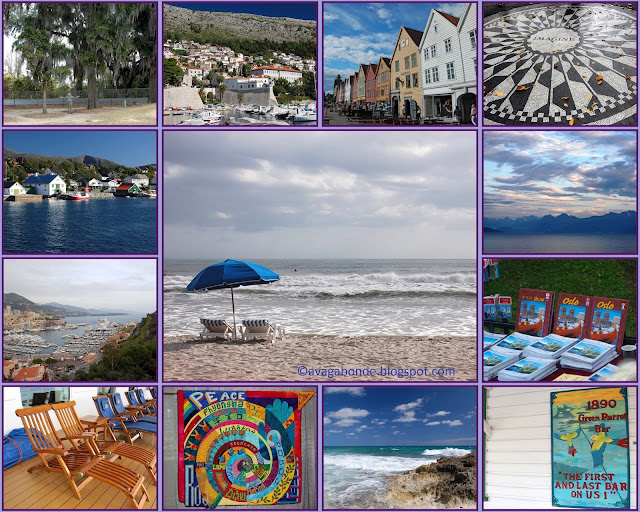 I remember as we would visit historic buildings, castles in Europe or mansions such as Bulloch Hall here in Roswell that has yearly Christmas and spring quilt shows, I took a great number of photos with both my Nikon and another little camera, my Sony or Cannon.  Then it was Jim's turn to decide which ones I should use.  I know it was a good tool for his brain stimulation.  Now of course, I need to go back and delete all these duplicate photos taking my computer memory. 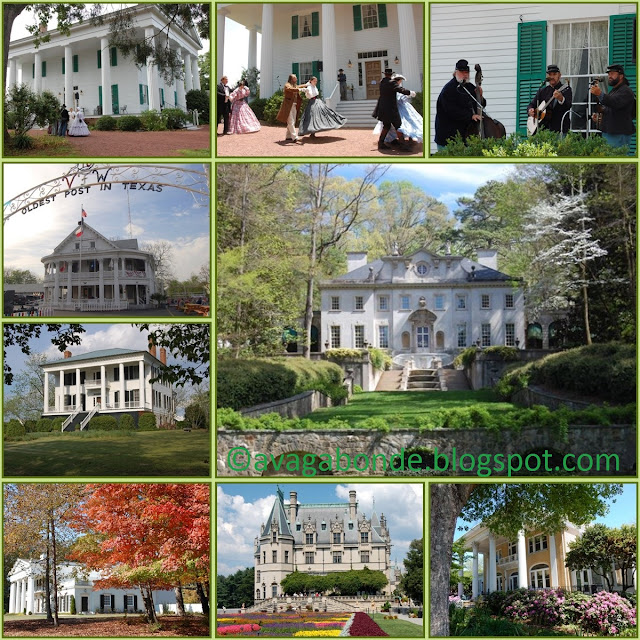 I would spend hours figuring where we could go, far away or close by, so he would have many visual opportunities, and we would write posts on them.  I studied all the offers on the Internet for budget travels such as 2 for 1 price cruises - as those we took to Hawaii and Alaska.  I would also find out if there were any special events or festival close by, as you can see by the 3 top pictures in the collage above - a re-enactment week-end.  I have not had time to write posts on many of these trips and have enough pictures and material to write posts for the next 3 or 4 years, even if I don't step away from home!  Of course we took many photos of animals and visited several zoos to see them, in Atlanta, Columbus, OH, Houston, TX, Brooklyn NY, Paris, France, Memphis, TN, in Hawaii, West Palm Beach, FL, Tampa, FL, the kangaroo Center in North GA, and many other places (in addition to hundreds of cat and tree pictures.)  Or we saw them in the wild, such as the baby alligator in Florida, the lambs in a field in the Louisbourg National Historic Site, Cape Breton Island, Nova Scotia, Canada, the reindeer in Norway Arctic Circle, and the bear below while in the Yukon Territory of Canada. 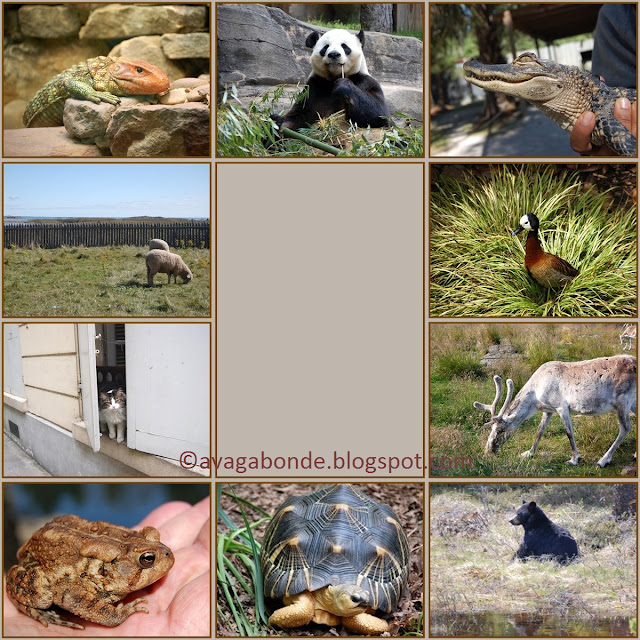 Birds were another favorite.  Toward the end of his illness my husband could not read anymore but he could look at bird books all afternoon as well as each cat in his one-cat-a-day calendar.  It was difficult now to choose which bird photos to include here. 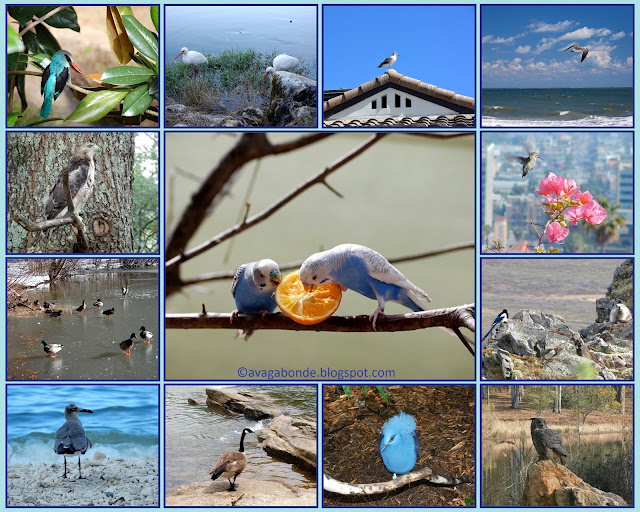 Flowers of course with such an array of colors and shapes were always included in our series of photos and required critical inspection.  My home-made therapy for my husband's disease was quite time consuming.  The trips research, the photos, the posts and decision on photos did not leave much time to take care of the house.  I thought I would do it later - and am doing it now. 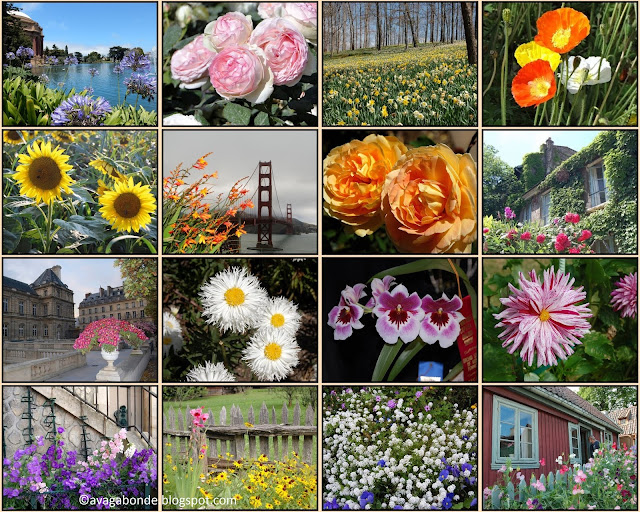 As my husband's illness progressed it was difficult for him to remember the beginning of sentences and we would have to read my post paragraphs 6, 7 or more times.  Then when he could not longer read it was the constant reappraisal of the photos.  I did try to be patient but at times it was not easy.  I knew that my blog was our therapy, so we kept at it - for almost ten years!  Even as late as early last year I would ask his opinion on my photos. 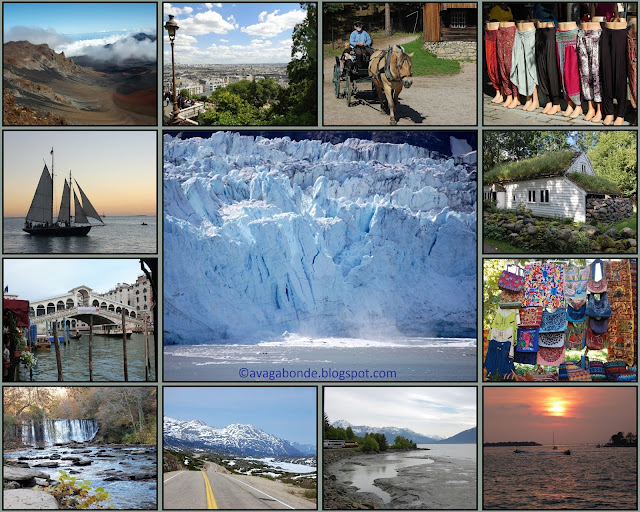 Even when we went to eat with family or friends or even to restaurants I took photos and included them in posts so he could remember the meals.  I don't think he realized that I used my blog to help his memory - he believed he was helping me write and select photos. 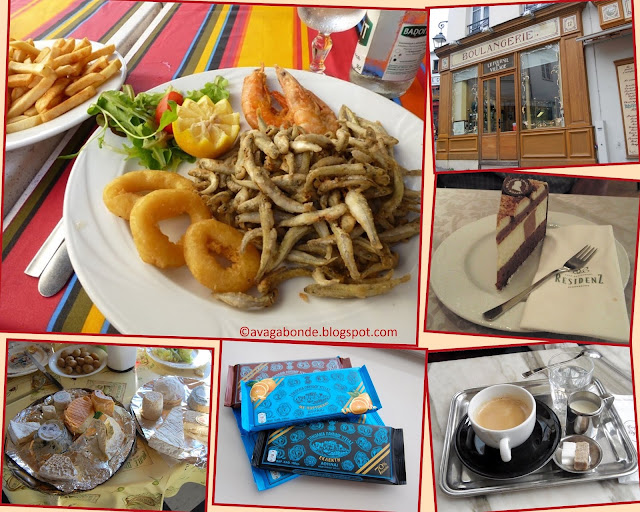 I am so used to taking many photos for my posts that I don't think I'll change now.  Looking at my photos and selecting some for this post has been a walk through his illness in a way.  It has been bittersweet.  I started my blog ten years ago on my birthday.  Now when my birthday comes around I'll always be reminded of the beginning and evolution of my blog, and what it has meant to my husband and me.  It has helped him, has been fulfilling for me and brought me new friends.  I am very grateful for their taking time to visit my posts and commenting.  I brought my cat Mitsouko with me to Georgia this time so she would not be lonely in Nashville now that her companion Cody is gone.  She had not been here in over one year but quickly jumped into their place by the window, looking out at nature and the sun.  I took a picture of her - my latest picture at the bottom of this collage (to be truthful, I took about 8... can't stop myself...) 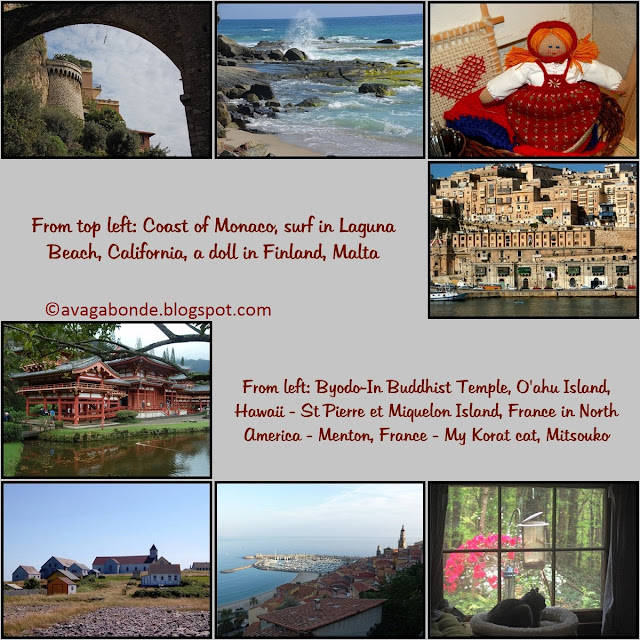 Mitsouko, my little cat, is right.  Looking forward to the sun and keeping darkness behind is the way to go forward.  (Below photo of the beach at Dana Point, California, taken during our last trip in 2016 to our eldest daughter's wedding.) 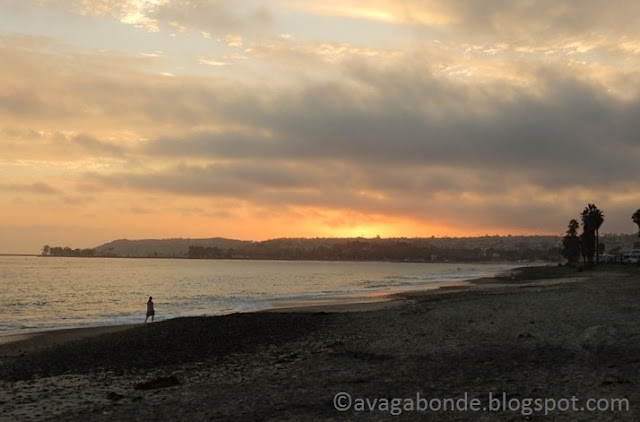