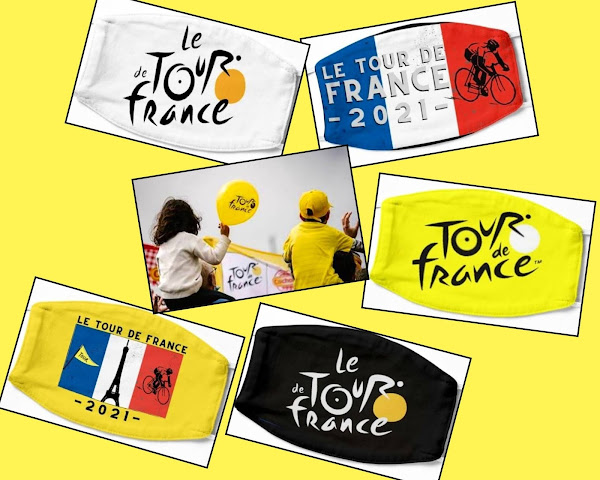 The days flew by since my last blog post. I traveled back to Georgia twice in June as I knew I would not go in July. In July I stayed with my eldest grandson while the other three grandchildren attended a summer day camp in another state. Then I traveled to that day camp when my daughter had to come back. I just returned a few days ago. For the first time in years I was unable to watch the Tour de France very much. There was no television access where I was staying. I went back to the official Tour web site and watched highlights. Most of the photos here are courtesy the official Tour de France site. Below is the Tour route for 2021. 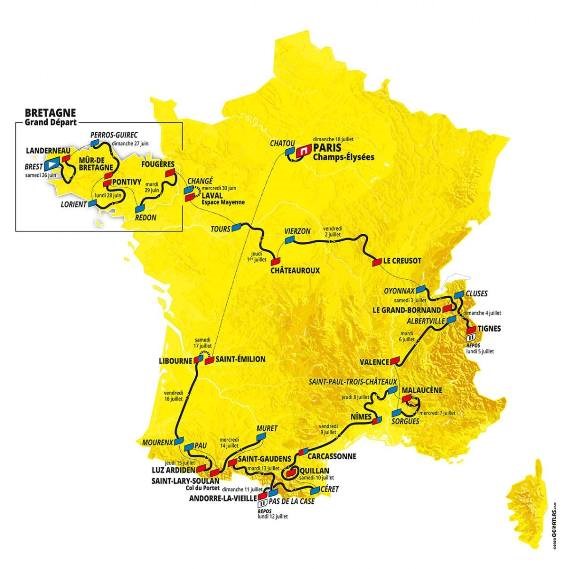 The route of the Tour de France is planned several years in advance. The start of the 2021 Tour (known as the Grand Depart) was to take place in Copenhagen, Denmark's capital. But, because of the COVID-19 pandemic it was tranferred to the port city of Brest, Brittany, France. Brest has been a military harbor since 1631. The 108th Tour started there on June 26, 2021 and concluded in Paris on July 18, 2021. The Tour covered 3,414.4 km or 2,122 miles during the 21 days of bicycling. At the start of Stage 1 in Brest there were 23 teams with eight riders in each team for a total of 184 international cyclists. There were 8 flat stages, 5 hilly stages, 6 mountain stages (with three summit finishes) and 2 individual time-trials (plus two days of rest.) As usual the cyclists rode through warm and cold weather, fog and rain. (Click on collage to enlarge.) 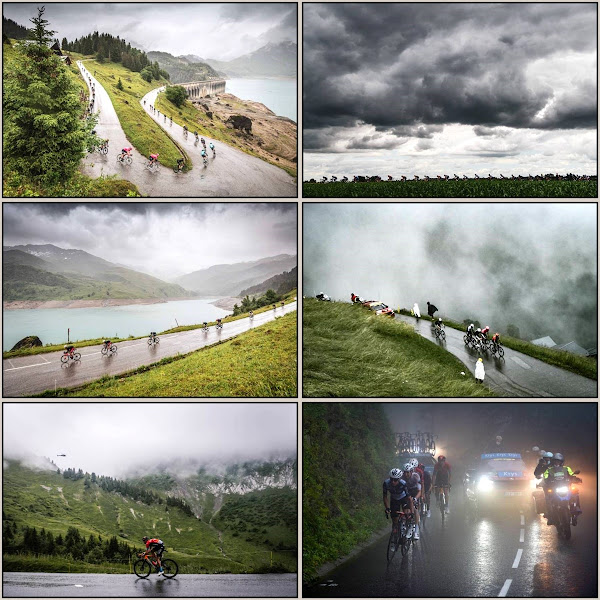 Each year I believe I have written a blog post on the Tour de France, giving its history, explaining the stages, the jerseys and so on. For more information please go to Tour de France on the right of my blog under Categories. As I explained in my blog post "Summer of 2017 and the Tour de France", a caravan of decorated vehicles rolls ahead of the Tour. It was founded in 1930 as a warm-up act for the arrival of the cyclists. These promotional vans come blaring down the roads with horns and music. Young people in them wave to the crowd and throw key chains, hats and other promotional gifts from the gaudy floats. Fans, who have been waiting for hours to see the Tour, look forward to catching a free souvenir from them. This year there were 150 promotional vehicles throwing 12 million recyclable gifts to the crowd. 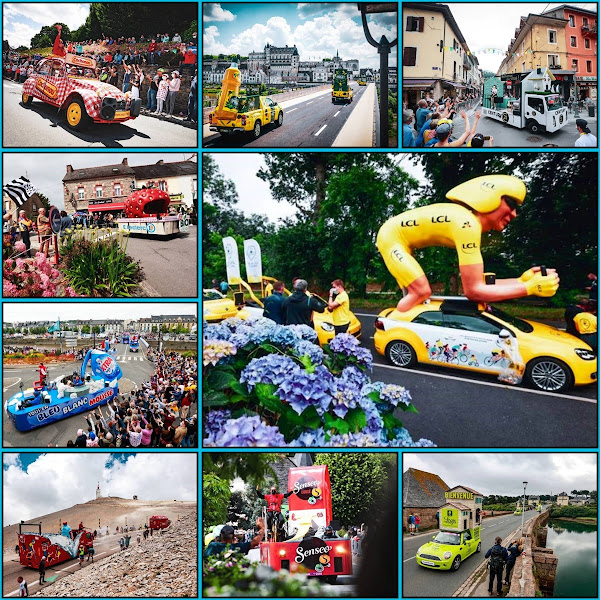 Below are some publicity vehicles from prior years. 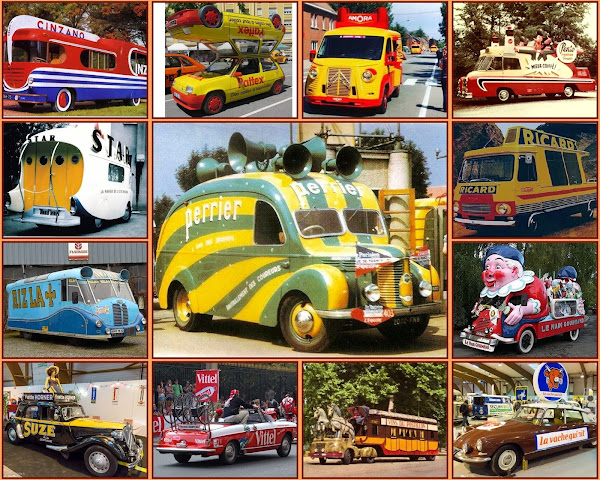 One of my favorite sprinters, Peter Sagan from Slovakia, had to abandon the Tour due to a knee injury. But another favorite sprinter, Mark Cavendish from the UK, won four stages. Now with 34 Tour de France stage wins, he has equaled the legendary Belgian Eddy Merckx, former professional bicycle racer (born in 1945.) Cavendish is one of the greatest field sprinters of all time. 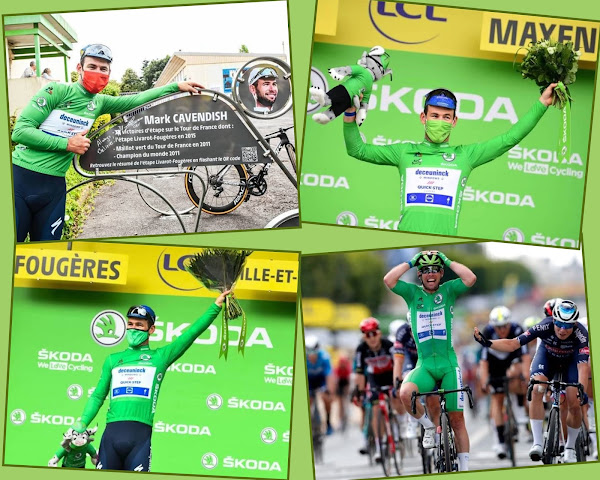 In Europe alone 150 million watched le Tour de France 2021 on television. Along the route, spectators were asked to wear a face mask, and most of them did. It is estimated that the number of spectators along the route was between 10 and 12 million. 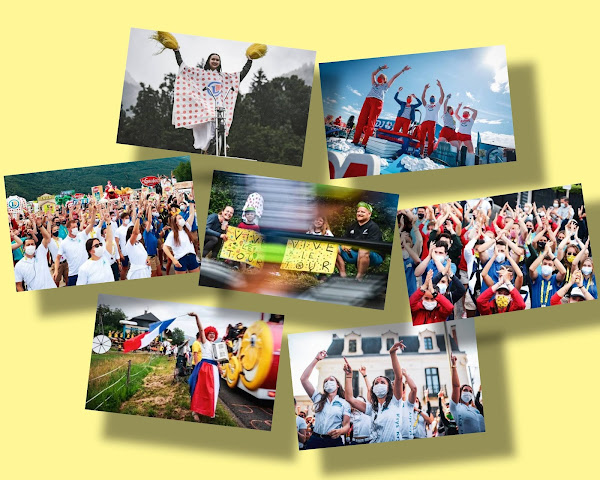 With so many fans along the narrow roads, some of them can cause accidents. This year a spectator holding a hand-written sign for her German grandparents, caused a massive crash during the first stage of the Tour. She stood with her back turned towards TV cameras, and blocked part of the road. Tony Martin, the German rider, hit the cardboard sign then a bridge. This caused a huge pile-up behind him with 80% of the peloton crashing on the pavement. A total of 21 riders were injured, some with broken bones and head injuries. Three riders were forced to abandon the race at this early stage, a German, a French and a Lithuanian. The Tour de France is such a tough endurance event where injuries are frequent that an accident caused by a spectator is a terrible shame (and infuriating!) 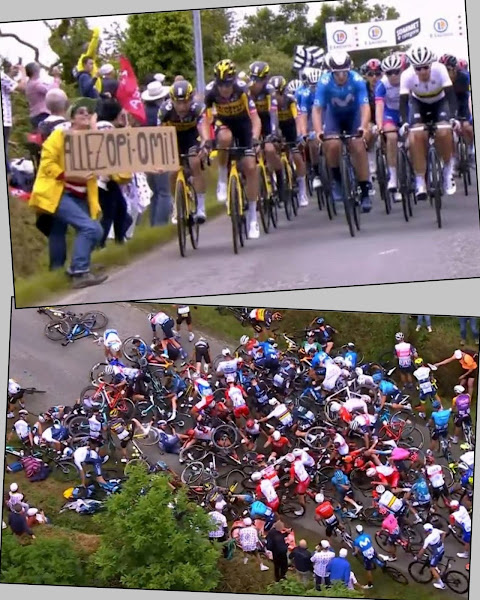 The helicopters above the Tour always offer great views of the surrounding landscape. Below are photos of some of the French towns the Tour visited. From top left to right: la Maison Carrée, an ancient Roman temple in Nimes that inspired the church of the Madeleine in Paris, and Thomas Jefferson's design of the Virginia State Capitol. Then the Nimes Roman arena, Saint Lary Soulan, Sorgues, Carcassonne, Brest, Malaucene, St Emilion, Libourne, St Paul Trois Chateaux with its lavender fields and St. Gaudens. 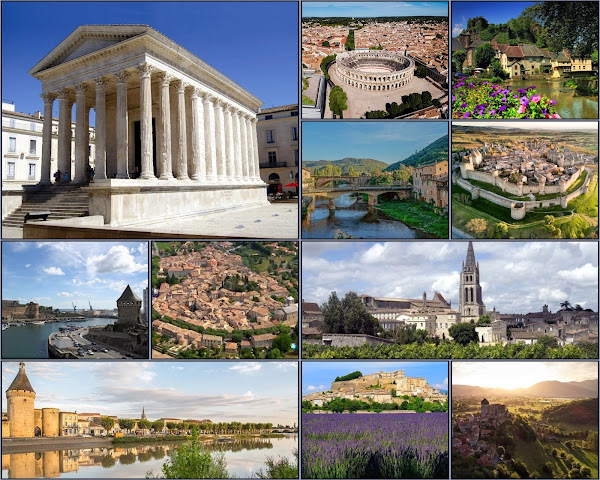 This year Stage 15 of the Tour finished in Andorra La Vella, the capital of the Andorra principality. Andorra is a landlocked sovereign microstate, the sixth-smallest in Europe. It is bordered by Spain and France. It is believed to have been created around the year 780 by Charlemagne (768-814.) The population of Andorra is 77,000 and about 10 million tourists visit it each year, mostly during winter sport and also for its countless duty free shops and boutiques and for its ancient monuments. Andorra has the highest life expectancy in the world at 83 years for males and 85 for females (life expectancy is 77.3 years in the USA.) 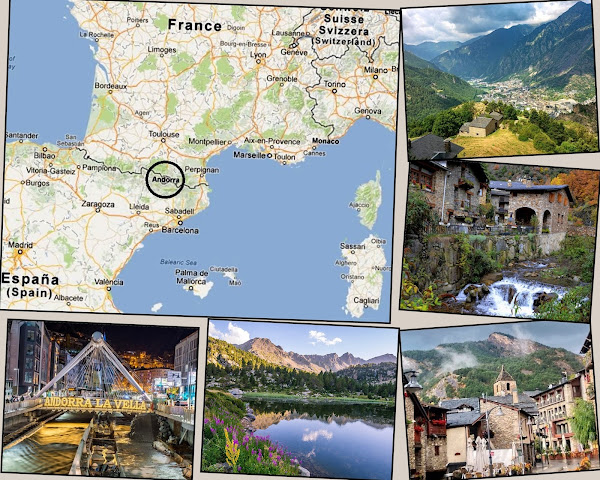 After going up hills and down dales... 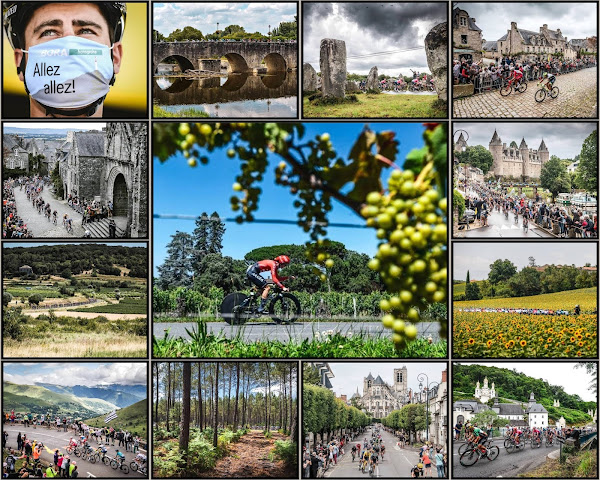 ... the most popular and prestigious event on the international stage race ended in Paris. The winnmers of the 2021 Tour de France were: Tadej Pogacar of Slovenia, who won last year as well. The second winner was Jonas Vingegaard of Denmark and third Richard Carapaz of Ecuador. The sprinter green jersey went to Mark Cavendish of the UK, the mountain polka-dot jersey went to Tadej Pogacar as well as the white young rider jersey. The combativity jersey went to Frank Bonnamour of France; the winning team was Team Bahrain Victorious. 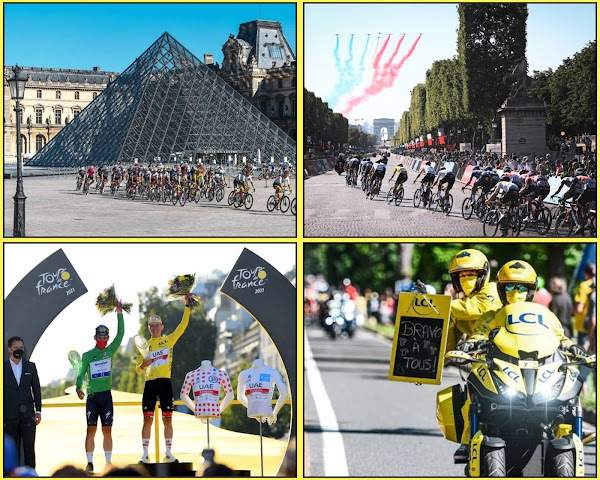 On the 14th of July, French National Holiday (Bastille Day) I was still away. Later I watched the traditional two-hour Paris parade on the French ministère des Armées (Ministry of the Armed Forces) video. This year the parade theme was "Winning the Future" which, according to General Christophe Abad, Military Governor of Paris - referred to the nation's collective ability to overcome the difficulties associated with the health crisis. For the armies, it referred to the fact that they are geared towards tougher engagements by relying on high-tech equipment. The center photo shows the men from "Operation Barkhane" an anti-insurgent mission led by the French military against the Africa's Sahel region's Islamists. This French force mission started in August 2014 in N'Djamena, the capital of Chad, with 5000 men. It will end in 2022. 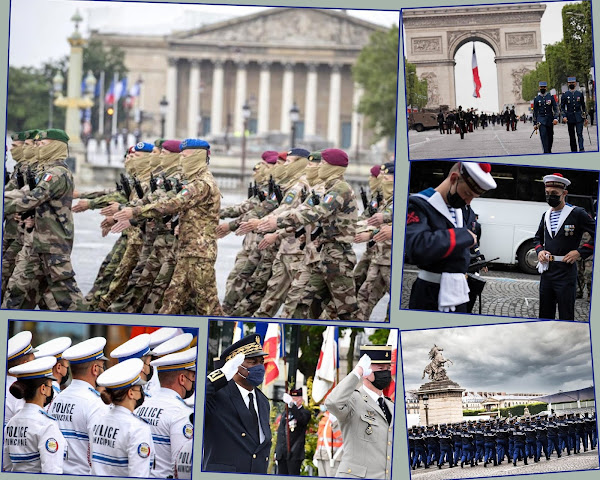 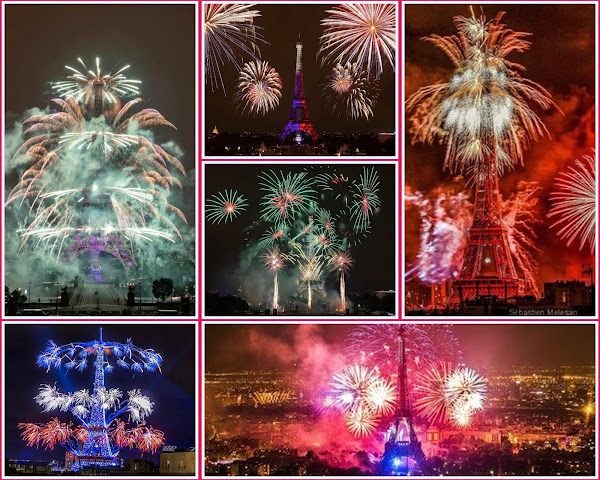 P.S. I bought some of the face masks shown in the heading collage at the Red Bubble Market Place, https://www.redbubble.com/ Also, I'll try to finish part 2 of my mother's during WW2 post at a later time.
at 7:48 PM 10 comments: