My immigrant Story in The Guardian (and a Celebration) 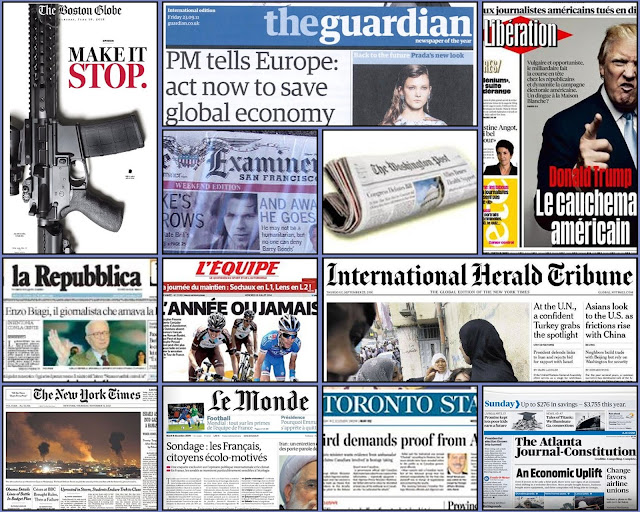 As time permits I read about the news on the web and from a variety of newspapers as those shown in the collage above.  I don't read them daily but as often as I can.  In April and May I read stories on The Guardian in the Opinion section.  They were pieces written by immigrants to the US.  Below are some stories taken from my computer screen. 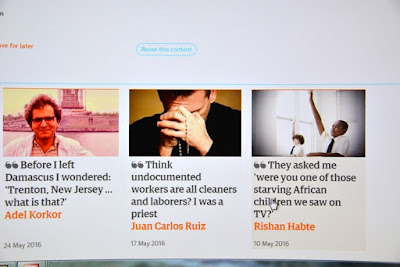 Then I noticed this caption: "Tell us how you got here ... We want to hear from the broadest possible range of people.  Young or old, from near or far ..." you can read the rest in my picture of my computer screen below.  Click on pictures to enlarge. 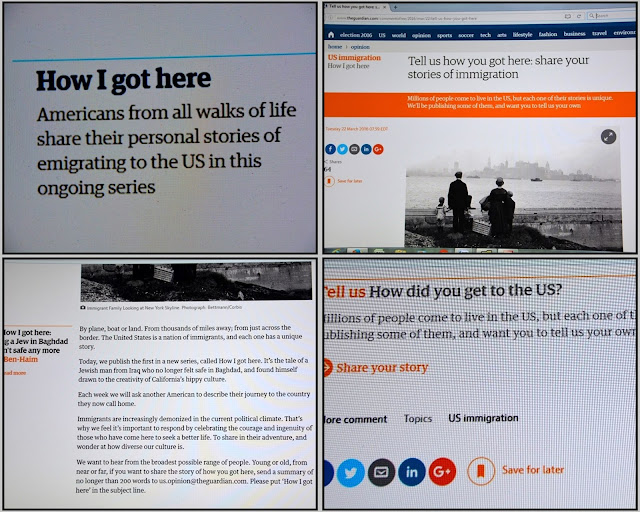 The immigrant stories on the newspaper were from people who had had a difficult life in their home country, such as the story of May 31, 2016, of a young man living in a refugee camp of 30,000.  Many of the immigrants to the US did not speak English well, such as Rossana Perez, story of April 5, 2016, who immigrated to the US from El Salvador when her husband was kidnapped.  Most people in the US now believe that immigrants are coming from third world countries only, are uneducated and a drain to the country.  At the end of May I decided to send my 200-word story to the Guardian to show that I came as an immigrant from an industrialized country - Paris is certain cosmopolitan.  It was not an escape, it was a choice.  I also spoke fluent English; please see my post "A New Year Party to Remember" about a party in London where I also mention my trips to England. Since a teenager, I had taken the ferry from Dieppe, France to Newhaven, England, almost a dozen times.  Below are old postcards of Dieppe harbor station. 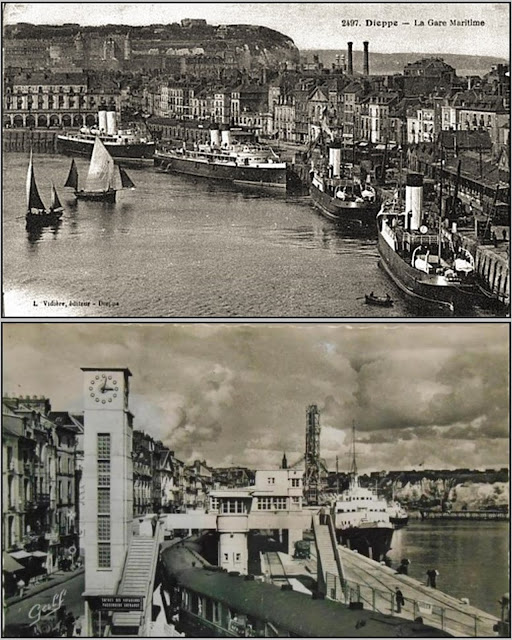 The Opinion Editor replied that she was interested in my story and to send her a 600-800 words piece with some pictures, by the following Friday.  I wrote the story and sent her several pictures, which I'll show below.  I sent some from the time when I arrived in the US when I was young - my senior face is not as fetching!  I did not have a digital camera then and it was not easy finding old photos.  The caption under my photo on the newspaper story reads "I still remember when my hometown was liberated and Mother and I walked on the Champs-Elysees."  I was just a kid then and I did not think a picture of me as a child was appropriate for my immigrant story.  Photo below was taken around Christmas in San Francisco with my pet cockatiel Diego. 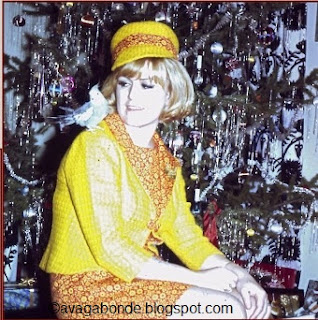 For several days I looked for my story in the Guardian but did not see it.  I thought that the newspaper must receive a tremendous amount of stories - what were the odds that mine would be published?  The Guardian is an English newspaper founded in 1821.  It has become one of the most visited news site in the world.  So I was quite surprised last Tuesday, June 14, 2016, to see my picture and story in the newspaper.  Below is a photo around another Christmas but with my pet parakeet Dimitri. 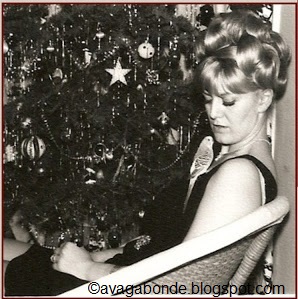 My piece had been slightly edited.  While reading some of the comments to my story I realized that the newspaper had used, in the heading, a sentence that was not in the printed story, but in my email to the newspaper.  When I sent my email containing my essay I told the Editor that I did not know if it would be of interest to readers since I had not been a destitute immigrant, uneducated and terrorized in Paris.  Even though I think it is wonderful that the US accepts immigrants (well, not that many anymore from Muslim countries) not all immigrants are refugees fleeing torture and certain death in their country.  I wrote that I did have a glamorous job in Paris, an apartment, a car and that, actually coming to the US had hurt me financially since I had a higher salary at my job in Paris than in San Francisco.  It did not matter to me because I had not come "for a better life" or in pursuit of the mighty dollar.  I had come to travel, for adventure.  Financial gain had not been my purpose.  This statement was not in my story so the heading sentence was confusing to readers.  I wish instead they had used "I came for travel and adventure."  But maybe happy stories are not as interesting to readers.  Below are two more photos I sent, taken in San Francisco around 1967 or 68, one with a little neighbor. 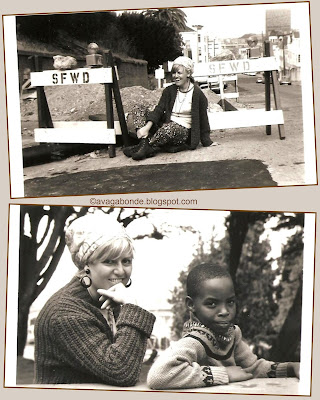 Growing up in Paris, our apartment building was in a "Cité " made up of apartment buildings around a closed courtyard.  On the right side of the courtyard was the Metro Goldwyn Meyer studio in France (MGM-Paris.)  There, they showed films to distributors, repaired them, dubbed them, etc.  My little friends and I would play in the yard listening to the (loud) sound of westerns, horses, etc., coming from the always open studio window.  The boys in our group were the cowboys and my girl friend and I were the Indian maidens.  I got to really dislike cowboys (our boy playmates were rough) and decided that when I grew up I would go to the Indian country.  I came to the US to visit the country, learn the culture, visit Native American areas and listen to jazz, live.  I had a large collection of Blue Note jazz vinyl albums.  My favorite jazz artist was Thelonious Monk.  Money was never in the equation as I said above.  Below is the courtyard in Paris where I played as a child (located near the Sacre-Coeur of Montmartre.) 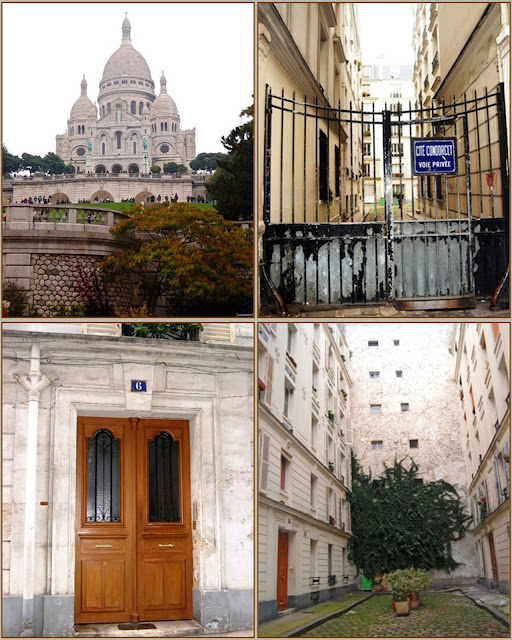 While traveling across the west I was very excited to visit the Blackfeet Nation in Browning, Montana.  I was a bit sad that most of the reservations I visited did not look very prosperous.  Still now it is a treat for me to visit the Eastern Band of Cherokee Indians at their Reservation near the Great Smoky Mountains in North Carolina.  I wrote several posts about it, such as Cherokee Indian Market and Festival of Native People.  By now I have visited 48 US states (not Delaware and New Hampshire) as well as the US territory of Puerto Rico and the US Virgin Islands in the Caribbean region (as well as Mexico and Canada.) 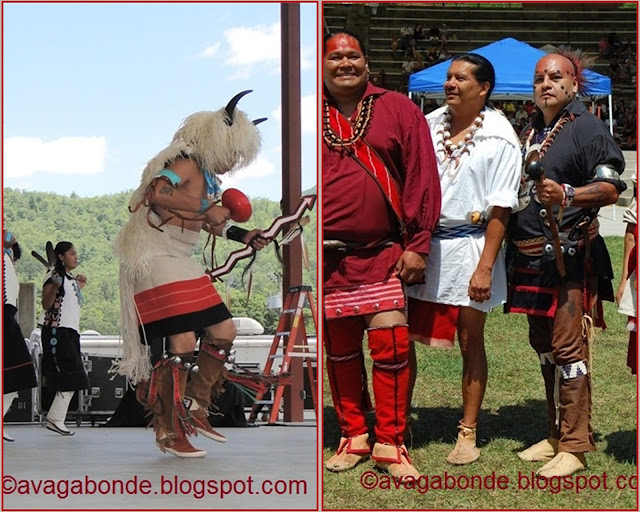 Here is the link to my immigrant story on The Guardian:

http://www.theguardian.com/commentisfree/2016/jun/14/immigrant-coming-america-hurt-me-financially
I hope you will read it. 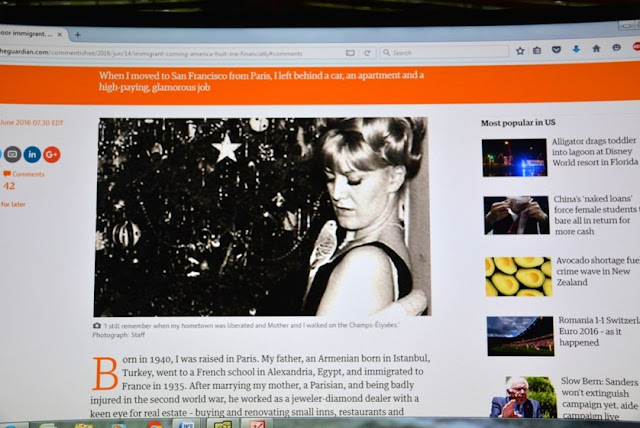 Having my immigrant story published this week was like a gift, in a way, since our 49th wedding anniversary is today, Friday June 17.  My dear readers may recall that I published a post in 2012 on our 1967 wedding in San Francisco and I included some wedding photos - click here to see the post again.  I wish that next year, in June 2017, we may be able to travel to San Francisco for our 50th wedding anniversary, but with my husband's illness, it is uncertain.  Today, to celebrate, we had lunch at a small Colombian restaurant called Kiosco.  First, we were served a garbanzo salad then my husband had Bandeja Paisa/Grilled Steak, Chorizo, Pork Grinds, Maduros, Avocado, Rice and Beans w/an egg ($15) and I had Cerdo en Salsa de Pimienta/12 oz Pork Loin Smothered in Black Pepper Gravy with Rice and Beans ($10.50.)  The food was good with generous portions.  For dessert my husband had the Tres Leches Cake, and I had the Coffee Flan ($5.50 ea.)  The restaurant is located near the Square in Marietta, next to the historic 1860 Murray House. 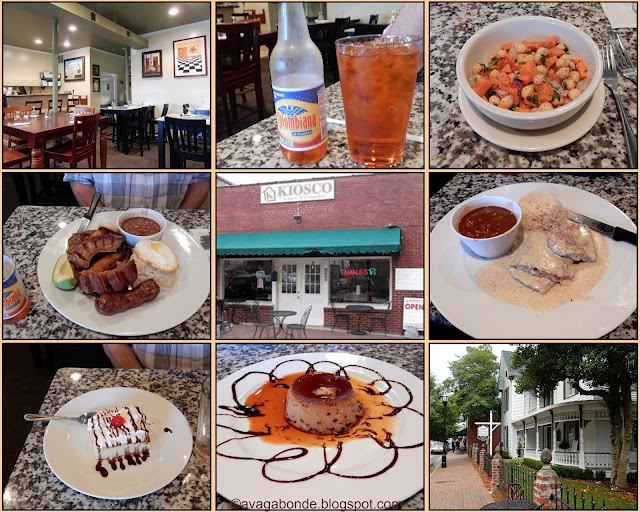 Before we left for lunch it had been quite warm - 93 F or almost 34 C.  But then a severe thunderstorm passed by and it cooled the temperature to 75 F or 23 C.  We sat on our back porch for a while.  Trees have grown so much in our backyard that it has become a green oasis.  We cannot see anyone around our house.  These is some color though because we placed our house plants outside about a month or so ago and they have come alive with new growth and flowers.  Even our Christmas cactus is blooming. 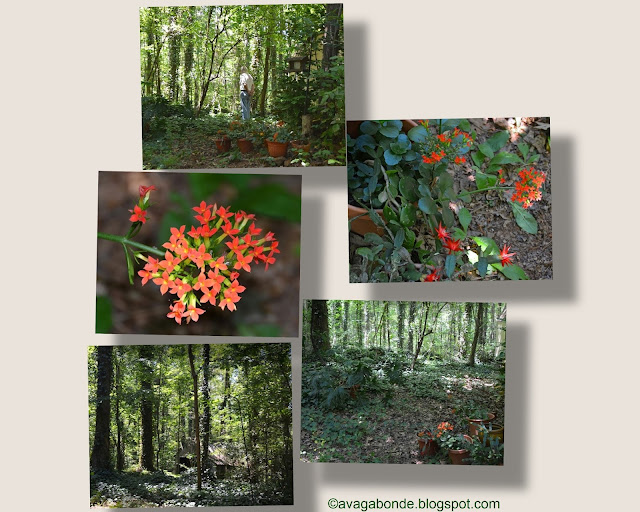 Looking up I realized that we had a mimosa tree now.  I had never noticed it among all the pines.  In France, a mimosa is a small shrub with bright yellow flowers with a delicious fragrance.  The Latin name is Acacia Delbata.  It was introduced in France in 1867 from Australia and now the shrub is growing wild in the French Riviera region. 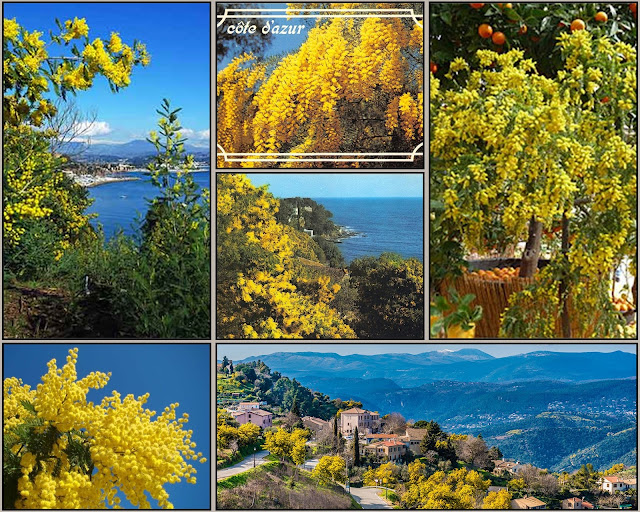 The mimosa flower is so popular in France that several Provencal towns celebrate it yearly in spring with festivals and parades.  A medieval village is even called "Bornes les Mimosas."  It is one of the most florally decorated towns of France with its streets lined with flowers. 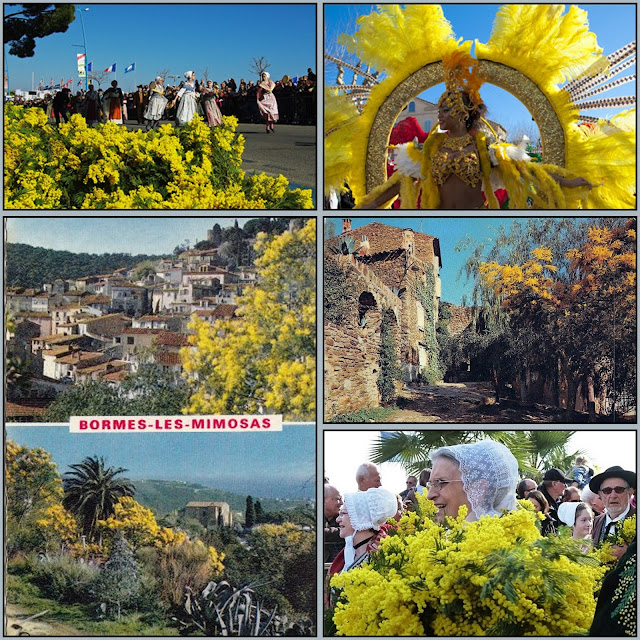 My mimosa tree is not the same; it is an Alizia julibrissin in Latin, also called a Persian Silk Tree.  The flowers look like they are made of pink silky threads above a white or yellow base.  I believe it is growing wild in the South and is invasive; there are many of these trees along our road.  We did not plant this mimosa tree, it just came up.  As I was looking up at the tree I saw a little butterfly hoping from flower to flower. 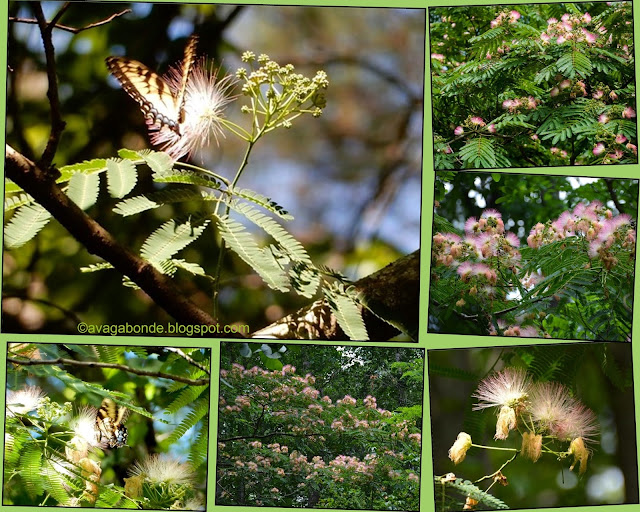 Before lunch my husband went to read in the front yard which is the only area with a little sun.  He planted herbs and flowers there in several pots.  There are some wild periwinkles among the weeds, too. 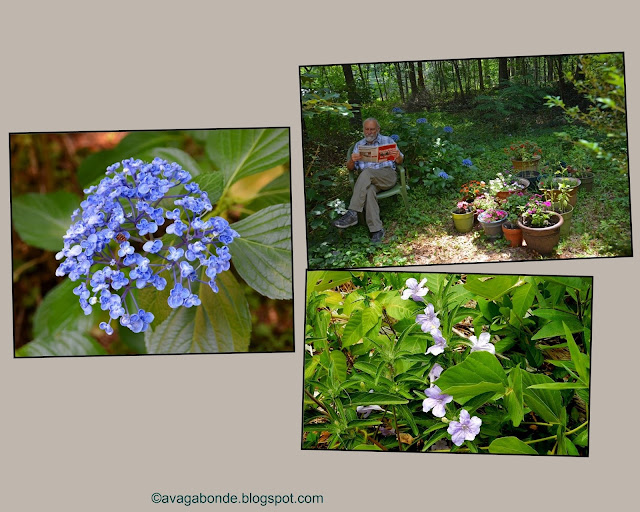 As I was taking his picture I could see something bright yellow in the distance.  It was a sunflower plant growing on the hill that had been clear cut of trees last January by the Water Commission (for an upcoming water main.) 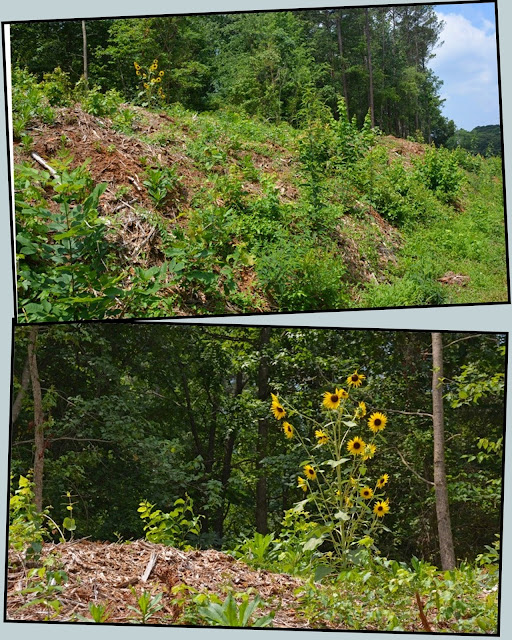 The sunflower plant had grown well out of the wood chips left from the cut trees.  It looked pretty and happy.  So I'll end this post with this happy flower.  After a week of hate, terror and grief in Orlando, Florida and in Britain, it may give us hope that some kindness and love may still grow around us just like this little plant did out of a bleak hill. 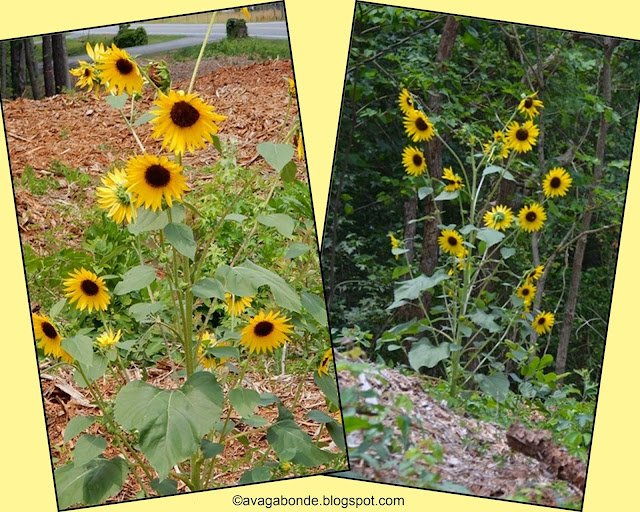