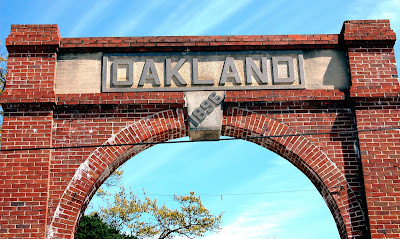 Now that Jim and I have the time, we are visiting sites nearby. For years, when vacation time was restricted, we tended to visit far away places, so we really do not know well many of the interesting sites around us. One of these sites is the Historic Oakland Cemetery in Atlanta. This is a 48 acre "rural garden" cemetery that was placed on the National Register of Historic Places in 1976. It was designed as a rural garden cemetery, a concept imported from France, which started in this country in the mid 1830s. It is located only five blocks east of the State Capitol Building in Atlanta. 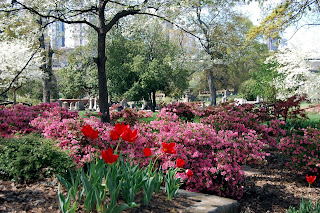 I am not a "tombstone tourist" but after touring three notable cemeteries I think that they are great places to visit and good links to our past. The word "cemetery" comes from the French "cimetière", which comes from the Greek word koimeterion meaning "a place to sleep". The first large historical cemetery I visited was a few years ago with my daughter Jessica, in Paris, le Cimetière du Père-Lachaise, which has over 5300 trees (it was the first private cemetery ever created, in 1804.) She was interested in seeing Jim Morrison's grave who is interred there. We found it and could see by all the flowers on the grave that many other visitors had been by, too. It is a huge cemetery with many famous people buried there, like Oscar Wilde, Bizet, Modigliani, Molière, Edith Piaf, Maria Callas, (click on picture for larger size) 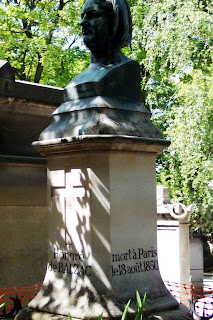 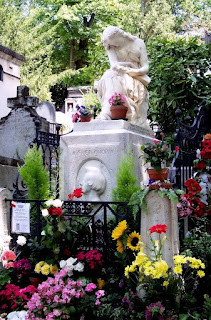 
Marcel Proust , and many others. 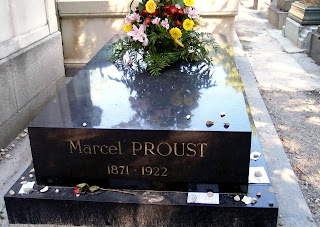 The second large cemetery Jim and I visited was the Bonaventure Cemetery in Savannah, Georgia. I believe this to be one of the most beautiful cemeteries in the United States. It has invitingly laid-out paths, large avenues with gigantic live oaks draped with Spanish moss and graceful statuary. 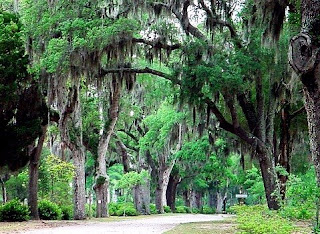 In the Victorian era, cemeteries used to be favorite places to visit. Families went there to have picnics and carriage rides - it was very fashionable. Some cemeteries, in England, were so renowned that admissions tickets were sold (a profitable business!). Greenwood Cemetery in Brooklyn, founded in 1840 had, by 1860, 1/2 million visitors a year. The Oakland Cemetery in Atlanta was popular then and still today thousands of tourists, locals and students visit it. 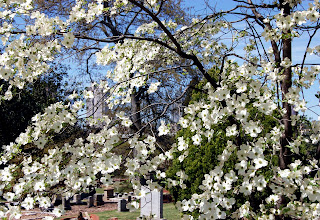 This fountain named "Out in the Rain" is a replica of a fountain made for the 1876 US Centennial in Philadelphia. 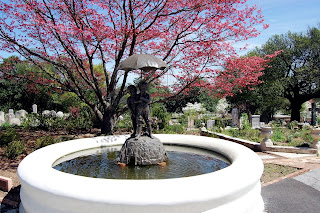 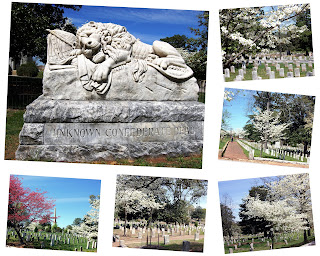 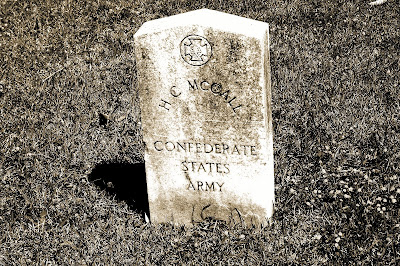 Also interred on the grounds is Robert Tyre Jones (1902-1971) a.k.a "Bobby Jones", generally considered one of the greatest amateur golfer extant. He co-founded and co-designed the National Golf Club in Augusta, site of the famous Masters Tournament. Click on the picture to see all the golf balls laid by fans by the headstone. 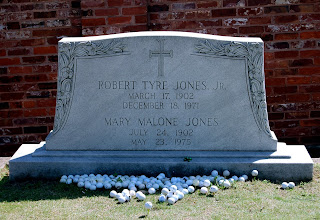 Another notable person buried here is Margaret Mitchell Marsh (1900-1949) who wrote the best-seller and Pulitzer Prize winner "Gone with the Wind". She was often seen riding her pony on the grounds of this antebellum cemetery. 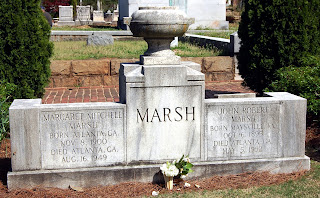 The grave that moved me the most, maybe because it was so simple, by itself on the grass, with just flowers and a purple ribbon, was Maynard Jackson's (1938-2003). He was the first African American mayor of Atlanta, first elected in 1973 and re-elected 2 more times. I saw him often on television and still listen now to his wife's show, Valerie Jackson's "Between the Lines" a book review show on our local NPR station. 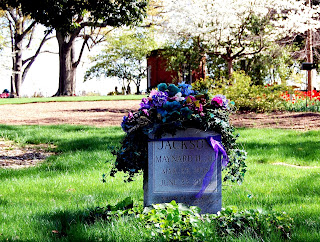 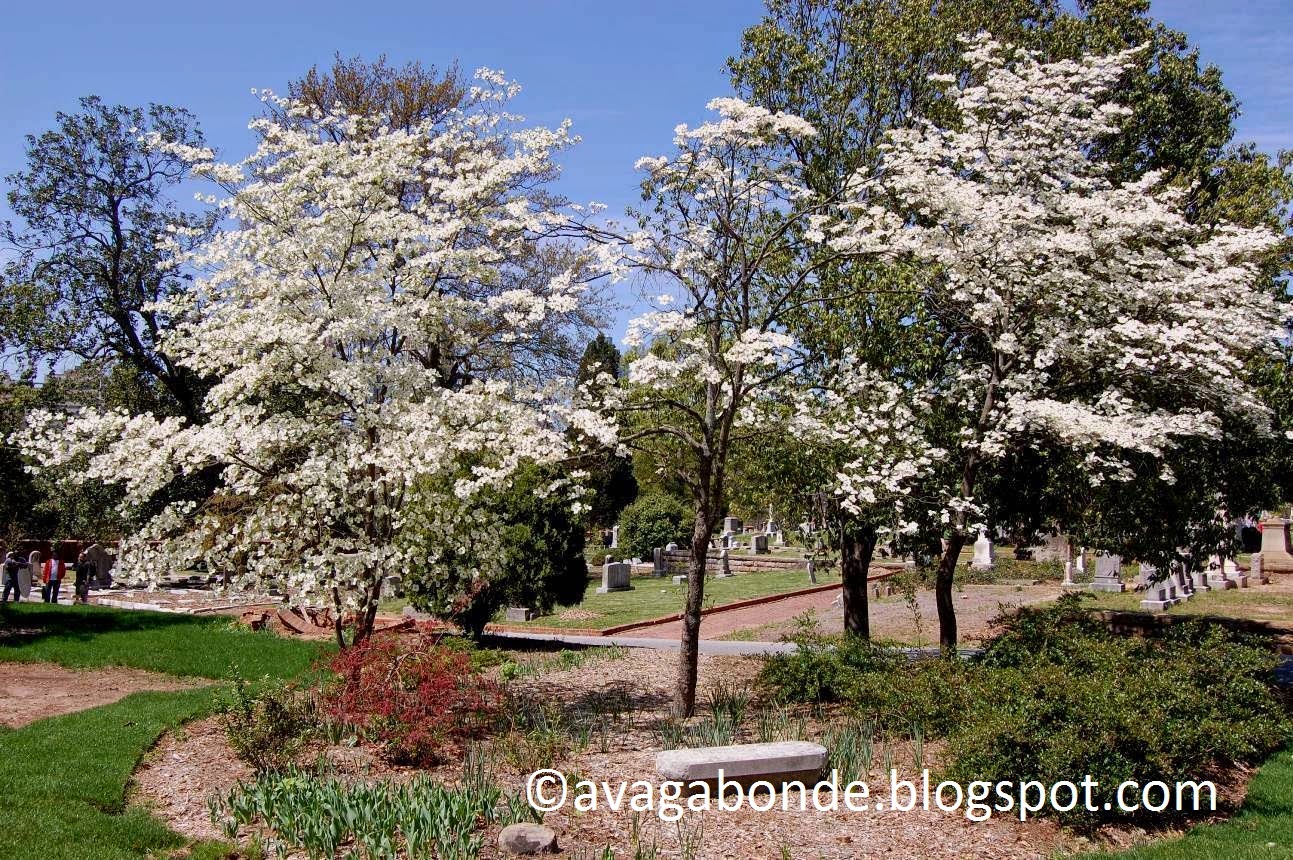 Interesting post and beautiful photography. I enjoy visiting beautiful gardens but I wouldn't have thought of cemeteries as a place to visit. Oakland Cemetery is a beautiful place--what a lovely final resting place.

Wonderful to see the blossom at this time of year!

Beautiful pictures and informative commentary, thanks for this post.

All the years living in Atlanta, I had no idea about the Oakland cemetary. Your pictures are so alive and the history is fascinating. Thanks for the post. It's one of the best ones I've ever read!

Your captivating post and pictures inspired me to visit there with a friend today, on the Rev. Dr. MLK, Jr. birthday! I, too, found Maynard Jackson's tombstone and setting special in its simplicity. I was struck, wandering around, how people across time and space and of different faith traditions seek to defy/deny death, as evidenced by the many faith-based sayings on tombstones and the many crypts/mausoleums. After more than two decades' living here, your post pushed me to visit, finally. THANK YOU.

Merci for the link to this wonderful post. I don't feel like I saw as much of Pere Lachaise as i should have. It was a cold, damp day and we were tired. We saw a lot but when I return to Paris I hope to find it on a day when there's sun and shadows and I'll look up all the places I missed.
V

This is indeed a wonderful post, thanks so much for showing me the way to get here...

I don't know if you'll see this or not, but I'll leave another comment on a more recent post very shortly, I've very much appreciated your recent visits and words left "chez moi", and thank you for your thoughtfulness...

Cemeteries to me are very often wonderfully peaceful places... a place to sleep... how fitting.