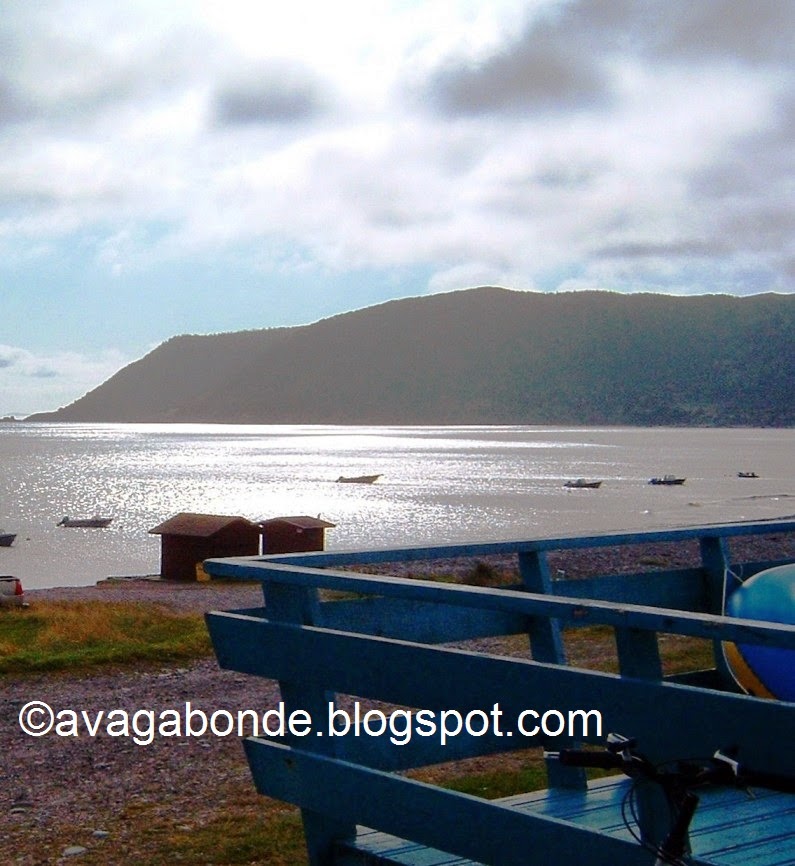 As we came back from our excursion to the Ile aux Marins (see post 25-August -09) we decided to stay one more day so we could go on a tour of the other islands, Langlade (Petite Miquelon) and Miquelon. You can see them on the map above. We booked the day-tour with “Chez Janot.” We were told that the regular ferry boat had been waiting for some spare parts and we would use a “zodiac” which is an inflatable pneumatic boat the kind used for expeditions or white water rafting.

Picture of Janot zodiac (from his brochure)


Early the next morning we boarded the zodiac with Janot at the helm. Janot is a friendly French seaman, a bit gruff and speaking little English. We and three other couples (from Michigan, Quebec and Nova Scotia) wore life jackets and held onto the rope of the zodiac as best as we could as it danced among the choppy waves. It was very windy, even though this was considered a good weather day for the 6 kms (3.2 miles) crossing to Langlade. Fishermen call this strait “The Mouth of Hell” because of the fierce currents. Along the way we saw many birds and some seals. 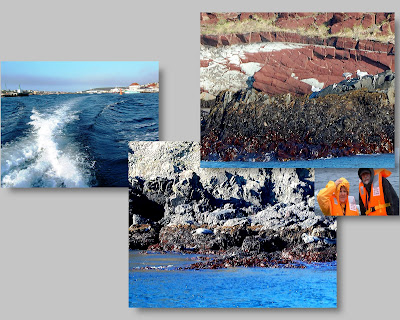 We landed on a cove in Langlade near Janot’s restaurant. We warmed up with hot coffee and fresh croissants while looking out at the sea and the fields. 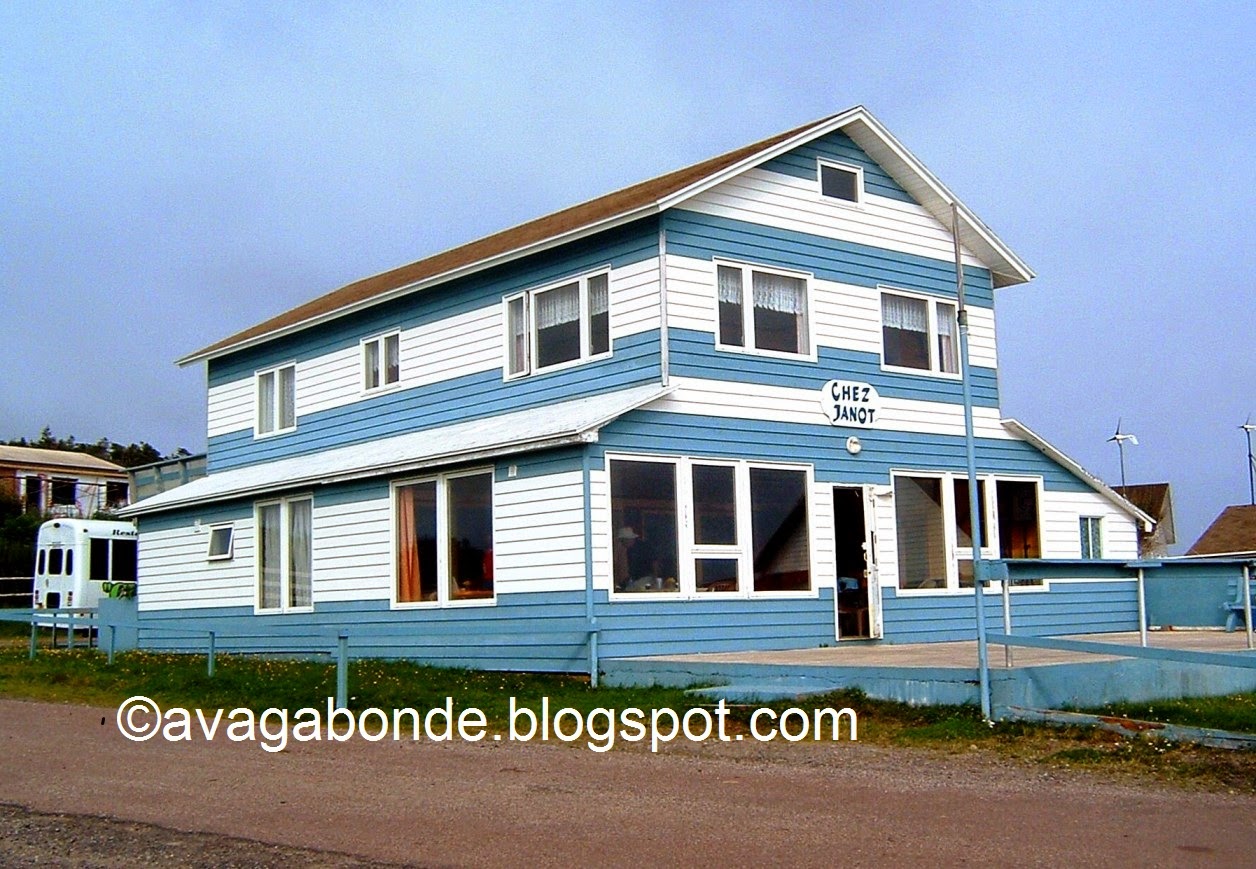 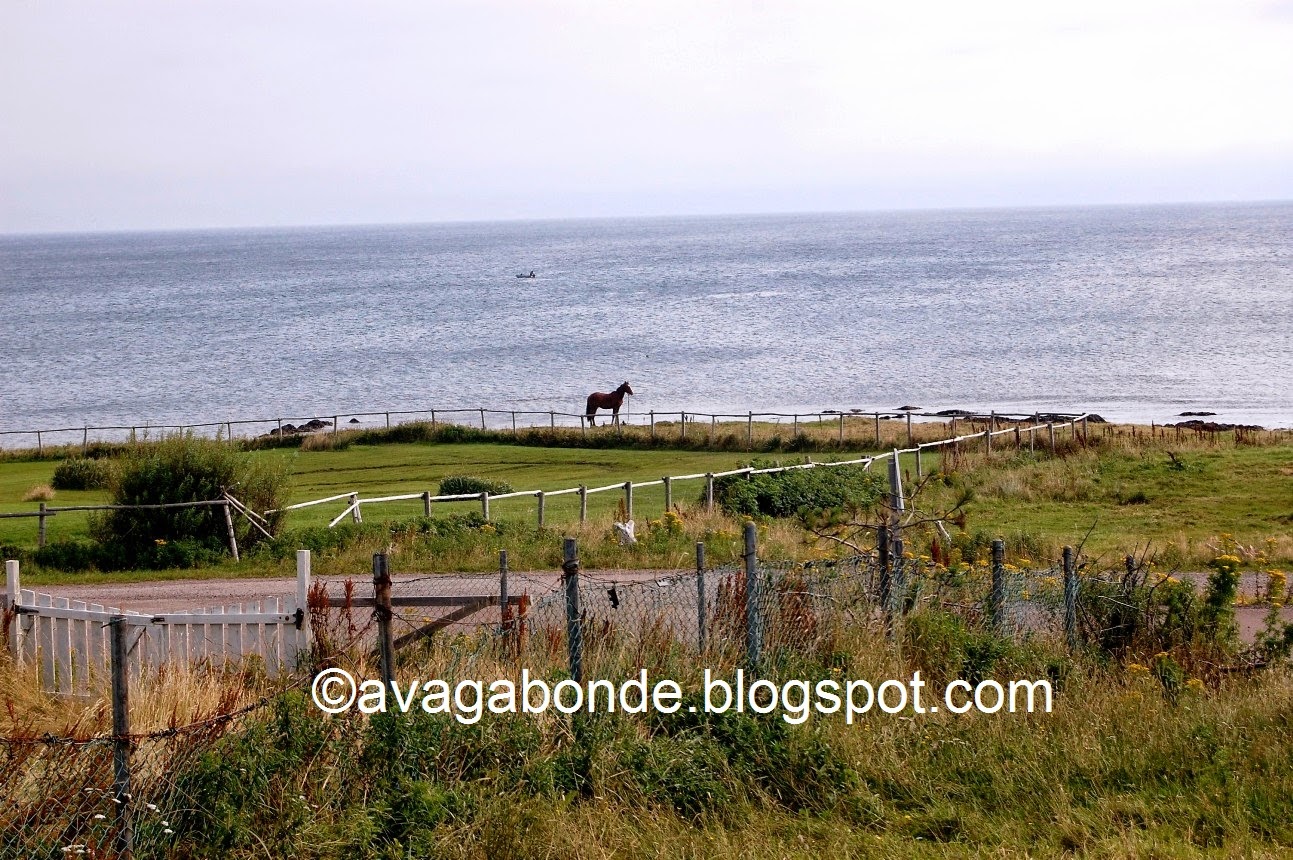 Janot took us to a garden on the island to show us that Langlade has a micro-climate in summer where many plants and flowers flourish. 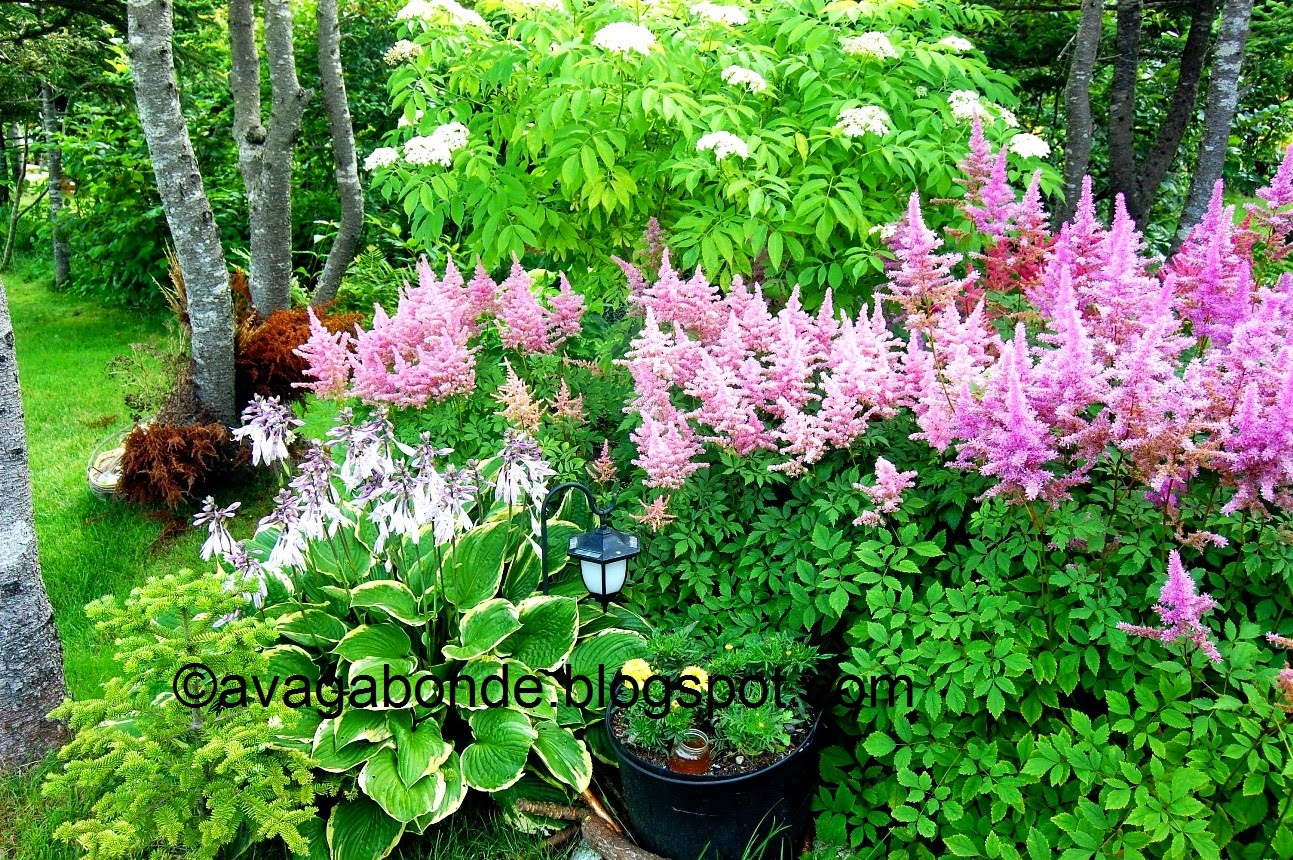 Langlade is approximately 3 times larger than St Pierre island. In summer about 400 people stay on Langlade in the few houses there or in a trailer camp since there is neither running water nor electricity. St Pierrais bring their horses to Langlade for the summer and a horse riding school is busy near the beach. Janot took us to his friends in the trailer area where they offered us a choice of local liqueur, French aperitif or soda. We drank and munched on snacks while speaking with his friends, not as tourists on a standard tour, but as if we were visiting long lost friends – this was a very relaxed and friendly tour. 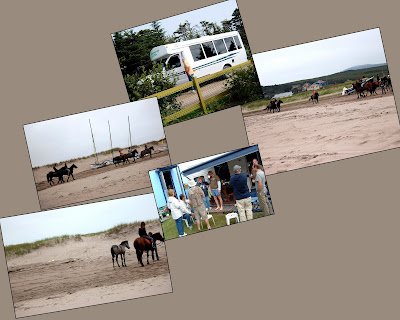 We continued the tour of Langlade where the landscape is quite varied with cliffs, valleys with marshes and wild flowers close to lonely beaches. Janot stopped his van near a high dune and told us to climb up to absorb the stunning view from there. 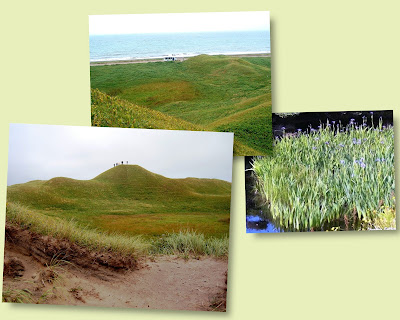 Don't forget to click on the pictures to enlarge them
Because of my bad knee I stayed to take photographs of the pristine beach and unending view. Janot in his van, the others on top of the hill and me alone, gazing at the immensity around me – how peaceful. 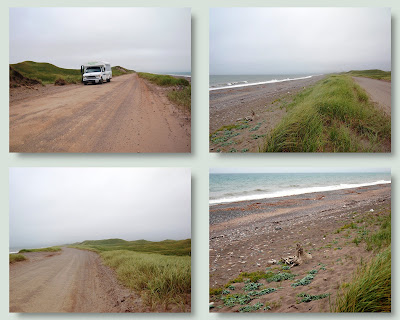 Next to the dunes is a large salted lagoon called “Le Grand Barachois”. It is a great year long habitat for a colony of common seals as well as for migrating grey seals. 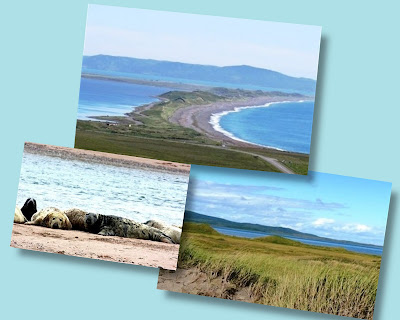 
On the way back to Janot’s restaurant we drove by a large band of sand, called an isthmus (pictured in the collage above, top center.) It connects the islands of Langlade and Miquelon. It is said that this isthmus is the most spectacular in the North Atlantic. Up to the 18th century a small canal still separated the islands, but it was filled by sand after many ships ran aground there. 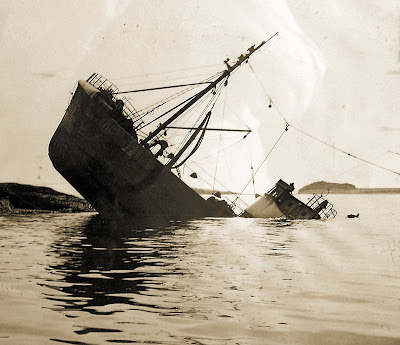 Janot’s wife prepared a very tasty lunch for us that was accompanied by a dry red wine. Now we were ready to drive by the horses roaming freely on the beach and explore Miquelon on the other side of the isthmus – what were we to find there? (to be continued in the next post , i.e.the last part of the trip.) 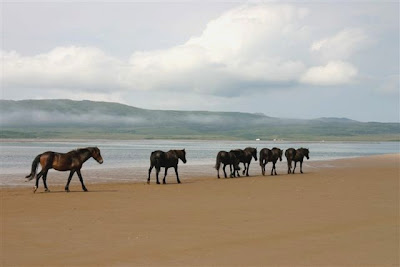 “The greatest romance ever written pales before the possibilities of adventure that lie in the faint blue trails from sea to sea. The perfect journey is never finished; the goal is always just across the next river, round the shoulder of the next mountain. There is always one more track to follow, one more mirage to explore.” -Rosita Forbes 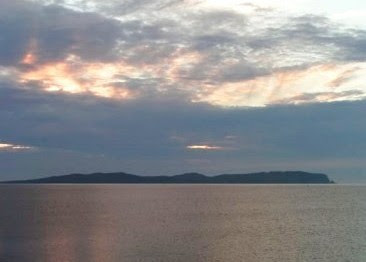 Are those wild horses, VB? Do you ride at all yourself? I think it's a very beautiful place, and I suppose it helped that you are French that you were treated so well... do you think that made a difference? I love the remote feeling this place has.

I do not think these are wild horses because they would not survive the cold winter. I think that some are allowed to roam freely. As for being treated better because I spoke French, no I don’t think so, because I was talking English with my husband and apart from the couple from Quebec everyone was speaking in English. St Pierre et Miquelon is a part of France and not French Canada. Tourism is good for them, so they are very courteous to everyone. Thanks for your comment.

It's really amazing to see all those wonderful flowers at these Islands.
That was my first thought.
You know, we don't have such flowers in landscapes and climate here in Norway. The rest of the flora and nature is very well the same, but he flowers?

btw. Just returned to our summerhouse after a fantastic weekend in Holland;-))

I feel like I have visited the island with you. Your narratives are always so interesting and I learn a lot from you. The beautiful flowers are a delightful surprise tucked away in a spot that looks very wild. I would imagine they would have to be in a sheltered location because of the winds off the ocean. We are able to grow a huge varity of flowers here but don't have the wind to contend with. I look forward to the last part of our tour.

What a great post and beautiful pictures. I love the sea and the kind of life that it stimulates from flora and fauna to humans. I look forward to reading your older posts when I settle into September. Thanks for visiting my blog.
Blessings and smiles

Your thorough visual and word tours are just wonderful. I feel I know this island now. How good to have such a homey guide too.

I meant to say in your last post that a secretary at work is from Newfoundland, well her relatives are. And none of them works, the area is so depressed. It's sad what has happened there with the overfishing and all. I have always wanted to explore this part of the world, since my photographer brother Bennett (now passed) explored Nova Scotia.

That first photo is gorgeous, I want to sit on that deck quaffing Billecart Salmon then chase horses on the beach. Beautiful

I agree with Baino - that first photo is just spectacular.

I am traveling vicariously with you and enjoying every minute.

Yes, I have definitely decided to visit next time I'm in Newfoundland!
Beautiful.
A barachois in Newfoundland is often pronounced "barasway" and is the ridge of pebbles thrown up by the waves along the length of the beach.
As you are a French speaker, did you find that the people of St Pierre et Miquelon have a N American lilt to their accent? Anything like the joual of Quebec?

TorAa, Elaine, Carolyn, Ruth, Baino, Darlene – It is always a real pleasure to read your comments. Thanks for taking the time to write them.

Shammickite – There are so many people in St Pierre who are from the “Metropole” (what they call France) and have no accent. Our waitress was from Paris at the restaurant. The rest may have a small accent like the Bretons or Normands, but nothing like the Québécois. You can really tell when you hear the French Canadians, their accent is quite strong. Thanks for commenting.

Thank you for your visit....! This looks like it was quite an amazing trip...WONDERFUL Pictures! I am completely unfamiliar with this place...I feel like I took a little bit of the trip wih you...!

What beautiful landscape with its fauna and how well documented with very nice photos!

Btw: I did rafting at the Barents Sea north in Norway once. It was quite exciting :-)

Just arrived back in Madrid after 2 months of being gone and what a treat to come to your blog and be able to "accompany" you in the unforgetable trip to Petit Miquelon. You know, the photographs you showed - and I was able to observe carefully after enlarging each one - reminded me a lot of southern Patagonia. It sounds as if your French helped bring down barriers and you were able to enjoy a special tour of that unbelieavable island. You take fantastic photographs too. I hope your knee is feeling better.

These island are fantastic. What strikes me most from your photos and cards is how clean and bright and scoured by wind and weather the landscape seems.
Getting on the zodiac must have been scary; I certainly would not have been feeling very brave.

Another wonderfully evocative blog. You can almost taste the salt in your pictures and feel the sea spray in your hair. The crossing in the zodiac reminds me of a similar open boat crossing in choppy seas across the strait from Mull to Iona, many years ago now. Did you ever see that film about a murder on St Pierre? How a fisherman was condemned to death and how a guillotine had to be brought from France but how then no one would unload it? Macabre and haunting.
Why is Miquelon/Langade so unpopulated compare with St Pierre, I wonder?