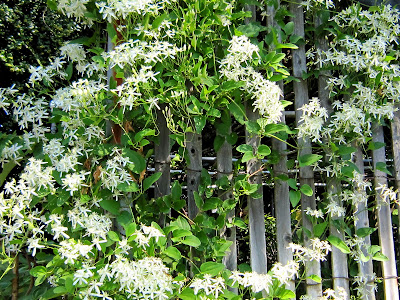 The Smith-Gilbert Gardens are very scenic with a great number of exotic and native plants. They are an exciting way to connect with nature. I was going to write two posts on this garden but there were just too many sights to describe and too many images to capture. Even though it is not large, the contemporary sculptures, the tea house, the ponds, waterfall, conifer display, rose garden, bonsai garden or just the peaceful ambiance of the garden makes it a very special place to visit. (Please click on the pictures and collages twice to see all the details.) 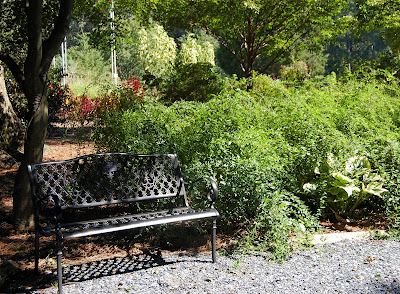 Presently I came upon another garden, a vegetable garden, behind a wooden fence. 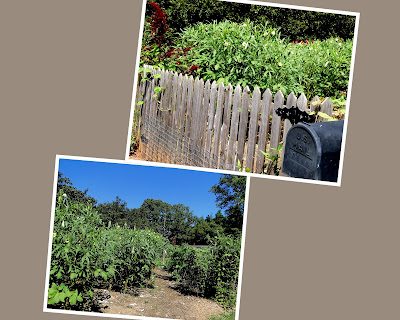 The Smith-Gilbert vegetable garden participates in Plant-A-Row for the Hungry. Both the American and Canadian associations allow gardeners to help their communities by growing and donating fruits and vegetables to charitable organizations such as soup kitchens. The Smith-Gilbert Gardens works in partnership with agencies across Georgia benefiting food banks. Below is some good looking okra. When I find nice okra at the market I make my okra-tomato-onion casserole with spices from Dubai, then add fresh herbs…..délicieux! 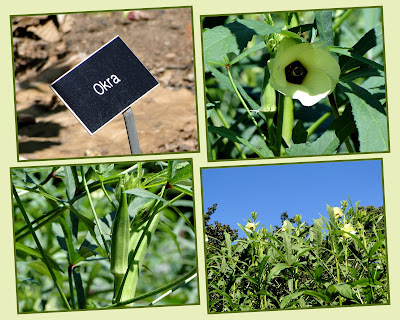 A border of zinnias was calling to me to have their photos taken. Voila… 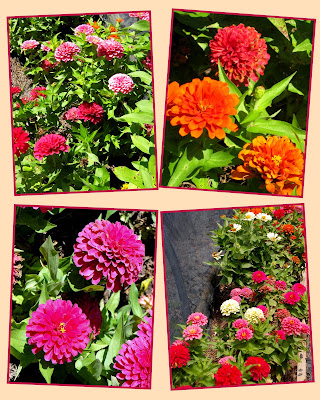 Others enjoyed these flowers as well. 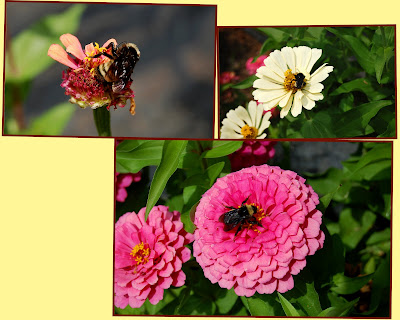 While I was taking my zinnia pictures, my husband was admiring the bonsai garden. 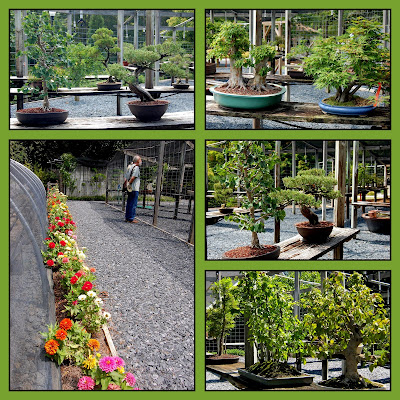 Dr. Bob and Richard Smith were Atlanta Bonsai Society members and created this bonsai collection over 35-years. This is the only public bonsai garden in Georgia. We kept walking and passed the area offering for sale some of the plants growing in the garden. 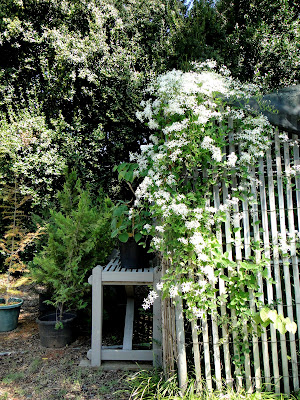 Turning around a shady trellis 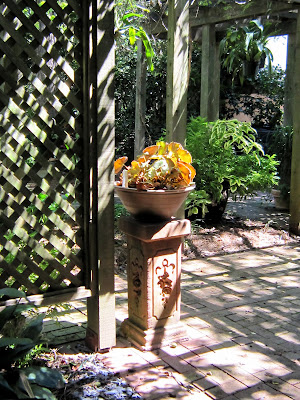 we entered the Begonia Collection. 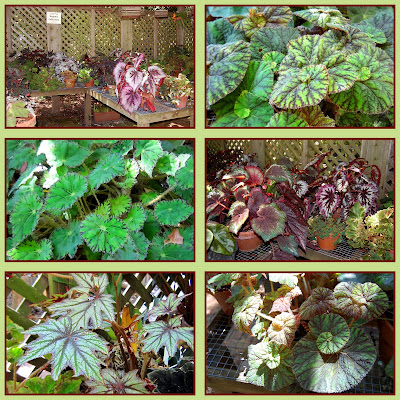 Passing by large borders of coleus 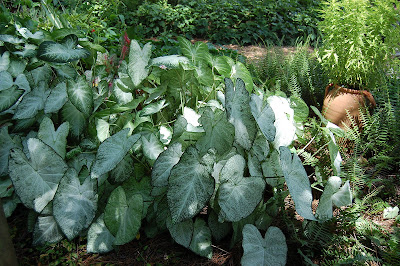 we saw a small pond on the side of the house 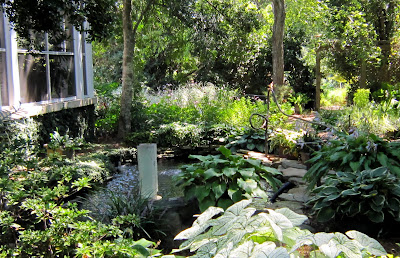 where some colorful koi were swimming. 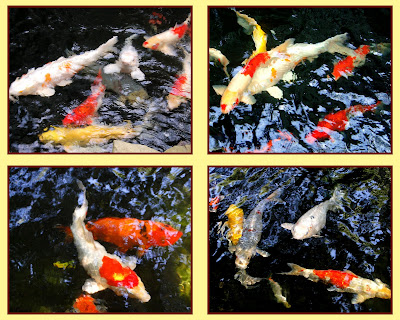 They moved so quickly that it was hard to photograph them. My camera is not quick enough – I would think I had taken the whole koi and only had its tail or its head. 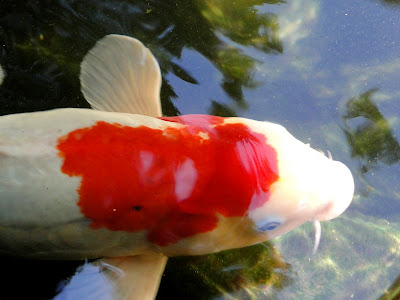 While I was trying to capture the koi with my camera, Missy, the house guardian, was watching me with interest. 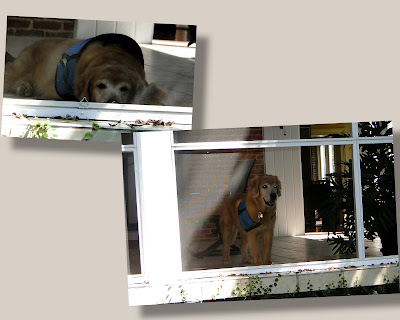 My husband had gone ahead toward the bird feeders. 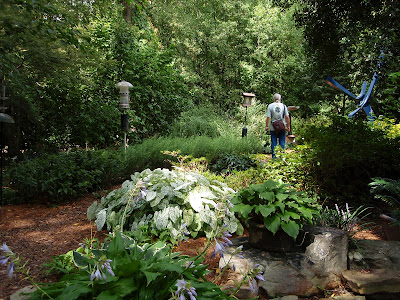 This was a nice bird habitat with bird feeders and the bird bath is a sculpture by Seattle artist Jon Hudson. 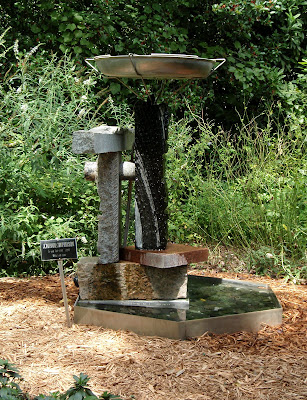 This piece is entitled “Ts-ung Tube XXII” (1985.) This is a stone sculpture inspired by an ancient Chinese jade ritual object called “ts’ung tube,” symbol of unity of heaven and earth through squares and the circle. The birds seem to enjoy this meaningful bird bath but most flew away before I could snap my pictures. 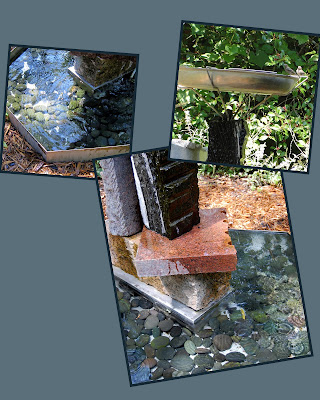 The little birds had plenty to eat in their feeders. 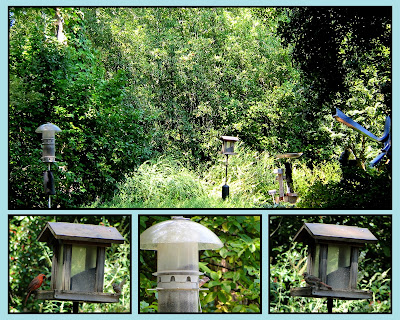 These gardens are such a hidden gem that we decided to become members and went back to the desk at the house. While I took a peek at the gift shop my husband found Missy, the house dog. 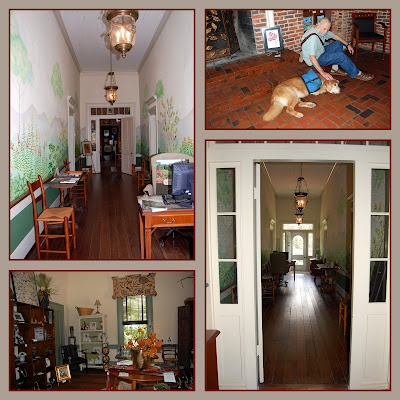 The volunteer at the house gave us more information on the house and gardens. When Mr. Smith died in March 2002, Dr. Bob worried that the property could get into the hands of developers who would subdivide the land and bulldoze the gardens. Wishing to preserve the unique character of his historic house (circa 1882) and gardens, Dr. Bob Gilbert started negotiations to sell it to the city of Kennesaw. The City of Kennesaw bought the property in late 2004 for $2 million with funds from a $12 million parks and recreation bond. A 505 (c) (3) charitable foundation was formed to support the gardens and the Master Gardener Volunteers of Cobb County partnered with the City to help maintain the gardens. 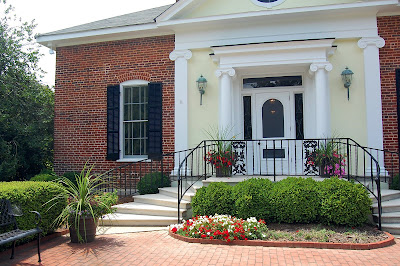 Dr. Bob remained on the property until the fall of 2009 waiting for the completion of his new home in Franklin, North Carolina. He visits the gardens often to work with the Bonsai Study Group. Dr. Bob now writes a column on horticulture in the Franklin Press. We found out that by becoming members of the Smith-Gilbert Gardens we became members of the American Horticultural Society Reciprocal Admission Program – which gives us free access to about 120 gardens in the United States and some in Canada. C’est magnifique – I see more gardens, trees and flowers in my future! 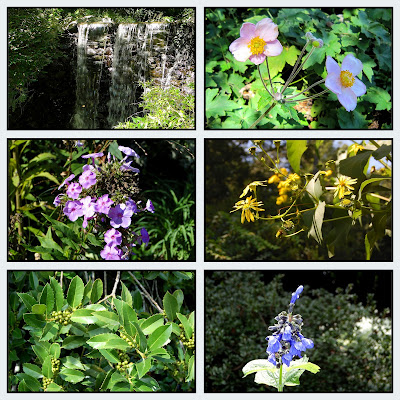 But it was time to go. Before returning to our car we stopped in the picnic area. Even there the trees had identification panels. 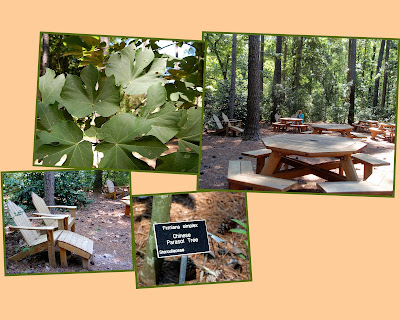 Another car was parked next to ours. In the back it had a little panel that read “Master Gardener Volunteers of Cobb County.” Someone was taking care of the gardens. 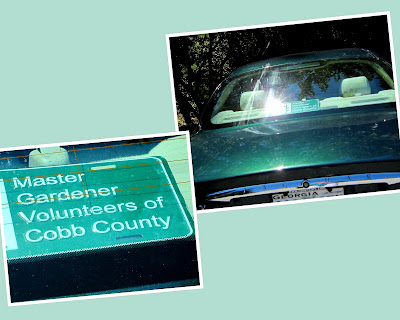 As I was slowly driving away my husband suddenly said “stop.” He had seen a couple of does in the rear-view mirror. I quickly picked up my Sony DSC-HX1 which has a better telephoto lens than my Nikon D40. I could not open the car door or move too much as I was afraid I would scare the does away – luckily the car windows were open - so I aimed my camera backward while looking in the rear-view mirror. I think that the photos are not too bad considering that I was pointing the camera to the rear in a blind way (.. and I shot mostly the rear of the animals…). 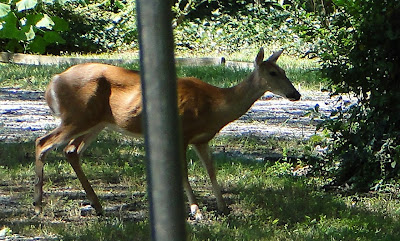 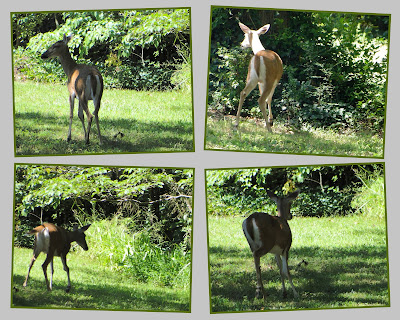 We will certainly come back to visit these gardens throughout the year to witness its seasonal beauty. To wander into natural environments and beautiful gardens keeps us mentally happy. A garden such as this one, so close to our home, and where we can bring a thermos of coffee, a couple of biscotti, a good book and can relax in the pretty picnic area or on one of the many benches, is a treasure that we are pleased to have found. It is no longer a secret to us. 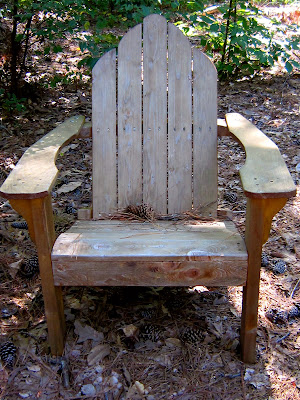 If you have a garden and a library, you have everything you need.
-Cicero 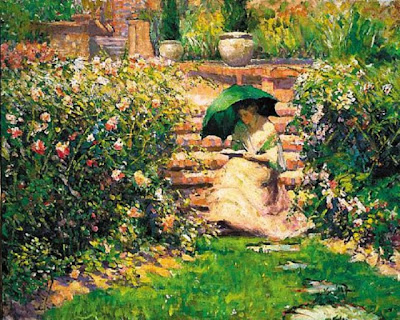 What a lovely place, VB! I have enjoyed the peacefulness and elegance of this garden, which is now a place you can visit often, and I will be graced with your pictures of the seasonal beauty I'm sure you will share! I enjoyed our walk.

I would love to see those gardens and it is good that they are being looked after and unlikely to be bulldozed for development. Love the shots of the deer. You are lucky to have such a place close to home. Diane

Garden volunteers are special breed.
I enjoyed this private tour, and it has made me wonder about joining one of our local gardens - but first I'd like to learn more about the reciprocal agreement. We've belonged to a couple of garden societies before, but this is the first time I've heard of this.

That is a splendid post. So much to enjoy.
The photographs blow up so well - loved the little birds.
Your casserole sounds delicious and what a treat to get inside the house. The photograph of the hallway is so atmospheric.
Your zinnias look just like one of my dahlias. And I wonder what the small white flower is. Jasmine?

Love the deer and koi fishes.

So many beautiful things to see, and by the time I get to the comment box I've forgotten everything but the deer and the dog.
Fabulous that you joined and then found out later you could visit so many other gardens with your membership. You've really opened up possibilities in your life as well as your photography.
— K

Vagabonde, the more that I see of this garden the more I appreciate that its creators have established.

I have passed along all this info to a relative who lives in your general area. Perhaps she will also know of this secret, or might even wish to join the volunteers who keep it growing so beautifully.

What a lovely garden and place to visit. You have shared it well with us.

What a rich and beautiful post. Again, lots of sights and lovely photos. I must admit, this is the first time I see Okra as a plant and not cut-up. Now that and many other flora and fauna are absent here above the 49th parallel. You're so fortunate to be able to visit all these gorgeous places I may never see. A bonsai garden, what a great idea. Again, something that I haven't even heard of... not even in Vancouver. Well there's a Japanese garden on the UBC campus, but not a bonsai garden.

Wonderful! It really reminds me of a National Trust or other British place and I ignored that one can find such beauty in the States. I am in awe of 120 counted species of birds and love all the details you have shown here. This flower painting entrance hall is stunning! How lucky that you are living so close to such a well looked after paradise. Merci de partager tes passions!

Another beautiful post of these gardens. There is lots to see there and I love your explaining.

so beautiful!!
thanks for sharing..such a lovely post!!
these gardens are just gorgeous!!

this is Belgium said...

what a delightful informative and beautiful post !
it might come in handy one day as I have relatives not too far away
I LOVE Cicero's wise words, wondered what it sounded like in latin?
bonne nuit !

What a FABULOUS Garden..! What a FABULOUS Place! And how smart of Dr. Bob to do what he did to insure the preservation of this unique and beautiful place....LOVED ALL THREE POSTS, My Dear! And I can understand why you and your dear husband "joined"....this is a True Treasure of a place....!

so many wonderful things

I'm so glad that you decided to do three posts on this wonderful garden. It is absolutely gorgeous! I always love wondering through beautiful gardens like this.

May you spend many more happy hours in this beautiful place!

When I visit a garden, I'm always on the look-out for the vegetable plot! Okra flowers are quite pretty enough to earn a place anywhere, I think, although we can only grow them in the greenhouse over here.

What a wonderful place, lovely description and pictures.

You post about this lovely garden reminds me of all the wonderful gardens that I visited on a garden tour close to my home. But of course, the gardens that I visited were small private gardens, and not as extensive as the Smith-Gilbert Gardens. Beautiful pictures, I hope you go back often and show us more pictures of your visits.

Love your pictures and the Cicero quote and also the picture of the lady reading in the garden with the green parasol. The Begonias are handsome indeed!

If I had okra the way you described fixing it, Vagabonde, maybe I'd learn how to like it. HA!

I'm so glad you now have access to all the hundreds of gardens by purchasing this one membereship. Knowing you, you will now hunt them all down. I have a feeling that will be just exactly what your husband will enjoy, too!

Oh, how lovely! I was rather wild about all the flowers and foliage, but when I saw those does -- how perfect to catch them in this way. I find them lovely -- front or hind! Whenever I visit you, I discover places I would love to go. What a gift!