A stay in Bangor, Maine 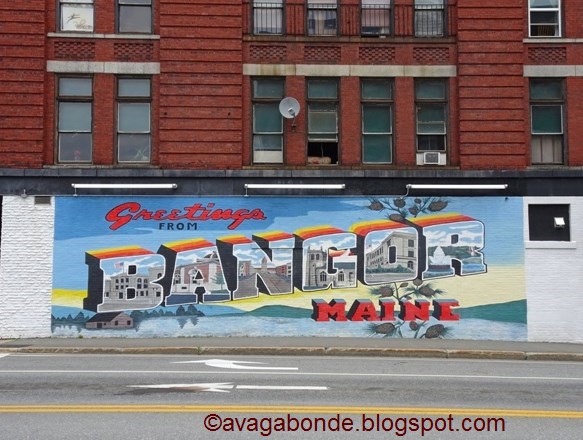 In mid-November I was back in Greater Atlanta, Georgia. I intended to take pictures in a park nearby for a fall blog post. Time went by too quickly and instead I just took a couple of photos of the leaves in the backyard. 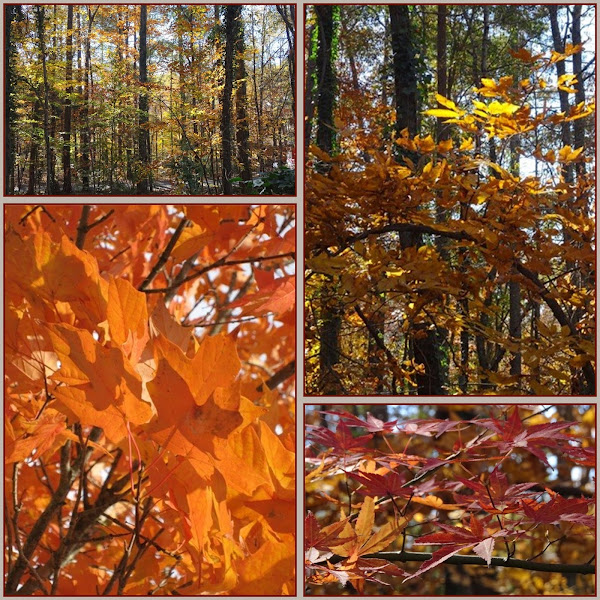 In lieu of this fall blog post I'll relate my summer stay in Bangor, Maine. In early June my daughter asked me if I would like to drive with her, my son-in-law and the kids to Bangor, Maine. I replied, no thank you - it is too far. I had only planned to drive the two hours north to Paducah, Kentucky. Nashville, Tennessee to Bangor, Maine is about 1,330 miles (2,140 km) about the same distance as Brussels, Belgium to Budapest, Hungary - it's quite far as I said. 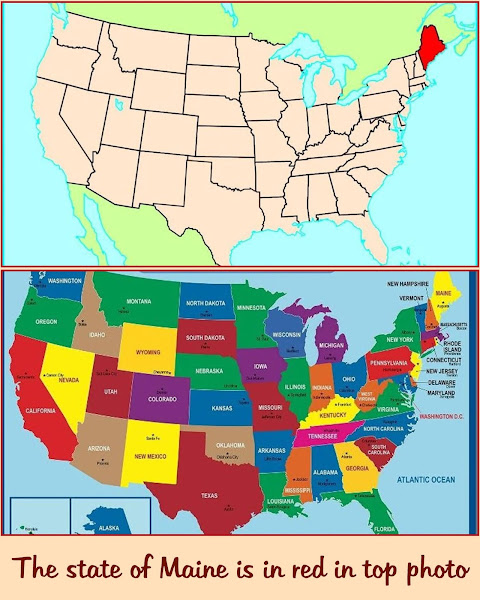 She explained that three of the four grandchildren were going to attend several weeks of Chinese language immersion summer school in Bangor. She only could stay with them part of the time but then had to get back. As an enticement she offered to have me fly there and then she would come back when the Chinese school ended. She said we could drive down the coast of Maine and on the way stop a day in Kennebunkport, Maine, then New Hampshire and also in Newport, Rhode Island where I had always wished to go, and then stay in Boston a couple of days and I could fly back from Boston. So I went. Because Bangor is close to Acadia National Park summer lodgings are difficult to find. My daughter could only find a small farm to rent. The owners lived in another house adjacent to the original farm. The owners, the wife, drove a Prius, a Toyota hybrid (instead of one of those big SUV vehicles) and the husband, a pick-up truck. Actually, compared to Nashville and Atlanta, there were a lot less SUVs in Maine (where winters are rigorous and they could say they need them, not like in Deep South downtowns ... but in Maine they are more mindful of the environment.) 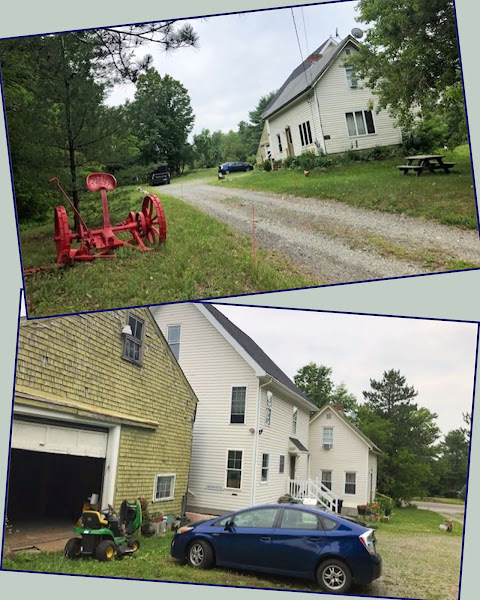 The farm was built in 1900. Chickens were free to roam and would come to the front door. They would run to greet us as soon as we drove into the farm. Horses were in the back near a wildlife trail. (Click on collage to enlarge.) 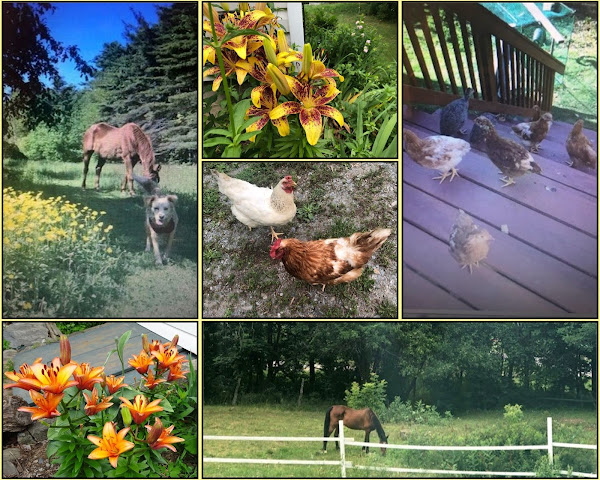 I took some photos of the interior but found some better ones on the owners' site (theirs were taken in winter.) The farm has 3 bedrooms, a large bathroom, a kitchen with eating area and two front rooms with a piano. I stayed in one of the upstairs bedrooms. 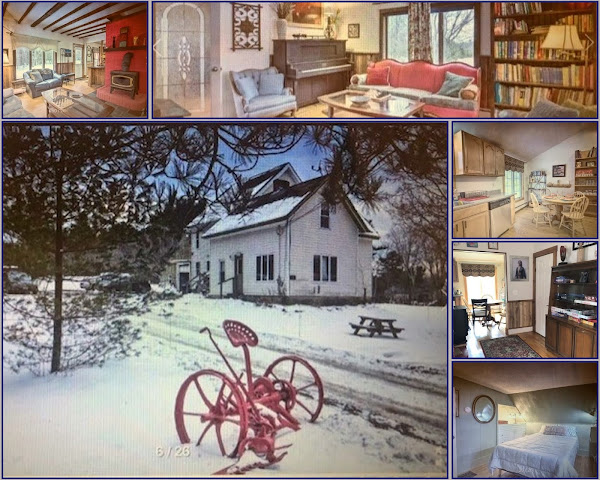 My daughter and her family drove to Maine a week prior to the start of the Chinese summer school so they could visit the area and Acadia National Park. This park is about 41 miles from Bangor. It is located on Mount Desert Island and Isle au Haut. The highest mountain on the Atlantic Coast of the US, Cadillac Mountain, is in this park. 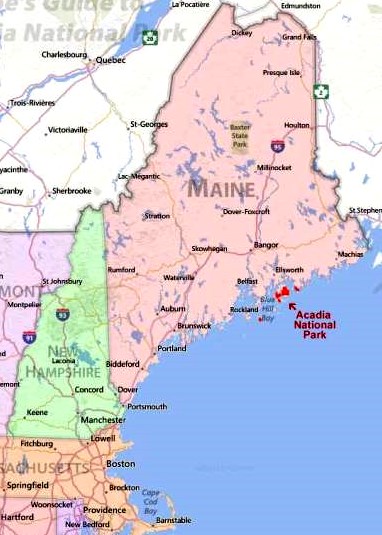 In its 49,075 acres (76.7 sq mi or 198.6 km2) the park contains wetlands, forests, meadows, mountains, lakes, streams, beaches and a large diversity of animal and plant life. Millions of visitors come to the park and I believe reservations are required now to enter it, at least in the summer months, because of the congestion. In 1929 the name of the park was changed from Marquis de Lafayette Park to Acadia National Park in honor of the former French colony of Acadia that used to include Maine. The center photo is of my son-in-law - he had to fly back to Nashville after a week in Maine. 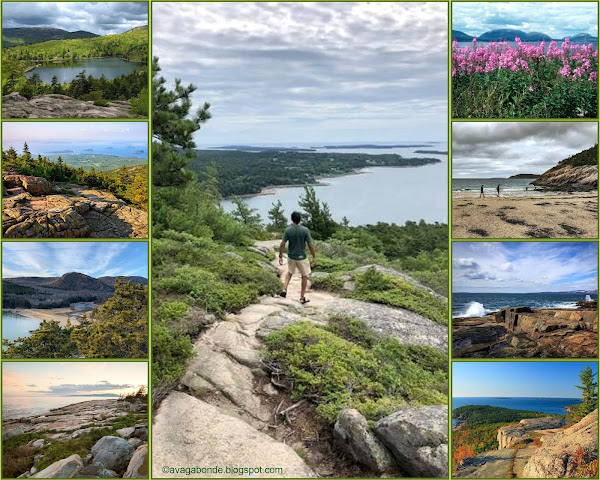 My daughter flew back to Nashville after her 3 weeks and left the big van in Bangor. They use this large van to transport the 4 kids, 3 adults (including the au pair) and two dogs (no SUVs for member of my family.) For commuting to work they just have two small passenger vehicles. But the van is quite high and long - I was afraid to drive it. Fortunately the au pair stayed during my time there and he drove. He is an Italian of Moroccan ancestry and his family lives in France now, so he speaks Italian, Moroccan Arabic, French and English. We ate most evenings in local restaurants and pubs, apart from the day the Italian soccer team won the European Soccer Championship, its first time since 1968. Our au pair was so overjoyed that he treated us to a pizza dinner. That week was also my youngest grandson's 10 years old birthday. He requested a chocolate cream pie. I found a bakery in Bangor that was able to bake one especially for him. Below is the van, the bakery, the pie, the au pair with the Italian flag wrapped around his shoulders and my grandchildren. The grandson in the center is letting his hair grow to donate to a group helping young cancer patients who lost their hair. 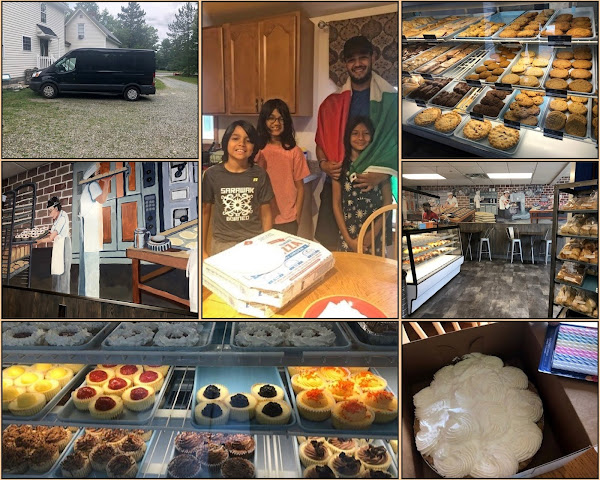 The first Sunday after I arrived I was pleased to meet one of my blogging friends for lunch in Bangor. I had been reading her blog for years until she eventually stopped blogging. Ruth's original blog was named "synch-ro-ni-zing" and her last blog, ended in 2017, was called Birds of the Air quilts where she showed the quilts she made. Ruth and her husband retired and moved to a small coastal town in Maine, not far from Bangor. It was so much fun meeting her after having read her blogs for over a decade. We met at the Mason Brewing Co. Restaurant along the Penobscot River. We ate outdoors as it was a warm day and also because of Covid. 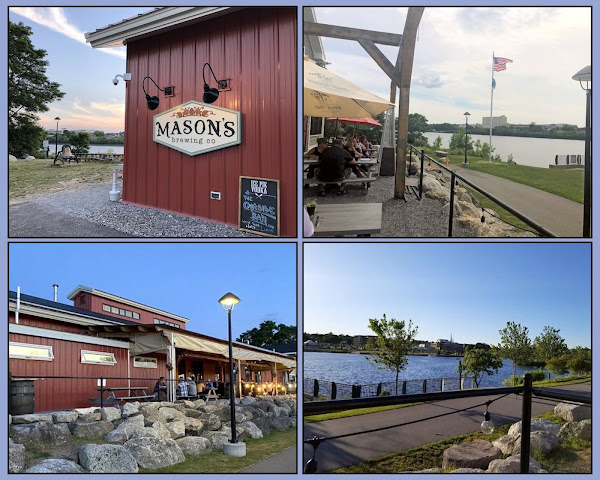 I was surprised by the long list of beers and ciders. Ruth told me that there are a great many pubs and restaurants in the area featuring local artisanal beers and ciders. Later I read that behind Vermont, Maine has the second highest number of breweries per 100,000 residents in the USA. The 100 or so local breweries produce New England IPAs, English ales, stouts, porters, sours, Belgian, farmhouse, lagers and more. They have the largest variety of hard cider that I have seen outside of France and Belgium. Most restaurants and pubs will offer "sample beers" of your choice in 4 small glasses. I did not try them since I am more partial to cider. 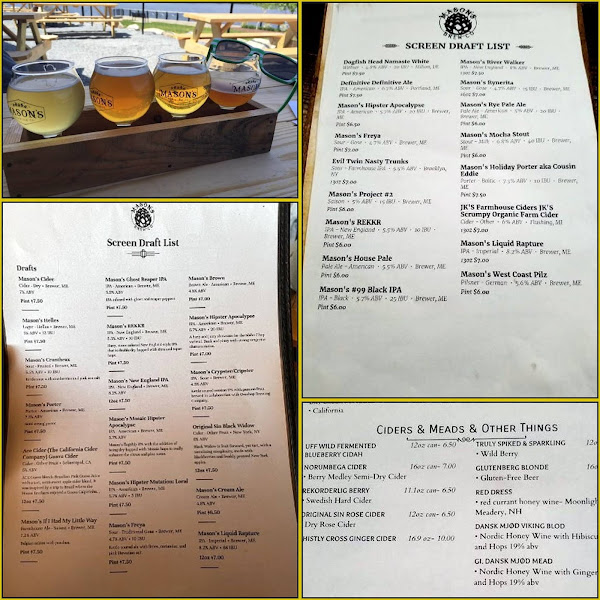 I remember writing Ruth and telling her I was going to stay in a small town in Maine - Bangor. She answered that Bangor was one of the largest cities in Maine, and with 32,000 residents is considered the unofficial capital of northern Maine. Well, when you consider that the population of the state of Maine is 1.34 million, Bangor is ... large. But coming from greater Atlanta with 6.09 million and the state of Georgia with 10.83 million, I thought Bangor was tiny ... oops! The weather was nice though, not as warm as in Atlanta. We did not have to use air conditioning and I was chilly a couple of times. Of course, in winter it must be quite cold - much too cold for me. Here are a couple of photos of the city in winter (courtesy the Bangor Daily News.) 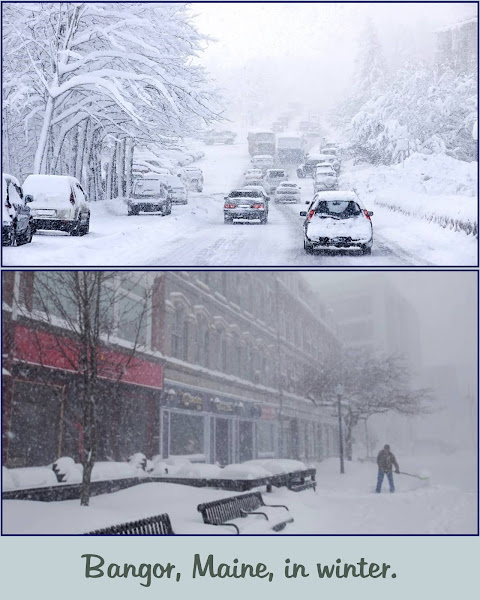 Definitely a city to visit in summer, in July like I did. At least for us southerners ... 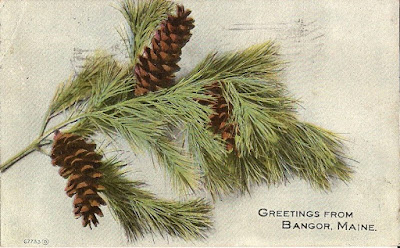 It is always a treat to see another post from you.
Thank you.
And how lovely to meet up with a blog friend. They become very dear to us don't they?

It sounds like a wonderful holiday and I'm so glad you could get away and spend time with your daughter and (when they were available!) the grands. I've only been to Maine once or twice but I've always been impressed by it. I've not been to the Bangor area or the park though. What a terrific holiday!

Thanks for taking me somewhere different!

I agree with everything EC said in her comment. Your posts are always a treat as well as an education. We have very little snow here, usually, but lately we have been setting rainfall records like crazy. As someone who is proud of her rain gear collection, I never thought I'd feel so bad about having too much of a good thing! Celebrating my birthday today, and as I read this I remembered a beer I had in my fridge, got up and am down enjoying this IPA! :-)

What an adventure! I'm glad you included the map. My memory of US geography is pretty bad!

Like the others, I consider it a treat to find a new post from you, Vagabonde. The photographs are wonderful, as usual.

Did you know that until 1820, when it became a state, Maine was a part of Massachusetts? It's true. I remember in some of Eugenia Price's historical novels (a Georgia author, if you're looking for one) that she referred to Bangor, Massachusetts.

Hi Vagabonde, Your daughter offered you quite the deal! Flying instead of the long drive. It took us 2+ days to drive from East Tennessee to Southern Maine a couple of years ago...but we didn't travel with any children in a van. We love Newport and nearby in southern Massachusetts for a year. We were there for a full winter...and saw lots of cold and snow! Great looking farm stay with all those critters. That would make my better half very happy indeed. We love Acadia National Park but haven't been there for several years now. Hope that all is well with you and yours and have a Merry Christmas! Take Care, Big Daddy Dave

Dear Vagabonde, I'm glad to read your blog again. How interesting you talk about the trip to Maine. Well done, you were not afraid to go because your sore legs are probably already well. How is your health? I like the photos. Your grandchildren are growing up so fast. I remember a photo of a little granddaughter, and she is already big.
It's good that the au pair helped you too.

Dear Vagabonde, I so enjoyed this posting. You, who are always so intrepid, sort of tip-toed into an adventure--for once! For a year--back in 1972-73--I taught in a colsidated public high school in Claremont, New Hampshire. I got to see some of Vermont and New Hampshire on the weekends and for my birthday two women with whom I'd become friends drove us to Boston. But I never got up to Maine.

Now I read a series by Paul Doiron about a game warden in Maine and I'd so like to visit the state and rent a cottage along the coast or even inland.

I lived that year in a farmhouse built in 1807. That year was also an adventure.

Happy Holidays. I hope you get to spend time with your extended family. Be good to yourself. Peace.

Glad you could visit Maine and shared your trip here. Reminded me of yers ago when one fall we drove up the east coast to enjoy the spectacular fall colors including to Maine, then a short distance into Canada. Nice you could visit with a blogger friend.

Your stay in Maine looks like a lot of fun. We were there this past summer as well, in August. We managed to stay in downtown Bar Harbor, which turned out to work well, though originally we would have liked a farmhouse like yours.

I hope you are enjoying the holidays.