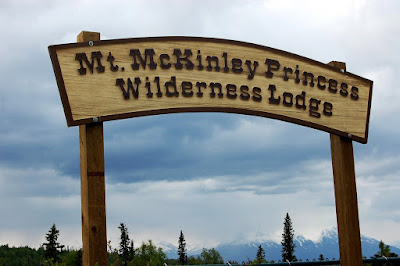 This is a continuation of our Alaska trip (see my post on Anchorage, June 26, 2009). We spent our first night at the Mount McKinley Princess Wilderness Lodge. It is located south of Denali State Park on the banks of the Chulitna River - about a 3 hour drive from Anchorage. It is supposed to have great views of Mt McKinley, but unfortunately the top of the mountain was shrouded in clouds when we were there (as it is a high percentage of the time.) Click on photos to enlarge them, 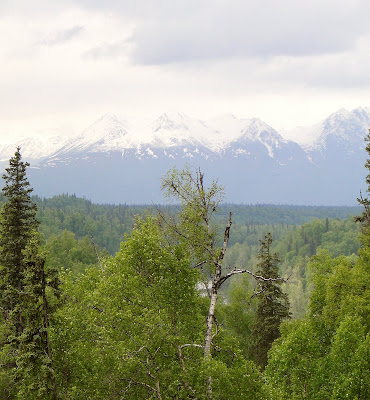 On the deck of the lodge there is a picture that shows what the view would look like from there on a clear day. 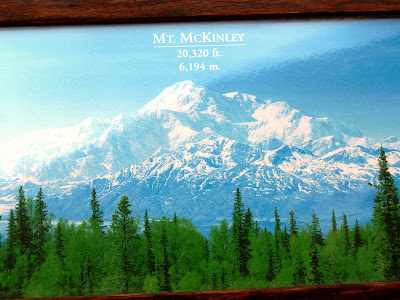 Next morning, we took the lodge shuttle to the small town of Talkeetna (pop. 800). Talkeetna is a base for domestic and international climbers challenging Denali (Mt McKinley.)

This historic village was originally an Athabascan Indian camp, then in the early 1900’s it became a supply hub for pioneers and trappers. When we arrived in town we wandered around and made friend with a local dog. 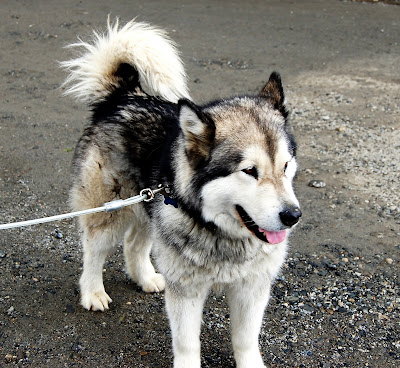 Talkeetnat is located on the confluence of three rivers, the Susitna, Chulitna and Talkeetna Rivers. We strolled through town to the river’s edge. There was no one around; the vista was immense with epic views of the rivers. We really felt like we had arrived in Alaska. 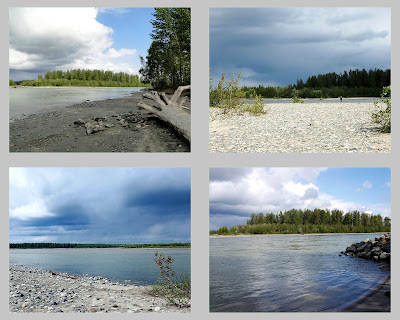 Lunch was at the old Roadhouse – a restaurant and lodge established circa 1917 - the oldest business on Main Street. It is a popular place with locals and climbers. A very sun-tanned climber from East Europe was eating close to us and recounting his climb on Mt McKinley. 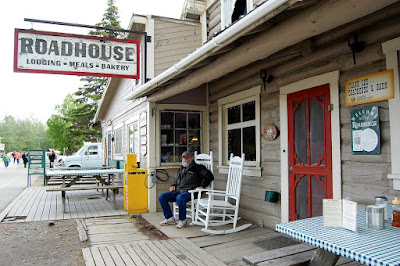 The food is homemade, home style and hearty. I had chili with their famous muffins and a piece of berry pie, complimented with some local Alaska ale. 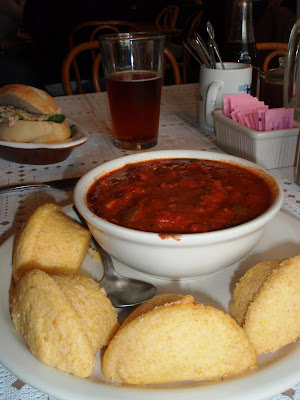 To celebrate the 50th anniversary of Alaskan statehood this year Talkeetna had a “most handsome moose” contest. Here are a few contestants – 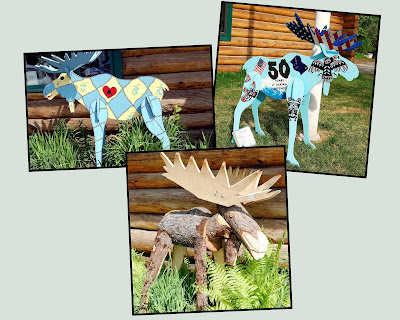 As an alternative to taking the motor coach back, we took the Three Rivers boat tour and leisurely cruised back to the lodge. This was the end of May and there were still large pieces of ice remaining on the banks from “breakup”. 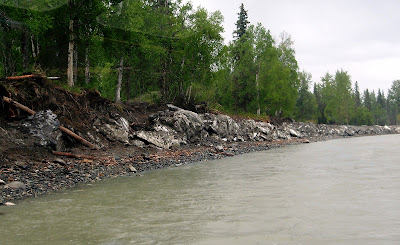 The rivers looks silvery gray because they carry large volumes of fine glacial silt – which is fine sediment produced by the glaciers as they continue to grind down the mountains. 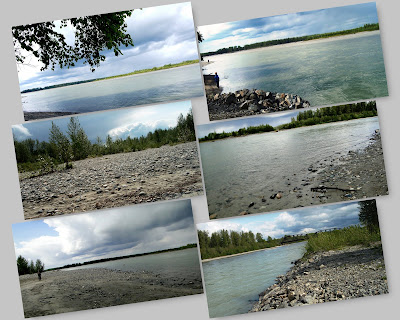 We stopped along the river and walked to an authentic trapper’s cabin. The interior floor of the cabin was about one foot below ground. 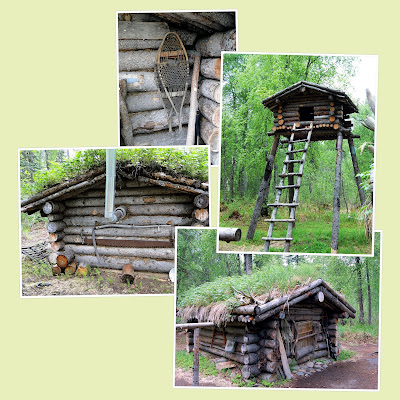 Several animal hides were displayed as examples of what the trappers commonly caught in this area. 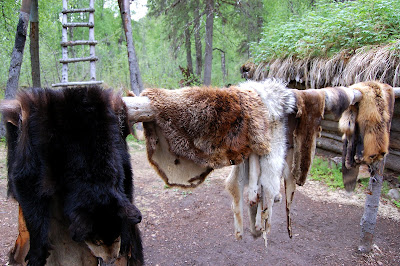 Along the way we saw some wildlife including a bald eagle perched on a log. 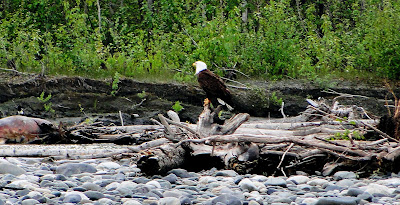 Then we disembarked under the bridge leading to the lodge and climbed back to the main road. 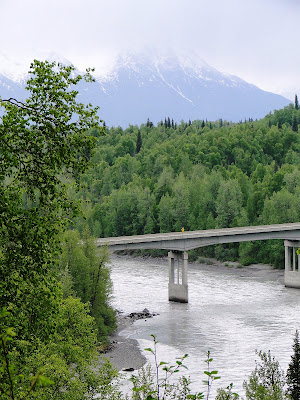 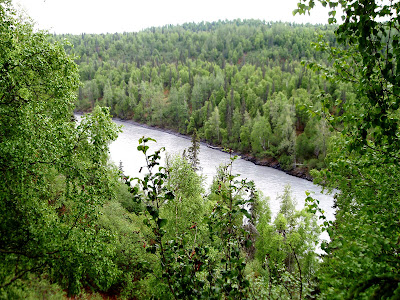 Here is a vintage postcard showing the flag of Alaska 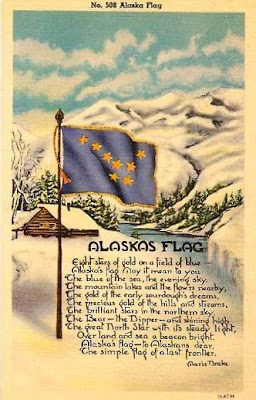 and the poem inscribed on it reads :

Eight stars of gold on a field of blue —
Alaska's flag. May it mean to you
The blue of the sea, the evening sky,
The mountain lakes, and the flow'rs nearby;
The gold of the early sourdough dreams,
The precious gold of the hills and streams;
The brilliant stars in the northern sky,
The "Bear" — the "Dipper" — and, shining high,
The great North Star with its steady light,
Over land and sea a beacon bright.
Alaska's flag — to Alaskans dear,
The simple flag of a last frontier.
-Marie Drake
at 7:30 AM

Now this is a place I'm gonna visit, for sure! Thanks for the wonderful tour. Now that I live in the Pacific Northwest, it's not that far away.

Again, VB, thanks for all the comments on my blog. I have to agree with Star-Crossed, though: traveling by yourself on a Greyhound was a huge adventure! Now that we are fortunate to have companions does not diminish what we did by ourselves.

Thanks for stopping by my blog and commenting! I use a Canon G9 for all my pictures but I use the macro setting frequently and will get lucky with my close ups at times:)

Looks like you do a lot of traveling! It will be fun visiting your travels...

What a magnificent country and what an adventure for you. I envy you your travels, I'm neither brave enough nor fit enough to travel such vast distances and do much hiking. Marvelous collections of pictures too.

I am looking forward to the next instalment!

Vagabonde, I never got your instructions on how to pre-date posts, could you please do it again. I am answering your last comment on my blog.

This is what I love about blogging. I just took a great tour of Alaska from the comfort of my home. Thanks for the great photos and the commentary.

This is a wonderful post and your photos are excellent! You've really done a good job of capturing the flavor of Alaska. I love your old postcards. The poem on the postcard here is set to music and is the state song of Alaska. You can hear it at www.anchorage.net.library/ACSAlaskaFlag.mp3. I wish you could have seen the fireweed blooming when you were at the park, but this last week there have been a lot of fires around the park, so I'm glad your trip was earlier.

What an awesome post! You did and saw so much when you were there. The pictures are fabulous!!

Woooooaaaah, the food looks gorgeous ! The pictures and the travel report are wonderful too. Thanks for sharing your adventures with us, with so much details and personal stories.
A bientôt!

Hello, intrepid traveller better than Dora! Your photos are beautiful, and make travelling easy from an armchair!
Thanks for visiting my blog today. I'd like to read some of your French poetry. Though I've never been to France, I love the language. I learned in school from the age of 6 to 18 - that included A level - and I can still read enough of it to make sense when I find snippets here and there. So how about it?! :)

What an interesting trip! I've enjoyed the whole sequence of beautiful pictures!
Have a nice week ahead! :-)

VB, Wow, what a fabulous trip! The scenery is breathtaking! And the food looks divine! Great pics, too!
Thanks for stopping by my blog. I stand corrected: the jalapeno cornbread recipe was the post Of May,6,09'!

What a beautiful account of your trip to Alaska. You've inspired me to dust off some of my photos of that trip. You're lucky you got to see Denali at all. It was playing hard-to-get with us; we didn't even get to see its feet.