Bears on the Cherokee Reservation 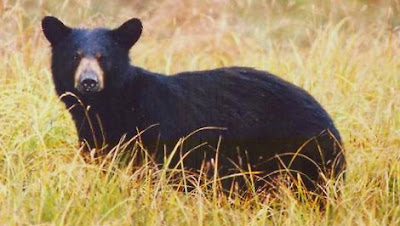 We are continuing with our stay at the Cherokee Indian Reservation in North Carolina. Please see my earlier posts listed on the right side of my blog under “Native Americans.” In my last two posts on this subject entitled “In and Around the Cherokee Indian Reservation” of 11 Sept-09 which followed “The Oconaluftee Mountain Farm Museum” of 13-Aug-2009 I related our visits to the farmstead and the Mingus Mill. The next morning we were ready for more adventures. It was a lovely morning, clear crisp and sunny. We could hear the soft sound of moving water near our motel and walked down closer to the riverfront. (click on pictures to enlarge them.) 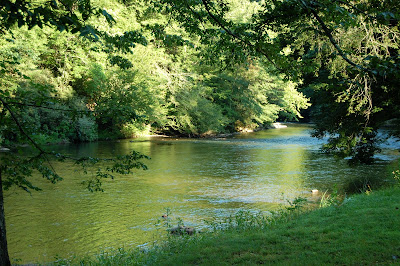 After leaving the river we were ready to go on our bear hunt. Below are two pages from the Cherokee guide book showing the bears and explaining the Cherokee Bear Project. Since the introduction text is quite small and may be too difficult to read here it is: “The idea for the Bears Project began in 2005, as (the town of) Cherokee wanted to showcase the variety of talented artists within the Qualla Boundary. Twenty-five artists were commissioned to individualize the bears and promote the visual expansion of downtown Cherokee .” A map was provided to find all the bears on the Reservation. Currently 15 bears are on view in and around downtown Cherokee. 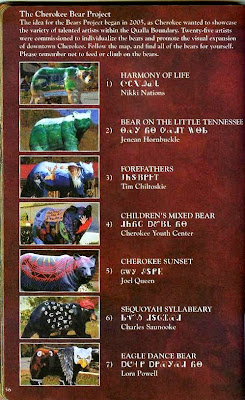 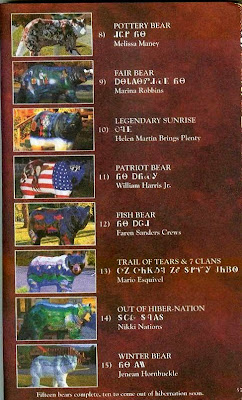 First came Legendary Sunrise by Helen Martin Brings Plenty to welcome us and get us started on our tracking of the Cherokee bears. 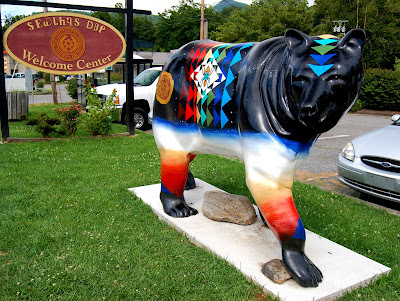 Below is Patriot Bear honoring the veterans of the Armed Forces. The artist is William Harris, Jr. 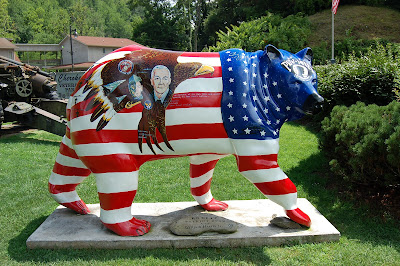 The bears are very large, life-like in fiberglass and painted by artists from the Eastern Band of Cherokee. This bear had just been put on display and did not have a title yet. 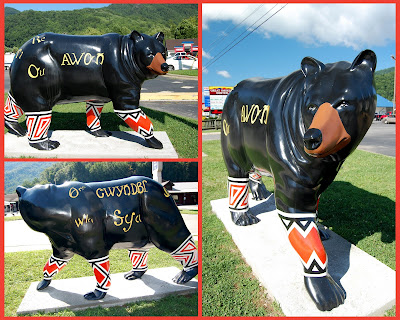 Now if I could read and understand the Cherokee language I might have been able to read the name of the bear above. Around 1809 Sequoyah, a Cherokee silversmith, started to work on the creation of a Cherokee alphabet. By the 1820s his alphabet was adopted by the Cherokee Nation. Sequoyah’s syllabary has a system of 86 characters and it introduced the Cherokee Nation to literacy. Sequoyah’s invention was used for printing a newspaper, in education, communication and religious publication. It was an enormous contribution to the systems of writing of the world. There is a very large sculpture of Sequoyah in the center of Cherokee – 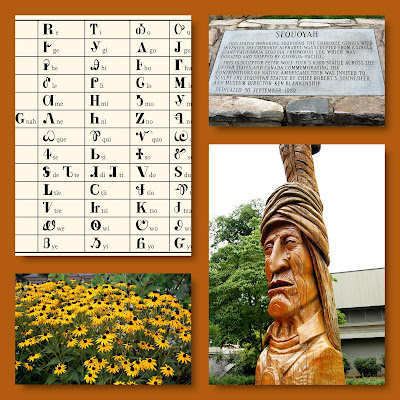 And a bear decorated by Charles Saunooke in his honor 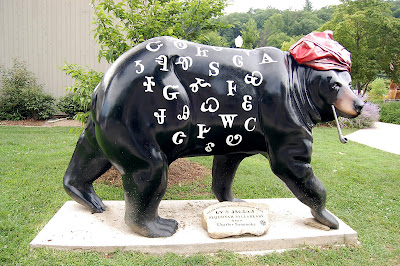 Here is another bear without a title and not in the guide book. I wonder what the symbols mean? I do like the frog on his “derrière” though – 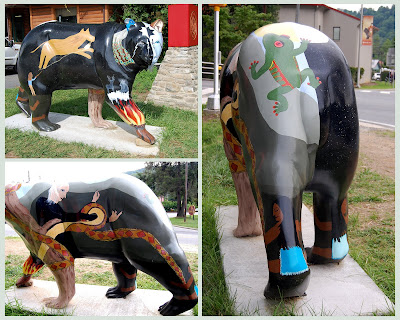 Below is “Harmony of Life” by Nikki Nations 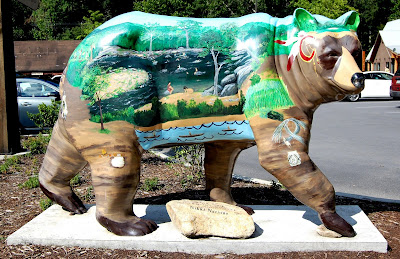 Our map shows that one bear was on the other side of the Oconalutfee River which runs through town. So we took a small wooden bridge to cross the river and we saw it by the bank. 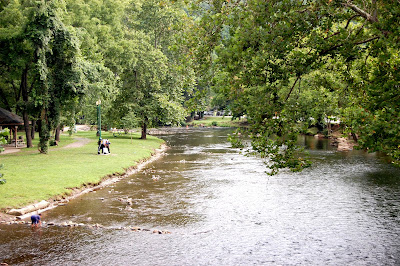 On the grass, close to a family of ducks, was the Fish Bear crafted by Faren Sanders Crew. 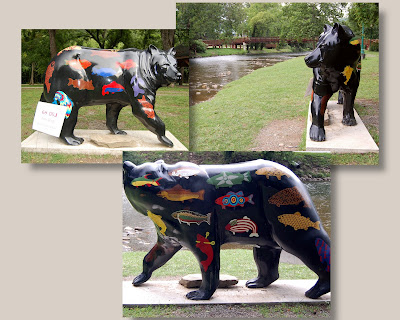 Don't forget to click on the pictures to enlarge them.

We stopped bear hunting for a while to rest along the river and observe the mama duck with her dozen ducklings. 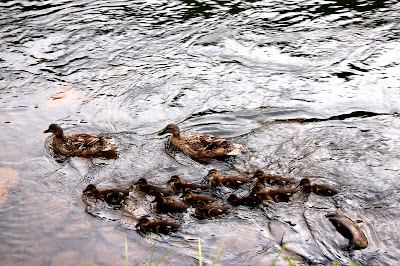 They were swimming towards the bank 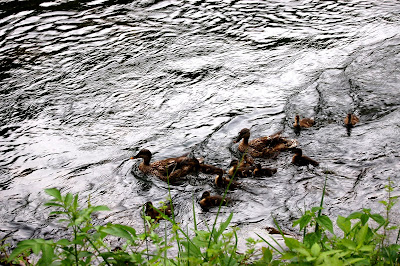 But should they cross the road, we knew they would be safe 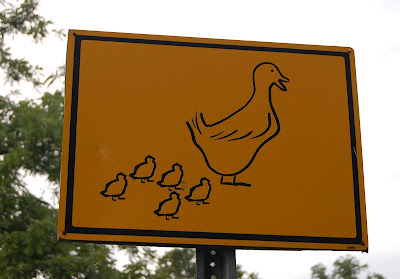 The Cherokee culture recognizes Seven Clan Spirits: Bird, Blue, Deer, Hair, Paint, Wild Potato and Wolf. It is believed that, many moons ago, an eighth clan was recognized, and that was the Bear Clan. Below is “Our Forefathers” bear decorated by Tim Chilttoskie. 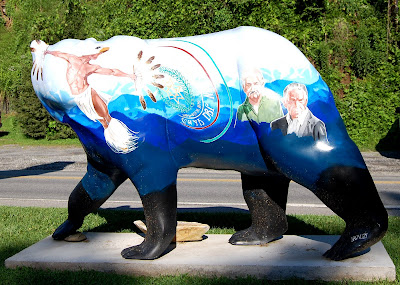 My husband especially liked Winter Bear, by Jenean Hornbuckle. From a distance it looks as if it were made of marble. But when you stand close to it you can distinguish a very fine winter landscape on its back, as if it were painted with a Chinese brush. Click on the pictures below to observe the winter scene. 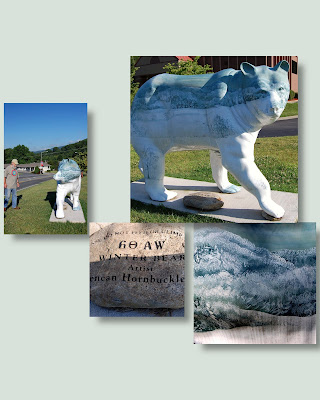 These bears do tell a story – a Tribal story. Here is Cherokee Sunset by Joel Queen. 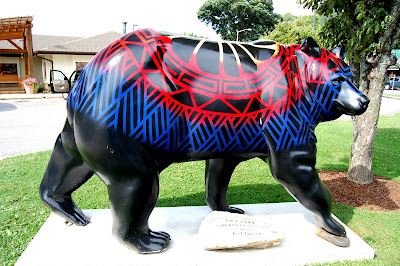 Although all the bears are the same size, each one is quite unique highlighting the individual artist’s vision. Below is Pottery Bear by Melissa Maney 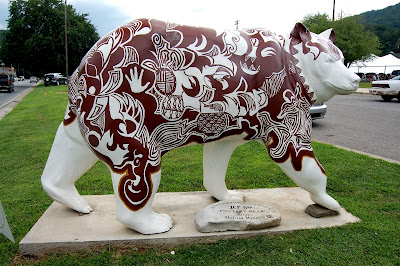 We kept seeing bears along the way 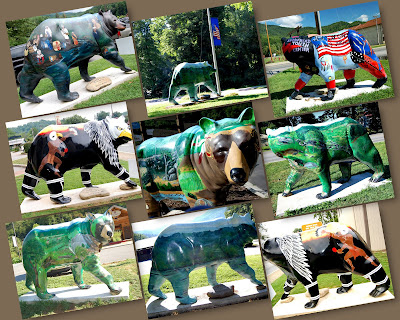 Bears, bears everywhere. We needed to slow down and let the bears hibernate. But instead here is one below called Out of Hiber-Nation by Nikki Nations. 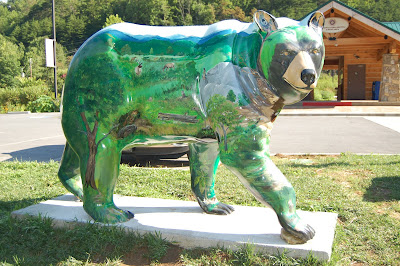 Well since Nikki plays with words, we’ll have to admit that we can’t “bear-ly” walk anymore and need a rest along the river. 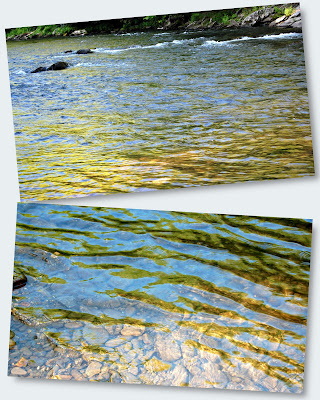 And say “goodbye” to the gentle bears… 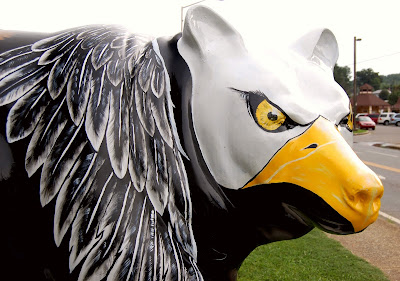 This post was scheduled to be published while I am away, but I’ll be back soon.
at 2:00 AM

Interesting though the bears may be, the photo of the real thing beats them all...

Would a wonderful trip to experience the real wild life - thanks for taking us with and for the well documenting photos too!

As a Norwegian, I love hiking in nature like this and we have a few brown bears.

What a wonderful bear-ful journey! I love them all, and especially did I love the duck crossing sign...

Your posts are filled with so much information, all of it interesting and well researched. Thank you for being my blogging friend. I'm lucky I found you!

just love the look of a bear..

I enjoyed my tour with you! There is a big gathering of the SE tribes going on in Cherokee right now -- I wonder if you are there for it? I was there last year for a day and had a wonderful time watching the dancing and the stickball game.

The bears are really fun. I think I like the hibernation bear best.

Very interesting indeed, Vagabonde. I admire the way you delve into your subjects and explore them exhaustively.

Did you learn what is the symbolism behind creating these bears?

Thank you and see you soon.

Bonjour Vagabonde, Such a fascinating and fun post! Loved the photos especially of the river and the bears. You live in such an interesting area, with so much to explore. Beautiful post! Cheers, cher!

The bears are quite delightful! And you have such good pictures to illustrate all the various artists impressions.
Toronto did a similar thing a few years ago, but not bears, our animal of choice was moose!

Just spent some time 'travelling with you' and thoroughly enjoying your writing and photos. The painted bears are delightful. That meal looks very much like the English favourite 'beans on toast'!

Beautiful,Fantastic and lovely shots !! This is so lovely place !! I Would love to visit this place some time..Unseen Rajasthan

What a great project. We did something similar with of all things . . cows . . last summer. They were dotted all over the state during the Sydney Festival, each unique and each painted beautifully.

thank you for the beautiful reportage, photos, victorian vignettes... love the designs of the artists on the bears!

Thank you for sharing these bearcursion with us!
You have such a wonderful way with words and a very sweet sense of humor.