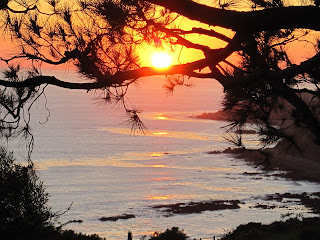 We flew to California to celebrate Thanksgiving withfamily. We were in Long Beach only 5days, but we packed many activities intothis short time. Before we left we boardedour cats Cody and Mitsou at the veterinarian even though they would have lovedto come with us. (Click on pictures to enlarge.) 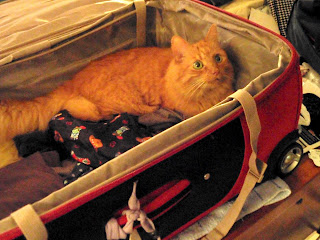 Another cat was waiting for us when we arrived. 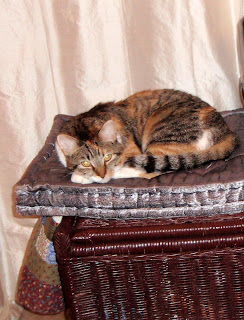 Ten people, three children and a baby were going to be atthe Thanksgiving meal, but it seemed that we prepared enough food for thirtyfive at least. We did buy the pies at alocal bakery where they offered a good variety – including mince pie, my favorite, which isvery difficult to find in Atlanta. 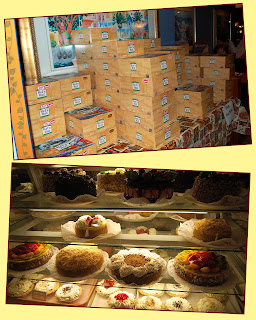 The menu included many of our family’s favorite dishes. 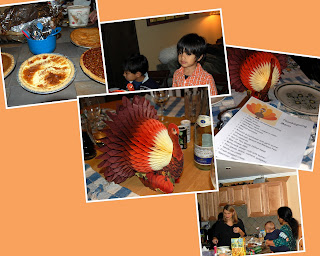 We were pleased to see our three grandsons, including the 4 ½months baby who keeps growing. 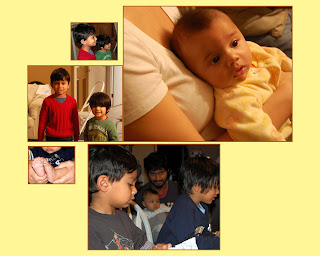 The eldest grandson’s 5th birthday was alsocelebrated that week. The cake wasdelicious. 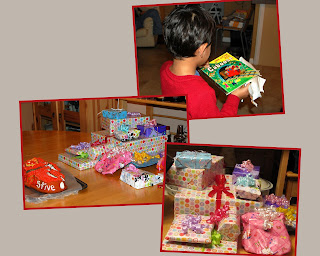 On the deck, a visiting squirrel wanted to come inside toget a piece of cake I think. 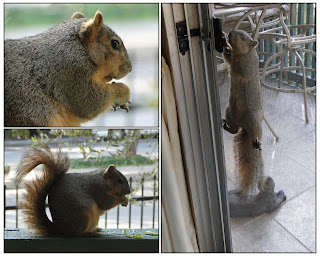 On Friday afternoon – what is called Black Friday by thestores; they offer big sales and huge crowds go shopping – we did not goshopping – we drove for about 30 minutes to Rancho Palos Verdes along thePacific Ocean. My youngest daughterwould have liked to be married in the chapel there, the Wayfarers Chapel, butit only held 100 people, so she was married in Savannah, Georgia. TheChapel was built in 1951. At the time itstood alone on an almost deserted cliff overlooking the Pacific. Now trees, flowers and shrubs are surroundingthe Chapel. 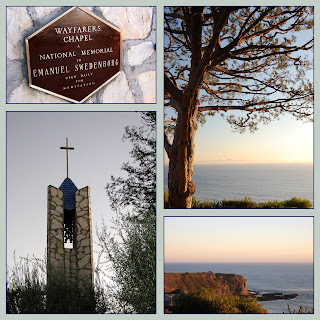 The architect, Lloyd Wright, son of the famous Frank LloydWright, was inspired by the majestic California Redwood trees. He wished to create a “tree-chapel” - redwoodpillars were used in the Chapel and coastal redwood branches can be seenthrough the glass walls from anywhere inside the Chapel. The glass walls offer protection from theelements but also create a sense of outer and inner space. Nature and architecture unite to create anatural sanctuary. 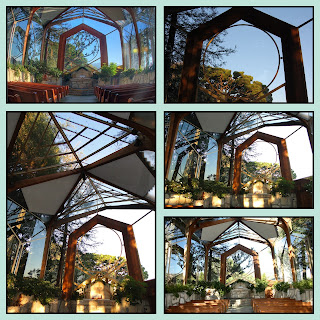 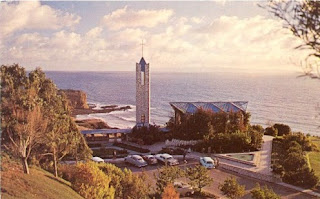 This Chapel is part of the Swedenborgian Church of NorthAmerica. It serves as a memorial to itsfounder, Emanuel Swedenborg, born in Stockholm, Sweden (1688-1772.) Swedenborg was a scientist turned mystic. Hewrote anonymously articulating a new understanding of Christianity. His writings promoted a Church based on loveand charity rather than multiple churches named after their founders based onbelief or doctrine. His ideas were endorsed by AmericanTranscendentalist thinkers like Ralph Waldo Emerson, Henry James, Sr., andEnglish Romanticists such as William Blake, Elizabeth Barrett Browning, ThomasCarlyle, etc. More modern adherents wereHelen Keller, J. L. Borges and William Butler Yeats. The well-known Zen author D. T. Suzuki wrotea book called “Swedenborg: Buddha of theNorth” (which I have had in my library for quite a while – but have not readyet…) 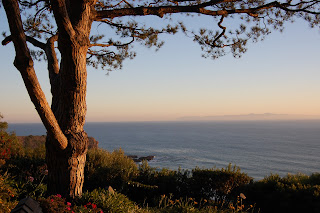 My husband and I were married in the Swedenborgian Church ofSan Francisco in 1967. It is a lovelysmall church and the only one in San Francisco designated a National HistoricLandmark. It was built in 1895 withnatural materials by an elite group of early California pioneers including thenaturalist John Muir. This churchallowed non-members of the Swedenborgian religion to be married there. We took our wedding pictures in theirgardens. The gardens of the WayfarersChapel are also enchanting. There is a reflectingpool in front of the garden and next to it an apple tree dedicated to JohnnyAppleseed. John Chapman (1774-1845) wascalled Johnny Appleseed because he introducedapple trees to large parts of the Midwest. He was also a missionary for the Swedenborgian Church. 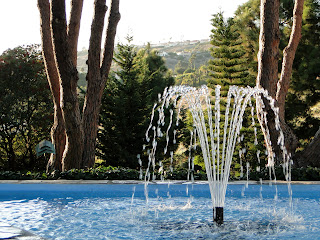 We visited the Chapel in the afternoon and decided to stayuntil sunset. We walked along the gardenwhich is beautifully maintained. In2004, Eric Lloyd Wright, son of the architect, created a Landscape Plan whichwas adopted to guide future botanic development. 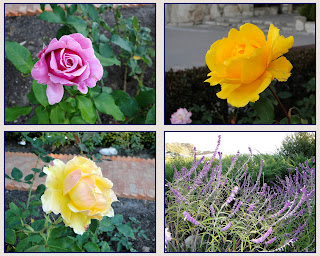 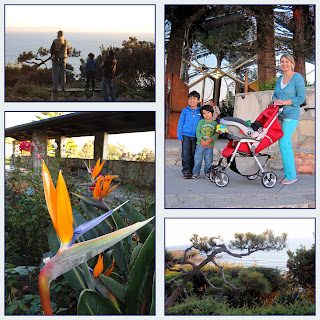 As we waited for the sun to come down we admired theoutstanding view and the outline of Santa Catalina Island in the distance. 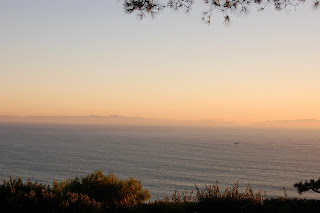 The view towards the hills was also impressive. 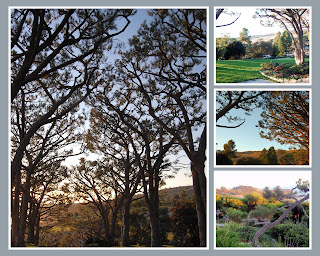 The sun was going down quickly creating golden shadows. 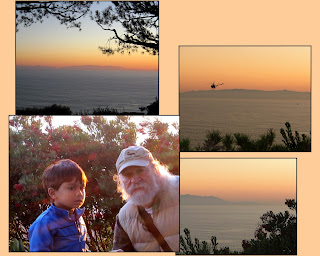 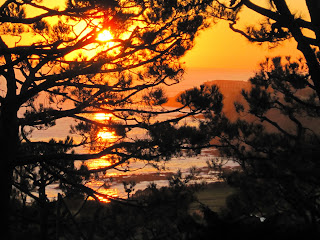 so I hurried closer to the cliff to see better. 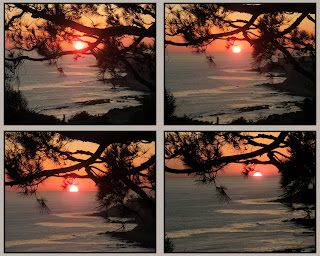 I purchased the little Self-Guiding Walk guide. In the back is this poem –
Pausefor a moment, Wayfarer,
on life’sjourney,
Let thebeauty of holiness
restoreyour soul.
May theharmony of sky
and water,leaf and rock,
Nourishthe creation and growth
of yourinner being
As yourfare through this life
and oninto the life beyond. 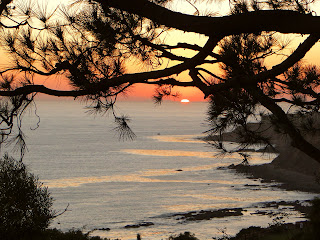 Your grandsons are so beautiful! I too have 3 grandsons and miss them terribly as they live in Korea :-(

The photos are just mesmerizing and the church is wonderful -- just love it and can understand why your youngest daughter had hoped to get married there ...

What a heavenly post!
Used to visit and contemplate at Bryn Athyn Cathedral . . .

So very BEAUTIFUL----I was pointing out Palos Verdes and Catalina to someone today---I can see Catalina quite clearly on many days, from the windows of my Living Room....!
That is such a BEAUTIFUL Church....I've always heard about it, but, did not know anything about it's History. As always, you teach me so much about places I have lived near for over 50 years!
Quite Amazing....! That Sunset was so incredibly stunning! Thank You for that and for all the lovely pictures of The Watfarer's Church....

As usual, I love all the pictures. Of course, the one of Jem is my favorite!

What beautiful grandchildren. I love the picture of the little feet, and a menu for Thanksgiving! As usual, I learned much from your post. I had never heard of the Swedenborgian Church and now want to know more. What a wonderful post, VB.

The squirel trying to get in, is that for real?

I had shown the Wayfarers Chapel to my son and his fiancee a number of months ago when they became engaged..I think it is beautiful!!
Looks like you had a great time! your grandchildren are precious!!
thanks for sharing!

A most beautiful post! Your photos captured well the specialness of the Wayfarers Chapel, the beauty of the area and the lovely sunset through the trees!!! You have very handsome grandsons, they look just as sweet as those desserts at the bakery!

We have a very good friend who lives in Rancho Palos Verdes, and my mom lived nearby in Torrance. It is a beautiful area-no airconditioning needed even in the hot summers, and wonderful gardens with spectacular flowers. Lovely photos, Vagabond.

Vagabonde, once again you have taken us along to a marvelous place, a place made even more beautiful by your words, associations and those photos.

Beautiful! Thank you for sharing your travels views! Kisses and hugs to both of you.

That last photo was well worth waiting for. What a wonderful golden light. Your family are delightful - what a happy Thanksgiving you must have had.
The trouble is your posts are so generous - beautiful and educational one ends up gushing - like a fountain:)

I've seen a lot of beautiful pictures of CA before, but nothing as intimate as seen through your lenses. The view out towards the Santa Catalina Island is breathtaking and the Wayfarer's Chapel is beautiful... like carving out of Redwood trees. I know little about FLW's son's architectural designs. Thanks for sharing with us this wonderful piece of family journaling... I'm sure an experience much more rewarding than shopping on Black Friday.

I hadn't heard of the Swedenbourg church. I must look out for further information. Beautiful pictures as always. California must be really beautiful.

A lovely post! And your sunset pictures are gorgeous!

What a glorious holiday and beautiful post! And such a lovely spot to be! Is Cody your golden boy? I can't resist an orange cat! I think your sunsets are all the lovelier (and balanced as composition in having that tree frame them! It looks perfect in every way!

wow i didn't know you have asians in your family tree! what a little united nations! ;) your grandsons are so cute. how blessed you are! :D

i didn't know wright's son is an architect too. guess his fame is overshadowed by his dad's!

You know that California is my second state, Vagabonde! After growing up in Michigan, I spent 12 years in San Diego (where my 2 kids were born) and Pasadena...before moving to Wisconsin (4 years) and then Georgia (25 years). I LOVE your gorgeous images here, farther north from where I used to live. I know you're glad for this family time away from the South!

Vagabonde,
Especially a series of photos of sunset is exquisite! Is the tree a pine？I wonder why we can see the movement of the sun only in sunset? I feel as if it accelerated the speed at that time.
In a high school English textbook, I have read the story about Johnny Appleseed. While travelling, he seeded apple. It was a very impressive and great story.
Best wishes,
keiko

Hi, I just stumbled upon your blog whilst googling 'vintage French postcards' and am now all teary eyed after reading your story about Gilbert and 'the kiss'....so lovely :)

Your grandsons are adorable. Thank you for the post. That's a perfect way of having a perfect holiday.

Wow, those photos are just exquisite and that church is truly beautiful. I love the redwood structure - it gives the impression of being one with nature.