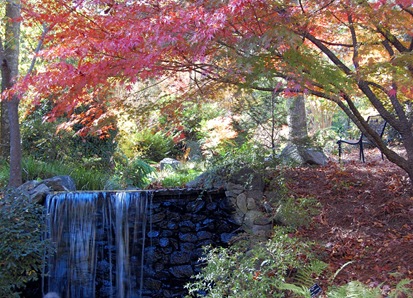 Last August we visited a garden not far from our home called the Smith-Gilbert Gardens and I wrote several posts about it, please click here to read part 1. It is a small garden but there was so much to admire that I wrote 3 posts on it. Last week since the weather was so nice and the foliage vibrant we decided to return to the gardens to see them under the autumn colors – we were not disappointed. It was a magnificent display. It is hard to believe that we were the only ones in this garden. Below is the Japanese garden area. (Click on collage to enlarge.) 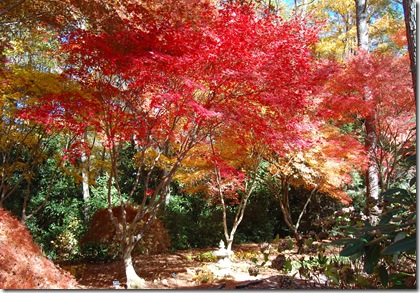 There were so many rich hues of colors that I kept taking pictures with my 3 cameras. I took about 332 photos – now it will be difficult to decide which ones to show. Looking down to the dried Hosta then up to the top of the trees was like an overload of brilliant colors – from pure gold to brilliant orange, saffron, Chinese Lacquer red, alizarin crimson, faded plum and still some greens to shades of browns – a kaleidoscope of colors. 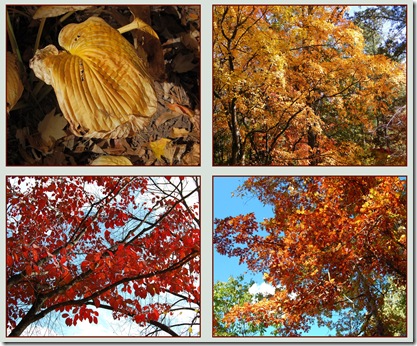 I remember my grandfather saying that when he had to babysit me when I was a child he would walk to the lavender fields and let me wander there – I could stay in there for hours never crying. I guess I kept this interest in the colors and scent of nature – I could have been staying in the garden all day looking at the fiery glow of autumn there and delighting in the scent of the drying leaves. There were some flowers too but since some were close to bee hives I did not get too close. 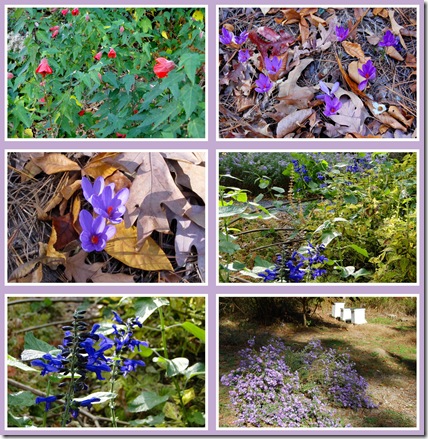 The various hollies would look good on Christmas cards. I had not seen the pale yellow berries of the Chinese Holly (Ilex Cornuta d’Or)– they would be striking in a dry flower arrangement. 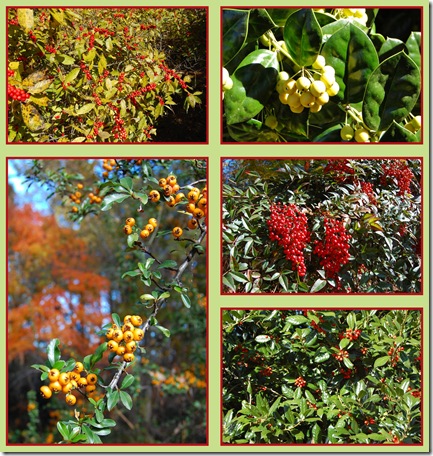 I just went to take a look at the pictures on the posts I published last August on these gardens – everything was so green. Just take a quick look back there – it is such a difference now. I just could not stop admiring all the myriad shapes of the leaves, such as on the Jack Tree below. 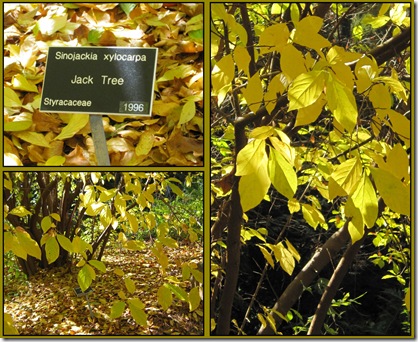 What about this Lace Leaf Japanese Maple? So delicate - Isn’t it a beauty? 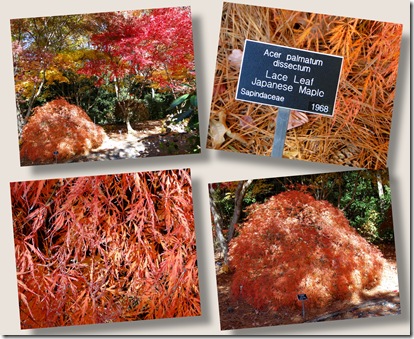 J’etais inlassable – in English – I was tireless – could not stop looking at all these gorgeous exhibits of nature. But while I was jumping from tree to shrub to flower to sculpture my husband was patiently waiting and looking at the sky. 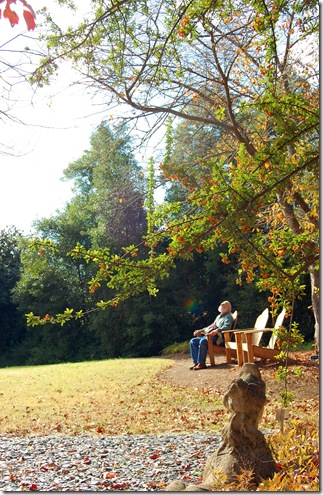 Looking up myself I realized he was watching a low flying airplane. 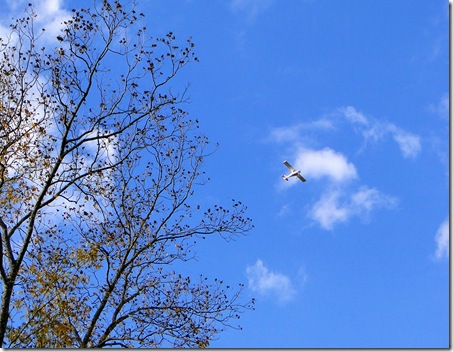 I went to see if the roses were still blooming – they were. 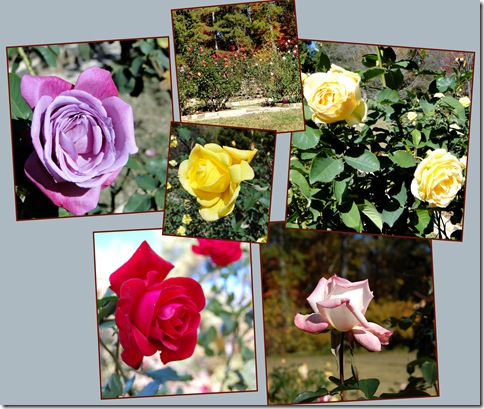 One rose had a delicate scent and a lovely butter cream color with a dash of pale pink on the outer petals. It was called Julia Child – a perfect rose for Julia. 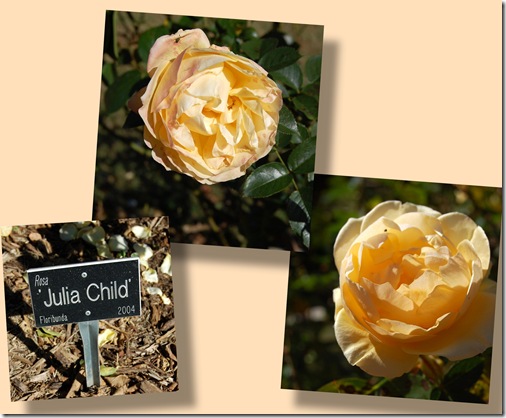 Close by was a sculpture I had not noticed last time I was in the gardens. It was a metal and granite piece by John Van Alstine, American, born in upstate New York in 1952. 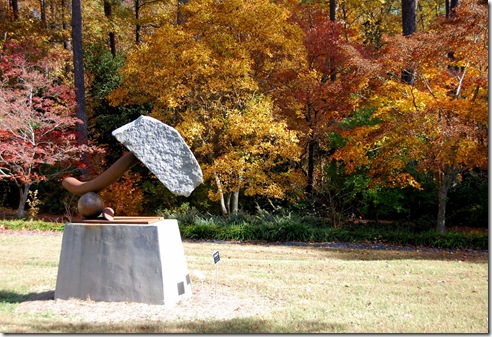 The Parsley Hawthorn which in August had a vivid green color was turning gold and produced petite crimson berries. 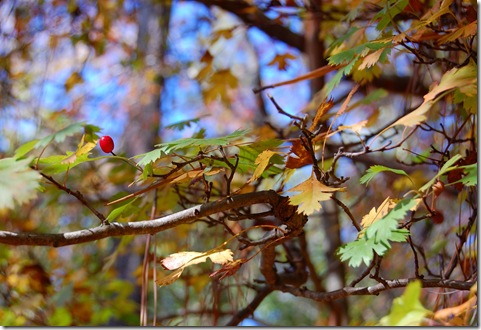 Looking down there were some interesting foliage 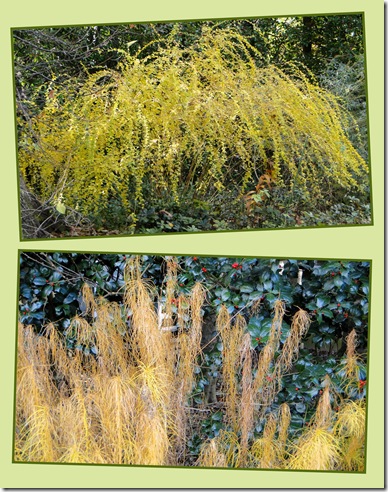 and looking up I could see some trees with branches with interesting shapes as well. 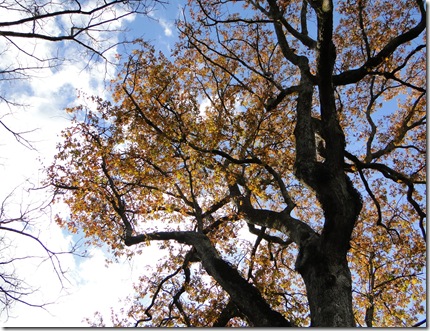 In the distance I could distinguish some color – this was the camellia garden. I had not seen the camellias last august as most blooms come in the fall. Many cultivars of camellias were giving the right burst of color among all the gold. From single-to double flowers with rounded shiny green leaves they invigorated the pathways. Some were pale pink 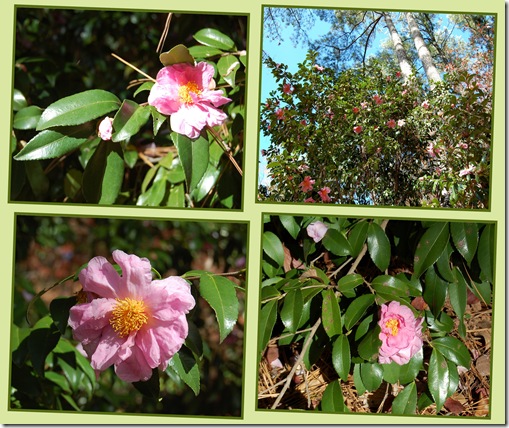 some had a pink color, which we would say in French “plus soutenue” maybe I could say a bolder pink… 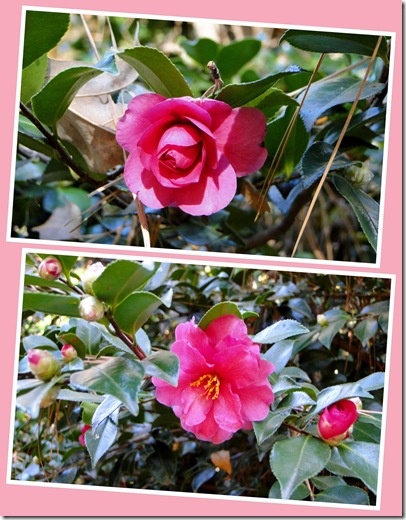 then some had the pink turning toward the mauve 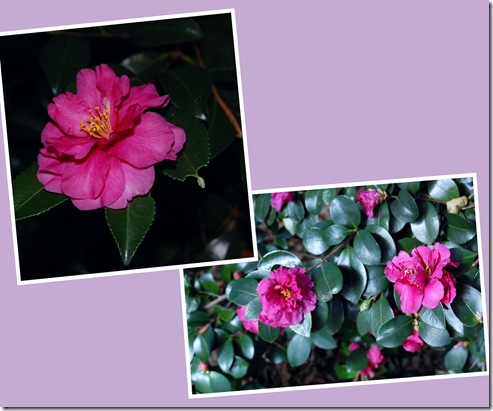 Then I came upon a camellia bush which was covered with a multitude of white blooms. It seems that hundreds of cottons balls had been dispersed on it – the petals were overlapping – the blooms were spectacular. 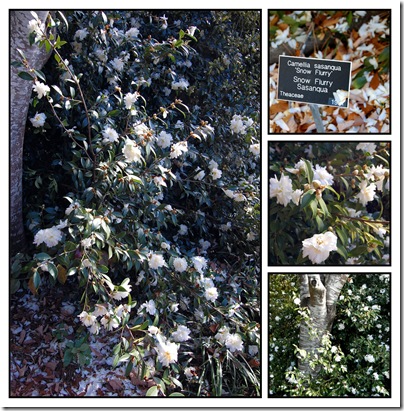 Further on was another white camellia, but this one had single petals – fresh and dainty. 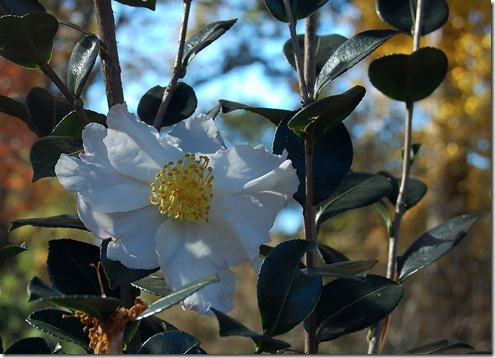 I had spent a long time going from camellia bush to camellia bush and needed to find my husband. I found him by the pond behind the waterfall – meditating or looking at a frog maybe. 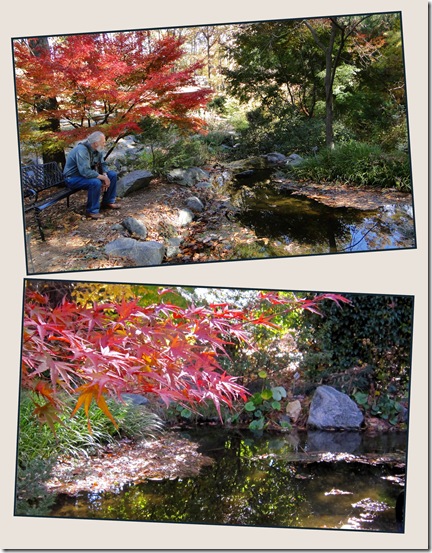 Not to disturb him I walked away toward the little waterfall. There I was bedazzled by the enchanting waterfall surrounded by amazing colorful trees. I took many pictures from the side of the fall 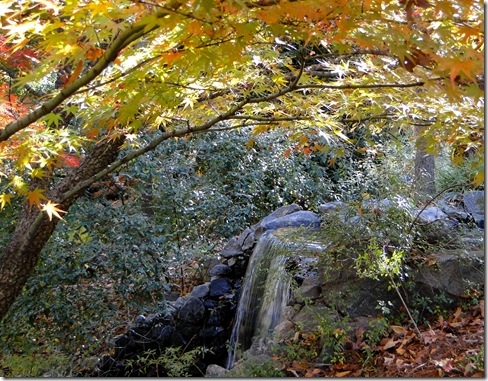 then facing the fall. 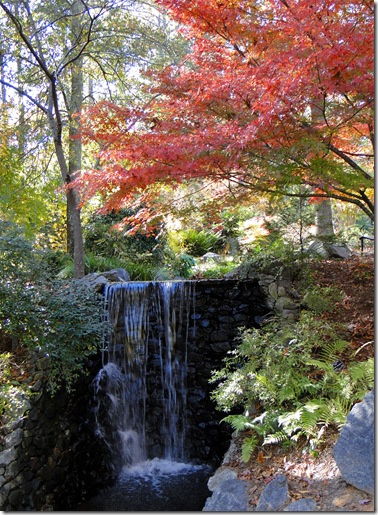 Walking by the bonsai garden I was surprised to see that their leaves were no longer green – they are trees after all, not house plants. 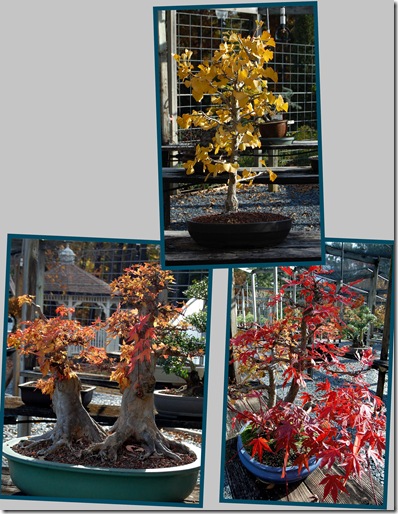 After passing the fast moving koi 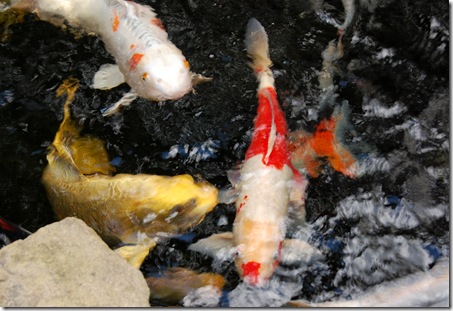 I thought I would see the dog on the porch, like last time, but no – the dog was gone and in its place was … a rabbit! 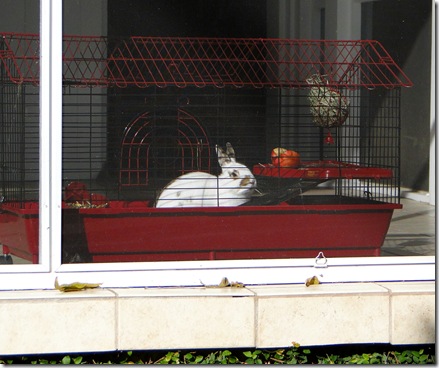 It was time to go to the picnic area to have a look at the Chinese Parasol tree I photographed last August. I found it - its leaves were now a shade between a sunglow and light tan. 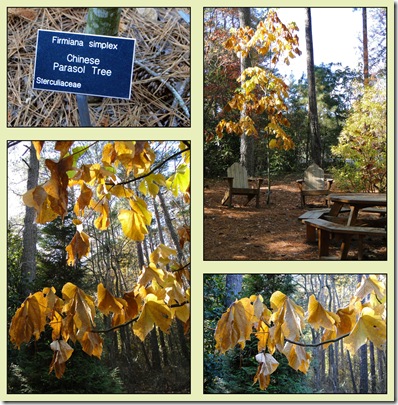 And there by a picnic table was my husband with a Thermos of strong black coffee – just the thing to end this enchanting promenade in the Smith Gilbert Gardens.
o-o-o-o-o-o-o-o-o-o-o-o-o
I wish you all a Happy Thanksgiving – here is a vintage postcard from my collection. In the back it says “from Vera to Grandma – 1911” 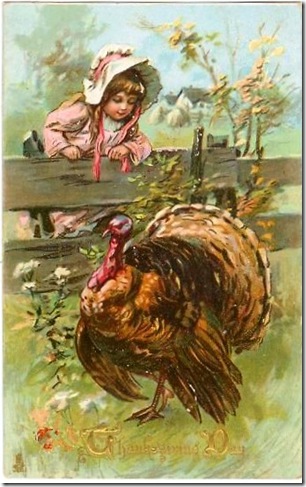 Thank you for that wonderful visit, again! I re-visited your August blogs about this beautiful place. I love the Firmiana simplex but it would have troubles to grow in our cold winters. It must be very mild there as the true autumn colors are still on show. Merveilleux, merci!

It really makes me think of Japanese gardens.

What a unique idea of your grandfather to let you walk around in the lavender fields as a child. Yes, I bet he had an influence on your love of flowers and colors and nature, and of walking around aimlessly, just admiring. What a priceless gift!
All your pictures are amazing, also the ones of your patient husband. Blessings on him!

These colors are simply stunning, even more beautiful than in summer. I cannot believe you were the only people in this lovely place! I do hope you all have a wonderful and satisfying Thanksgiving. Peace.

just beautiful!
thanks!!
hope you are having a wonderful time..Happy Thanksgiving!

Happy Thanksgiving, Vagabonde, and many thanks for the wonderful pictures and commentary of this magnificent garden.

Oh My God! This is all so very Beautiful!!! One after another of GORGEOUS Colors and trees that are in Full Fall Bloom....!
Growing up in Great Neck, we had a BEAUTIFUL Japanese Maple on our property..(I wonder if it is still there?)....It is such an elegant delicate stunning looking tree....!

Thank You, My Dear, for ALL these incredibly lucious pictures....
And,
A VERY HAPPY THANKSGIVING To You And Yoyrs...!

Full of colors and treasures!
So much to be thankful for. That's all what Thanksgiving is about: family, friends, giving thanks and sharing.

What a feast for the eyes.
I too would be nervous of getting too close to the bee hives and they zoom by at terrific speed when they are returning home.
In my own garden I expect them to respect me as the kind person who provides blooms for them to sample. The arrangement seems to work:)

HAPPY HAPPY THANKSGIVING TO YOU!

Beautiful autumn leaves and awesome blooms - we Southeast Asians can only imagine what it's like to be in the middle of red and orange foliage!

Floratechnics might be the term to describe these beautiful pictures, Vagabonde. You are most fortunate to have such a dazzling array of herbaceous beauty so close at hand.

The turkey looks apprehensive. Vera looks determined and I think the turkey was rather hoping it might get to live until Christmas and not be despatched prematurely for the sake of a damp Thursday in November. Grandmother had promisted as much and the turkey had grown its tail specially. Couldn't we make do with just the pumpkin pie and leave the beasties in peace?

Anyway Happy Thanksgiving to you with or without a feathered friend.

Vagabonde, I think that this garden is equally beautiful in its autumn colors. It is truly an exceptional place!

My favorites are those Japanese maples.

I do love hearing about your grandfather and you and the lavender fields. The picture that comes to my mind is rather blissful.

I wish you and your husband a very Happy Thanksgiving! xo

Thank you for taking us along. Beautiful pictures, I felt like I was there. Hope you have a Happy Thanksgiving..Susie

What wonderful color! I especially love the waterfall pictures!

bounty!
and I love the word 'etrr` acte"

A few days late, maybe, but HAPPY THANKSGIVING to you anyway, Vagabonde. I hope you had a great day of celebration.

What a fabulous turkey at the end of your post...and what a delight to see this garden during its autumnal dance. Thanks for going back.

When I see a beautiful post like yours, I wish that my flower-loving, dedicated gardener mother was still living. Much as I like it, she would have loved it more. The photos are great and the Thanksgiving postcard is the sprinkles on the top!

To all my friends above - I appreciate very much that you took the time to read my post while I was away. I hope that, for those celebrating it, you had a nice Thanksgiving. I’ll try coming to your blogs as I am able to considering all the activities and trips scheduled it may take a while. Thanks again for commenting.

Oh, it's beautiful! We are under a mantle of white right now. Lovely, but cold, and I miss our beautiful colors! I'm so glad you had a lovely Thanksgiving!