The Smith-Gilbert Gardens in the spring 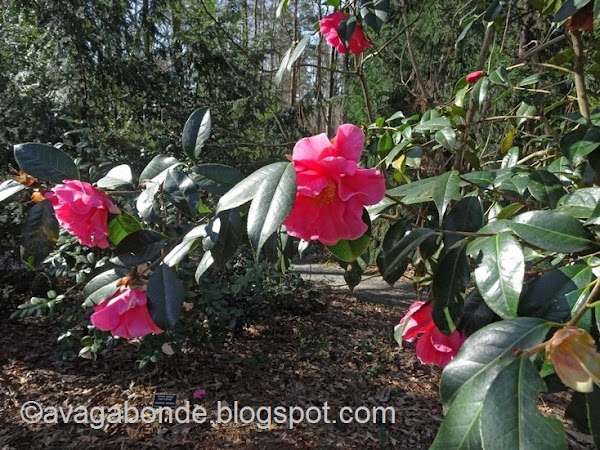 Last Tuesday, March 16, 2021, I drove to the Georgia house. On Wednesday I drove to the accountant in Woodstock, GA., in Cherokee County, north of my house, and gave her all my receipts to prepare my income taxes. The next day I read the filing date had been moved to May 17 instead of April 15. At least I won't be late. Then I went back to clearing out the study that I had started last month. There were 4 large cartons on top of each other I had been reluctant (or afraid) to check. As I thought, they contained old magazines, bills, receipts, letters, children drawings and so forth. I started placing the magazines in recycling bags but then realized that some were quite old. The library told me they are not accepting donations at this time and Goodwill does not take magazines. 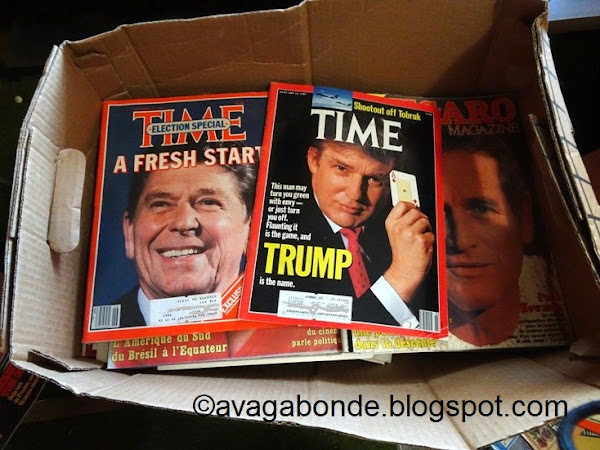 When I saw the two magazines above I thought to check on eBay to find a price - the 1989 Time magazine Trump issue is selling up to $55 and the Ronald Reagan November 17, 1980 up to $25. I guess I'll keep them. There was also an August 1981 issue of the French magazine Paris Match featuring Princess Diana on her honeymoon. In the magazine I had placed 3 postcards of her 29 July 1981 wedding to Prince Charles. I remember I had flown to Paris to visit my mother that summer and stopped first in London for several days - where I picked up the postcards. 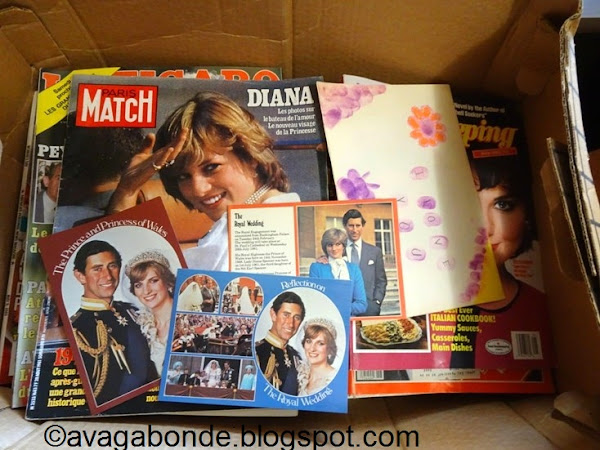 In two days I was able to fill 10 large plastic bags as I did throw away a large number of magazines and assorted papers. It felt liberating to bring them to the high school recycling bin. 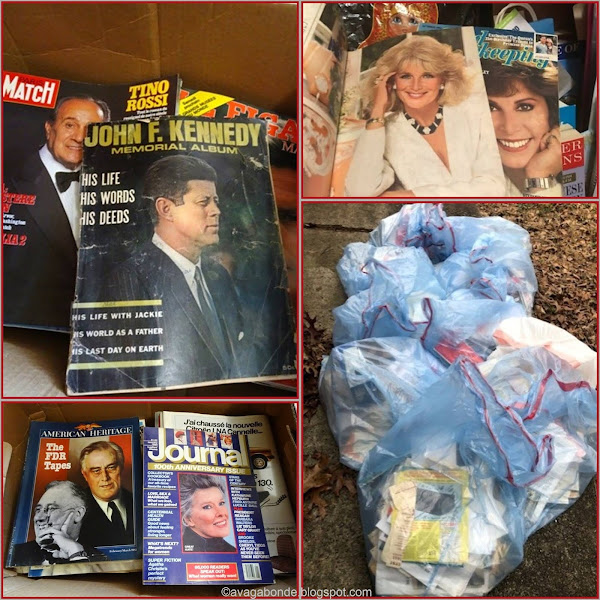 Yesterday morning, March 20, 2021, was a bit cool and windy but very sunny, a good day for the start of spring. After going through all these old cartons and dust of ages getting some fresh air sounded quite enticing. I remembered the Smith-Gilbert Gardens my late husband and I visited often in the past. In 2011 I had found out that these gardens were only 4.5 miles from our house. I wrote 6 blog posts on them. You may like to read the history of the gardens in my first post dated August 31, 2011, "A Secret Garden in Cobb County, GA, part 1." I showed more of the gardens in part 2 and part 3. Subsequent posts were written to show the gardens in summer "End of Summer at the Smith-Gilbert Gardens" in the fall "Return to Smith-Gilbert Gardens" and finally "Smith-Gilbert Gardens in Winter." I had not written a post for spring and needed to remedy that. I arrived at the gardens before 10 am on Saturday. Unfortunately I had left my good Nikon and Canon cameras in Nashville, but still had my pocket camera and cell phone. 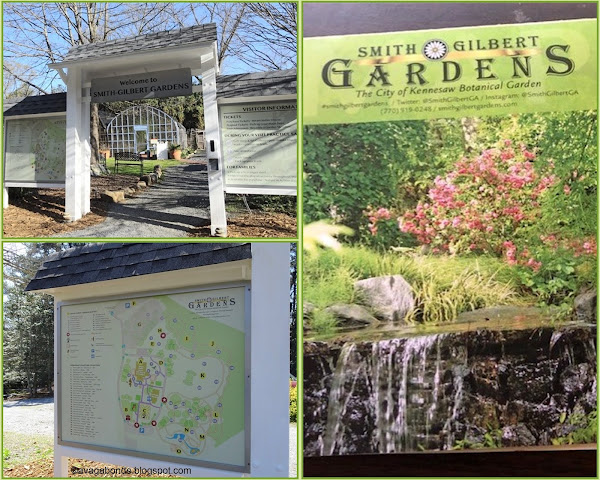 Being the first day of spring I was not sure there would be many blooms to see. But daffodils were plentiful. (Click on collage to enlarge.) 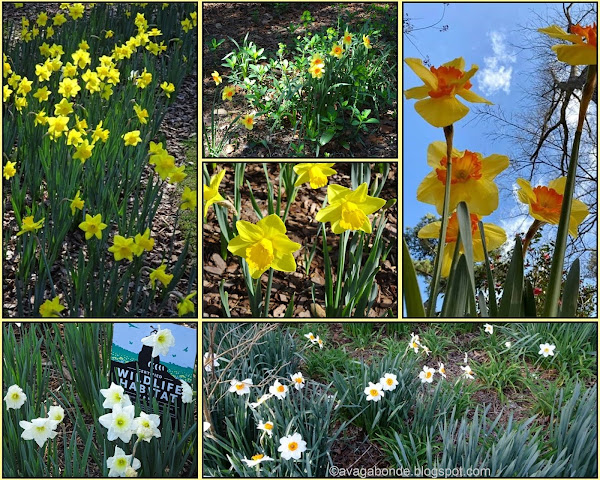 I had forgotten how many sculptures were placed among the plants and paths. The "untitled" sphere by Grace Knowlton (American 1932-2020) looked happy surrounded by a brilliant carpet of daffodils. 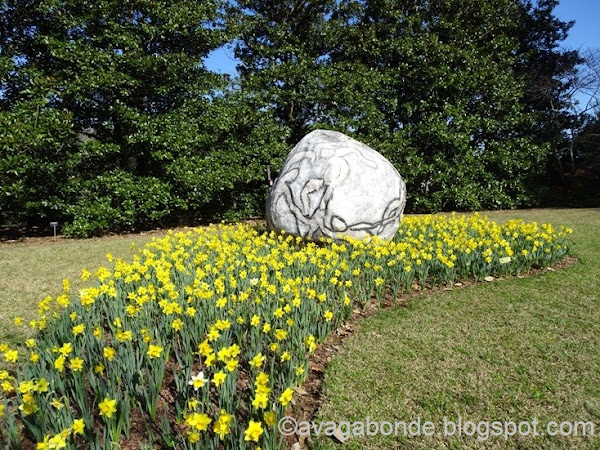 There were only two other visitors - two young ladies in their spring outfits taking photographs of themselves. 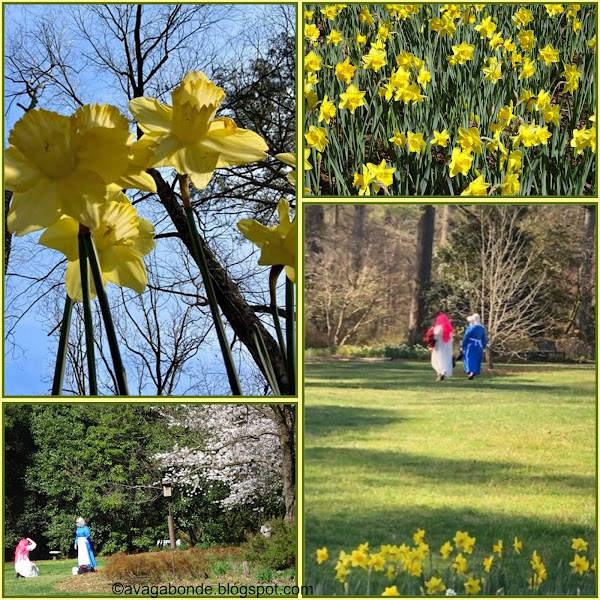 It had been at least five years since I visited the gardens and noticed some changes. The wood benches had been replaced by metal benches. There was now a small children play area. The rock garden had grown and grey pebbles/stones had been placed on pathways - making it a bit difficult to walk. 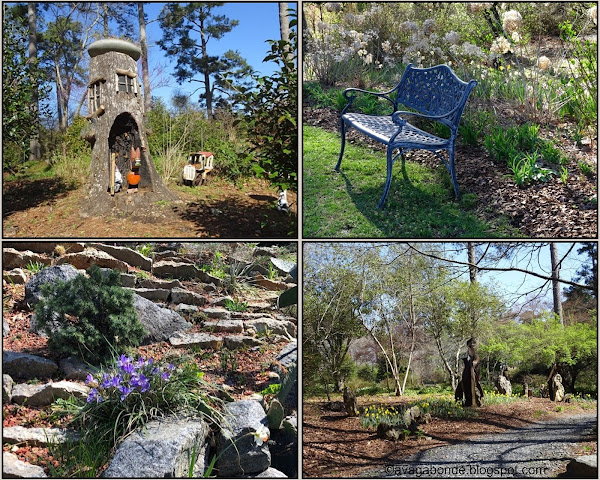 The little stream running into the waterfall was there, lovely still, with many birds flying around. 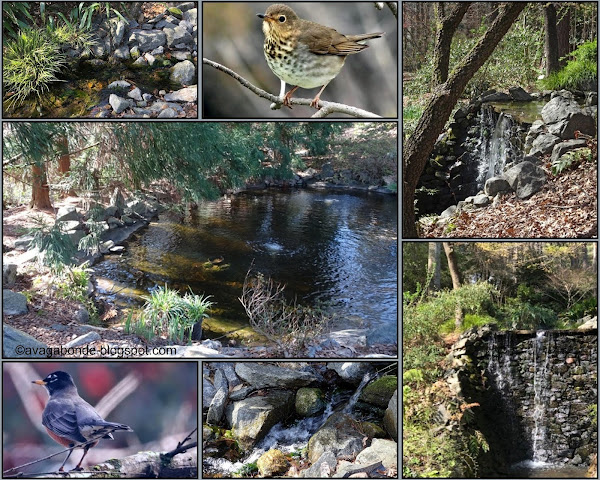 When we had come to the gardens in winter I had seen some camellias blooming, but nothing like the blooms I saw yesterday. Along the path I'd see one bush covered with blooms, take pictures, then there was another one, with more blooms, then another one. Some of them blooming profusely, all of them exquisite. I could not stop taking pictures and wished I had my good cameras with me. 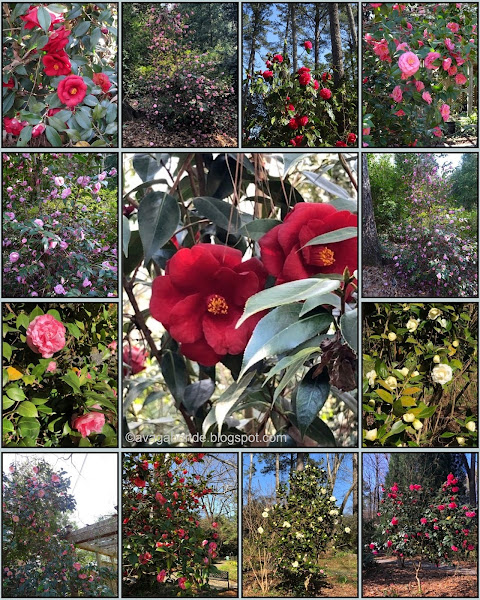 There were a couple of attractive early spring blooming magnolia trees - a tall pink one covered with large petals, 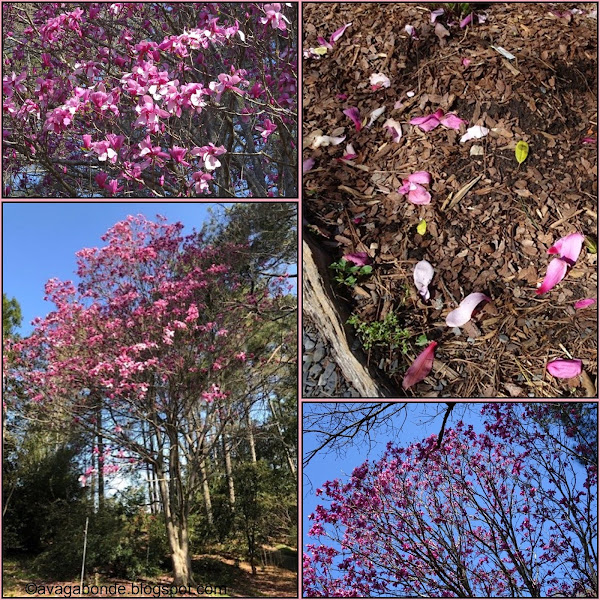 and a white magnolia tree with star-like flowers, a Loebner Magnolia "Spring Snow." I was able to reach a bloom to smell it. It had a lovely scent. 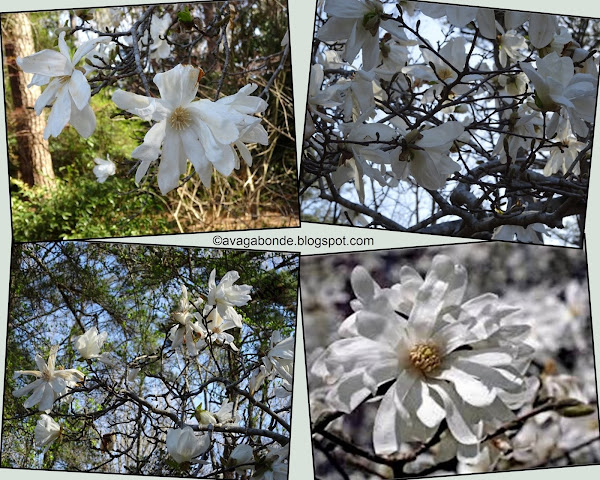 It was a bit early for azalea bushes but some were starting to flower. 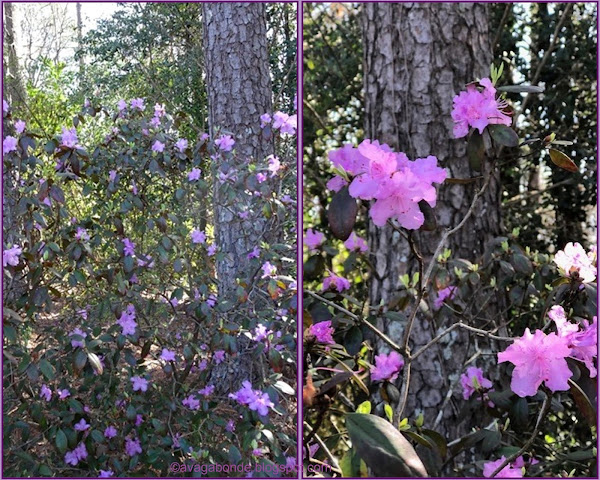 I walked back to the central part of the gardens to sit under blooming trees. 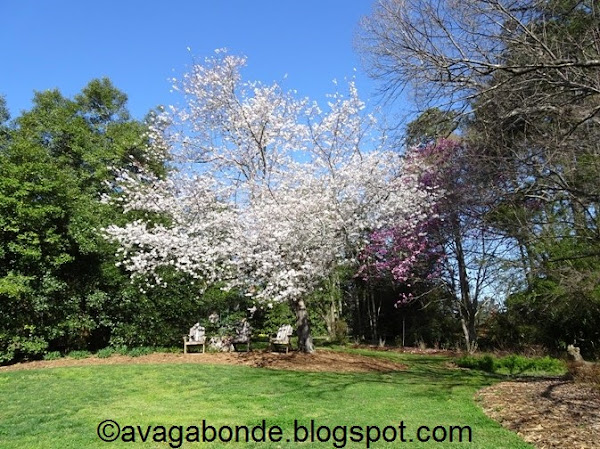 Looking up, it was lovely to only see blooms and blue sky. 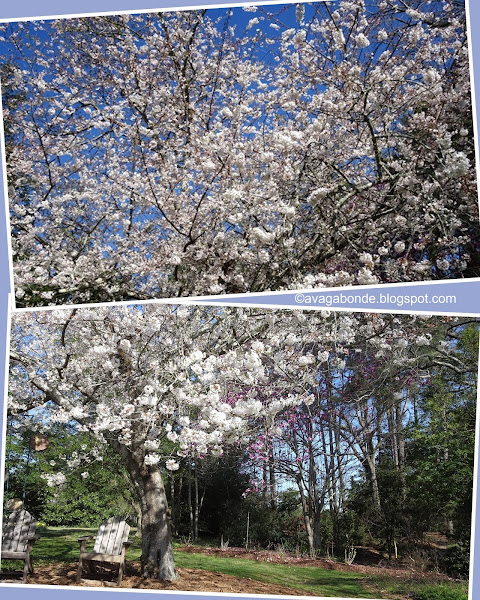 After a while I walked back to some other paths and found ... more camellias! One camellia bush was covered with coral-pink blooms - I mean covered. This camellia is named "Rev. John Drayton" - (in extreme top right corner below.) I checked on the reverend on the Net - and was pleased I did! It turns out that the Drayton family founded Magnolia Plantation by the Ashley River in Charleston, South Carolina in 1676. It was a rice plantation at first then it passed later to Rev. John Drayton who planted camellias japonica and created romantic gardens on the plantation. He also introduced azaleas to the United States and opened the gardens to the public in 1870. Magnolia Plantation is now operated as a house museum and gardens (and still in the same family.) They advertize 1,000 camellia cultivars (some historic) on display from mid-November to April. Goodness, I need to drive there someday. You can read about these gardens here - Magnolia Plantation gardens. 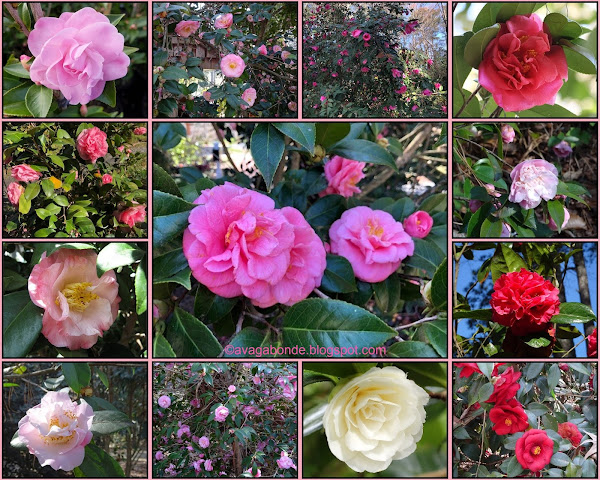 Another tree with delicate pink blossoms was called a Prunus Cyclamin Cherry. 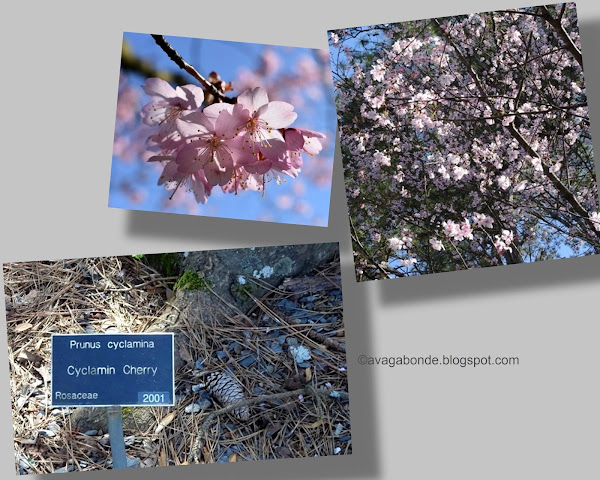 Going back to my car I walked by a blooming bonsai tree, a large tree covered with red berries and a plant with leaves of such a vivid green that they almost looked artificial - it all looked of the new spring. 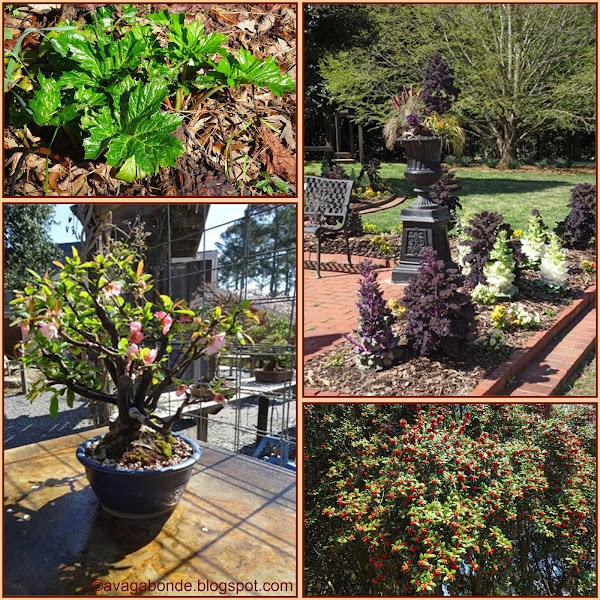 Winter has finally turned into spring. Now with more vaccines and more people vaccinated maybe life with turn back to normal as well. That reminded me of an old song (1965) the group The Byrds used to sing, called "Turn, turn, turn." What a truly lovely interlude. For you, and for us - thank you. I remember the song too - and thoroughly enjoyed listening to it again.

Those magazines are treasured little time capsules and well worth keeping. Who knew that President Kennedy and Princess Diana were going to die so young? And who knew that a good looking Trump would age into a very powerful man with a horrid face?

Beautiful post again. Spring is always full of such colour and hopefulness.
I lost my camellia last year, I will go buy a new one....or two..... for Spring's sake.

It's always wonderful to hear from you and learn that you are getting slowly through all the detritus in your old home. I would love to browse through those old magazines. I love the pink camellias especially. We are in the beginning of flowering out in all sorts of places, it's just lovely. :-)

I thoroughly enjoyed this virtual outing :) What lovely photos of all the spring flowers!

The Smith-Gilbert Gardens look truly wonderful - I think they'd be my favourite place to visit if I lived in the area...although it does seem as if there are some magnificent wild places nearby, too. Some old magazines are very collectable, but I think until eBay came along most people didn't know how to contact collectors. I threw out a huge pile of old magazines commemorating notable events in 2005 when clearing my great aunts house. Childrens drawings are, for me, hard to get rid of, although I don't know why, really.

What wonderful gardens. Good to be able to take a load to the recycle centre.

Wonderful post, Vagabonde! I think I may have mentioned in one of your earlier posts that the magnolia trees with the large white blossoms are called, appropriately enough, magnolia grandiflora and the pinkish-purple ones are magnolia solangiana. Most people in Georgia call the latter “tulip trees” and don’t even realize that they are a variety of magnolia.

The lyrics to “Turn, Turn, Turn” by The Byrds are actually a direct quote (except for the title phrase, which is repeated many times in the song) from Ecclesiastes chapter 3 in the Old Testament. Ironically, they included ‘a time for peace’ but omitted ‘a time for war’....

Ou certainly found a perfect place to spend the beginning of spring. Your photos are lovely.

I have a few of those dreaded boxes in my basement. They have been sitting there unopened for 19 years. One of the boxes contain quite a few copies the last printing of a famous Philadelphia newspaper and I have been asking my husband to get rid of them. We asked our son if he wanted them and he was excited to get them. He had delivered that paper when he was a kid. We looked up their value and if he can get the price that the Internet said they are worth, he will get about $400. Win- win for all of us.

Hi Vagabonde, We (I) used to have boxes of old magazines as well as many old newspapers. I had National Geographic magazines dating back to the early 1920s. I finally dumped everything from 1970 or earlier. As you said, libraries don't want old magazines. I kept the 'older ones' to provide extra reading material covering the 'old' days when I'm in the mood. I just finished one published in 1923. I still have a few historical newspapers and magazines...but not very many. Your photos from the Smith-Gilbert Gardens were a delight as it brings in a rebirth of mother nature's prolific floral beauty and the greenery of Spring! Stay Safe and Take Care, Big Daddy Dave

I have some vintage magazines that were my father's that I treasure more for sentimental value than anything else.
The Smith-Gilbert Garden was beautiful to see! We still have snowy grounds in Colorado so spring feels far away.

Those gardens are fantastic -- so much further ahead than ours are but of course they would be. Love those daffs and all the flowering trees. Stunning.

But what really captured me here were the magazines. Those are so fascinating to look back. I have boatloads of Diana stuff -- I wish I knew people who wanted them. And a very big Brit library. I wish I had the inclination to Ebay some of that stuff but I just don't.

On another note, I received a wonderful postcard in the mail today! But I'll write more about that in an email! Thank you!

Vagabond, these gardens are wonderful. I enjoyed reading and watched long time every photo of camellias.Old magazines are especially valuable - they reflect time. If there are collectors, it is better to offer them magazines. The memory of famous people is very interesting. I liked the song TURN TURN!

Such a beautiful post, gorgeous spring flowers, all so colourful.

All the best Jan

You are so far ahead of us in the season!

What beautiful colours you have shown me in those lovely spring gardens. Pinks, and corals, and reds.... vibrant and lovely! Here in my corner of Canada I'll have to wait quite a while before I see those colours here. But Spring is definitely on the way!
I wish I could have stolen some of your old magazines!!!!!