My husband Jim spent many hours during his high school years trying to figure out how he could homestead in Alaska. A friend of his decided he would go with him, but then they both succumbed to the pressure of going to College. Unfortunately, after college the Government drafted him into the Army for 6 years, and Alaska had to be put off for …. 40 years! While, miles away, I collected vintage postcards from Alaska . 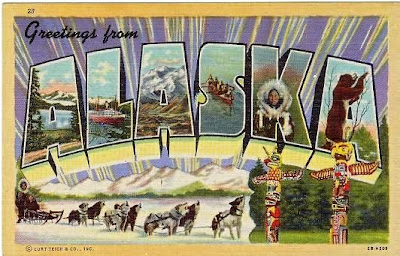 2009 rolls around and a cruise ship company sends us a “two for one” offer to tour and cruise Alaska. So we did. This was our 3rd cruise, after our first one in spring 2008 to Mexico and last winter to the Caribbean on the Queen Mary 2. Since going on a ship to Turkey when I was 5 years old I have always liked that kind of travel and whenever I would go to England from France I would take the longest ferry to cross the Channel, the rougher 4 hour Dieppe-Newhaven ferry crossing instead of the 70 minute Calais-Dover crossing. I came to this country the first time on a big German transatlantic ship and loved it. But while I was working it was hard to take the time to go on a cruise. I was surprised that on a cruise you can really do what you want, eat with people or alone, talk or be by yourself. It’s a good value and you don’t have to lug your luggage around. 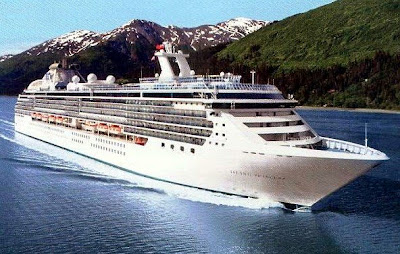 Our trip to Alaska included a night in Seattle, a flight to Anchorage, 2 nights at the Mt McKinley Wilderness Lodge, 1 night at the Denali Wilderness Lodge, a couple of excursions including a visit to the Yucon in Canada, a train ride to Whittier and the 7-day cruise back to Vancouver with stops along the way. I’ll dedicate several future posts to this trip. When we arrived in Seattle about 3 weeks ago, the sun was shining, it was 82 degrees (28 C) and it was the warmest day of 2009. We had a very good view of Mt Rainier from our hotel.

The next afternoon after our 3 ½ hour flight to Anchorage , it looked like it had rained but it was now very sunny. We had a couple of hours to walk around the downtown area. Anchorage , with about 280,000 municipal residents (as of 2007) is the largest city in Alaska . That number represents more than 40% of the entire population of Alaska which was estimated at 683,000 in 2008. (As a point of reference, the greater metro Atlanta area has a population of over 5,626,000.) 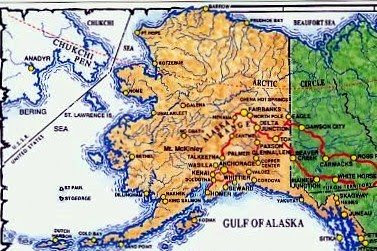 Alaska is much larger than most people realize. It is approximately 570,373 square miles of land and another 45,000 square miles of water. Using the US as a basis of equivalence, Alaska is as large as the entire eastern seaboard spanning north to south Maine to Florida and west to Tennessee, or 20 states combined which include Maine, Vermont, New Hampshire, New York, Massachusetts, Delaware. Rhode Island, Connecticut, New Jersey, Pennsylvania, Maryland, Virginia, West Virginia, Kentucky, North Carolina, South Carolina, Alabama, Tennessee, Georgia and Florida.

As a European equivalent, Alaska is as large as the combined countries of Belgium , France , Germany , Holland , Italy, Scotland and Switzerland. Alaska has ½ the world’s glaciers and 33,904 miles of coastline. 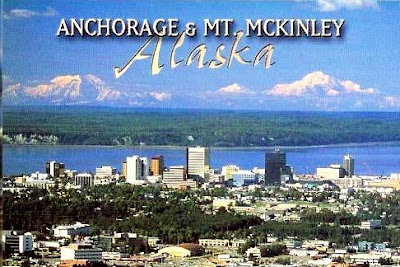 We then took a four hour bus ride to the Mt McKinley Wilderness lodge (shown below) and arrived at 7:30 pm. The sun was still high. It was still light at 11:00 pm when we decided to call it a day. 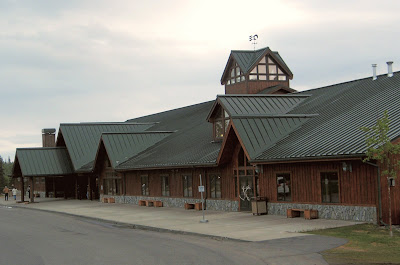 Oh! How wonderful that I am going to go on a virtual tour to Alaska! And you were in our part of the world, too. It's on my list of things to do, so I will be learning from your journey. So far, so good, and I'm looking forward to more.

I lived in the Yukon for six years 35 years ago and explored all of Alaska and the Yukon and have a real hard time going back because I know how much it has changed. I hope your trip was absolutely wonderful and breathtaking...it truly is some of the most beautiful country there is.
Smiles

I am so excited to see your photos from your trip! The vintage Alaska postcard is great. I think they still make some that are similar. Your shot of Mt. Rainier is gorgeous. I used to live in Seattle, and we spend a lot of time there because I have three sons living there and various other friends and family, and also because almost every flight out of Fairbanks goes by way of Seattle. I'm looking forward to your Mt. McKinley photos.

It sounds like a wonderful trip. I wish I had been along. I am looking forward to hearing more.

Nice photos and sounds like you had a great trip.

I grew up in NW Georgia and lived in Anchorage for ten years. My job took me all over the state and it is truly beautiful. I have been from Barrow to Juneau and the Yukon.

The post card has a great view of Anchorage and the Chugach Mountains.

Are they calling the mountain McKinley again, I know it as Denali, which means "The Great One"?
SQ

Found you via Ruth at Synchronizing. We've traveled some similar paths. I spent my elementary school years in Amsterdam and immigrated to San Francisco in 1966 but I never left the Bay Area. I am also an avid world traveler. You have a very interesting blog here.

I drove my motorhome to Alaska with just with my dog for the summer in 1993. What an adventure. what a breathtaking place. I am sure you had an amazing time!
LL

thanks for visiting my blog. enjoyed your trip to anchorage-we are thinking of going there sometime.